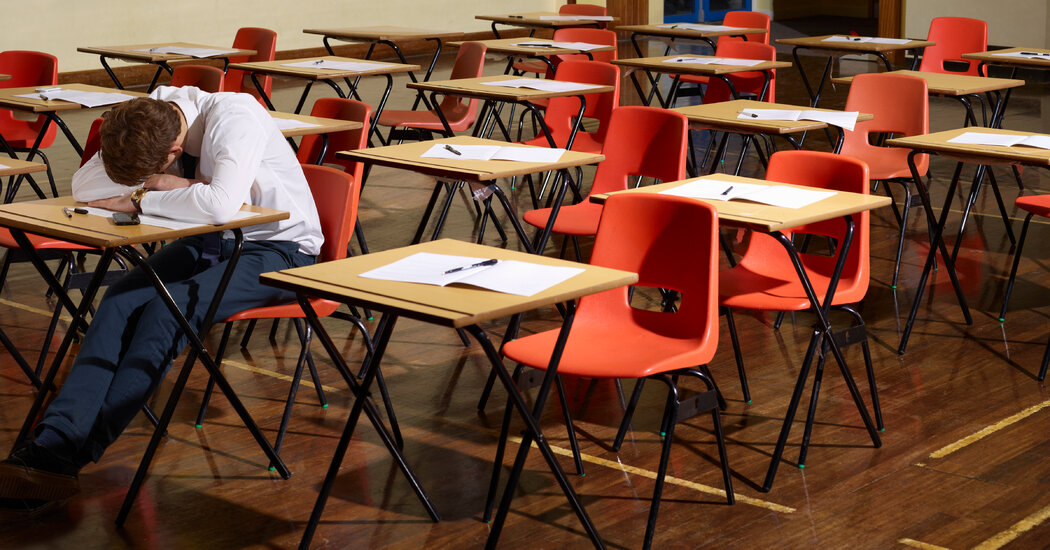 Have you heard of “sleep accounts” on social media that catch students dozing off in class? Why do you think they are popular right now?

Have you ever appeared on a sleep account or other account related to school culture? If so, what were you doing in the photo? How did you feel about it? Have you ever posted a photo of another student doing something unintentionally funny?

In “The Latest High School Prank? It’s a Snooze,” Katherine Rosman writes about the rise of “school accounts,” which catch students dozing off in class, slouching, parking their cars poorly or otherwise being at less than their best for social media fodder. The article begins:

Zach Lewis swears he was just resting his eyes.

But when a fellow student at Stowe Middle High School in Vermont surreptitiously snapped his picture during English class and shared it with the school’s “sleep account,” it was hard to dispute the evidence. There he was, book open, lids shut.

After Zach was tagged in the photo on Instagram, he sent a message to the people who manage the account to remove it. They quickly deleted it. “I wasn’t worried about a teacher seeing it,” Zach, 16, said. “It’s just embarrassing to have it up there.”

But that didn’t stop him from secretly photographing another student who fell asleep in English, then submitting it to the account for publication.

“Everyone,” Zach said, “has been trying to catch each other.”

Part prank, part extracurricular documentary project, sleep accounts are among several types of so-called school accounts that have proliferated on Instagram in recent months, as students have returned to classrooms following two disrupted academic years. After many months of pandemic-mandated remote instruction, teenagers have come to regard such banalities as their classmates eating, slouching and parking badly as fodder for amusement — and, of course, content.

The article — which also quoted Ash Saple, a 17-year-old junior at Hamilton Southeastern High School, in Fishers, Ind. — offers some explanation for the popularity of school accounts, and the intention behind them:

The students behind these accounts say they are mostly a harmless trend, predicated on the novelty of being in the same physical space as their classmates again. There is also a poignancy to the accounts; as many students head out for winter break amid a national surge in Covid-19 cases, there is some uncertainty about whether in-person instruction will resume in January.

“On your computer in your bedroom, you can’t see people napping and you don’t see how badly people park their cars because no one left their house,” Ash said. “There are so many things that you forget about that are just normal things that we’re now able to notice.”

The account that posted the photo of Zach appearing to doze off in class in Vermont is run by two sophomores, Teague Barnett and Andrew Weber, both 15. They had seen on Instagram and TikTok that other students at schools had started slouching and “bathroom feet” accounts.

They decided to create one themselves: a sleep account in which anyone who wished to have their photo removed would be respected. “There is a high school cliché that everyone is falling asleep in class and this account is here to poke fun at that,” Andrew said.

The boys see it as a lark. “A lot of the things that are fun to high schoolers are risqué and things parents wouldn’t be OK with,” Teague said. “But this is a good way to escape and play a little prank and no one is getting hurt.”

Parents seem to agree. “It’s great to have the kids back in school and able to poke fun and have a good chuckle,” said Andrew’s father, Chris Weber. He sees it as a reflection of a generation that has grown up with smartphones and social media, observing and being observed.

“They document their entire lives,” Mr. Weber said. “And they’re very comfortable being seen by their peers at almost any moment.”