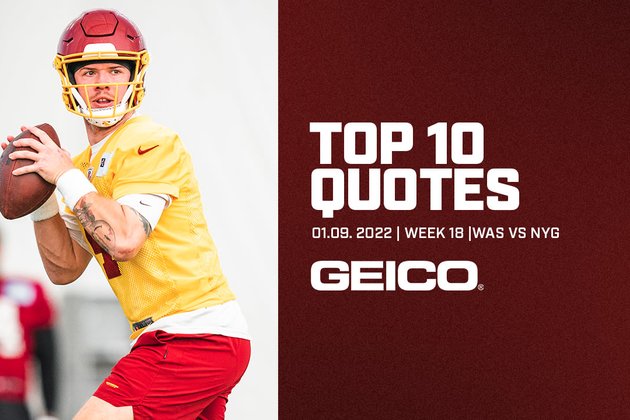 The Washington Football Team will have one last game for the 2021 season against the New York Giants on the road at MetLife Stadium. Here are some of the top quotes from the week, presented by GEICO.

Ron Rivera on what he observed from Leno Jr. this season that may have enhanced Leno’s value:

“The way he effects the other guys around him. He had a tremendous rapport with the other offensive linemen. He had some leadership qualities I thought that were really good, in terms of his relationship with not just the offensive guys, but guys on the defensive side. Those are the kind of guys you want here, veteran guys that have had success, guys that understand what it takes and guys that are gonna do it the way that you need to have it done.”

Jack Del Rio on the biggest things for Chase Young to work on:

“I would think the biggest thing right now is just to get healthy. He came in and saw me a couple days ago. Great to see him, he’s in good spirits. He’s a tremendous player, tremendous person. I know that we certainly want his impact throughout our off season and our off-season’s work. And I think that’ll be an important thing for him and for us to have his presence. He’s just one of those guys, a natural leader, you know, in terms of interactions with teammates and coaches and what not. I think his presence is very valuable.”

Scott Turner on what sticks out to him when looking back on the season:

“It’s hard to say because we had a couple different games. I think I’ve talked about, there’s two that just popped into my head right now because I’ve talked about this I think with you guys a lot that you gotta be able to try to win games different ways. So like the Tampa game, I thought the Tampa game was good because we were balanced. We ended up having a lead. I thought we ran the ball well, even though the numbers weren’t necessarily great. It’s a good run defense. We were able to stay balanced. Going back to early in the season, if you look at the Atlanta game, we didn’t have a lot of possessions. I think like nine total possessions in that game, but we were very productive when we had the ball and we kept the ball and we finished with touchdowns and ended up scoring in the thirties somewhere. I can’t remember exactly. But those were two different games where we kind of did it different ways. Those were good examples of how we’d like to play and execute offensively.”

Taylor Heinicke on what he has learned about himself this season:

“I don’t think it’s something I learned. I kind of reaffirmed that. I just feel like I’m a resilient guy, um, you know, not playing and still working. And then a lot of, again, a lot of the stuff going on this year, whether it’s good or bad, kind of just sticking to it, grinding through it. That’s for everybody on this team too. There’s a bunch of resilient, bunch of resilient guys, and they just want to go out there and play football and fight. I wouldn’t wanna play with any other group of guys. That’s probably the biggest things I learned this year. There’s gonna be ups and downs. It doesn’t matter what team you’re on and it’s just how you deal with those things. Maybe I could have dealt with it a little bit better, who knows, but again, it is something I’ve learned throughout this year.”

Ron Rivera on using the next game as an opportunity to look deeper into the depth chart:

“I think that’s one of the things that we talked about today as a coaching staff was, Hey guys, we want to try and go out and set a tone early on and see what happens. But at some point, just understand, we’d like to see some guys and if there’s guys that you want to see specifically, make sure we plan that out and we map it out, we go out and do it. I mean you want to go out and win, you really do. And you want to play to win, but you also want to play for the future. So, we are going to set ourselves up, you know, see what happens and try and set some sort of tone and temple early on, and then we’ll go from there.”

Jack Del Rio on what this year revealed the most about the defense:

“I think Taylor’s definitely going to be a factor. I think that it’s been a up and down year. I think there’s been some games where it’s been good, and then there’s some games that it hasn’t been as good. I think you can say that for our entire offense. I’ve talked about this before, the quarterback gets the majority of the credit when it goes good and he gets the majority of the blame and probably neither one of them are fair. It’s the most important position in the sport and we aim to be as good as possible there. Whoever, if we do bring a guy in, if that happens and however that happens, Taylor’s gonna be here. I know what his makeup is. I know he’s gonna be ready to compete and he isn’t gonna give anybody anything. We’re gonna evaluate everything after this game. We’re gonna try to get it as good as we can at every position, but especially at that position.”

Taylor Heinicke on what he has proven as a player:

“Well, one checkbox I’ve checked was the whole durability question. No one really thought that I could go 16, 17 games and here we are. So that’s a positive. Another thing too is again, I never started this league and you just don’t know if you could ever play in this league until you’re in it for a while. I feel like there’s some good things I put on tape and obviously there’s some bad things. When you learn from those bad things, you try and eliminate as many as you can and go from there. There’s a couple check boxes that I like to. And there’s also some that are still kind of up in the air that I wanna work on this off season.”

Ron Rivera on what he saw from Wes Schweitzer this season:

“We saw a very stout, physical football player play with a little bit more confidence and I think feel and understanding of what we were doing offensively. You really saw that and that’s why his loss was a big loss as well, as far as positional value. He plays guard and center and he was technically our third center. And playing well at that point and had played some guard for us this year. So, his value is really as to who he is as a football player is the way he plays and that’s physical.”