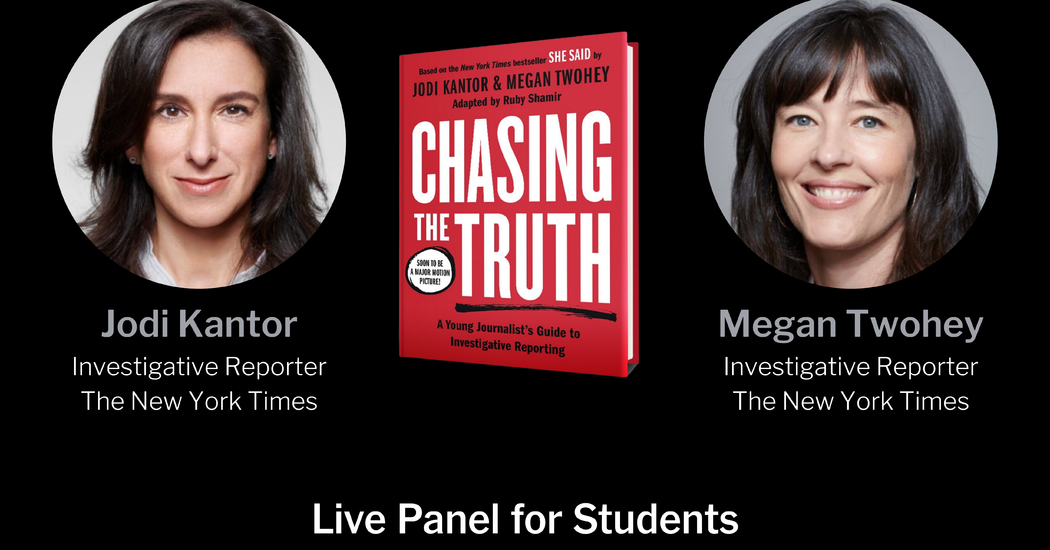 Register for the live student panel at 1 p.m. Eastern on January 27.

In “Chasing the Truth,” their new book for young people, Ms. Kantor and Ms. Twohey share the methods behind their reporting process as a guide for aspiring journalists. They argue that you don’t have to be a New York Times journalist to conduct investigations that reveal the truth and make a difference in your community.

Ms. Kantor and Ms. Twohey will speak directly to students about investigative journalism at our live panel on Jan. 27. We recommend that classrooms prepare for the panel with the two teaching resources below, which include excerpts from “Chasing the Truth.” We also encourage students to submit video questions by Jan. 20 that may be played during the panel.

Prepare for the Panel

Before viewing the panel, we ask teachers and students to use one or more of the following resources, each of which features an excerpt from the book, “Chasing the Truth.”

What questions do you have for Ms. Kantor and Ms. Twohey? Submit a video through this form by 11:59 Pacific time on Jan. 20, and we may play it during the panel. Each video should be no longer than 30 seconds.

Students are also invited to submit a short video sharing what they would like to investigate and why. Learn more in our Student Opinion question.

Get to Know the Panelists

For their work on Harvey Weinstein, which helped to shift attitudes, and spur new laws, policies and standards of accountability around the globe, Ms. Kantor and Ms. Twohey, together with a team of colleagues who exposed harassment across industries, were awarded the Pulitzer Prize for public service, journalism’s highest award. They also received or shared in numerous other honors, including a George Polk award and being named to Time magazine list of 100 most influential people of the year. “She Said,” the book Ms. Kantor and Ms. Twohey wrote recounting the Weinstein investigation, was called “an instant classic of investigative journalism” by the Washington Post. “Chasing the Truth” is a young readers’ adaptation of that work.

But before they broke the Weinstein story, both journalists had done extensive reporting that has helped to spur societal change. Jodi Kantor’s article about the havoc caused by automated scheduling systems in Starbucks workers’ lives led to changes at the company and helped spark a national fair-scheduling movement. After she and David Streitfeld investigated punishing practices at Amazon’s corporate headquarters, the company changed its human resources policies, introducing paternity leave and eliminating its employee ranking system. And Ms. Kantor’s report on working mothers and breastfeeding inspired two readers to create the first free-standing lactation suites for nursing mothers, now available in hundreds of airports and stadiums. Ms. Kantor has also done extensive reporting on Barack and Michelle Obama, and her best-selling book “The Obamas,” about their behind-the-scenes adjustment to the jobs of president and first lady, was published in 2012.

Megan Twohey has reported on Donald J. Trump, helping to reveal allegations of sexual misconduct against him, his business interests in Russia and illegal efforts to silence two women who claimed they had affairs with him. She exposed an underground network where parents gave away adopted children they no longer wanted to strangers met on the Internet in a practice known as private re-homing. The series, “The Child Exchange,” showed how the dangerous black market took place with no government oversight and at great risk to children, and was a finalist for the 2014 Pulitzer Prize for Investigative Reporting. Ms. Twohey was one of the first journalists to expose how police and prosecutors were shelving DNA evidence collected after sex crimes, robbing victims of the chance for justice. In response to her stories, Illinois passed the first state law mandating the testing of every rape kit.