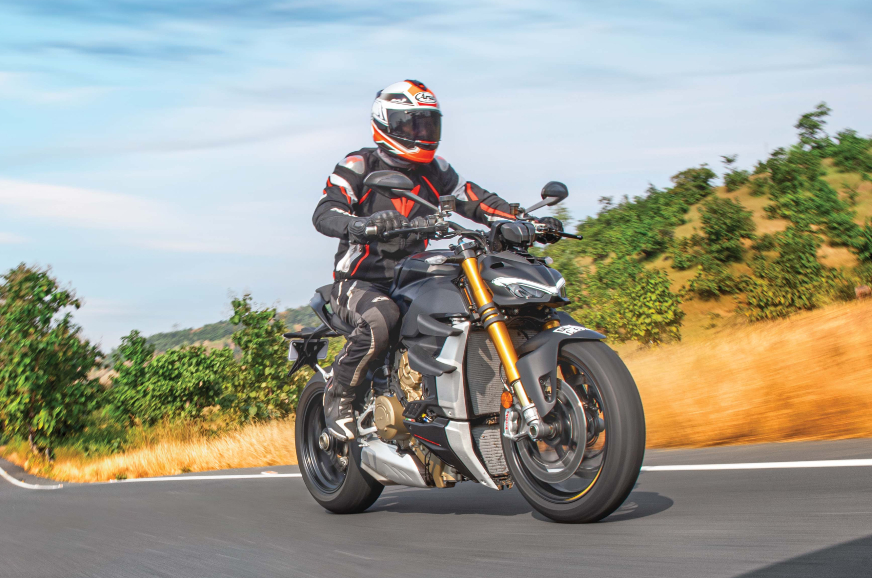 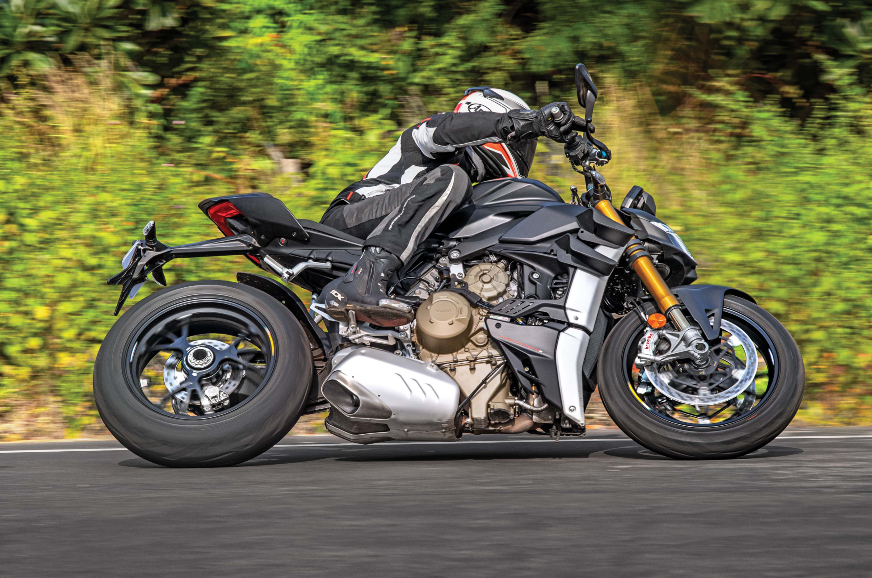 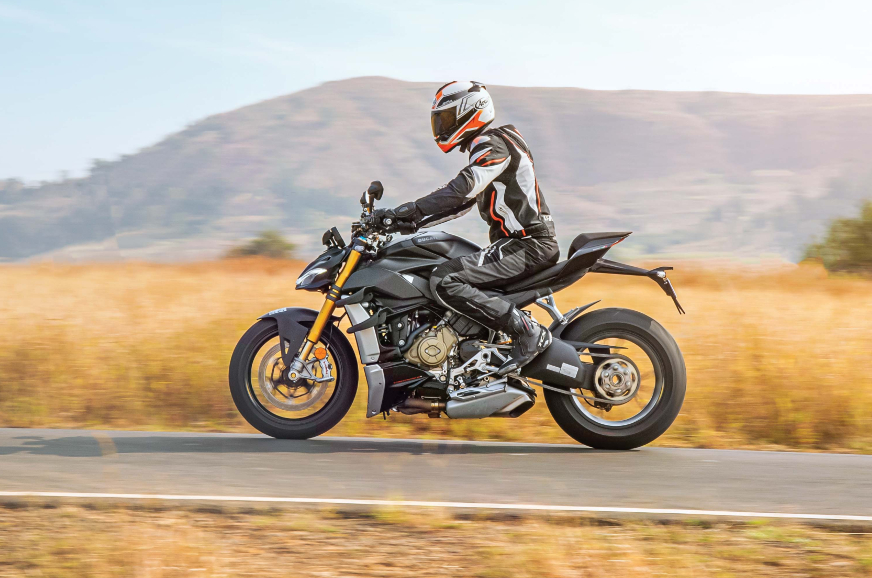 The 208hp/199kg Streetfighter V4 S looks absolutely bonkers on paper. We find out what it’s like in reality.

Ducati’s catchy tagline for the new Streetfighter V4 is ‘the fight formula’, but after observing the highlights of the spec sheet, I found myself muttering, ‘They should have called it the fright formula.’ With 208hp, this is the world’s most powerful production naked bike (on par with the MV Agusta Brutale 1000RR), and it packs a power-to-weight ratio of 1,045hp/tonne. That with no wind protection and the steering leverage of a wide handlebar… Good lord.

It’s not as if the bike looks like some gentle, approachable thing either. We’re riding the higher-spec S model, which comes in this mean shade of matte black called Dark Stealth. With those big bi-plane wings sticking out the side, the Streetfighter looks wicked, and not in the neo-cool way the word is now thrown around on social media. It’s the motorcycling version of a heavyweight MMA fighter that will beat the living pulp out of you if you so much as look at it funny. The bike arrived at my house the night before our first day out shooting and I recall the few hours of sleep that followed not exactly being the most peaceful I’ve ever had.

Previous experience with this engine in the Panigale encouraged me to walk the bike well out of my society the next morning before firing it up. There was a possibility that the now Euro 5/BS6 compliant engine might be a little quieter, but no. Thumb the starter button and the 1,103cc V4 explodes into life before settling into one of the loudest idles I’ve heard on an emissions-compliant motorcycle. As the engine built some heat, a minute or two were spent fiddling through the easily navigable menus looking for the kindest of the three riding modes. With the bike set in Street Mode, off we tentatively set.

Ten minutes down the familiar road out of the city, I found myself thinking, ‘Wait a minute, this feels really docile!’ With the peak power restricted to 155hp in the lower of the three power modes, the Streetfighter is even more mellow than the smaller Panigale V2, which makes the same amount of power. That’s probably because the SF’s 155hp in this mode arrives much higher in the revs than the V2, but nevertheless, ten minutes in, I was ready for the full 208hp.

Switching to Sport mode makes a dramatic change. You now have full power with not only far more reactive responses to the throttle, but the Öhlins Smart EC 2.0 electronically controlled suspension also firms up a fair amount. But surprise, surprise, the bike is still quite usable, even if you now have to be far more cautious with your inputs. Eventually, some open roads present themselves and it’s time to experience what 208hp on a naked bike feels like.

By the time you cross 8,000rpm, things start getting seriously fast and you need to lean over the handlebar, not just to fight the wind, but also because it feels like the bike is trying to leave you behind. And then you realise that you’ve still got nearly half the rev range left… Screaming past the ten thousand mark and finally to 14,500rpm is a frightening yet life-reaffirming experience that will put anything short of a hyper car to shame. It’s just unreal how fast this bike can be, but what I found myself even more amazed by is how Ducati has made this literal bomb of an engine feel… usable.

You’d expect this to be a demonic wheelie machine, but somehow, it just hooks up and drives forward from second gear onwards. Ducati has achieved this by limiting the torque in the first four gears, giving this bike the latest generation 8-level wheelie control and also extending the wheelbase by 19mm over the Panigale. Those wings must surely be doing some work as well – Ducati claims 27kg of weight over the front wheel at 270kph. And finally, this engine has a counter rotating crankshaft which also helps in this regard.

The motor is also shockingly smooth for a Ducati. It’s still not turbine smooth at low rpm like an inline four, but it’s miles better than any V-twin Ducati out there and you can actually go as low as 50kph in 6th gear.

Factor in the riding position, which is still very sporty but nothing like the brutal Panigale, and you have something that’s far easier to live with on our roads. Of course, it’s still a high strung, extreme-performance machine, so there are some compromises you’ll have to live with.

First off, the 845mm seat height is even taller than the Panigale’s because this bike gets a more thickly padded seat that’s actually pretty comfortable for what the bike is. Then there’s the heavy clutch that’s also quite grabby at city speeds. The awful superbike-style turning radius is a pain as well, but most of all, there’s still plenty of heat for you to deal with.

The Streetfighter runs very warm at all times, even if there’s no traffic around. The engine has a clever cylinder deactivation technology that cuts off the rear bank of cylinders at idle, but things can still get seriously hot if you’re stuck in a heavy traffic jam. That being said, like most Ducatis, its cooling system does a superb job of managing the heat, and the challenge is basically down to whether the rider can bear it.

It also has a thirst for high octane fuel and if you ride it hard enough, the efficiency can drop into single digits. At this point, you’d realise that the bike has no fuel gauge and all you get is a low fuel warning light. We found that it ran beautifully on 100 octane fuel which costs about Rs 160 per litre. Fun.

Then again, it’s a similar, if not worse story with the Panigale and like with that bike, you put up with these hassles for the incredible way it rides. This bike runs the same front frame chassis as the Panigale V4 and since we have the S model here, it gets the same electronically controlled suspension. Essentially, this suspension electronically controls the damping forces based on the road surface and what mode you leave it in. You can either leave the suspension to dynamically adjust itself in real time, or if you really know what you’re doing, you can select the fixed mode where the compression and rebound damping settings can be manually set up.

The suspension does an amazing job of being sporty, but never overwhelmingly stiff or harsh, no matter the riding mode. As for bad roads, of course you need to be careful, both with the rims and the low 121mm ground clearance. But with a cautious approach, the Streetfighter got us through the usual speed breakers and broken roads that are so generously spread all around.

On the occasion that you find smooth and winding tarmac, the handling feels very serious and high-level. Direction changes are not super sharp, but the level of feel and control from the front-end is exactly what you’d expect from a top-tier superbike and the Streetfighter rails around corners with incredible confidence.

There were a couple of moments where the rear felt a little soft through some bumpy corners, even in Race mode, but this can probably be dialled out if you spend time in the suspension settings menu. Like the Panigale, the Streetfighter’s handling talents feel far above what you can exploit on the road and there’s no shaking the feeling that you aren’t even scratching the surface of what this bike can do.

That being said, it is a much more enjoyable ride on the street thanks to the extra comfort. Even though this bike gets Pirelli Rosso Corsa 2 tyres against the Panigale’s Supercorsas, these tyres are incredibly grippy and full of feel. Thankfully, the Brembo Stylema brakes are exactly what you get on the faired bike and are pretty much the best brakes I’ve experienced. 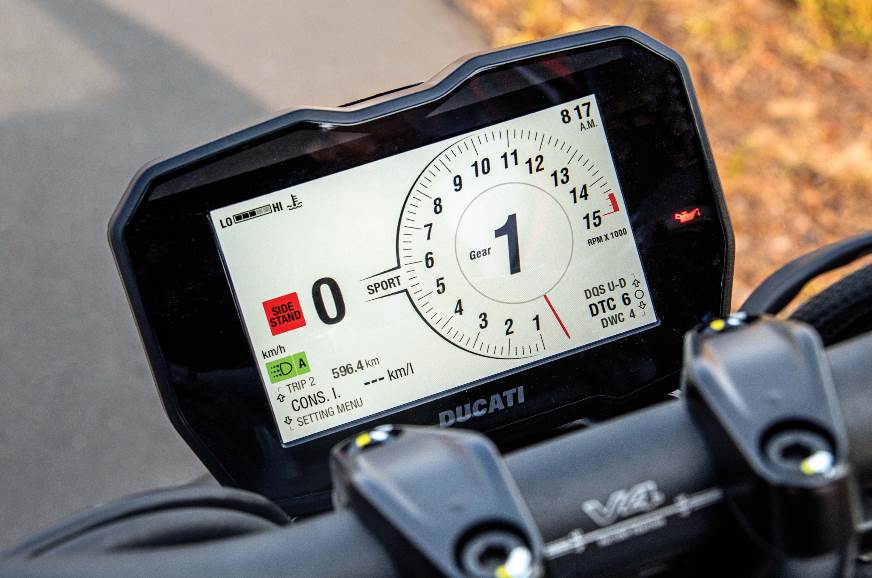 It’s a similar story with the huge electronics package that comes straight off the Panigale, including the TFT screen. Riding modes, Power modes, Launch control, Engine brake control, Slide control, traction control, this bike has it all, and honestly, it’s these incredible electronics that make it possible for such mental motorcycles to even exist in the first place.

Naturally, with its insane performance, top technology and sheer Italian exotica, this bike commands a pretty hefty price. The standard Streetfighter V4 costs Rs 20 lakh, ex-showroom, while you have to shell out Rs 3 lakh more for the V4 S you see here. The extra money gets you Öhlins electronic suspension and steering damper, lighter forged aluminium wheels and the exclusive stealth black paint. Sure, that’s a lot of money, but this is a lot of motorcycle. I think what I’m most impressed by is that this bike never tried to kill me. What I thought would be frightening actually turned out to be fun and satisfying, even when you aren’t chasing the stratospheric redline.

I didn’t really enjoy riding the Panigale on our roads, but the Streetfighter V4 is another story. It may not be as drop-dead gorgeous and certainly won’t protect you from the wind, but in every other way, this bike lets you enjoy the full Panigale experience on the road, without most of the pain. And that’s an incredible achievement.