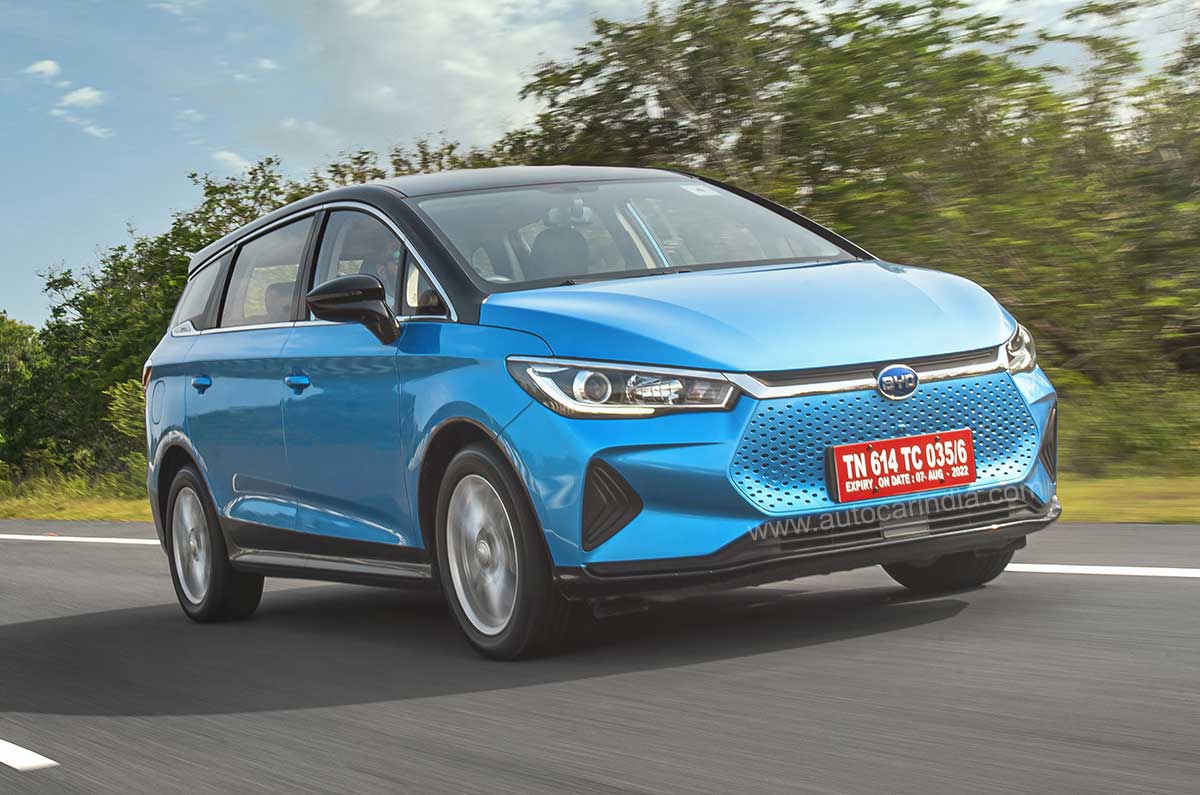 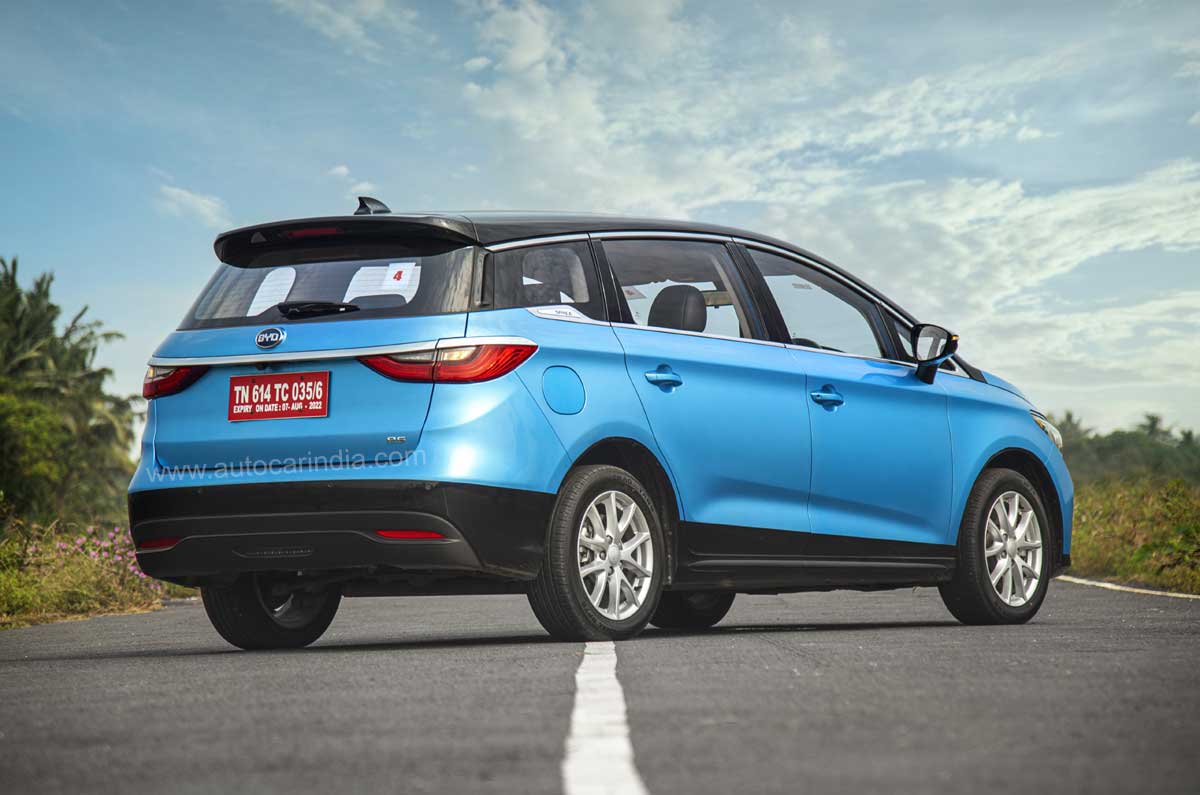 It’s an electric MPV with over 500km claimed range; however, it’s currently only available to commercial buyers.

BYD (Build Your Dreams) is not a household name in India, but internationally, it is a huge player in the areas of tech, electronics and EVs. The eagle-eyed among you would also have spotted the BYD electric buses that have been plying on Indian roads since 2017. However, they are now looking to enter the passenger vehicle segment and their first shot at it is with the e6. Here in its second generation, the all-electric MPV is designed to seat five in comfort, have plenty of space for their luggage and have a range of over 500km (claimed). With the e6, BYD aims to bring its expertise in commercial and consumer EVs to the mass market. However, there is a caveat, this electric MPV is currently only available to commercial fleet operators. Which means you would require a commercial driving licence to get behind one. But what got us to go all the way to Chennai, was its claimed range of over 500km on a single charge.

Looking at the new BYD e6, there is no mistaking it for anything but an MPV, with its teardrop-esque silhouette. However, BYD has given the new e6 some nice design touches like the unique nose styling with small hexagonal cut-outs in place of a traditional grille – which the brand says uses its ‘Dragon Face’ design language – the slick, swept back headlights with LED DRLs, and the neatly styled LED tail-lights. On the whole, BYD has kept the styling fairly contemporary and minimalist, if not a touch conservative, with only the strong shoulder line and kink in the rear window line giving it some personality. Even the dual five-spoke, 17-inch alloy wheel design is a bit sedate. However, given the target audience for this electric MPV – commercial fleet operators – this understated design likely fits the bill better than a more flamboyant look. 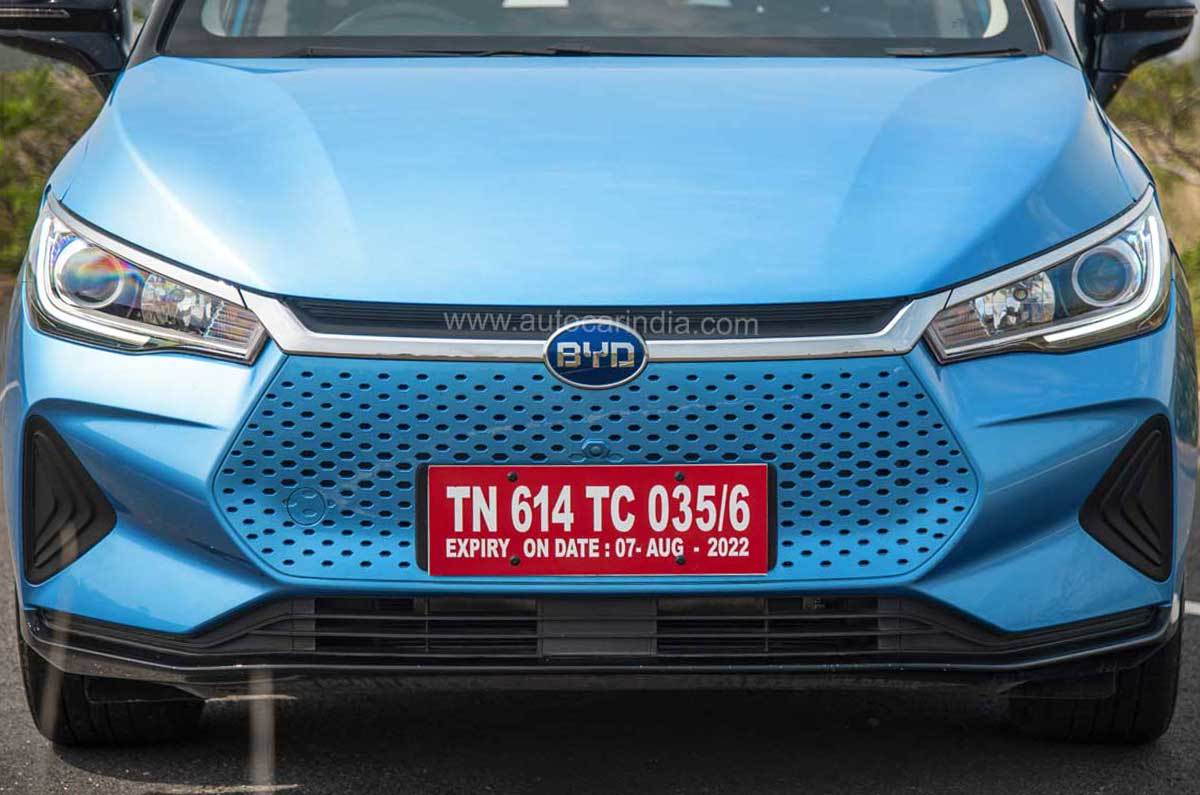 Step inside and you’ll be greeted by a neatly laid out dashboard that has a free-standing 10.1-inch touchscreen infotainment system taking centre stage. It is largely devoid of any physical buttons as all the climate controls are incorporated into the touchscreen. The only physical buttons are positioned on the centre console and they control the drive modes (more on this later), regenerative braking and hazard lights. Speaking of the touchscreen infotainment system, it is a responsive unit and its Android-based operating system and onboard Wi-Fi allow it to use applications from the App Store – like Gaana and Google Maps. Unfortunately, this touchscreen does not have Apple CarPlay or Android Auto support, which is acceptable given the apps it does support. What this screen does have is a pretty neat party trick – it can be rotated 90 degrees to make it a portrait-oriented screen. In portrait mode, the screen can display more information in apps like Google Maps and is more intuitive to navigate for smartphone users, though it does come across as a bit of a gimmick. Other features include an informative 5.0-inch coloured MID, tilt and telescopic steering wheel adjustment, steering-mounted media controls, keyless entry and go, tyre pressure monitoring system (TMPS), CN95 medical grade air filtration system, and rear parking camera. 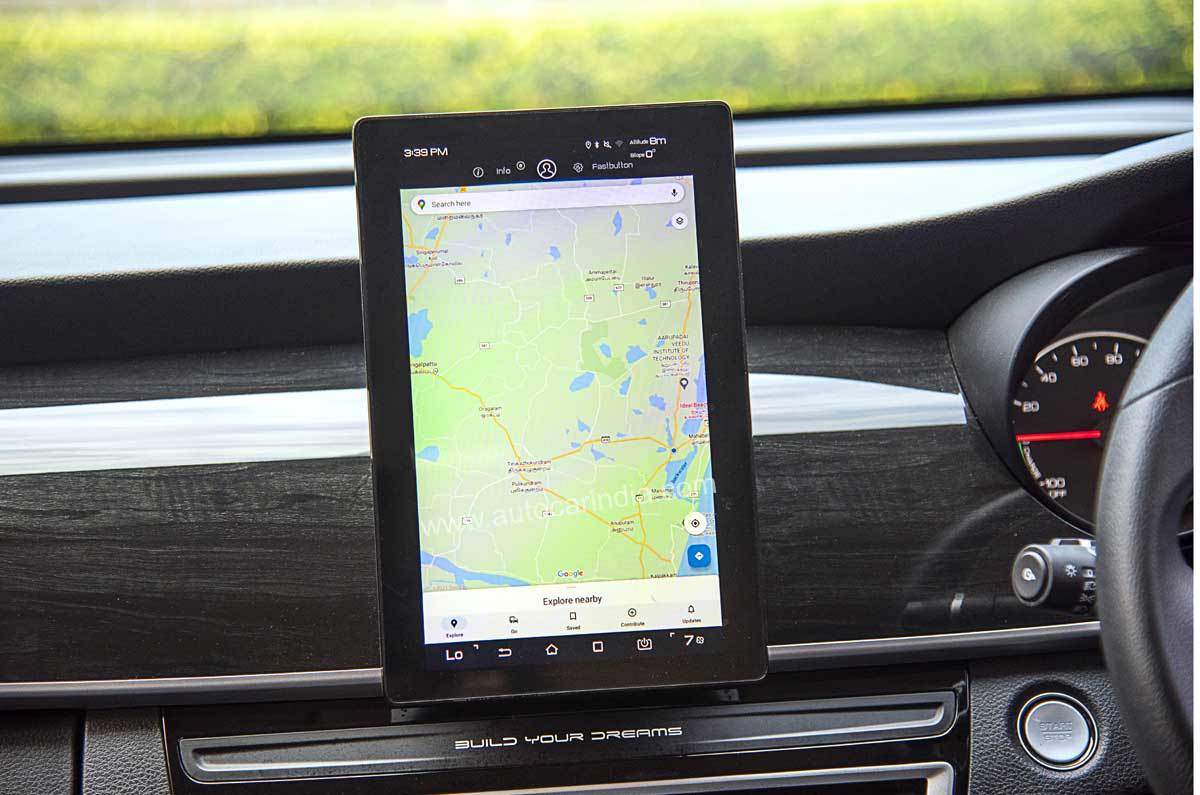 Both the front seats have six-way manual adjustment and are very well cushioned. However, the lumbar support is a bit too excessive, the material used isn’t very breathable, and taller drivers might find the under-thigh support lacking. 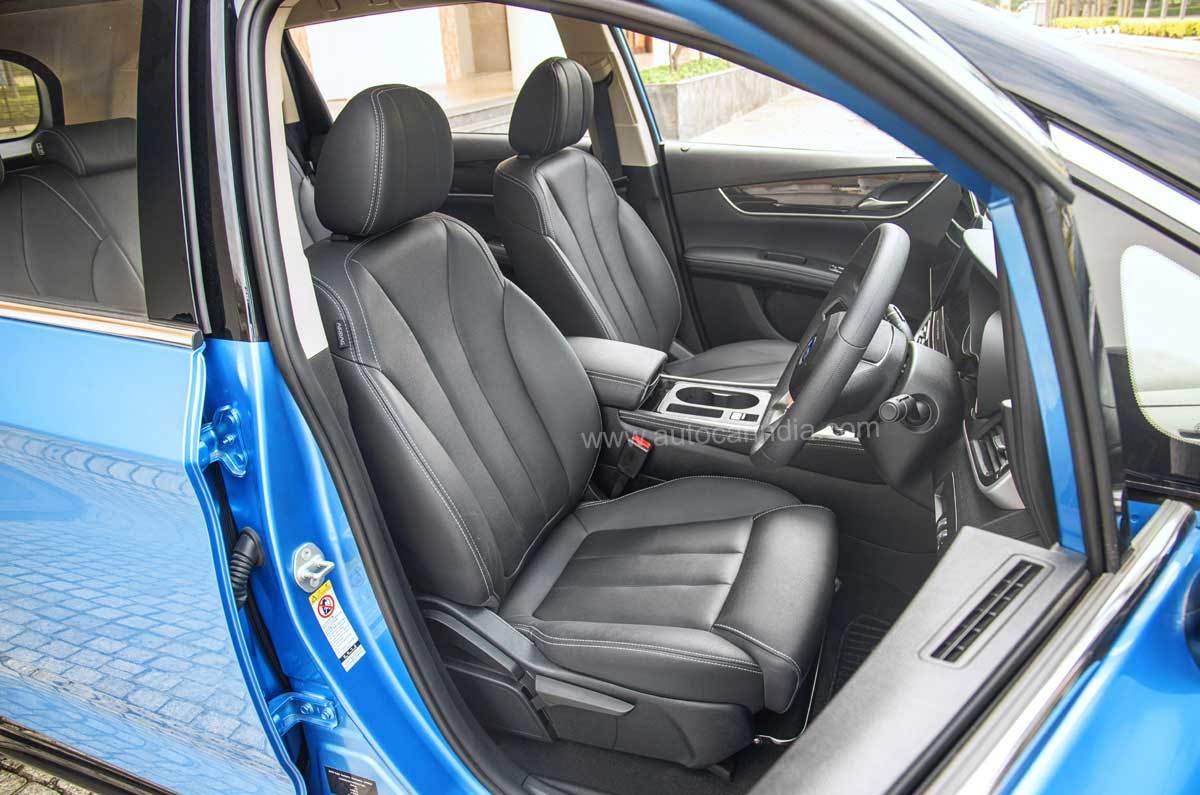 Another slight drawback is the excessive use of hard plastics all around the cabin, and while the subtly textured high-gloss inserts in the dashboard and door cards look nice, they are prone to showing scratches and fingerprints easily. 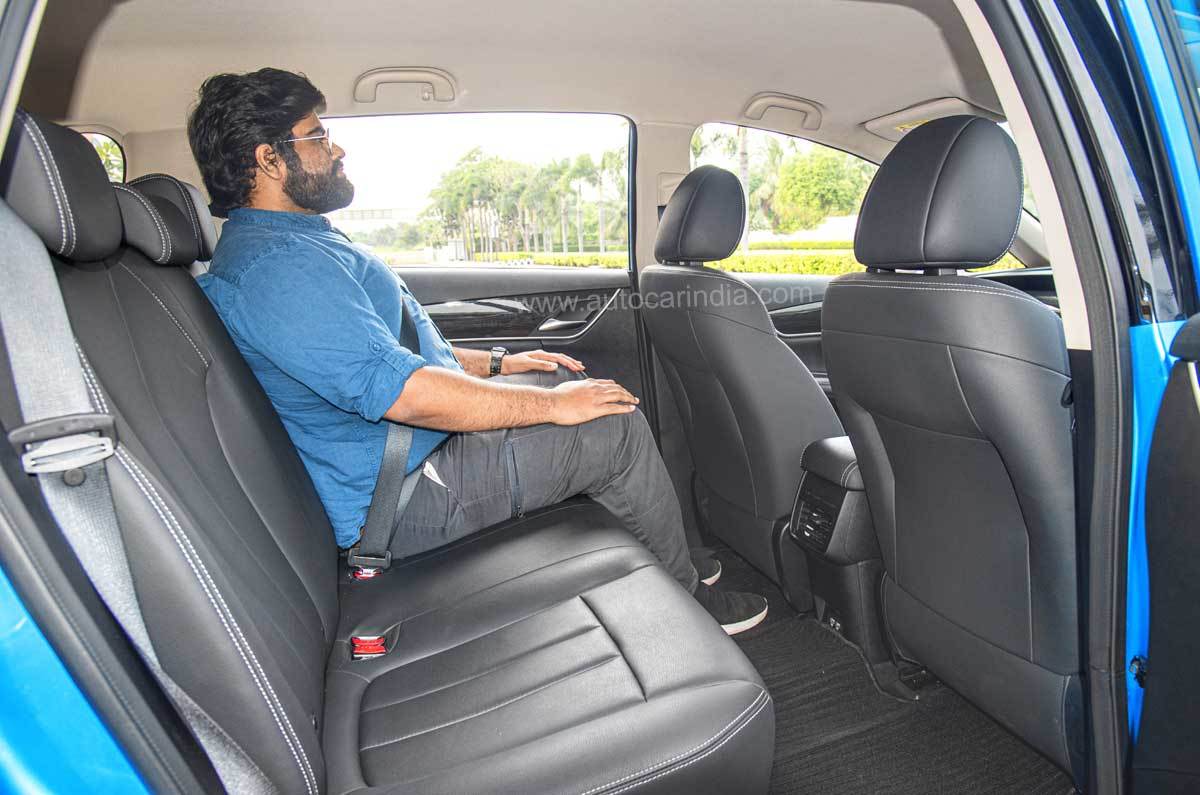 The rear seats are quite comfortable, with soft cushioning on the seats, generous amounts of knee room (courtesy of the long 2,800mm wheelbase) and headroom, a flat floor, and unlike many EVs in the market, the seating position is not very knees up. While the rear seatback position is not adjustable, its standard level of recline is comfortable enough. The door bins in the rear are decently practical, though access is difficult. Also, there’s just one rear AC vent for rear passengers. What’s come across as odd in a car that is primarily designed to ferry rear seat passengers in comfort is the lack of more AC vents on either the B-pillar or roof, as well as no rear centre armrest; also, there is no storage in the front seatbacks. What can’t be faulted is the boot space on offer, as BYD has managed to eke out a cavernous 580 litres of space. According to the carmaker, this is enough for four large and one small cabin bag size suitcase. Additionally, given the flat floor and squarish shape, the space available is very usable, and there is even enough space below the boot floor for a space saver spare wheel and basic tools. 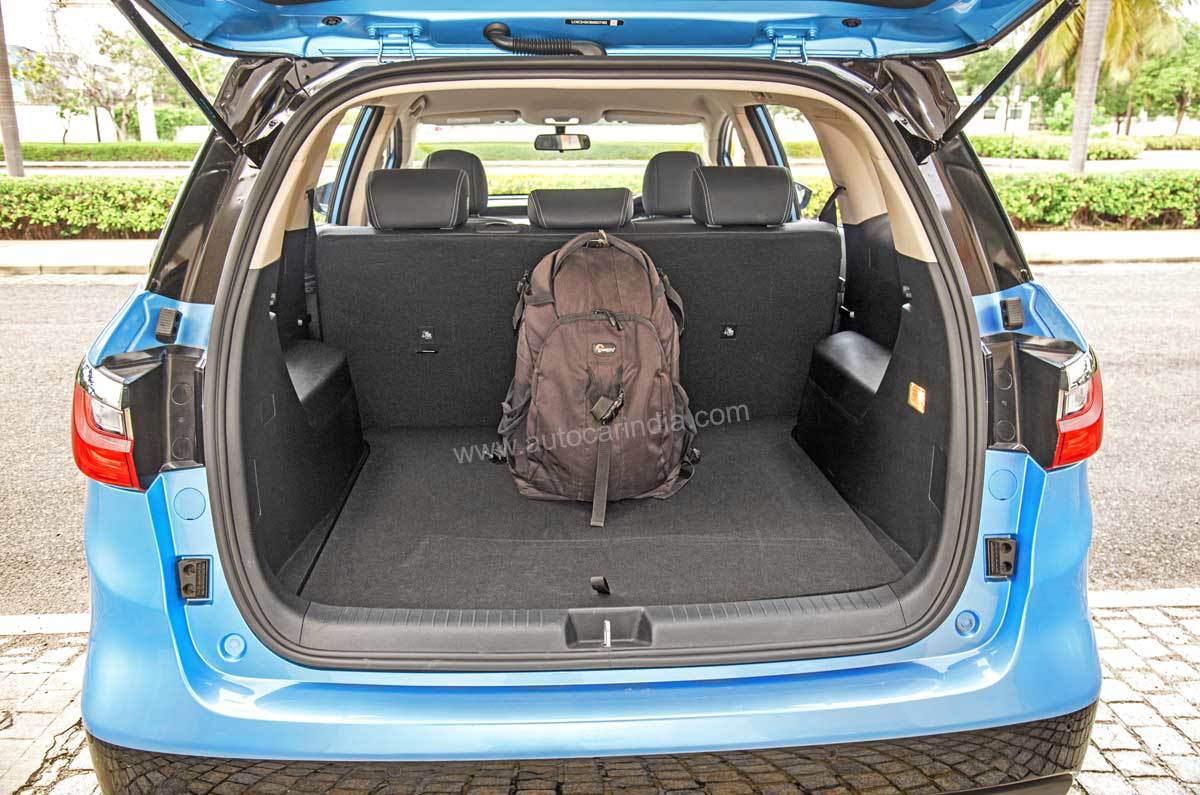 For the new e6, BYD has used its in-house developed Blade battery technology, which it claims is one of the safest batteries on the market. BYD’s confidence in the Blade battery’s safety standard is not unfounded, as it comfortably passed its internal safety tests, which includes the nail penetration test, with no signs of fires or explosions after impact, the overcharging to 260 percent test, the extreme heat test (battery heated up to 300degC), as well as the crush test and bend test. 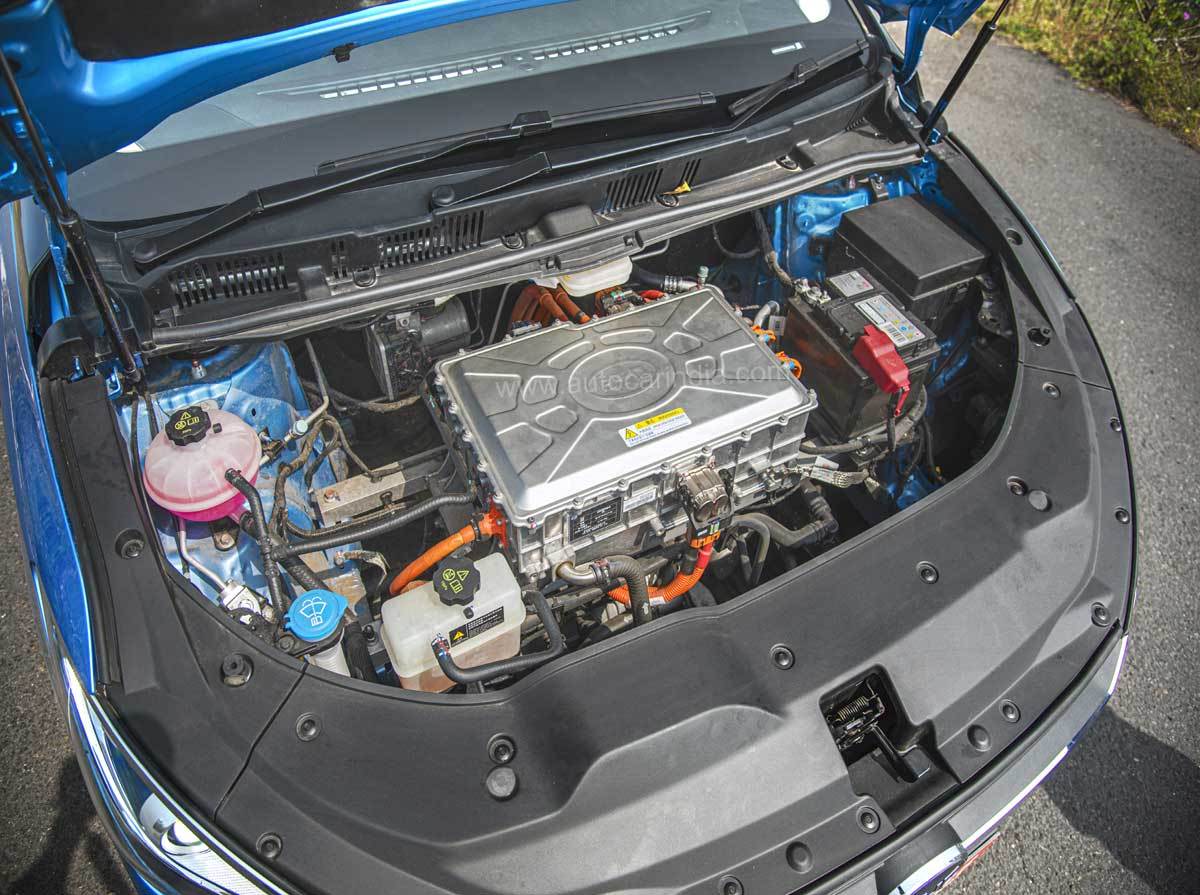 The e6 eMPV features a 71.7kWh battery pack that powers a single electric motor developing 95hp and 180Nm. On a full charge, the e6 has a claimed WLTC (not to be confused with the more stringent WLTP test cycle) range of 520Km in the city and 415km on the highway. While this number is great on paper, what’s more impressive is that in the real world, the range we got was actually remarkably close to the claimed one. We drove the e6 for roughly around 150km in varied conditions, including city roads and highways. When we ended our day, the onboard computers said there was around 320km of range left, and this number could easily be higher, if driven more efficiently. However, we will have to wait for the BYD e6 to be tested to Autocar’s test standard for a more accurate range.

In terms of charging, the BYD e6 can use a 60kW DC fast charger that take just 90min to give a full charge, a 40kW AC wall-mounted fast charger that can give a full charge in two hours, and a 6.6kW AC slow charger that will take roughly 12 hours for a full charge. Interestingly, the only difference between the two trim levels available is that the base GL trim can only be charged by a DC fast charger, while the more expensive GLX trim adds AC fast and slow charging support. Besides this, all the features across both trims are identical. BYD has done this after interacting with a number of fleet buyers, who after testing the eMPV have said they don’t need the slower AC charging function as that would ground the car for a longer duration, missing out on potential trips.

On pulling away from a standstill, you’ll notice the MPV gets off the line very smoothly, despite the fact that electric motors do provide instant torque. This is down to the way BYD has tuned the motors, with more emphasis on linear power delivery, seeing as the e6 will primarily be chauffeur driven. At city speeds, the e6 feels quite peppy, making it easy to manoeuvre through openings in traffic. However, while moving at speeds below 30kph, there is a constant hum for pedestrian safety, which can get quite annoying, especially in bumper-to-bumper traffic. Its steering is nice and light at slow speeds, but it requires too many turns, lock to lock, and this somewhat hinders its manoeuvrability in the city. The steering also has a Sport mode, which adds some more heft to it, especially as you gain some speed. 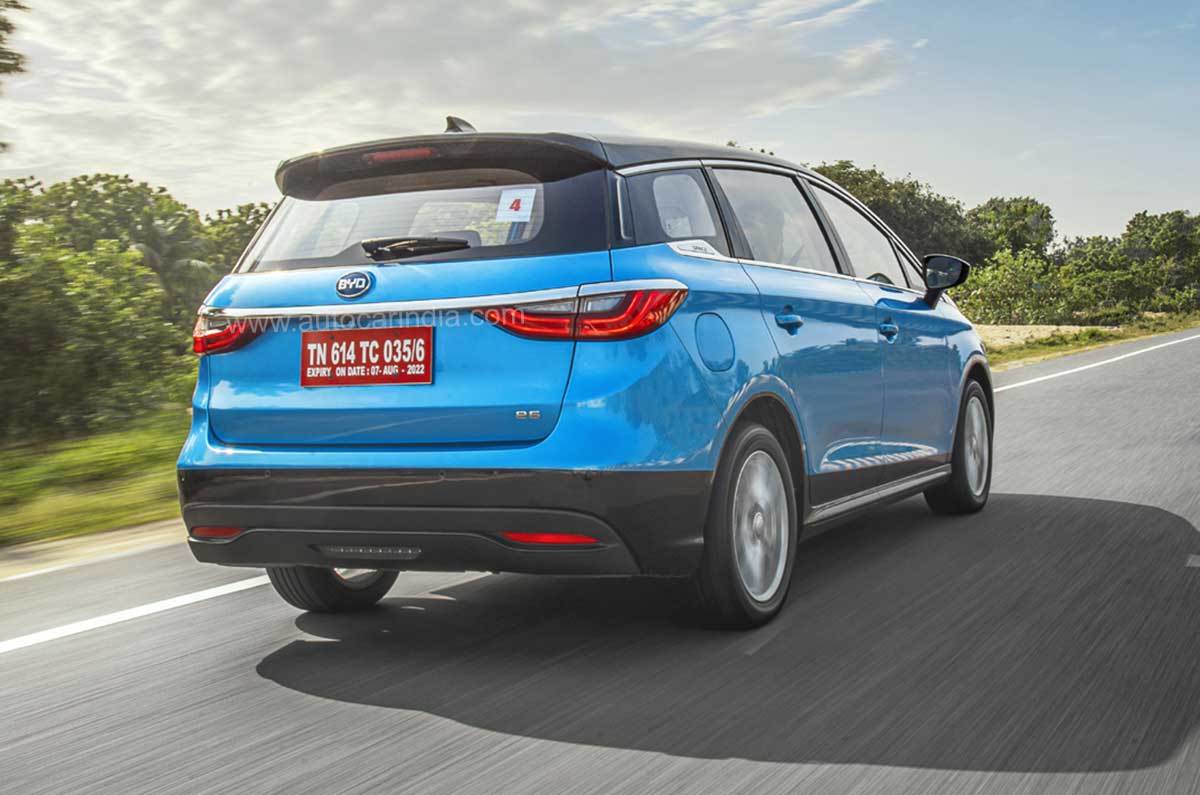 Out on the highway, the e6 is quite comfortable getting up to and cruising at triple-digit speeds, however, it comes equipped with an electronic speed limiter that kicks in at 130kph. Another positive for the e6 is that, even at highway speeds, the NVH levels are very good, with minimal road and tyre noise filtering into the cabin. The e6 comes with two drive modes – Eco and Snow. Eco can be thought of as its standard mode, given that it defaults to this. Snow mode, as the name suggests, is clearly designed for extremely slippery road conditions (something that will come in handy in the monsoons). What this mode does is substantially dull the throttle response to provide the most linear outputs it can to the front wheels, in order to mitigate any loss of traction. Additionally, the MPV also has two levels of regenerative braking – Standard and Larger. The former is fairly mild and feels quite similar to regular engine braking in an ICE car. However, the ‘Larger’ mode is much more noticeable and first-time EV drivers may face a slight learning curve. The infotainment screen also displays neat battery usage graphs and has a cool animation for the regenerative braking. Ride comfort is an area where the BYD e6 performs quite well. It is softly sprung and at low speeds, it deals with almost any road imperfections that are thrown at it. However, due to this soft set-up, there is also a notable side-to-side movement on harsher roads, but at higher speeds, it is flat and composed. 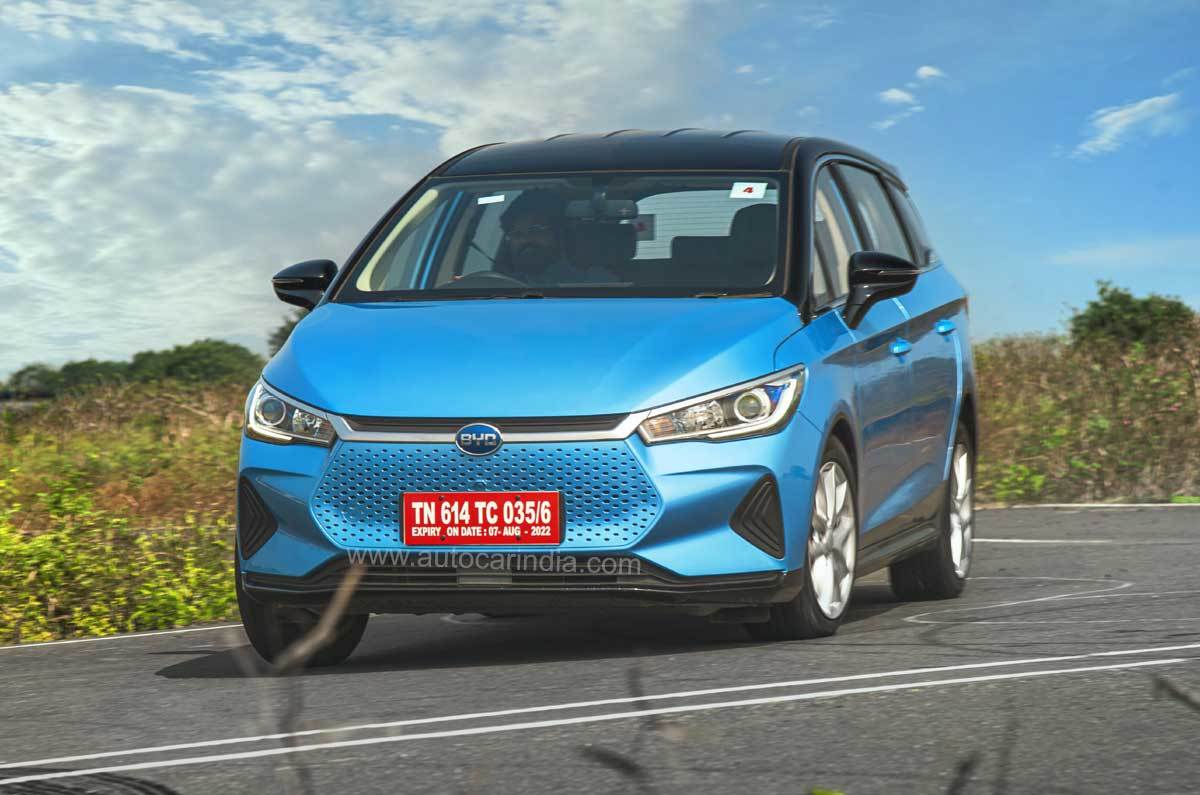 The BYD e6’s soft suspension set-up also compromises the handling of the electric MPV to an extent. While the e6 feels stable out on the highway, it’s quite floaty around corners and neither the steering response nor the grip from the tyres inspire much confidence to push it hard. Then again, chauffeurs aren’t expected to drive it hard anyway.

At Rs 29.15 lakh for the e6 GL and Rs 29.60 lakh for the e6 GLX trim, BYD’s electric MPV is certainly not cheap. It also doesn’t offer the option of a 7-seat configuration and at this price it misses out on a host of features (seen on similarly priced alternatives) such as wireless charger, Android Auto and Apple CarPlay support, and connected car tech. So, it isn’t going to appeal to private buyers, but that’s the company’s plan. The e6 is primarily aimed at commercial operator currently served by the Toyota Innova Crysta, and while the e6 is pricier still, it offers fleet operators some important and specific benefits. It’s got an extremely spacious and very quiet cabin, good boot space, and, of course, the low running costs of Rs 1.59 per km (claimed) and an impressive real-world range. Given the kilometres that fleet vehicles clock each year, the higher price could be negated sooner with the EV’s low running cost. Adding to that is the 8 year/ 5,00,000km battery warranty offered by BYD. And that’s what BYD will be hoping will bring in the fleet.