Peppery, pungent and deeply nutritious, Punjabi Sarson ka Saag (or sarson da saag) is a favorite during the cold North Indian winters, especially when paired with Makki Ki Roti. Making this authentic dish is not hard, but it does take some time. Once you taste how vibrantly creamy and delicious it is, you won’t mind the work! 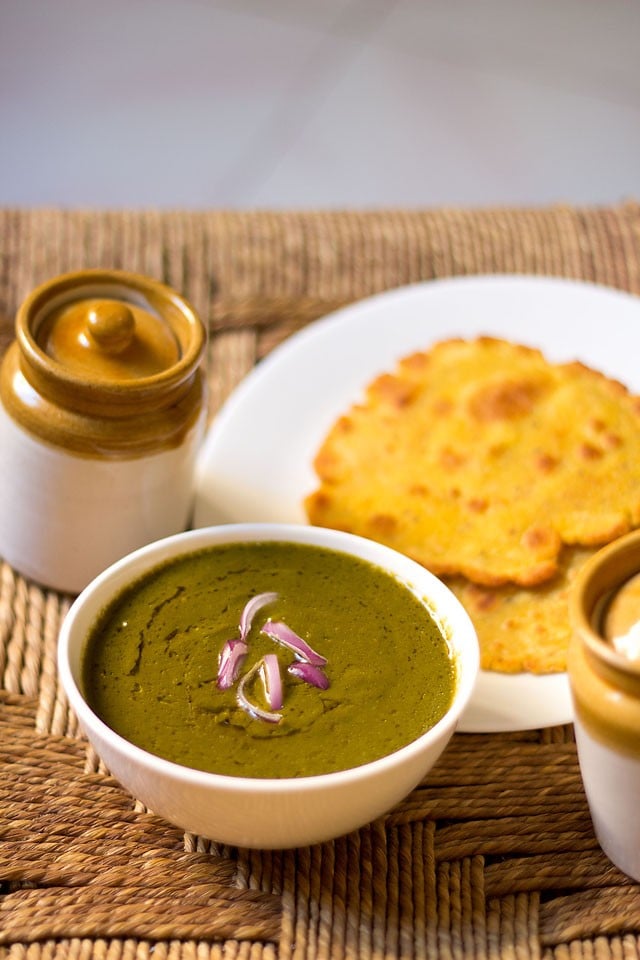 Sarson is the Hindi/Punjabi word for mustard and saag means greens; thus, this recipe is for the traditional Indian preparation of mustard greens. Other versions of saag include: Palak Saag (spinach greens), bathua saag, or Chane ka Saag (chickpea greens).

Sarson ka saag is a type of curry, so it is creamy, saucy and simply addictive. Traditionally, it is served with an unleavened corn-based flatbread known as Makki di Roti, though it can also be served with Paratha and steamed basmati rice.

This sarson ka saag recipe is a labor of love, requiring both time and patience. Unfortunately, there is no shortcut method for making this dish; you’ll need to sort the greens, then wash, chop, and cook them before blending them, after which you’ll need to cook them again. It is a labor-intensive process, but none of the steps are difficult.

While I’m aware that everyone wants their curry in a hurry nowadays, if you really want to savor the taste of an authentic sarson da saag then you’ll have to invest some time in preparing it.

The sarson ka saag recipe is very easy, but does take a lot of time to make; as such I like to break up the steps over the course of a few days. Usually, I clean the greens one day before and keep them in the fridge in airtight containers so half of the work is over. Making the saag the following day makes it feel much easier.

At home, we generally use 5 different leafy green vegetables to make the saag. They are:

You can see all the greens (with the exception of methi) in the photo below.

The predominant flavor in this saag recipe comes from the spicy, bitter mustard greens. The presence of spinach, bathua, and radish helps to lessen the bitterness of the mustard and methi so you end up with a creamy, mellow saag that is simply bursting with flavor.

Winter is the season for both mustard and bathua here in India. Sarson ka saag is therefore considered a cold-weather dish in North India, especially in Punjab from where this traditional recipe comes from.

The sarson da saag is usually topped with Homemade Butter and served with makki ki roti (flat breads from maize flour); this meal is not only comforting but also serves to warm up the palate and body.

With all of the dark, leafy greens, sarson ka saag is a bowlful of antioxidants and phytonutrients, so that extra topping of butter is alright. The saag is also usually served with an accompaniment of sliced or chopped onions and some green chilies for some extra piquancy.

Because this is a time-intensive recipe, I always make sarson ka saag in bulk and keep it in the fridge. Then, when I need to serve it, all I have to do is temper the saag and then enjoy!

From what I have observed, the taste of the saag improves after about a day; all of the flavors meld as it ages. Mine usually does not last for more than 4 to 5 days, after which you can freeze any leftovers.

The recipe I present here is the traditional way we make saag at home. The proportion of bathua to spinach and mustard is 1:1:2. So for example, if you are using 1 whole bunch of mustard leaves then use a ½ bunch of bathua and a ½ bunch of spinach.

You can also consider using this ratio in cup measurement. Example for 2 cups of mustard greens use one cup each of spinach and bathua. Note that you can easily increase or decrease this ratio proportionately.

The other two greens – radish and fenugreek – are added using the Indian method of andaaz, which means we just eyeball it. Fenugreek is optional, though I love the flavor and health benefits it brings to this cozy winter meal.

This sarson ka saag recipe makes roughly 8 to 9 servings, but it can be easily halved or doubled.

How to make Sarson ka Saag

Prep, chop and clean all the greens

1: Remove the lower end of the mustard seems just a few centimeters from the base. The mustard stems can be tough, so it is up to you whether you want to discard the stems or keep them. If you keep them, then they have to be cooked really well so that they become soft.

Sort and prep the remaining greens as well – spinach, bathua, fenugreek leaves. For the radish, sort the leaves and peel, chop the root.

If prepping ahead a day earlier, refrigerate the greens and the radish root in ziplock bags or air-tight containers for a day.

2: This is perhaps the most time-intensive part of the process. You have to really wash the greens – especially the mustard greens – to get rid of the mud clinging to the stems. Depending on the size of your sink, you may need to do this task in batches.

3: Add the greens to a 5 or 6 litre stove-top pressure cooker.

7: Cover and pressure cook for 6 to 7 minutes on medium-high heat, or until the greens become soft. Wait for the pressure to fall naturally in the cooker and then only open the lid.

You can also cook in a pan, though it will take longer. Cover and let the greens cook till they become soft.

8: Let the pressure settle naturally in the cooker. When you open the lid, you will see the greens, onions, tomatoes etc all have cooked well. Let the greens mixture cool to room temperature.

9: Add some of the greens and their cooking liquid to the base of a blender.

11: Working in batches, blend to your preferred consistency. I usually make a smooth puree, but some folks like a coarser texture.

You can also use a hand blender to minimize the number of dishes. If doing so, then chop the greens before you pressure cook them to make them easier to blend. The traditional way is to use a Madani (Indian hand blender) to blend the greens.

12: Pour the greens purée in a deep-sided pot, as it will bubble and splutter. You can also add it to the same cooker.

13: Simmer for a good 25 to 30 minutes. Stir occasionally so that the sarson da saag does not stick to the bottom of the pan. Check the seasonings and add more salt if required.

Once cooled, the saag can be kept in an airtight container in the fridge for 4 to 5 days.

14: The saag is not ready to be served yet – we still have to temper it. We always temper the saag with onions, but you can also add some ginger, green chilies and tomatoes along with the onions. Heat oil or ghee and add aromatics.

The amount of oil/ghee and onions to be added depends on the portions of saag you will be serving. For 3 servings, 1 to 2 tablespoons of oil with 1 medium-sized onion (about one-third cup finely chopped onions) is about right.

16: Add about 2 cups of the cooked sarson ka saag to the tempering. Simmer for a few minutes until the saag becomes hot.

17:  Serve the hot sarson ka saag straight away, preferably with makki di roti and a few jaggery cubes by the side – nothing beats this combination. You can also serve sarson da saag with paratha and steamed rice.

Pair this meal combination of the saag and makki ki roti with a side of freshly chopped onions and green chilies if you like.

What can I substitute for bathua?

You can just skip it, or feel free to add in more spinach. Please note that bathua is also known as chenopodium album, melde, lamb’s quarters, goosefoot or fat-hen.

Does the radish have to be white?

White radish root – also known as daikon – is a delicious vegetable. If you are unable to procure it, I suggest substituting white turnips or regular red radishes instead.

Is there a substitute for maize flour? What is it used for?

Maize flour – which is known as fine cornmeal in the US – can be substituted with besan (gram flour), chickpea flour, or rice flour if you prefer. The purpose of this ingredient is to act as a thickener, as well as to tone down the bitterness of the mustard greens.

Is there any way to make the sarson ka saag less bitter?

If your sarson greens are bitter, I suggest that you reduce the amount that you use and increase the amount of spinach proportionally.

Alternatively, you can do as my mother-in-law used to and get rid of the cooking water from the greens; I don’t prefer to do this because you lose out on some of the nutrients, but it should decrease the amount of bitterness you taste.

How long will the saag last in the fridge?

I suggest you use it within 4 to 5 days. You can also freeze any leftovers for up to 1 month. To serve from frozen, defrost, reheat and then add the tempering.

Can this sarson da saag recipe be scaled?

Yes! So long as you keep the proportions the same, you can either halve the recipe or double/triple it as needed. 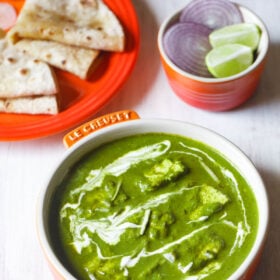 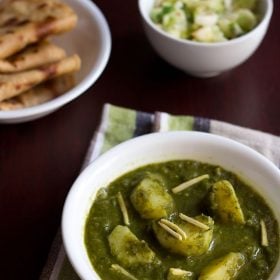 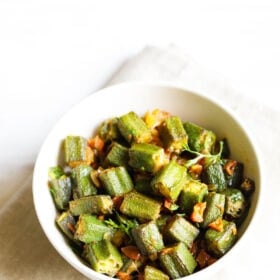 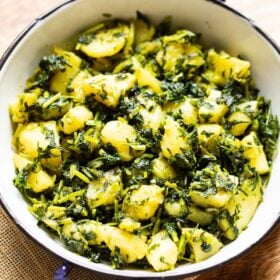 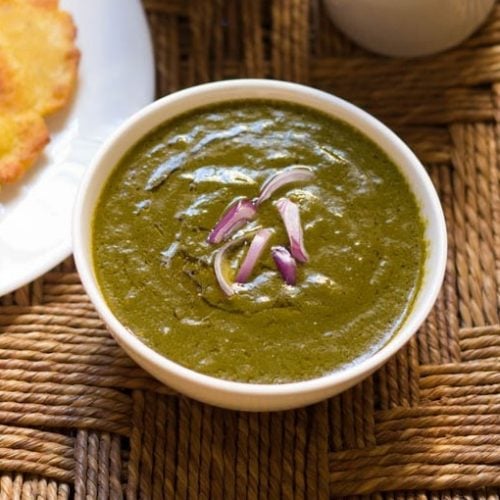 The combination of sarson ka saag topped with butter and served with makki ki roti taste too good and is a winter staple in North India.

* Percent Daily Values are based on a 2000 calorie diet.

Stay up to date with new recipes and ideas.

This sarson ka saag recipe post from the archives, originally published in December 2012 has been updated and republished on 12 December 2021.

53 Data-Backed Retail Statistics Shaping Retail in 2022 and Beyond