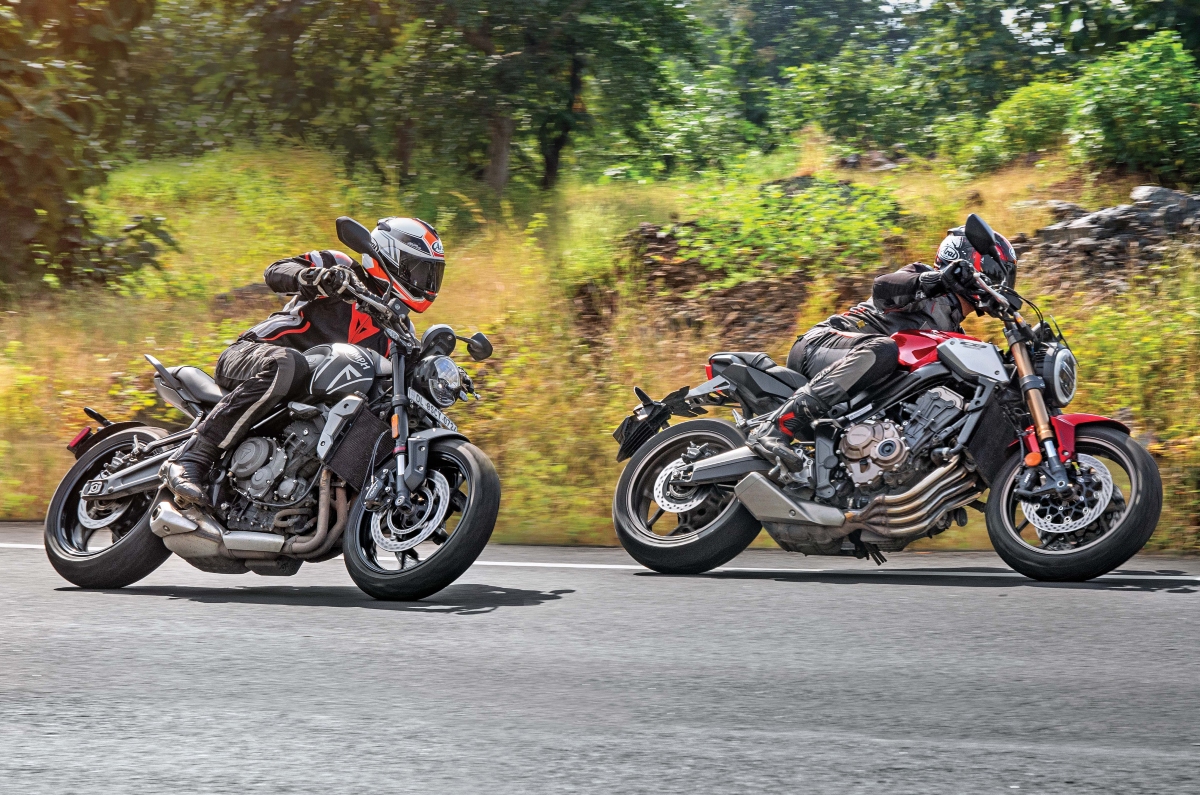 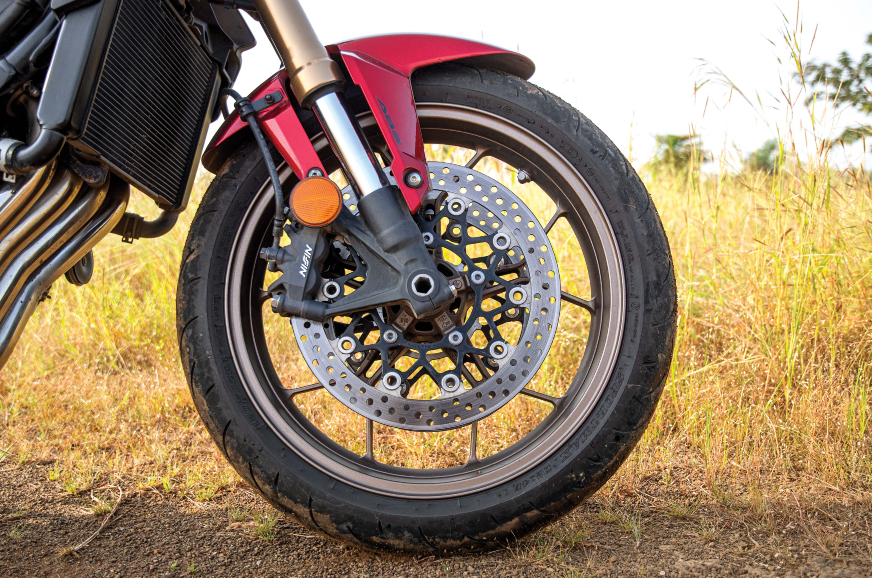 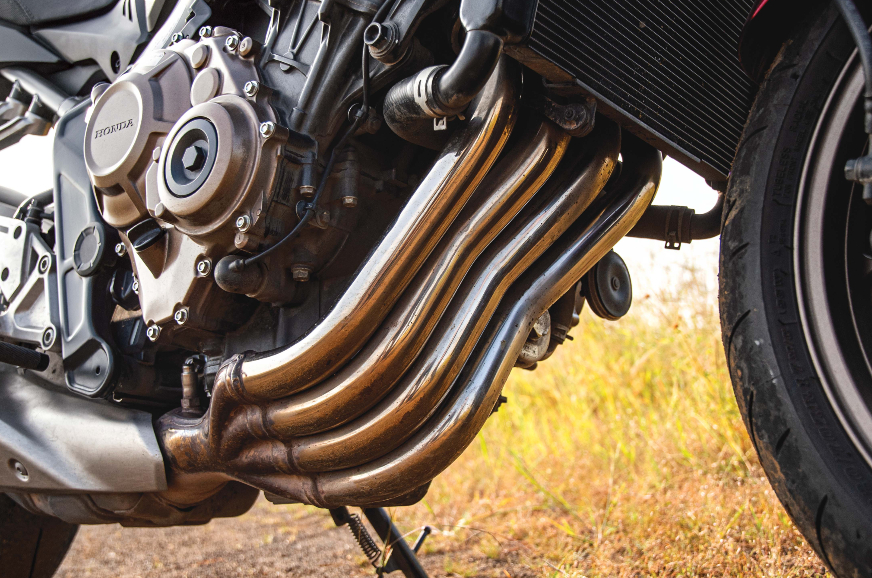 These two closely matched street nakeds are the ideal step up into the world of multi-cylinder motorcycles.

Isn’t it true that there’s something special about firsts? From your first paycheck to your first motorcycle, oftentimes these are milestones that one crosses through life. So, it wouldn’t be hard to imagine the sense of occasion when it’s time to choose your first multi-cylinder motorcycle. And chances are that the Honda CB650R and Triumph Trident 660 figure prominently on that shopping list. The question is, which one of these makes the most logical step up from a small capacity motorcycle?

Speaking of logic, there was much hue and cry about Honda’s decision to paste a premium price tag on the CB650R. After all, Rs 8.67 lakh for a 650cc motorcycle is a lot. However, let’s keep the price aside for now and evaluate the bike for what it offers, shall we?

The minute you set your eyes on the CB650R, the word attractive pops in your head. Because, as far as street nakeds are concerned, Honda has got it spot on. Its circular-LED headlight, beefy front fork and chunky fuel tank are textbook street naked design. The tail section, with its recessed areas for the pillion to hold on to, is neatly executed as well. You can’t help but shift your gaze repeatedly towards the four, symmetrically aligned exhaust header pipes that merge into a stubby end-can. It’s beautiful to look at, almost ornamental if you will. In fact, the proportions of the CB650R are what first time buyers would love. “It’s got presence,” I remember Rishaad mentioning this more than a couple of times. And the number of eyeballs that the CB garnered is proof of that.

The Triumph Trident 660 will not turn as many heads as the CB650R as it simply lacks road presence. Its compact dimensions are a classic case of function winning over form. That said, the Trident looks sporty, with its shapely fuel tank, round headlight and slightly raised tail section with the LED tail-light nestled within. Mounting the number plate and indicators on the tyre hugger gives the bike a tail-tidy appearance. In fact, the Trident’s rear three-quarters angle is our favourite. Frankly, both motorcycles look good and styling is going to be a personal choice. 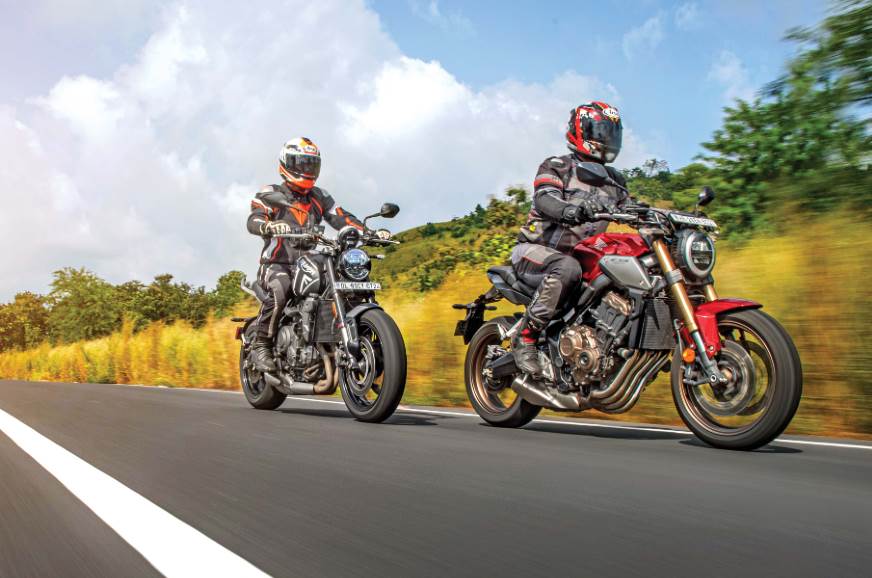 Where the CB650R edges ahead of the Trident is overall quality. From the shine of the paintwork, the bronze engine casings, to the switches and mirrors, the CB feels premium. That’s not to say that the Trident feels the opposite in any way. It too is built quite well and quality levels are good. That said, when you look at the switchgear plastics or the ordinary mirror stalks is when you realise that the Triumph was built on a tighter budget.

This is where the Trident 660 claws back some lost ground. It has a modern, colour TFT display with Bluetooth connectivity that makes the simple yet good-looking LCD display on the Honda appear dated. The Trident can be optioned with a quickshifter by paying Rs 29,650, which isn’t the case with the Honda. 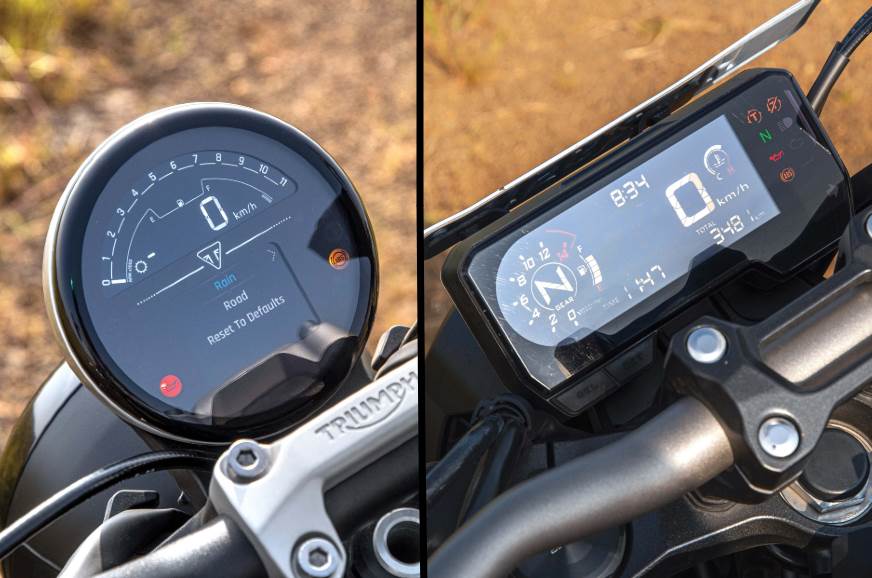 These differences aside, both motorcycles feature all-LED lights. Speaking of which, the CB has a safety feature wherein the hazard lights flash under hard braking. The Triumph, on the other hand, has a nifty car-like lane change indicator that flashes thrice once you soft touch the switch.

Where the Trident does manage to score a few brownie points over the CB650R is the ergonomics. The rider’s perch is set at a relatively accessible 805mm, the handlebar is not too high up and the foot pegs aren’t too rear-set either. It feels relaxed and neutral, while the knee recesses offer enough purchase for you to hold on to the bike. However, 6ft-plus Rishaad found his knee rubbing against the edge of the recess, especially while braking hard. As for the pillion, only a slim person would comfortably fit in the area that’s available.

The Honda has a much more usable seat for the pillion, as it’s wider and flatter than the Trident’s. It’s the same story for the rider’s seat too, although, with a lower handlebar as well as the properly rear-set foot pegs, the position is sportier. In fact, we found the pegs to be a tad higher than required. Nevertheless, both motorcycles are pretty comfortable street nakeds.

The difference between the characteristics of an inline-four and an inline-triple is like chalk and cheese. While that is stating the obvious, what isn’t is that the Triumph’s engine is noticeably smoother than the Honda inline-four. I particularly liked the Trident’s punchy midrange and addictive intake sound as the speeds went up.

The Honda engine is smooth but isn’t as refined, with some buzz as the revs climb. However, we are happy to trade that for its characterful nature. This engine feels much more alive and kicking than the relatively boring engine in the CB650F, which was on sale a few years ago. Power delivery is quite linear and there’s a sense of joy in stretching the revs to the 12,000rpm redline before shifting up. And when you do, you appreciate the slickness of the gearbox. It really was an absolute joy to use. 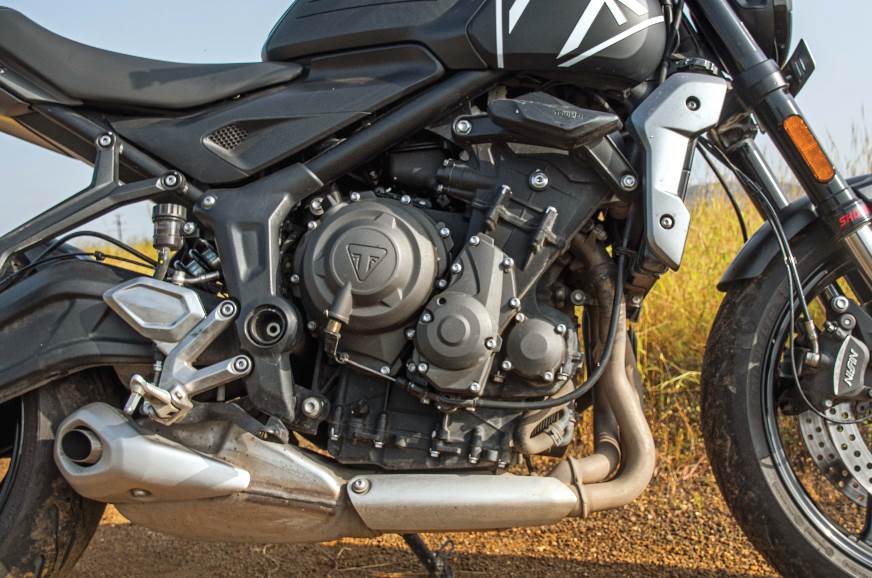 Triumph’s inline-triple is smoother than the Honda.

That said, if you’re feeling lazy to shift gears, both engines are quite flexible and don’t mind running at 40kph in sixth gear. But when it is time to shift cogs, the Honda’s lighter clutch is much appreciated.

Also, you’d be happy to know that 91-octane fuel doesn’t make them stutter and protest. For those wondering about heat management, these motorcycles do heat up in traffic, but not to the point that they’d become unbearably hot.

Both motorcycles have a clear mandate to adhere to when it comes to ride and handling – fun but safe enough for beginners. The CB and Trident are friendly motorcycles, with predictable handling and a forgiving nature.

The Trident’s lower kerb weight, at 189kg, and compact dimensions make it the easier motorcycle to slice through city traffic. Then there are the superb Michelin Road 5 tyres that encourage you to commit to a corner. The ride, too, is pretty acceptable for the class of motorcycle. In fact, with the chassis being so sorted, it begs the question – why make the electronic aids so intrusive?

Firstly, the Trident’s throttle mapping at low speeds isn’t great and the bike only seems to wake up post 3,000rpm. Then there’s the traction control which is extremely alert, chopping power even when there’s ample grip on a bone-dry surface. Switching it off made life much easier and we began to have more fun. It’s the same story with the ride modes as well. With Rain being too dull, we left it in Road (the only other mode), although a Sport mode would’ve truly elevated the fun quotient. 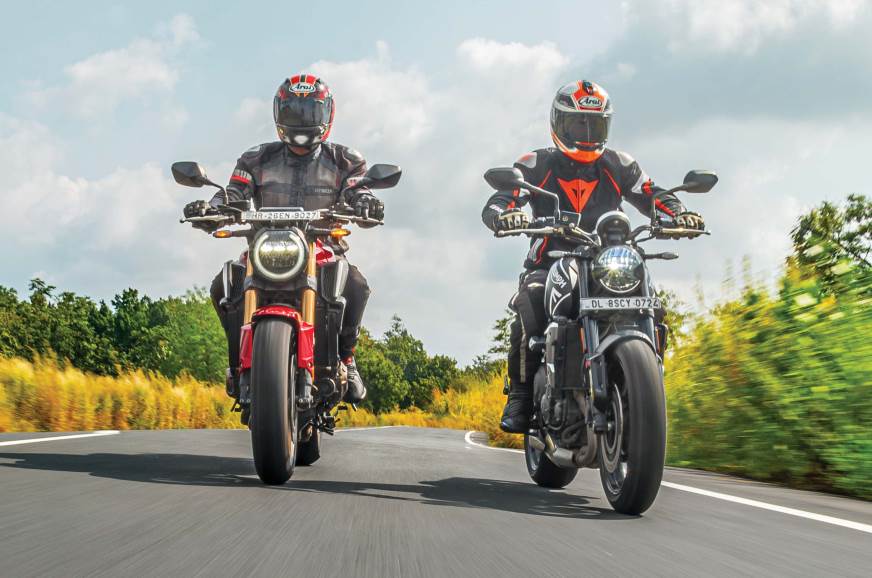 The CB650R’s traction control is a lot more lenient and non-intrusive, letting you have a lot of fun without things getting hairy. The Showa Big Piston fork offers a better low-speed ride than the Trident and it is a stable motorcycle in the corners. That’s until you begin to push it harder, which is when the Dunlop Sportmax D214 tyres’ lack of feedback robs you of confidence. We are certain that a stickier and more feelsome set of tyres will elevate the abilities of the CB650R.

When it comes to braking, both motorcycles are reassuringly good. While the sharp initial bite of the CB’s brakes were nice, the Triumph’s felt stronger once past the initial bite.

AND THE WINNER IS…

This comparison test turned out to be closer than I’d thought. Because truth be told, the CB650R is a fantastic multi-cylinder motorcycle for those stepping up from a 250-300cc bike. The Trident 660 is pretty good as well, however, we unanimously agreed that the CB was a nicer motorcycle overall.

That being said, throughout my time with the CB, I couldn’t shake the thought that its asking price is way too much for somebody graduating up the displacement ladder.

To put things in perspective, the CB is priced above the more powerful and feature-rich Kawasaki Z900. Spend a little more money and it gets you the best affordable middleweight in the Indian market – The Triumph Street Triple R. 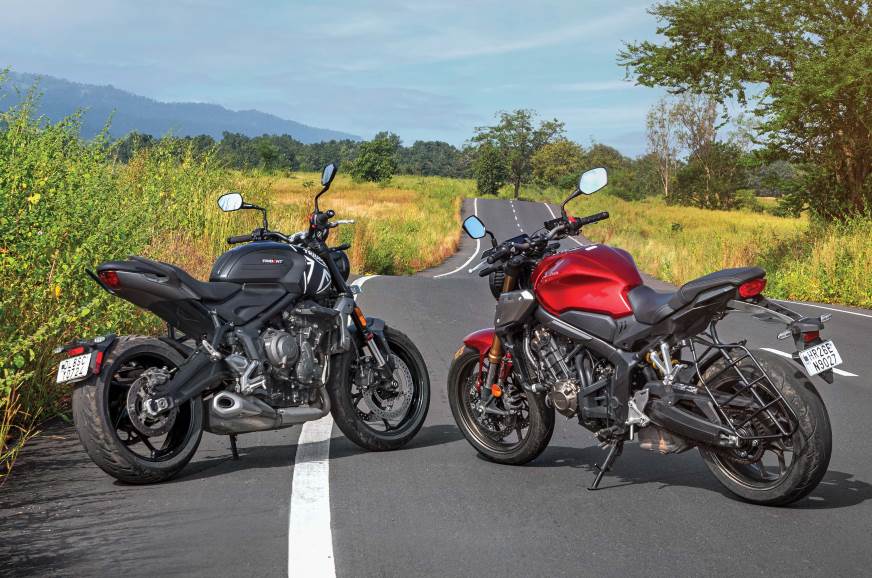 They’re both sweet motorcycles for those stepping up from a 250-400cc bike.

Which is why, the Triumph Trident, at Rs 6.95 lakh (ex-showroom), is the better deal. And it will remain so even after the sizable price hike that comes early next year.

Also, the argument about Honda’s typically lower parts and service cost doesn’t hold water, as you won’t save as much money as you’d spend buying it over the Triumph. Finally, given the fact that both bikes are priced on par in the UK, it’s hard to ignore the ‘premium price’ that the company is charging in India. Unless you’re a Honda fan, or VFM isn’t important to you, the CB650R is a bit of a hard sell, despite being the better motorcycle