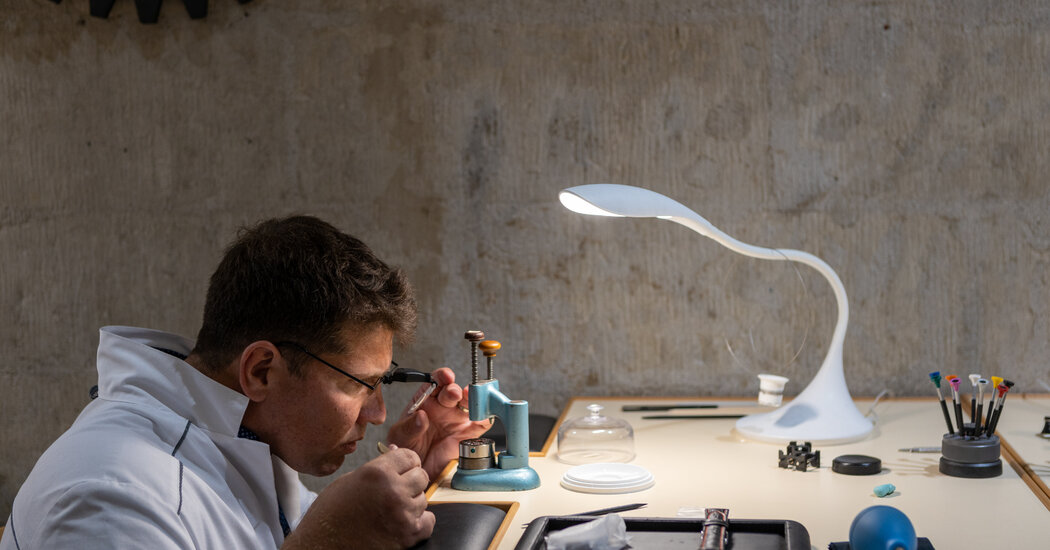 GENEVA — José Balaguer loves watches. He loves them so much he has a five-pronged crown, the Rolex logo, tattooed behind his left ear.

And his enthusiasm must be contagious, because one recent brisk fall afternoon the Chicago resident and his good friend Ryan Klem, 41, of Dallas, came to Geneva to make their own watches.

“I appreciate folks who master their craft,” Mr. Klem said, while Mr. Balaguer, 39, nodded in agreement. “And we’ll have the opportunity to bring back a piece of the craftsmanship for ourselves.”

Their mission sounds impossible: to make a watch in half a day. But it actually is done at Initium, a business that was the brainchild of Gilles Francfort and Mathieu Gigandet. The two men, who both grew up in Swiss mountain towns that are watchmaking centers, met while studying economic entrepreneurship at college. (And Mr. Francfort’s father is a friend of the famous watchmaker Philippe Dufour, who now lives in the house where Mr. Francfort grew up.)

The two classmates had to collaborate on a class project, and decided to celebrate the heritage of horology. “We wanted to respect watches, but by doing something different,” Mr. Francfort, 36, said, “not just create another brand.”

They came up with the idea of a program that would convey “what it feels like to make a watch,” Mr. Francfort said, “to give a true glimpse into what it is like to be a watchmaker.”

The school project became their business plan and, in 2015, they opened the first Initium in Le Noirmont, a town in the area the Swiss tourism authority calls Watch Valley. Gebertingen, outside Zurich, soon followed and then Geneva, in 2018.

Its programs range in price, duration and content, starting at 350 Swiss francs ($377) for the three-hour Alpha program, which focuses on assembling a movement. The most expensive is Delta, at 2,890 Swiss francs, a full day that includes assembling an automatic movement and leaving with your own watch.

Mr. Balaguer and Mr. Klem chose the Gamma class, which, for 1,990 Swiss francs each, had them create watches using manual movements that already had been assembled.

Initium has a selection of watchmakers on call to lead classes. On this particular day it was led by Kevin Nebel, whose experience includes stints at Piaget and Breitling. And, like so many in the Swiss watch industry, he comes from a watchmaking family, starting with his great-great-grandfather.

During the four-hour class Mr. Nebel, 37, thoroughly explained each step involved in turning a series of parts into a functioning watch. Instruction usually is given in English, although classes in French, German, Spanish and Portuguese can be arranged. Mr. Klem and Mr. Balaguer were the only students on their class, although Mr. Francfort said that numbers varied and that as many as 12 can be accommodated, with additional instructors, in Le Noirmont and Gebertingen.

The two men donned white lab coats and sat face-to-face at workbenches where the tools they would need already were arrayed. There were a dozen different screwdrivers, with color-coded handles to distinguish size and function; loupes for close-up viewing; tweezers in brass, which is softer than other metals and produces fewer scratches; and two blue items, one that looked like a rubber bulb and the other like putty.

Mr. Nebel started the class with a slide show on the history of timekeeping and, when he got to the photo showing the numerous parts that make up a watch, he told the men, “Don’t be scared.”

Mr. Nebel adjusted the chairs to the proper height, so each man was just about eye level with the parts and tools on the workbench. (The position sounds uncomfortable, but each bench has leather-covered arm rests so workers do not have to maintain the position on their own.)

Then, before work began, it was time to select components, perhaps the most exciting part of the program. Choices include the metals and style of the case, dial, hands, movement and strap, and are so varied that “there can be a million different combinations,” according to Tamara Aziz, the manager of the Geneva work space.

“In six years,” Mr. Francfort said, “we’ve never seen the same watch twice in any of our workshops.”

After Mr. Nebel removed some dust covers to expose a table full of display cases, filled with the parts, Mr. Balaguer called out, “Stop, you have too many choices!” But after a lot of animated discussion and trial combinations, he selected a semi-skeleton movement with blue screws; a fluted steel case; a silver and white dial with Arabic numbers; blue Breguet-style hands, which have small circles at the ends; and a dark blue leather strap. Mr. Klem went with a brushed steel case; a dark gray dial with indexes; red dauphine hands, which are triangular and faceted; and a black strap, embossed to look like crocodile, with red stitching.

Mr. Nebel demonstrated and the men followed along — from how to cut the stem that holds the crown, using special pliers and a file, to how to clean the case once the movement is ready to be installed. That was when the blue items came into play.

The puttylike substance is named rodico, or what Mr. Nebel called “the watchmaker’s best friend,” as it is used to gently dab at any dust particles. And the bulblike device is palpitated to squirt out air, whooshing away dust.

When the movements were dropped into the cases, and the men attached the case backs with tiny screws, the excitement built. Minutes later the bracelets were attached and the watches strapped to their wrists, and the men exploded with whoops of joy.

And all four hours had been recorded on video by the Initium staff and transferred to flash drives for the men to take, along with their watches.

The experience gave them a real appreciation for what goes into making a watch, the men said, with Mr. Balaguer promising, “I’ll never look at my watch the same way again.”

That is what Mr. Francfort always wanted. “We’re not creating watchmakers,” a process that takes years, he said, “but an understanding of what’s on your wrist.”

A few years ago, Mr. Francfort said, a Swiss TV show featured Initium and, as a result, “there are now 15 competitors in Switzerland” alone — and a quick search online turns up other programs around the world. Mr. Francfort and Mr. Gigandet say they are working hard to stay ahead, recently coming up with an at-home kit (2,290 Swiss francs) that can be shipped to aspiring watchmakers who do not want to come to Geneva.

It all goes back to keeping horology moving forward. As he sat in the wood-beamed workshop, housed in a 500-year-old building, Mr. Francfort looked out the storefront windows onto the narrow cobblestone street in Geneva’s Old Town. Switzerland’s watchmaking heritage is the result of farmers living in the mountains who would occupy their winter months by making watches and, come spring, bring their wares into the city to sell.