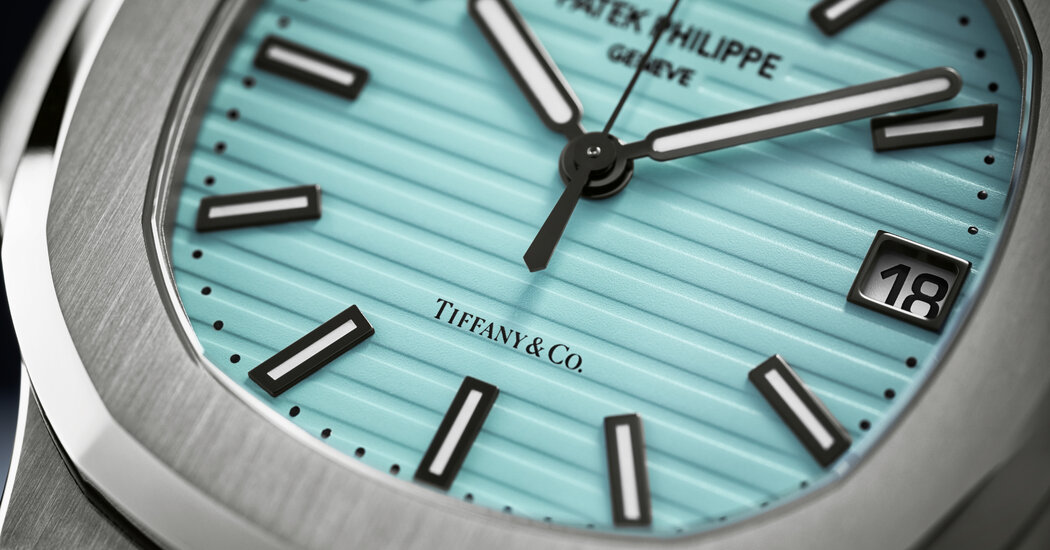 Most watch lovers would agree that owning a timepiece by Patek Philippe means you have arrived in the horological big leagues.

But, for extra cachet, what if the face of the watch featured the retailer’s name — say, Tiffany & Company — and was the color of its signature robin’s egg blue? And, for even more, what if the model were a version of the recently discontinued Ref. 5711, the steel Nautilus, one of the most coveted wristwatches in the world?

Well, then you would have the equivalent of a horological unicorn, the hypothetical value of which might rewrite the record book for secondhand watch sales.

Until today, the luxury watch world was not aware of such a timepiece. But fantasy is to meet reality later this month, when the model is scheduled to be delivered to Tiffany locations in New York; Beverly Hills, Calif.; and San Francisco.

Known as Ref. 5711/1A-018, this Nautilus will be limited to 170 pieces to honor the 170th anniversary of Patek Philippe’s partnership with Tiffany — including one piece that the retailer is planning to consign to Phillips for its New York watch auction on Saturday, with proceeds benefiting The Nature Conservancy, a global environmental organization.

“We’ve been working so long with Tiffany,” Thierry Stern, Patek Phillipe’s president, said on a video call in mid-November. “It’s our oldest retailer in the U.S. I grew up with Tiffany and I’m not even talking about business; it was a part of my family.”

The business arrangement between the firms dates from 1851, when Tiffany became the Swiss company’s first authorized U.S. dealer. Over the years, the agreement has survived numerous ownership changes, including the Stern family’s purchase of the watchmaker in 1932 and the $16.2 billion acquisition of Tiffany, completed in January, by LVMH Moët Hennessy Louis Vuitton.

Mr. Stern said he wanted to signal to Tiffany that “you have been doing a good job,” especially now that the important step of its sale to LVMH has been taken.

But, “I’m not sure it’s a gift for them,” he added. “It may be a big problem. They may not realize how difficult it’s going to be to choose the clients.”

That may be the understatement of the year. The frenzy that is sure to erupt among longtime Patek Philippe collectors and important Tiffany clients over those 170 timepieces is likely to be almost unprecedented.

Introduced in 2006, the Ref. 5711 — itself a refined version of the original 1976 Nautilus, a stainless steel luxury sport watch influenced by nautical motifs and designed by the celebrated Gerald Genta — has long been one of the industry’s most prized wristwatches. But around the start of the coronavirus pandemic, prices for pre-owned pieces started to climb. Earlier this year, when Patek Philippe announced it was discontinuing the model, the secondary market reacted by pricing it at nearly four times its $34,890 retail value.

In February, Mr. Stern said that collectors, some of whom had added their names to waiting lists that were eight, even 10, years long, could find hope in his decision to give the model “a victory lap.” (Patek Philippe sells its timepieces through a tightly controlled network of retailers around the world.)

“We will have a surprise final series of the Ref. 5711,” Mr. Stern said then. “And it is not what was left in the pipeline.”

“I’m confident that if a Tiffany-signed green dial surfaced, it would bring $800,000,” said John Reardon, the founder of Collectability, an educational platform and online reseller of vintage Patek Philippes. (Mr. Reardon was commenting generally on retailer-signed dials, not the Tiffany Blue watch in particular.)

Double-signed watches were relatively popular in the 20th century, when watchmakers, including Patek Philippe and Rolex, honored their relationships with retailers such as Serpico y Laino in Caracas, Venezuela; Beyer in Zurich; and Freccero & Cia. in Montevideo, Uruguay, by stamping the names on the faces of their timepieces. But the models were not always in demand.

“Twenty years ago, I had a number of collectors refer to retailer signatures on a Patek Philippe dial as nothing but graffiti,” Mr. Reardon said.

Now, he continued, collectors prize original condition above all else. “When you find a beautiful dial with a retailer signature, it often indicates the dial is original and unrestored,” Mr. Reardon said. “These retailer-signed Patek Philippe iconic references are considered benchmark trophies.”

For reasons that may have to do with Tiffany’s enduring relationship with Patek Philippe, Tiffany-signed pieces have a particular “magic” and tend to go to loyal collectors rather than opportunists chasing a fast buck, Mr. Reardon said. (Indeed, the company is the only retailer in the world whose name continues to appear on a Patek Philippe dial.)

“Everything has a price, but not for these collectors,” he said. “That Tiffany signature is to them something sacred, something priceless and something to be kept in their families.”

The new model will be $52,635. A spokeswoman for Patek Philippe said the higher price was related to the additional work involved in customizing and producing a small series.

Tiffany executives were not available to comment on the watch. (Mr. Stern said he had discussed the limited edition with Alexandre Arnault, Tiffany’s executive vice president of product and communications. His father, Bernard Arnault, is LVMH’s chief executive.) But it is one more innovation since the LVMH takeover — joining the collaboration with Supreme, the Beyoncé and Jay-Z ad campaign and the house’s first-ever line of men’s engagement rings — raising the buzz level around the heritage brand.

Mr. Stern alluded to another detail that may make the model, and the retailer, even more buzzworthy: In addition to a commemorative inscription on the sapphire crystal caseback that reads “170th Anniversary 1851-2021 Tiffany & Co. — Patek Philippe,” the watch includes what moviemakers and software companies call an Easter egg.

“I’m very curious to see how long it’s going to take people to discover that there is a secret on every piece,” Mr. Stern said.

He paused before adding a comment that seemed to acknowledge what many in the watch world might ask when they read about the limited edition: Is Patek Philippe for sale, and will the buyer be Tiffany’s parent company?

“It’s fun; it’s not commercial,” Mr. Stern said about the Easter egg. “And only a family business can do that.”

25 On-Sale Menswear Essentials to Heat Up Your Winter Wardrobe