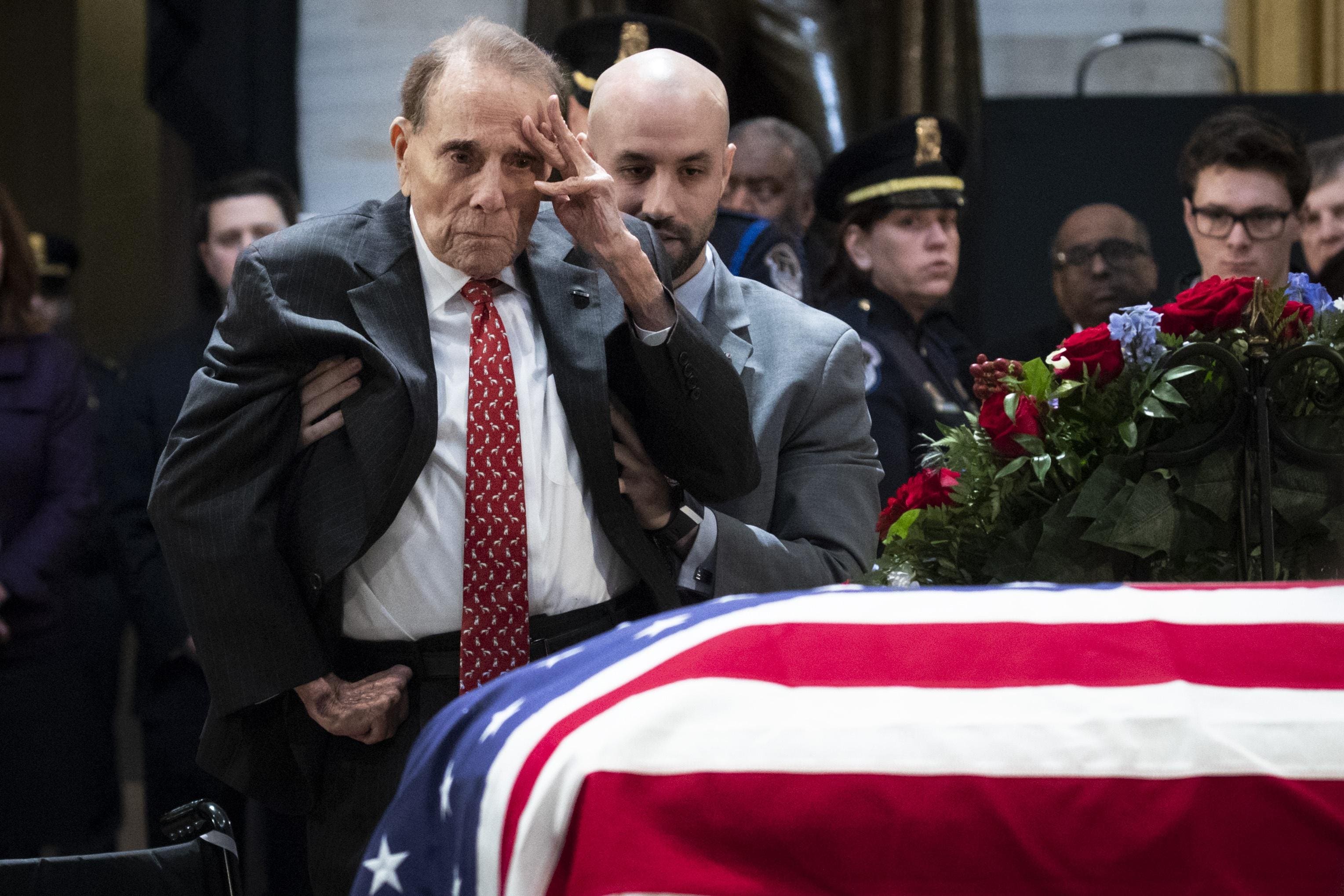 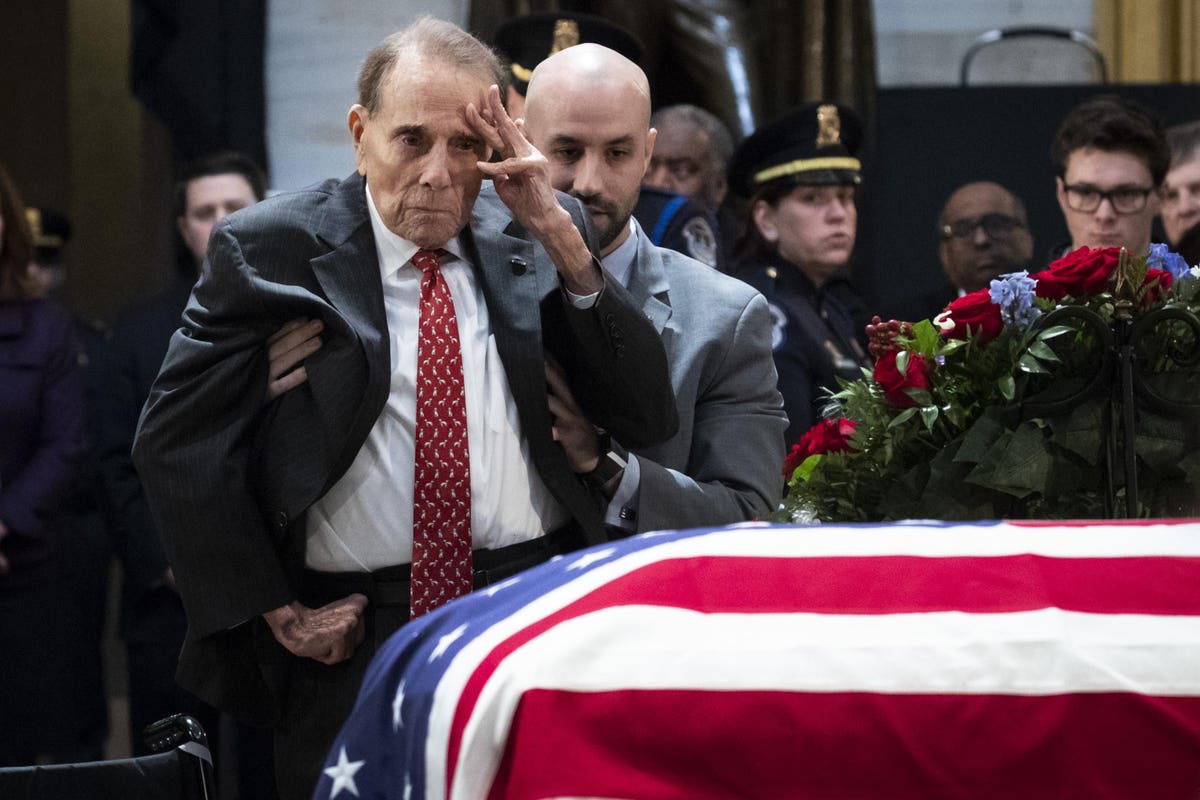 “It is with heavy hearts we announce that Senator Robert Joseph Dole died early this morning in his sleep. At his death, at age 98, he had served the United States of America faithfully for 79 years. More information coming soon. #RememberingBobDole,” the Elizabeth Dole Foundation (@DoleFoundation) announced via Twitter.

Sen. Dole was a World War II veteran, and had been seriously wounded while serving in Italy. A German shell struck his upper back and right arm, shattering his collarbone and part of his spine. Those injuries left him with limited mobility in his right arm and numbness in his left arm.

After the war, Dole entered politics and went on to serve for 27 years as senator for his home state of Kansas, during which time he was twice the Senate majority leader. He is more famously remembered for his unsuccessful campaign against President Bill Clinton in 1996, his third attempt at the White House. He had previously served as President Gerald Ford’s running mate in 1976 after then Vice President Nelson Rockefeller declined to run.

One Of The Greatest Generation

In a rare sign of unity in a deeply divided nation on Sunday, there was an outpouring of praise for Sen. Dole from those on both sides of the aisle. Few had a negative word to say about the man who had dedicated his life to public service.

“Senator Bob Dole dedicated himself to the American experiment and its deepest ideals. Today, we should reflect on service to one another and commit to following the example he set for America. Judy and I join the nation in mourning the passing of an extraordinary American life,” posted Republican House Leader Rep. Kevin McCarthy (R-Calif.) (@GOPLeader).

Senator Dianne Feinstein (D-Calif.) (@SenFeinstein) was among many of those who had served in Congress with Dole to take a moment to honor him in words, writing, “Bob Dole dedicated his life to his country, first serving in World War II and later representing Kansas in the House and Senate for 35 years. He was an honorable man and he will be missed. My thoughts are with Elizabeth and the Dole family.”

“Bob Dole was a great leader, a man of wit and great patience. I had many great moments with him and offer my deepest condolences to the family, and especially to Elizabeth,” noted former Republican Governor of Ohio John Kasich (@JohnKasich).

Former Democratic Minnesota Sen. Al Franken (@alfranken) tweeted, “Bob Dole passed today. His memory will be a blessing to his family and the country he served. He was a war hero, one of the great senators, a lovely man, and…well, I’m finally the funniest former US senator. I’ll miss this REALLY funny man.”

“Not only was Bob Dole a giant of the Senate, he was also a decorated WWII veteran and a champion for disability rights. He was results driven—always willing to cross the aisle to find a principled comprise. My thoughts are with Elizabeth and his entire family during this time,” posted Sen. Tom Carper (D-Delaware) (@SenatorCarper).

“Senator Bob Dole defined the term ‘The Greatest Generation.’ It is with affection, respect, and a heavy heart that I join men and women throughout our nation in saluting a true hero,” tweeted Sen. Susan Collins (R-Maine).

Democratic House Majority Whip Rep. James E. Clyburn of South Carolina (@WhipClyburn) wrote, “I am saddened to learn of Bob Dole’s passing. He was a true statesman who served his country with distinction for 79 years. I respected his character and commitment to American ideals. Our country has lost one of its great champions.”

Chris Lu (@ChrisLu44), former Obama White House Cabinet Secretary, described a trip with the late senator, writing, “In June 2009, I traveled to Normandy with a presidential delegation for the 65th anniversary of D-Day. Bob Dole was one of our honored guests. Gracious and kind, he spoke with as many WWII veterans as he could, always asking them their stories. A genuine hero and statesman. #RIP”

The official Twitter account for the American Association of People with Disabilities (@AADP) marked Sen. Dole’s passing, “Senator Bob Dole was not only a champion for disability rights, but also a founder of our organization. His loss will be felt greatly by our community, but so will his legacy. Thank you, Senator Dole.”

Clearly even those who didn’t always agree with Sen. Dole’s policies could come together in his passing. That should serve to suggest that perhaps our divide isn’t as great as it may seem at times.