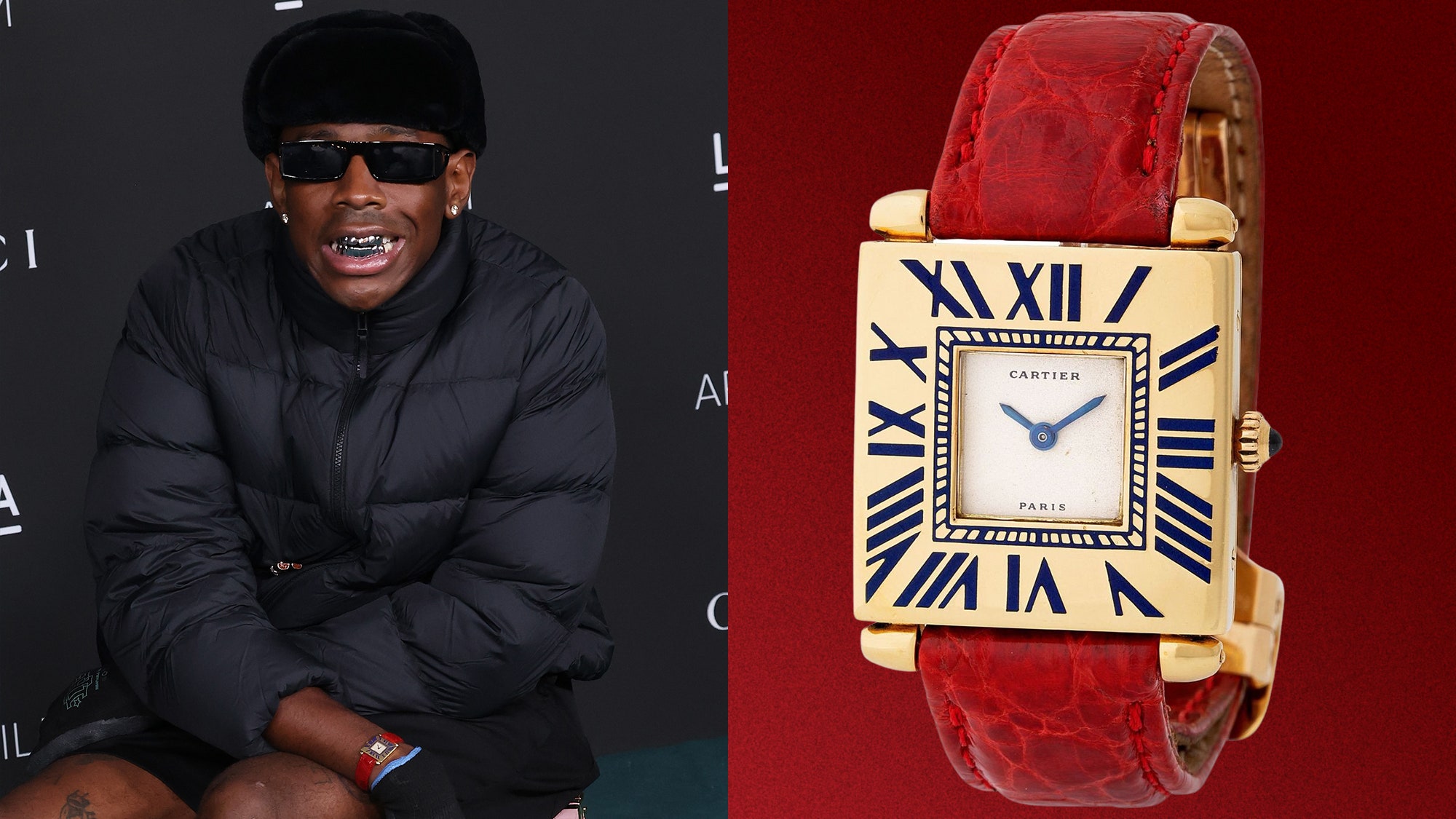 A few weeks ago, Tyler, the Creator was spotted at the Monaco Legends Group auction—an event dedicated entirely to the sale of rare and unique Cartier pieces. A photo of Tyler and his Dalí-esque Cartier Crash taken by legendary collector John Goldberger zoomed around the watch world at record speed. What that image captured was a guy we hadn’t met before: Tyler, the Creator Of An Epic Watch Collection. Before the fall of 2020, the rapper had hardly been seen in anything but an $11 Casio. All of a sudden, he was jetting to Monaco to splash out on tasteful Cartier wristwear. One fellow attendee at the Monaco Legends auction described Tyler as “super cool and discrete.” They mentioned Tyler stayed away from top lots, opting instead for what they described as “easy going stuff.” We know that Tyler walked away with at least one of those “easy going” pieces: writer Nick Gould spotted Tyler at the LACMA Art + Film Gala wearing what seems to be the Cartier Obus Quadrant that sold for €9,100, or just above $10,000, at the Monaco auction.

The Quadrant isn’t the only Cartier Tyler added to his collection recently, either. This weekend, while performing at the American Music Awards, Tyler wore another unusual-looking watch with domed edges protruding from the top and bottom of the dial. Because of the quality of the photos, it’s hard to say for certain which watch Tyler is wearing, but that distinct feature provides a pretty helpful clue. According to watch dealer and Cartier collector Eric Ku, the domed case and edges are a signature of a model called the Duoplan. Both Jaeger-LeCoultre and Cartier made “versions in a multitude of shapes and sizes,” Ku says. Add both the Duoplan and Quadrant to Tyler’s collection that already included a Crash, Tank, and Santos-Dumont.

Yeah, Tyler has great taste. The Quadrant is a highly unusual watch. While the numerals on most watches go inside on the dial, Tyler’s watch has a wide bezel that fits them in instead. Andbecause Tyler almost certainly got this piece from the Monaco Legends auction we have a lot of information about it. The model may have been introduced in the late ‘20s but Tyler’s watch was made sometime in the ‘80s in Paris. This piece also came with its original box and papers, which is collector catnip.

A lot of celebrities own Nautilus watches nowadays, but very few of theirs are like Kim’s. Kim showed this watch off in an episode of Hodinkee’s “Talking Watches” and admitted that he wasn’t very into the more-casual Nautilus when he first got into collecting. Over time he learned to appreciate the model and made sure to track down the reference 3700, which is the very first Nautilus that Patek Philippe ever made. Even cooler: Kim’s caseback is engraved with the name of its original owner. As Patek loves to say, “You never actually own a Patek Philippe, you merely look after it for the next generation.”

Griffin is struggling mightily on the court for the Brooklyn Nets so far this season but his outfits off the hardwood have been terrific. (A counterpoint to the Deion Sanders axiom that when you look good you play good.) He is in on the mohair trend, and wore this absolutely dynamite watch before the Nets played in Cleveland Monday. The black-and-brown “Root Beer” is another GMT model that takes inspiration from the soda machine (there’s also the blue-and-red “Pepsi” as well as the red-and-black “Coke”). What distinguishes Griffin’s piece is the irresistible 18-carat rose gold used for the case and bracelet.

A Kevin Hart watch spotting never disappoints. Here he’s wearing AP’s flagship Royal Oak model with an openworked dial. You know how a magician will never reveal their secrets because if they did it would reveal it was all just a big goofy trick? This is like the opposite of that. AP wants to open it all up and show off how the watch works—it only serves to make this little piece of machinery all the more impressive.

This is absolutely a feeling-myself watch. Beal is right to wear it with his Washington Wizards off to a much-hotter-than-anyone-could-have-predicted start to the season. The case? !8 carat “King Gold,” a metal Hublot developed to have a warmer tone. The strap? Oh, just alligator leather. If this is what we’re getting with after this quick start, just imagine which watches Beal will have to pull if the Wiz remain in the top half of the Eastern Conference. In the words of Mo’Nique, “I would like to see it.”