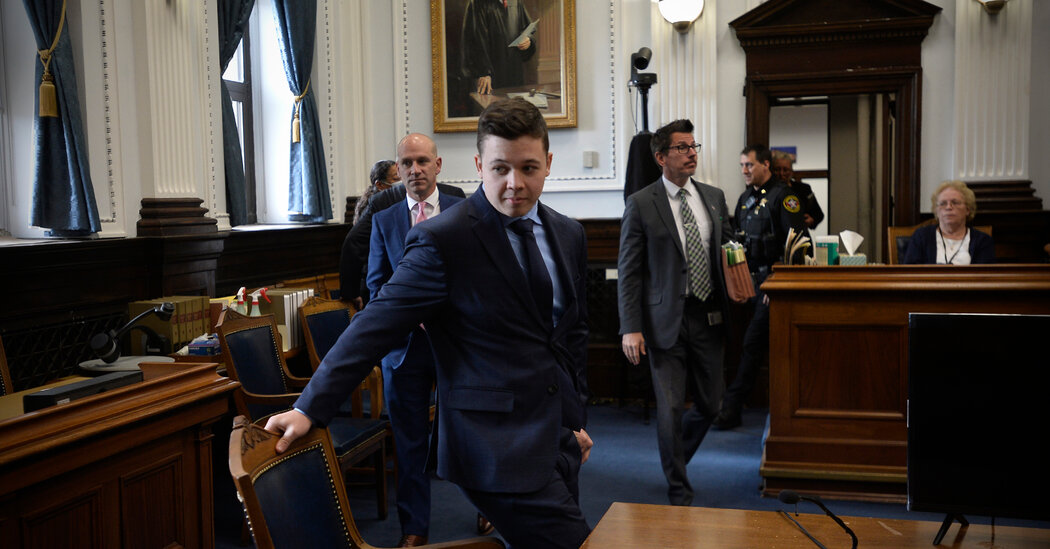 Did you follow the trial? What do you think of the verdict, and its broader implications?

To learn more about the case, listen to “The Daily” episode “The Acquittal of Kyle Rittenhouse” or read these excerpts from the article “Kyle Rittenhouse Acquitted on All Counts,” by Julie Bosman:

Kyle Rittenhouse, who fatally shot two men and wounded another amid protests and rioting over police conduct in Kenosha, Wis., was found not guilty of homicide and other charges on Friday, in a deeply divisive case that ignited a national debate over vigilantism, gun rights and the definition of self-defense.

After about 26 hours of deliberation, a jury appeared to accept Mr. Rittenhouse’s explanation that he had acted reasonably to defend himself in an unruly and turbulent scene in August 2020, days after a white police officer shot Jacob Blake, a Black resident, during a summer of unrest following the murder of George Floyd by a Minneapolis police officer.

Mr. Rittenhouse sobbed and was held by his lawyers after a clerk read the jury’s verdict, acquitting him of all charges.

After the shootings, Mr. Rittenhouse was transformed from an unknown 17-year-old from rural Illinois into a national symbol. Some Americans were horrified by the images of a teenager toting a powerful semiautomatic rifle on a city street during racial justice demonstrations, a reminder of the extent of open carry laws in the United States. Others saw a well-meaning young man who had gone to keep the peace and provide medical aid, a response to the sometimes destructive protests that had roiled American cities in the summer of 2020.

“So many people look at this case and they see what they want to see,” Thomas Binger, the prosecutor in the trial, had cautioned jurors before they began deliberations.

The case reflected the sharp split in the country, and political leaders and others weighed in almost immediately, conservatives deeming it a win for the notion of self-defense and liberals labeling it a failure of the criminal justice system.

On Aug. 25, 2020, Mr. Rittenhouse arrived in downtown Kenosha with his rifle and a medical kit on the third day of civil unrest over the shooting of Mr. Blake by Officer Rusten Sheskey in the former factory town of 100,000 residents. (In January, prosecutors announced they were not charging Officer Sheskey with wrongdoing.) Demonstrators marched peacefully at points, but some smashed streetlamps and set cars and shops on fire. Law enforcement was overwhelmed, and dozens of civilians took up their own firearms to guard businesses and subdivisions, adding to a tense and chaotic atmosphere that included sparring between the groups.

Testimony and video footage shown during the two-week trial revealed that Mr. Rittenhouse was chased into a parking lot, at one point, by Joseph Rosenbaum, 36, who was unarmed and behaving erratically. Mr. Rittenhouse turned and shot him at close range, killing Mr. Rosenbaum, who had been living in Kenosha.

Mr. Rittenhouse then shot two other people — Anthony Huber and Gaige Grosskreutz — who pursued Mr. Rittenhouse as he fled, testimony showed. Mr. Grosskreutz, a medic from the Milwaukee suburbs, survived and testified at the trial, saying he had pulled out a gun because he believed that Mr. Rittenhouse was an active shooter. Mr. Huber, who was 26 and had been protesting the shooting of Mr. Blake — a longtime friend — died after a gunshot to the chest.

Students, read the entire article or listen to the entire “Daily” episode, then tell us: