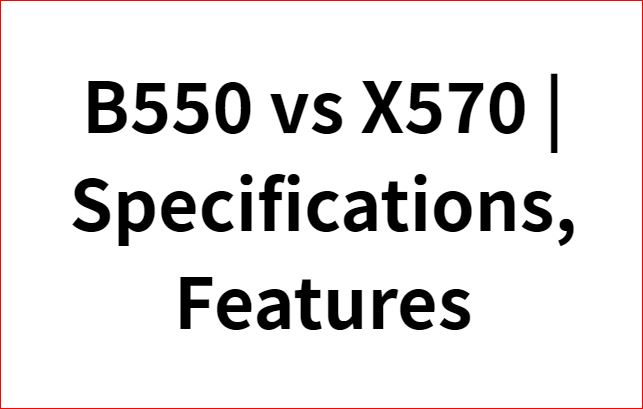 X570 is the top-of-the-line chipset from AMD while the B550 Chipset is the next best thing. Both these chipsets support the latest 5000 Series CPUs from AMD. They both replaced the previous generations chipsets i.e., X470 and B450 respectively. With support for PCIe4.0 (for both GPU and NVMe Storage) and wide CPU support, X570 and B550 are the two top picks for AMD motherboards right now. So, in this article, we will explore more about X570 and B550 chipsets, draw a comparison of B550 vs X570 with pros, cons and features and also have a mini buying guide that tries to answer the important question: Which motherboard is the right one for you, X570 or B550?

Let us kick of the B550 vs X570 comparison with the X570 Chipset. Launched in July of 2019, the X570 replaced the previous generation’s X470 Chipset and with support for the, at the time upcoming Zen 3 based Ryzen 5000 Series CPUs. It is the first chipset with support for PCIe 4.0 based graphics cards and NVMe storage devices.

Here are the specifications of X570 Chipset:

The X570 Chipset is aimed at high-end gaming and content creation systems for gamers, professionals, photo and video content developers. X570 Chipset is designed for the AMDs AM4 socket CPUs. This means if you have any of previous generations Ryzen processors, then you can continue using them. But the catch is this is applicable from Ryzen 2000 Series CPUs only and not for the 1st gen Ryzen 1000 Series CPUs.

Depending on the number of PCIe 4.0 lanes, the X570 Chipset draws anywhere between 11W to 15W of power. This is significantly higher than the previous generations X470 Chipset, which had a maximum power draw of 6W. As a result, most X570 Motherboards have a dedicated cooling fan for the X570 chipset.

B550 Chipset was released a whole year after the X570 in June of 2020. It is slightly less expensive than the X570 Chipset and is a replacement of the previous generations B450 Chipset. The B550 Chipset is also aimed to be paired with the Zen 3 Ryzen 5000 Series CPUs but as this is also based on the AM4 socket, it supports Zen 2 (Ryzen 3000 CPUs and Ryzen 4000 Series APUs).

Here is a quick look at the specifications of the B550 Chipset.

Even B550 Chipset based motherboards are aimed at high-end gamers, content creators, professional photo and video applications. Apart from the PCIe 4.0 lanes from the Chipset, B550 has all the bells and whistles that the more expensive X570 has.

Coming to the CPU support, the B550 chipset is primarily aimed to be paired with the Zen 3 based Ryzen 5000 Series CPUs. But even the Ryzen 3000 Series CPUs can be used.

The maximum power draw of B550 Chipset is around 6W. So, unlike X570 Motherboards, the B550 Motherboards doesn’t have any cooling fans on the chipset.

Until now, we have seen the individual specs of the B550 and X570 Chipsets from AMD. To simplify the buying decision, here is a quick B550 vs X570 Chipset comparison.

Differences between B550 and X570 Chipsets

Both X570 and B550 Motherboards supports CPU and RAM overclocking. However, the VRMs on the more expensive X570 tend to be a little bit better when compared with B550 motherboards.

As all the PCIe lanes from X570 are PCIe 4.0, the chipset draws a maximum of around 15W of power. Hence, almost all X570 motherboards have a cooling fan mounted on the chipset. This is not the case in B550 Motherboards.

If you want to configure dual graphics cards in your build, then your motherboard and CPU should support Nvidia’s SLI or AMD’s CrossFire. Both X570 and B550 chipsets support these features but in case of B550 motherboards, only some premium and high-end options support them.

The last and the important difference is the price of motherboards. If you compare the B550 vs X570 motherboards prices, then X570 are a tad bit expensive than B550 options. This has to do with the PCIe 4.0 lanes from the X570 Chipset (which requires expensive PCB), better VRM and also a cooling solution for X570.

Sadly, AMD is moving away from the long serving AM4 socket to a newer AM5 socket for its upcoming Ryzen 6000 Series CPUs. This means that the B550 and X570 motherboards cannot be considered future proof.

From the above comparison between B550 and X570 Chipsets, it is clear that the main factor that separates these two options is the PCIe connectivity from the chipset. All the PCIe lanes from X570 are PCIe 4.0 whereas they are only PCIe 3.0 in case of B550.

But both the chipsets have PCIe 4.0 for the graphics card and M.2 NVMe drive, directly from the CPU. So, as B550 and X570 supports PCIe 4.0 GPU and at least one NVMe storage, price plays an important factor. If you don’t need additional PCIe 4.0 lanes, then a comparatively cheaper B550 Motherboards are the best as they have good VRMs, overclocking support and lots of other connectivity.

But if PCIe 4.0 is your priority, then X570 is the best option. Additionally, you also get better VRMs for sustained overclocking, especially for high-end Ryzen 7 and Ryzen 9 PCUs.

A complete comparison of the two top chipsets from AMD: X570 and B550. We listed out the specifications of both the chipsets, made a comparison of important specs and also tabulated the differences between B550 vs X570 chipsets.