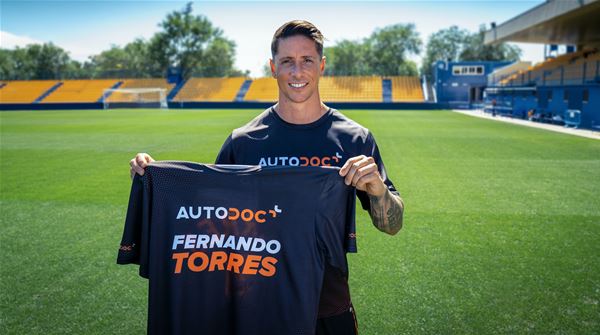 Berlin, November 19, 2021 – AUTODOC, a leading online retailer for vehicle parts and accessories in Europe, has signed up former Spanish professional footballer and FIFA World Cup winner Fernando Torres as the company’s exclusive brand ambassador. A variety of communication activities is planned for the partnership, with a particular focus on social media campaigns. These will be deployed in Spain and the United Kingdom and all other 25 European countries in which AUTODOC is currently active.

“I am really happy that we could secure Fernando Torres as our brand ambassador and partner. Not only is he a top athlete and superstar, known and popular across Europe and the whole world, but he is also authentic and ambitious and always kept his feet on the ground despite his great achievements,” said Max Wegner, co-founder and member of the supervisory board at AUTODOC. “Although he had challenging starting conditions, he made his dream come true – an experience we founders share with him. As he is also a car enthusiast, that makes him the perfect representative for AUTODOC,” Wegner said.

“I am very excited about the partnership with AUTODOC and our upcoming projects. I am really impressed by the story behind the company and can identify with the passion the founders invested in building it from scratch. AUTODOC is a great business with a fascinating growth story, and it offers excellent services for auto aficionados across Europe. I am very happy to join forces with the AUTODOC team,” said Fernando Torres.

About AUTODOC
AUTODOC is a leading online retailer for vehicle parts and accessories in Europe. The company was founded in 2008 by Alexej Erdle, Max Wegner, and Vitalij Kungel in Berlin and has been growing dynamically year after year ever since. In 2020, AUTODOC had revenue of over €842 million (2019: €612 million). AUTODOC has 4 million products for 166 car brands in its range. AUTODOC operates in 27 European countries with 4,600 people working at five locations.

About Fernando Torres
Fernando José Torres Sanz is a former Spanish footballer who played as a striker. He is considered a legend in Atlético de Madrid and in the Spanish national football team. He is the current assistant manager of Atlético de Madrid Juvenil A.

Torres started his career with Atlético de Madrid, and he progressed through their youth system to the first team, where he made his debut in 2001. After playing some outstanding seasons at Atlético, he began his successful stage far from his beloved club. He played for Liverpool, Chelsea and AC Milan and eventually retired at Sagan Tosu in 2019, receiving unanimous honours from football’s world. Throughout his career, he scored 302 goals in 879 professional game appearances.

Torres made his debut for the national senior team at the age of 19 and, as an international, he played 110 matches and scored 38 goals. He holds a set of gold medals for the four most prestigious tournaments in Europe and the world: one World cup, two European Championships, one UEFA Champions League and two UEFA Europa Leagues.