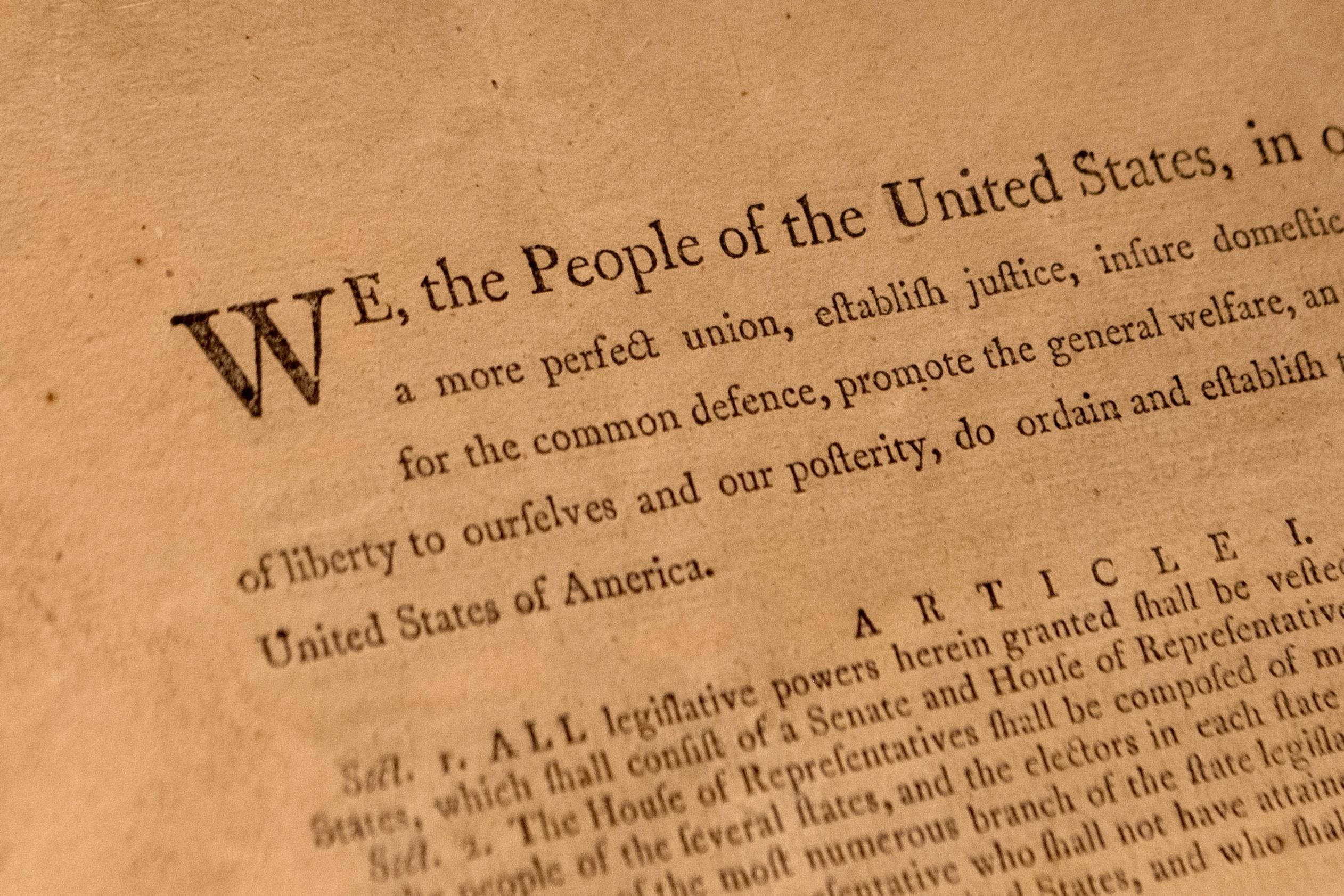 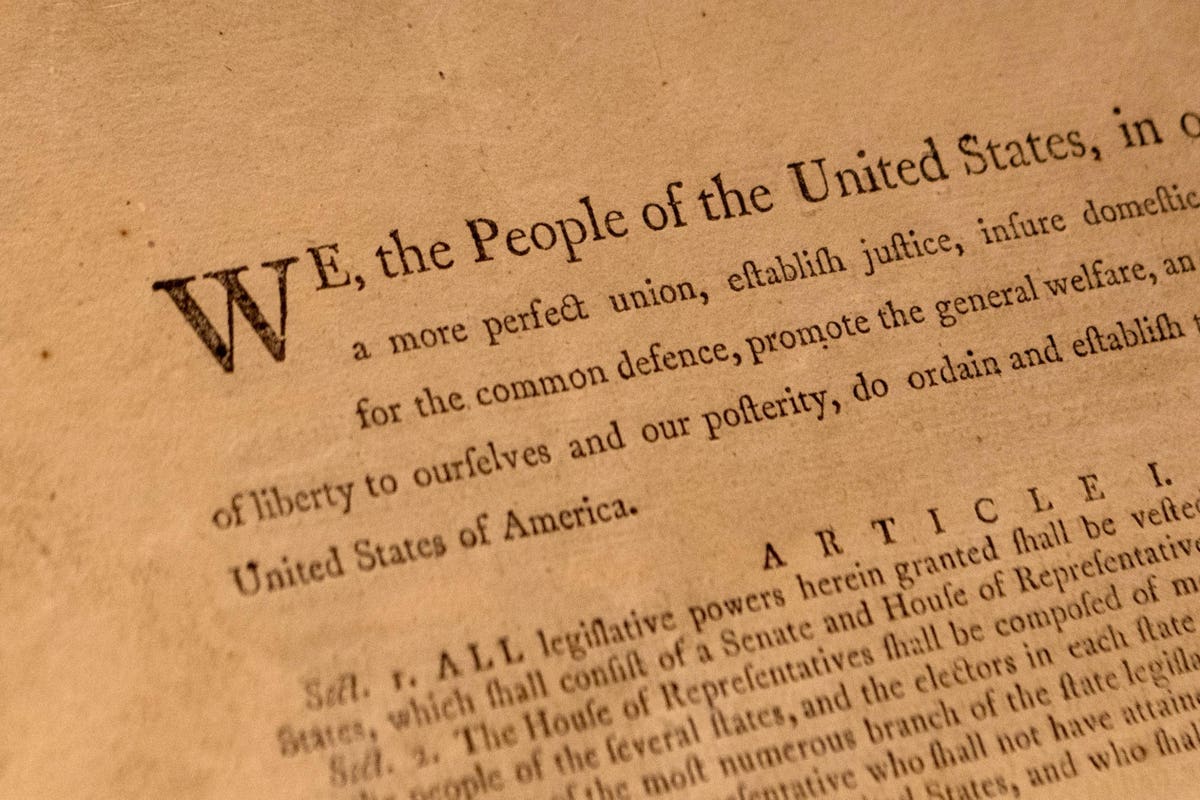 In 1787, drafting the U.S. Constitution required the work of 55 delegates to the Constitutional Convention. They hailed from 11 states—Rhode Island sent no one, the only original colony to do so—and the gathering lasted nearly 4 months, concluding on Sept. 15 after a brutally hot summer. An ailing Benjamin Franklin rode to and from the meetings in a sedan chair carried by four convicts from the local Walnut Street Jail.

By contrast, it has taken less than 48 hours for an internet collective, Constitution DAO, to raise $5 million in an attempt to buy a rare copy of the Constitution coming up for auction at Sotheby’s on Thursday. The document is one of only thirteen surviving copies out of 500 originally made for the Constitutional Congress, and the only one in private hands.

“I’ve found it increasingly fascinating to watch this Cambrian explosion of cool web projects over the last year. The opportunity to actually build one out was something unique,” says Graham Novak, 25. Novak is one of Constitution DAO’s organizers and an associate at 28th Street Ventures, an Atlanta venture capital firm. “The Constitution is incredible,” he says, bidding for it “is this once-in-a-lifetime thing.”

2021 has been marked by a head-turning convergence of social media and finance, on overlap made apparent by the explosion in interest around meme stocks, online communities like the Reddit forum WallStreetBets, cryptocurrencies that are as much as internet memes as stores of value and a soaring market for the digital art and collectibles known as NFTs. These assets are bought online, discussed online and coveted by a swath of young investors whose time is ever increasingly spent online, especially during the past 20 months of the pandemic.

Their exuberance has produced an array of jarring financial figures: One popular meme stock, AMC, for instance, trades for nearly 10 times the movie-theater chain’s sales, triple the average valuation among S&P 500 companies—suggesting that AMC investors see the company’s future growth far outpacing the broader market’s despite the obvious challenges that movie theaters face. Meanwhile, NFTs racked up nearly $11 billion in trading volume last quarter, a 700% increase from the previous one, as investors eagerly bought JPEGs of cartoon apes and video trading cards of basketball stars. The art market’s biggest sale of the year was an NFT, a digital collage by the artist Beeple sold at Christie’s for $69.3 million.

Groups like Novak’s—DAOs or digital autonomous organizations—are the latest thing. Two months ago, another such group, PleasrDAO, purchased the Wu-Tang album formerly owned by Martin Shkreli for $4 million. Given that acquisition and the internet’s continued ability over the past year to quickly steer great sums of money toward novel goals and products, Constitution DAO’s hastily orchestrated plan to buy the Constitution on Thursday doesn’t seem nearly as trifling as it might’ve a year ago.

How does this all work? A DAO (pronounced “dow” like the stock exchange) records its membership on the digital ledger system known as the blockchain, and those members do things like vote to govern the group’s decisions. They meet not in person but through chat apps like Discord and other messaging platforms. Joining one often requires a monetary buy in: To do so, you use cryptocurrencies to buy blockchain-based assets called tokens, digital chits that entitle their owners to voting power within the group. The more tokens you own, the more voting power you have. In Constitution DAO, one Ether (roughly $4,600) buys 1 million tokens. Constitution DAO calls its tokens “People,” just as we refer to the legal tender in America as “dollars.”

In many ways, a DAO is a super-charged mix of the elements that have recently interwoven finance and the internet: A previously unknown group of young people are today able to raise millions of dollars overnight, a task that would’ve once fallen to pedigreed financiers embarking on a multi-week, if not multi-month, sales trip.

DAOs at once representative an revolutionary force—rewriting some of business’ oldest rules prioritizing age, safety and experience—and a disruptive danger in equal measure. Cryptocurrency is already inherently more risky than traditional investments when you personally manage the purchases. It is even dicier to turn over the decision to someone else, particularly when trusting funds to a semi- or fully anonymous investment committee like a DAO. DAOs purposefully operate purposefully outside of traditional financial structures, unbeholden to any government regulations. Their investors don’t have even the limited protections carried by other high-risk pooled investments like hedge funds.

Some of this stuff has gone up in smoke. In 2016, one of the earliest DAOs suffered a hack with the attackers absconding with $50 million, which was never recovered. A more recent example from the crypto world: In October, a new cryptocurrency floated onto the market called Squid, designed to capture the attention of fans of the hit Netflix show Squid Game. It was pretty apparent that Squid had no underlying value and no formal connection to the TV series. Nonetheless, people spent weeks bidding up the tokens’ price, raising it from fractions of a penny to nearly $600 a token.

Then, earlier this month, the anonymous issuers of Squid disappeared, apparently making off with $2.5 million in investors’ money.

By all appearances, Novak and the other leaders of Constitution DAO are operating with the best of intentions. They’ve listed themselves publicly on Twitter, and they hope that tying their names to the project in a high-profile fashion will encourage investor confidence in their project.

The idea for Constitution DAO arose last Thursday in a text-message exchange between Novak and a friend, Austin Cain, a 25-year-old financial advisor in Atlanta. Novak had noticed earlier news coverage of the Sotheby’s auction and thought the irony of purchasing a document that outlined how to govern a large group of people might appeal to a investment fund governed by a large of people.

They put out a call for help on Twitter, leading to a “spontaneous combustion” of interest from across the site, says Cain. “We needed to get this in the hands of as many smart as possible. It got retweeted. People started collaborating.” Novak, Cain and some of the other initial organizers met on a Zoom call on Thursday evening. The assembly included people like Julian Weisser, 31, a cofounder of recruiting startup On Deck. “People have a very distinct relationship with America and the Constitution, why wouldn’t you want to be part of a collective experience of purchasing it?” he says. Another participant: Anisha Sunkerneni, 26, an investor at a small crypto-focused VC firm, Cyphr. “I wanted to build something fun with my friends,” she says. “I joined, and it kind of snowballed from there.”

On Thursday, the organizers launched a Twitter page for Constitution DAO, which has been a key fundraising platform. Further coordination came through a Discord group as they settled into roles—marketing, PR, website development—over the weekend. A webpage for Constitution DAO went up on Sunday, allowing people to purchase People tokens using Ether. Within a day, it had raised over $3 million, By Tuesday morning, it crossed the $5 million threshold. Over 11,000 people have joined its Discord group.

They’ll need considerably more to win Thursday’s auction. Sotheby’s expects the Constitution could fetch as much as $20 million. It was last sold for $165,000 in 1988 to S. Howard Goldman, a New York real estate developer. He died in 1997, and the document has remained with his widow, Dorothy. She plans to donate the proceeds to her foundation, which supports constitutional scholars.

If Constitution DAO wins, its organizers plan to let its members vote on what to do with the artifact, though generally speaking, the prevailing idea is to make it publicly viewable. Some DAO members have already been in touch with museums about displaying the document. The final decision may be out of the hands of the people who got this going. The DAO’s initial organizers—a collection of more than a dozen people—didn’t grant themselves any tokens at the beginning, a common move in other DAOs.

“We may ask for the community to vote on granting the core team tokens as a sign of gratitude if we win,” says Weisser. “And I think that the community would be grateful for that. They seem to be very appreciative of all the hard effort we’re putting in to coordinate, you know, 11,000 people.”

Winning the auction will take a bit of gamesmanship. It’ll be clear to other prospective buyers exactly how much the DAO can spend, while those rival bidders can keep their intentions and spending power obscured. If Constitution DAO comes up short, the organizers say they’ll refund the money entirely.

Bidding for a rarity like this will likely put the collective up against some of the world’s richest people, collectors who may have the opposite intentions of the DAO: to buy the Constitution and display it privately.

“Candidly, it’ll be fun to be bidding against those people,” says another Constitution DAO organizer, Brian Wagner, 30. As a day job, Wagner is cofounder of Roadtrip FM, a music streaming startup. “They’re billionaires—old collectors who just want to lock this stuff away and keep it to themselves. That’s why everyone wants to get involved with this because people can actually collectively own this and decide what to do with it.”