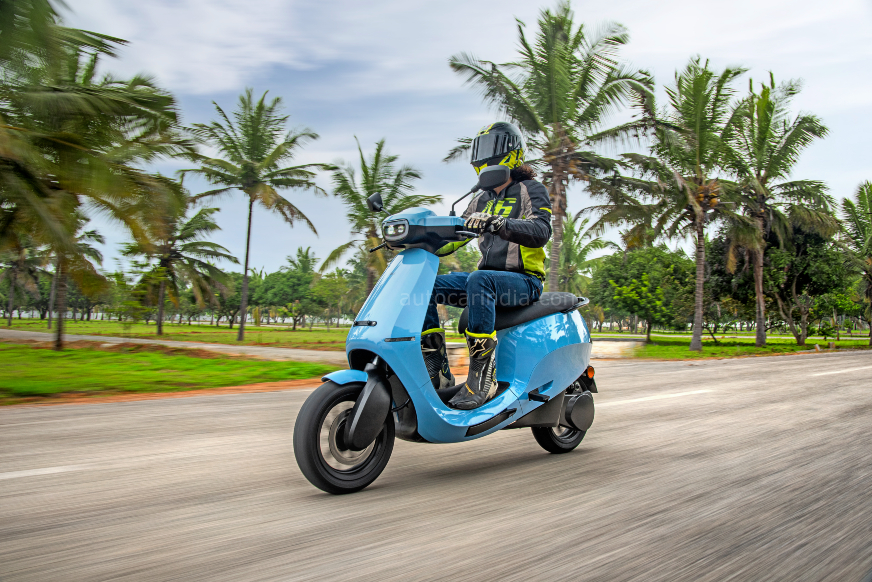 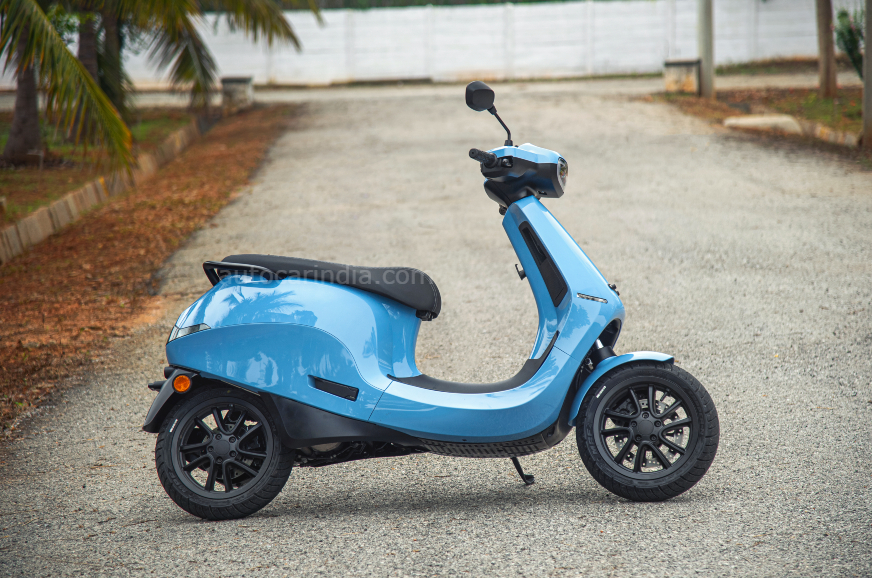 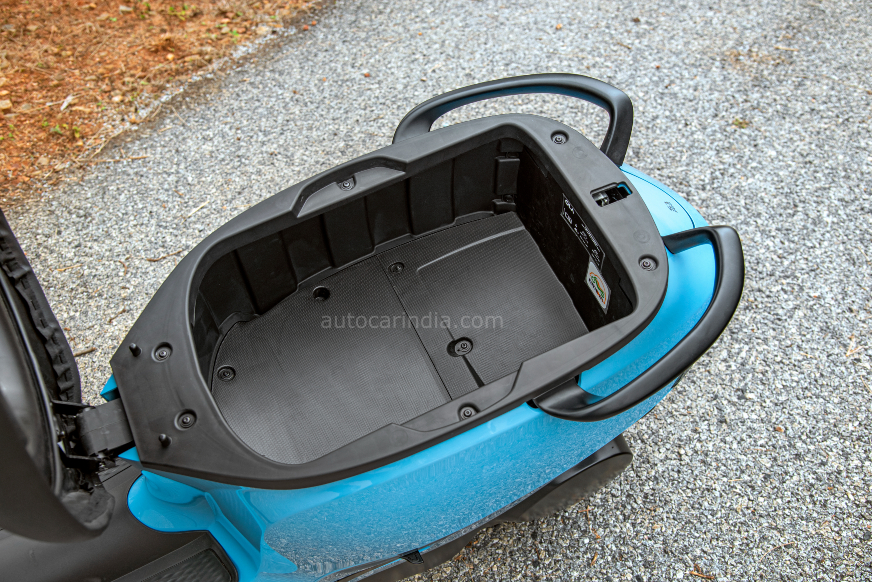 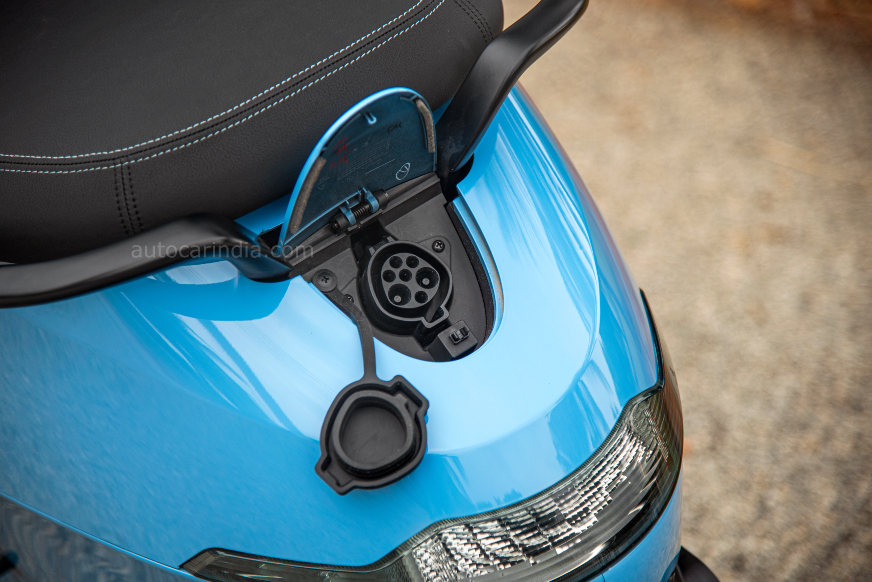 Can the hotly tipped Ola S1 Pro match the massive hype the company has built around it? We get our first impression in a short test ride.

That the future of mobility is electric seems to be doubtless at this point. But how that electric vehicle market is going to be carved up amongst the players is a very interesting story that’s yet to completely pan out. In the realm of competent high-speed electric scooters, the market is currently ruled by Ather Energy, with major players like Bajaj and TVS slowly catching up. But the biggest splash so far has been made by Ola Electric, and its impressive (on paper) S1 and S1 Pro e-scooters. We recently had a short go on the latter, the more premium of Ola’s offerings, and these are our findings. 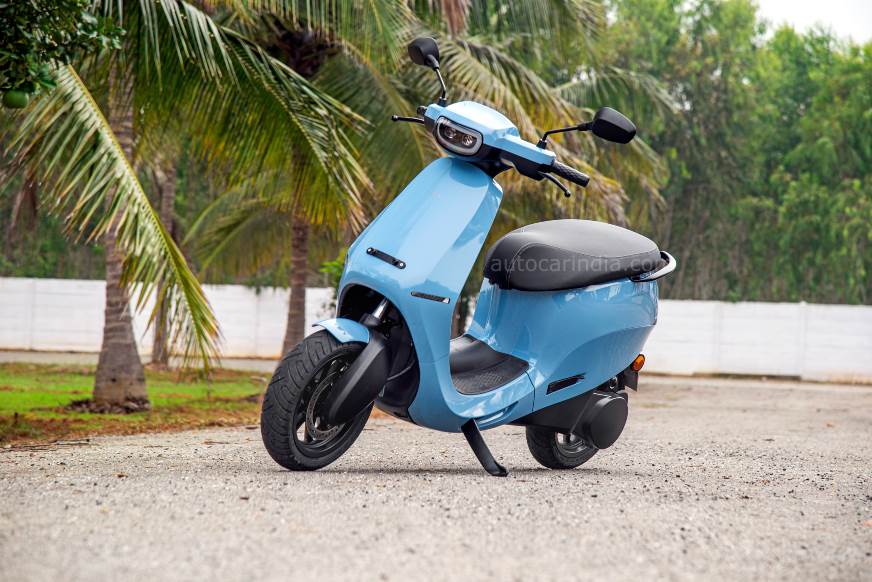 Getting up close to a vehicle for the first time is always a special affair, especially when it’s one as neat-looking as the S1 Pro. I hadn’t had a chance to check it out at the launch event three months ago, and even if I had, the scooters were cordoned off at that point, rather dampening the intimacy. So, this was my first impression of the Ola scooter, and it was a rather positive one. It doesn’t exactly wow you with its design, since it sports a rather understated look that’s defined by clean lines and no frills. But it’s a crisp and modern look befitting an electric scooter, and I certainly found it pleasing to look at. Whether this subtle design will be welcomed by a market that’s full of chrome inserts and loud graphics, time will tell. 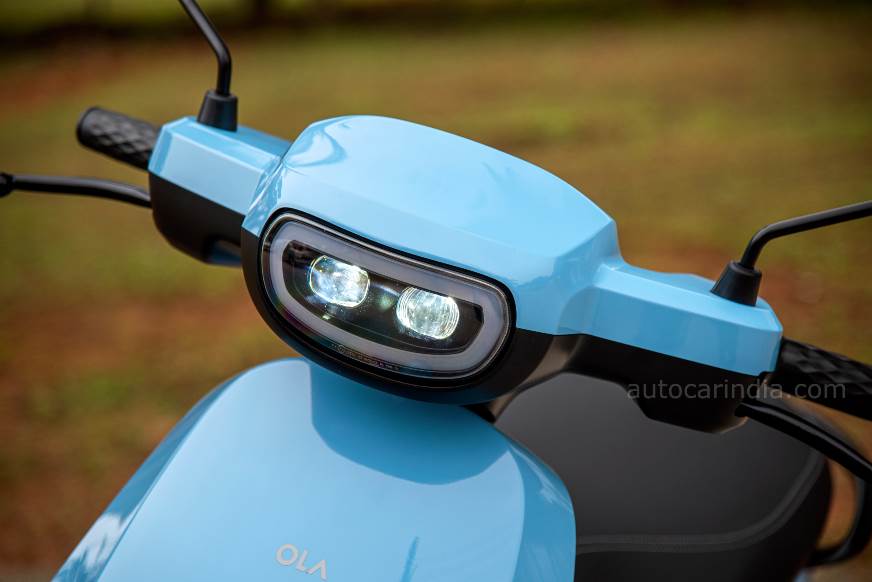 Diving in for a closer look only reinforced the positive first impression, thanks to good quality and finish levels. Shut-lines and panel gaps are tight and consistent, switchgear quality is good, and the materials used don’t feel cheap, even if they don’t feel lush either. Overall, the S1 Pro looks and feels like a well-finished and production-ready vehicle, barring a few exceptions like a flimsy side-stand and oddly rubber-mounted grab rails.

The exploration then extended to the 7.0-inch TFT touchscreen and it made a fine first impression of its own, with great resolution and brightness, and excellent responsiveness. Ola’s UI is fairly intuitive, but while I could get my phone paired up via Bluetooth, I couldn’t check out the navigation feature due to a persistent network issue with the scooter’s built-in eSIM. It also features the usual music playback control and phone call control, but the more unique features promised by Ola – like cruise control and music playback through the scooter’s own features – were not activated and will apparently  only be made available at a later date via OTA updates. 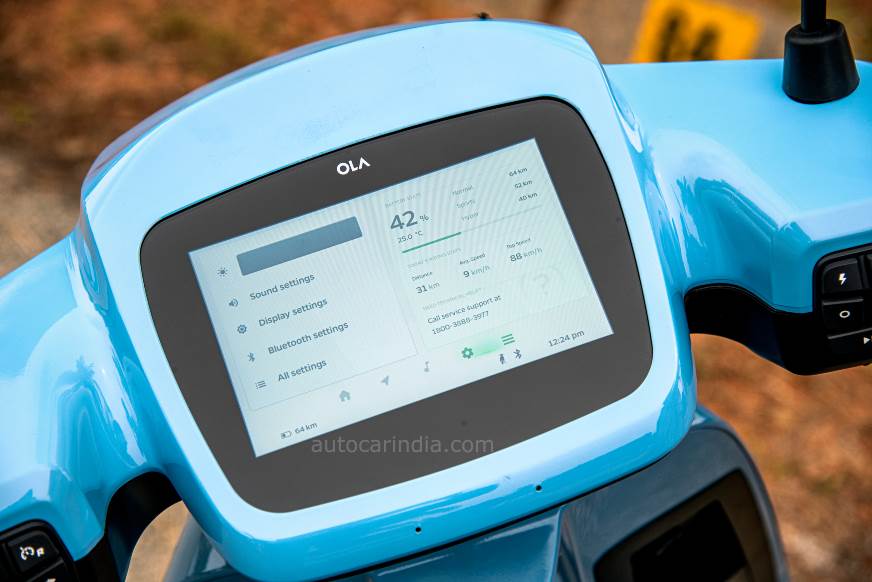 Everything so far had been quite novel, but the beginning of the ride experience is where it all became radically different. The S1 Pro has no physical key of any kind, the scooter is unlocked by either entering a six-digit code on the touchscreen or by using a mobile phone app. Ola says that, in the future, it will also roll out a proximity unlock feature supported by Bluetooth. Unlocking the S1 Pro’s large but unlit 36-litre underseat storage compartment is also done using the touchscreen, which does raise the concern about what happens if the scooter runs out of charge and you have belongings inside the boot. Well, Ola says that the battery will always have a certain amount of residual charge, which will be enough to open the boot when a command is given from the mobile phone app. The app in question isn’t available on any online app store yet, so we’ll have to get to that at a later stage.

After much tinkering at a standstill, I finally set off, hoping to explore the scooter’s three riding modes – Normal, Sport and Hyper – the latter of which the standard S1 misses out on. Our ride was restricted to a gated colony, where we circuited a roughly 2km loop that comprised paved roads sparsely littered with uneven manhole covers, undulations and bumps, patches of gravel and sand, and some inclines. So, it was reasonably representative of what our roads are like, with the exceptions being the lack of any massive potholes, speed breakers, and of course, traffic. 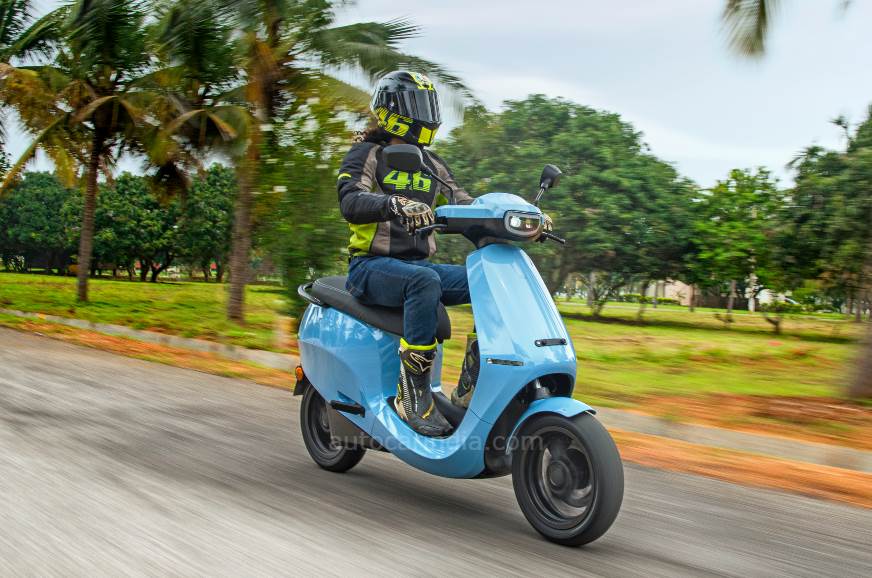 Of course, it’s wonderful how EVs have zero operational emissions and fewer moving parts, and are silent and smooth, but my favourite thing about them has to be their instant torque and acceleration. So, of course, I started my testing in Hyper mode. In this mode, Ola claims the 8.5kW permanent magnet motor takes the S1 Pro to 40kph in 3.0sec, which sounds quite rapid. And from the seat, it felt quite rapid. There was a slight sluggishness off the line, but once past that, it pulled with a ferocity that you don’t really expect from an urban scooter. We didn’t have a chance to carry out our performance tests, but I’m quite certain that this is one of the fastest accelerating scooters you can buy in India today.

The taper-off isn’t drastic as the speeds rise, and we just about managed to cross an indicated 100kph on our route, but the road surface on this straight stretch was quite bumpy, so the scooter didn’t exactly feel sure-footed. How stable it will be at its claimed 115kph top speed on its small 12-inch wheels, we’ll have to find out at a later date. 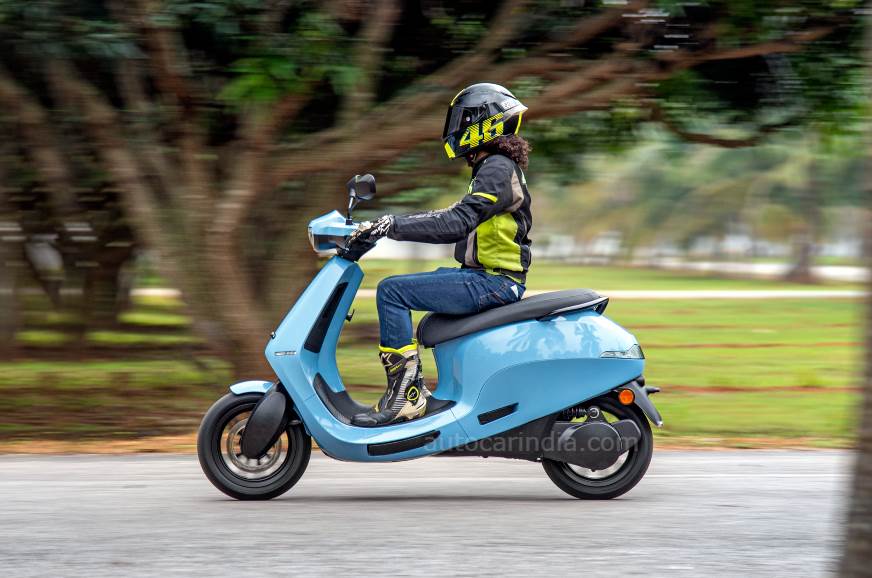 But all this performance came at a cost. After about 10 minutes of sustained riding in Hyper mode, there was a drastic reduction in performance that came without any warning or error message on the TFT dash. Top speed and acceleration were both significantly dulled, and by the end of it, the scooter felt downright lethargic, barely able to pick up speed going up an incline. After leaving it stationary for about 5-10 minutes, the performance began to return, indicating that this is probably a thermal issue with either the motor or the battery. Ola says that it will work on this, and that it can be fixed with better software management, but we’ll have to see how that pans out. As things stand today, a number of scooters at the test location faced a severe reduction in performance after about 10 minutes of riding in Hyper mode.

Under full throttle acceleration in Hyper mode, we also encountered a droning vibration through the seat and floorboard that became noticeably more pronounced as the miles racked up and as the performance drop-off increased. There was also one instance where the motor completely died, not responding to throttle inputs at all, in any of the modes. This rectified itself after a couple of restarts.

It’s also worth noting that we rode these scooters on a crisp, cool winter morning in Bengaluru, and the thermal issues pertaining to the powertrain could well be more pronounced in a hotter environment and when stuck in traffic. With Ola targeting the entire nation with these scooters, it’s unquestionable that swift progress needs to be made on this front. 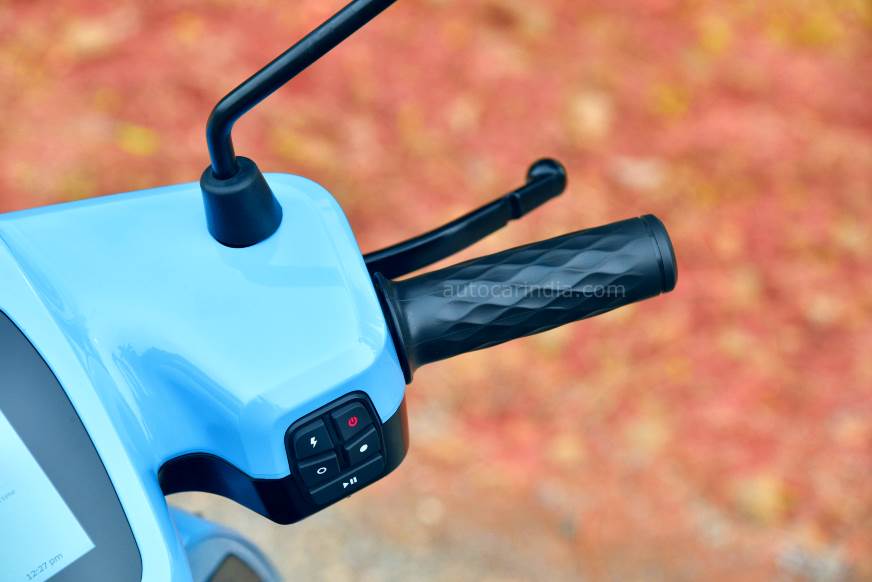 But the more pressing issue, though, was throttle calibration. The throttle works quite similarly to something like the Ather 450X, where you twist it conventionally to accelerate, and twist it the wrong way to dial-in regen. But a number of scooters on site continued to surge forward for about half a second after the accelerator had been completely released, which is a little startling to say the least, and very much a safety hazard. Again, Ola says that it is working on this and should be able to fix it with a software update, but we’ll have to wait and see how that plays out. If Ola can indeed sort these things out with a software update, it will be interesting to see if they can do so without watering down the performance.

Undeniably, the powertrain has room for improvement, but one area where Ola has excelled is the chassis. The Gabriel-sourced single-sided front suspension and horizontally-mounted rear shock delivered excellent ride quality that put many conventionally-sprung scooters to shame. It’s a very well-balanced setup that manages to flatten out most bumps while still offering great body control, and the ride felt plush, irrespective of whether it was my lone lightweight frame or a pair of occupants on board. And while this is no corner carver, it did have that scooter-typical razor-sharp turn in, and felt confident enough when leaned over, so long as the lean angles were kept reasonable. 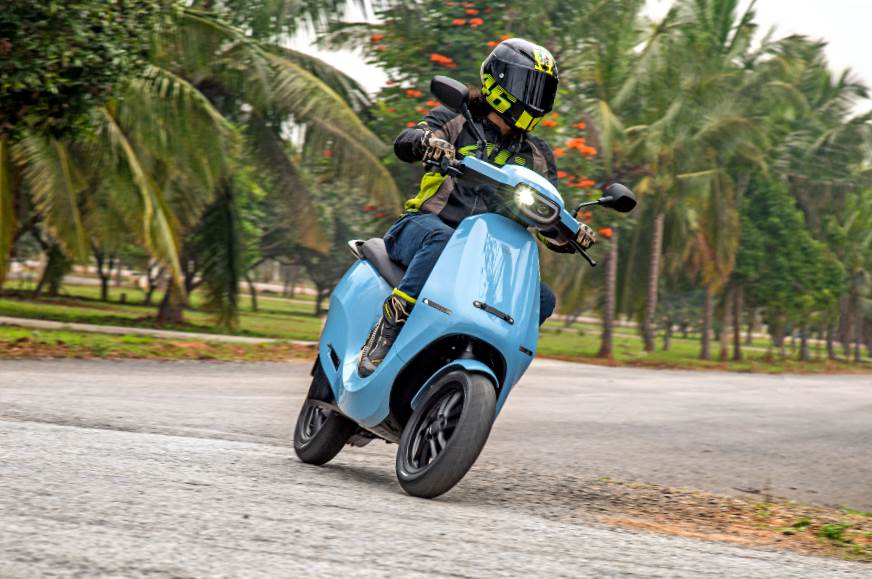 The brakes stopped the scooter quickly and felt quite sharp; perhaps a little too sharp for a vehicle of this nature, especially since there is no ABS and little modulation or feel at the lever, leading to easy lock-ups, especially at the rear.

This is a scooter, so convenience and practicality are high up the priority list, and the S1 Pro helps its cause with features like a reverse mode. But the large underseat compartment is just as well, because the floorboard isn’t the most accommodating. There is a lack of space, which is exemplified by the curvature from the apron to the floorboard, as well as the prominent spine section, which will limit the ability to carry stuff on the floorboard – something we Indians love to do with our scooters. The lack of space is a function of the scooter’s compact dimensions, and that extends to the seat as well, which felt cramped with two full-sized occupants on it. 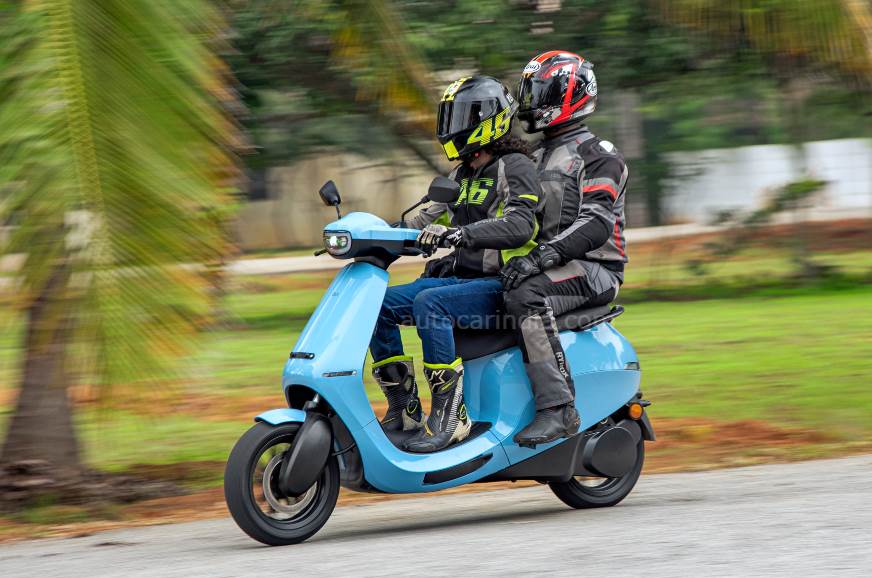 Ola S1 Pro: should you buy one?

There certainly is a lot of potential in the Ola S1 Pro. At a price of Rs 1.10 lakh (ex-showroom, Delhi, after FAME-II and state subsidies), it’s considerably more affordable than something like an Ather 450X (Rs 1.32 lakh), and even more affordable than the 450 Plus (Rs 1.13 lakh). This is a very attractive price point, and a lot of things on the S1 Pro are in place – the design is nice, finish levels are good, and the chassis is well sorted out. But there are also some fundamental shortcomings with the powertrain that Ola needs to address. Moreover, given our brief time with the scooter, we cannot comment on vital factors like the range and charge times.

But the scooter is just one small part of the puzzle. Another big piece of this puzzle is Ola’s attempt to rewrite the rules of sales and service. If you want a test ride, they will send a scooter home, if you then book a scooter, it will be delivered to your doorstep. When you need to service it, you call them home and they service it for you; even if you have a small squeaking sound that’s bothering you, you ring them up and they come home – it’s all quite radical and will take some figuring out. Ola needs to figure all this out quite quickly, because its claims suggest that it has close to 1 lakh scooters to deliver. Hype can only go so far and it’s now time for the company to start delivering on its incredible claims. The next few months will be very interesting.