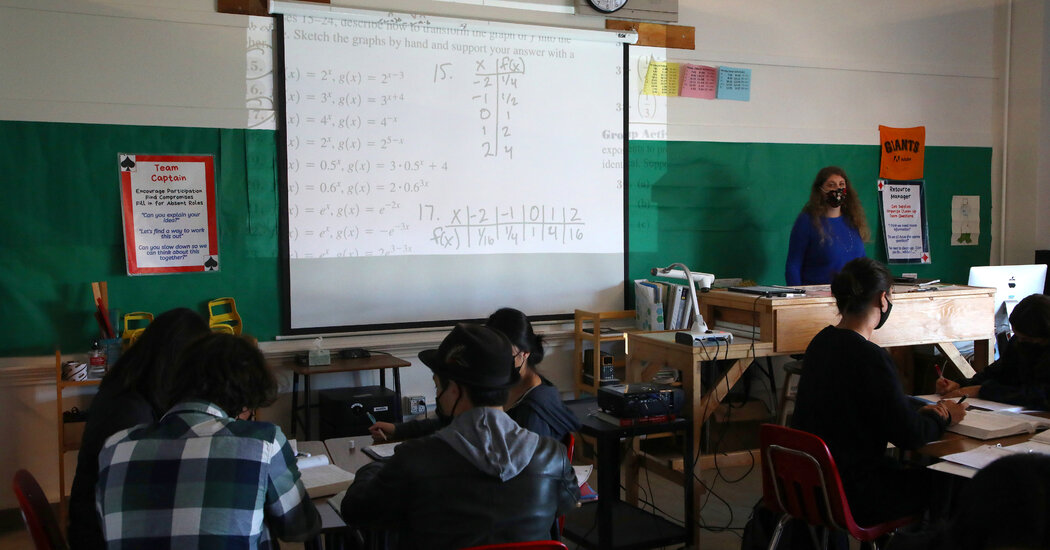 Do you like math? Do you think your teachers have done a good job in teaching you math over the years?

California has proposed new guidelines for how math is taught in public schools. The recommendations de-emphasize calculus, reject the idea that some children are naturally gifted and build a connection to social justice. However, the proposal hasn’t been adopted yet. Instead, it has set off a fierce debate.

Do you think math education needs an overhaul so it sets up more students for success and is more useful for work and life? Or do you think the way math is taught should largely stay the same?

In “California Tries to Close the Gap in Math, but Sets Off a Backlash,” Jacey Fortin writes about the state’s new proposed standards and the reaction they have received:

The California guidelines, which are not binding, could overhaul the way many school districts approach math instruction. The draft rejected the idea of naturally gifted children, recommended against shifting certain students into accelerated courses in middle school and tried to promote high-level math courses that could serve as alternatives to calculus, like data science or statistics.

The draft also suggested that math should not be colorblind and that teachers could use lessons to explore social justice — for example, by looking out for gender stereotypes in word problems, or applying math concepts to topics like immigration or inequality.

The battle over math pedagogy is a tale as old as multiplication tables. An idea called “new math,” pitched as a more conceptual approach to the subject, had its heyday in the 1960s. About a decade ago, amid debates over the national Common Core standards, many parents bemoaned math exercises that they said seemed to dump line-by-line computation in favor of veritable hieroglyphs.

Today, the battles over the California guidelines are circling around a fundamental question: What, or whom, is math for?

Testing results regularly show that math students in the United States are lagging behind those in other industrialized nations. And within the country, there is a persistent racial gap in achievement. According to data from the civil rights office of the Education Department, Black students represented about 16 percent of high school students but 8 percent of those enrolled in calculus during the 2015-16 school year. White and Asian students were overrepresented in high-level courses.

“We have a state and nation that hates math and is not doing well with it,” Dr. Boaler said.

Critics of the draft said the authors would punish high achievers by limiting options for gifted programs. An open letter signed by hundreds of Californians working in science and technology described the draft as “an endless river of new pedagogical fads that effectively distort and displace actual math.”

The guidelines recommend changes in the way math is taught and how students are grouped:

Like some of the attempted reforms of decades past, the draft of the California guidelines favored a more conceptual approach to learning: more collaborating and problem solving, less memorizing formulas.

It also promoted something called de-tracking, which keeps students together longer instead of separating high achievers into advanced classes before high school.

They also want to de-emphasize calculus in the sequence of high school math classes:

Tracking is part of a larger debate about access to college. Under the current system, students who are not placed in accelerated courses by middle school may never get the opportunity to take calculus, which has long been an informal gatekeeper for acceptance to selective schools.

According to data from the Education Department, calculus is not even offered in most schools that serve a large number of Black and Latino students.

The math taught in U.S. schools hasn’t materially changed since Sputnik was sent into orbit in the late 1950s. Our high school students are taught algebra, geometry, a second year of algebra, and calculus (for the most advanced students) because Eisenhower-era policymakers believed this curriculum would produce the best rocket scientists to work on projects during the Cold War.”

What we propose is as obvious as it is radical: to put data and its analysis at the center of high school mathematics. Every high school student should graduate with an understanding of data, spreadsheets, and the difference between correlation and causality. Moreover, teaching students to make data-based arguments will endow them with many of the same critical-thinking skills they are learning today through algebraic proofs, but also give them more practical skills for navigating our newly data-rich world.

Do you agree with Dr. Boaler that statistics and data analysis should be a core part of the high school curriculum, instead of making calculus the be-all and end-all for high-level, high school math instruction? Does your school seem to value calculus over other math classes? Should the sequence of high school math classes change so calculus isn’t seen as the ultimate goal?

Why You Should Have An Employee Training Manual