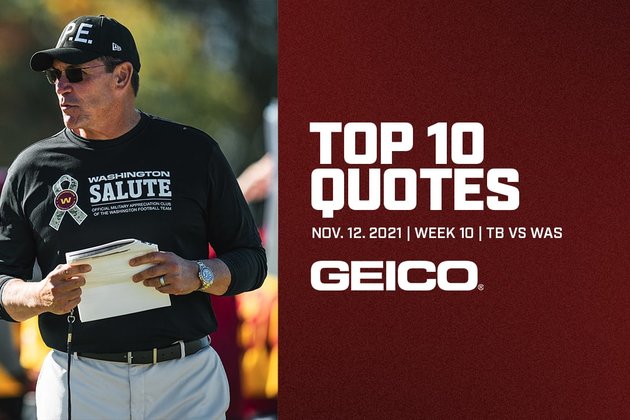 The Washington Football Team is set to take on the Tampa Bay Buccaneers for Week 10. Here are some of the top quotes from the week, presented by GEICO.

“They bring a lot of different challenges. I mean, every year is different, but they’ve kind of fed off the success that they had, obviously winning the super bowl. They got a lot of veteran guys that have had a lot of success over the course of their career. Really talented in the front seven. They’d been banged up a little bit in the secondary but they’re getting some of those guys back and they got young safeties that are playing well. And then, you know, it’s a veteran corner, you got a lot of tape on them. They’re the third year in the system. Coach Bowles does a really good job of mixing it up. They do a lot of different stuff on defense. They give you a lot to prepare for. The toughest thing though, to answer your question is just, they got a lot of talented guys and they play well together. Anytime you get that combination, it’s gonna be difficult.”

“Yeah, I mean, that’s a great question. Their offense is full of a really, really special talent – receiver position, tight end position, running back position. A good assembly of talent. We’ve just got to go out and play hard and compete and that’s what we do. We get ourselves ready. We prepare and then we go out and compete. I’m looking forward to it come Sunday.”

Ron Rivera on the importance of trying to keep coming to work fun for a team that is on a losing streak:

“Well, I think that’s a very good question just because of the fact that it does get hard. It gets hard to come to work when you’re not winning. People look at you different, people act funny, and the truth of the matter is, that is the nature of this game. Somebody’s got to win, someone’s got to lose. How you handle it, how you work through it, how you work with it, how you live within it, that’s ball. I’ve been fortunate that I’ve been around a long time, and I’ve gone through both sides of it. It is hard, but somebody once told me it takes a lot of energy to be negative. It doesn’t take a lot to be positive.”

Taylor Heinicke on looking back on the Tampa Bay playoff game last year:

“Yeah, again, that game is probably the reason I’m still here. So it’s actually a good film to watch, obviously it’s our offense against their defense. We’ve been watching a good bit and it brings back good memories and stuff. But again, it’s a new challenge this week, so hopefully we can have a better outcome this year, go get a win and go from there.”

Ron Rivera on if a healthy offense gives you a better chance to reach consistency:

“I think it does. I think offensive and defensive football and special teams in football, all three elements, go hand in hand. I think the biggest thing that we have to be able to do is, and again, the last couple of games who knows if we put some points on the board and we get in the red zone, how does it impact the defense. Go back earlier and say, well defensively, we have done a couple of things that have gotten off the field on third downs. How would that have impacted the offense? But both sides have to play at the same level with the same level of consistency at the same time to give us an opportunity.”

Scott Turner on potentially getting Sam Cosmi and Brandon Scherff back:

“Yeah, and Cornelius [Lucas] was out this past game too. Just getting those guys back is big. Sam is a good, young player that I feel like is even getting better. It’s a shame he got hurt as a rookie because I feel like he’s gotten better and better every moment that he’s been here going back to the offseason. So getting him back on the field would be great. And then Brandon is one of, if not the leader of our offense. He’s an All-Pro player and to get him back on the field is a no brainer, a huge bonus. He brings a lot of physicality and toughness and just the overall leadership to that group.”

Taylor Heinicke on how he’s evolved as a quarterback:

“I don’t know how much I’ve evolved as a quarterback. Again, it’s only been eight weeks. I feel like I’m getting better every week and I’m learning something every week. But again, my life has changed dramatically. I thought I was done with football last year. So since that game until now, made some good money and just feel a lot more comfortable in life. It’s a totally different feeling from what I was feeling this point last year.”

Ron Rivera on how he feels coming out of the bye week:

“No, I’m fine. The hard part for me is I get the reports from the coaches. I read those reports and you read them in detail and you look at what we see and what we think. My big thing always when I get the reports from the other guys and their write-ups is I want to see if I’m close to what they’re thinking. That’s important to me is making sure we’re all on the same page. We all see the same things. And we all believe and feel that we can do certain things that we can do certain things better. We need to change certain things. That’s the thing that I appreciated was looking at these things and really seeing where everybody is in terms of how we feel about our football team and what we do. Now, it’s a matter of taking those things and making sure we’re implementing them, making sure that we’re following through on all the things that we talked about. We have to hold ourselves accountable to what we said and I thought those meetings went well.”

Jack Del Rio on the defensive mentality coming out of the bye week:

“Yeah, I think our guys are on point. I think we’re preparing hard. I think the energy remains strong, which is important. I’m excited to get into the second half and compete. I liked the mindset that we’re approaching it with. Clearly, we put ourselves behind the eight ball. We’ve got a lot of work to do, but we’re embracing the challenge and looking forward to it.”

“I think Terry has obviously done a nice job. I don’t think about that as much just because I’m working on a week-to-week basis. I think that when you look at what we’ve done, our guys have done a pretty good job of getting him the ball. There’s a bunch of opportunities where we could have done better. I think that’s the case for a lot of our guys. Terry, the thing that he does is we don’t judge him off of the stat sheet. We judge him off of what he does on a play-by-play basis and what is his job and the separation he’s getting. He’s done a really good job of focusing on that and understanding that control the controllables. Him doing that I think has led to the success that he’s had. Because there’s a lot of guys that I’ve seen that have been in that situation. There are stretches where the ball doesn’t necessarily go your way and they let that affect them. And then all of a sudden, the ball does come your way and you’re not doing what you’re supposed to do and it doesn’t work out. Terry’s been reliable really every play. Nobody’s perfect but he does an outstanding job of working to get better, doing what he’s coached to do and then making the most out of the situations when his number is called up.”