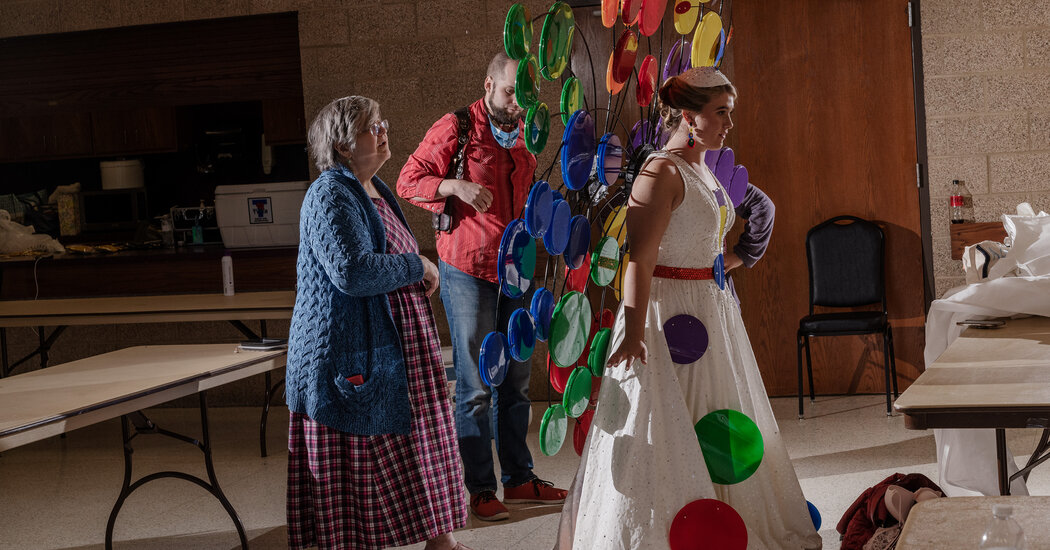 Where do you live? What sets it apart from other places? Do you know your area’s history? What is especially interesting about your hometown?

If you were asked to speak to a room full of strangers for a few minutes about the place you are from, what things would you tell them?

In “The Rose Queen of Texas,” Alex Schechter writes about Tyler, Texas, and its longstanding tradition of celebrating the town’s history of producing roses for the floral industry. The article begins:

TYLER, Texas — Early on a recent Saturday, the townspeople of Tyler staked out spots along the Texas Rose Festival parade route. Marching bands boomed, convertibles honked, and T-shirt guns fired into the cheering crowd. Fourteen floats bore coteries of young women in whimsical, garden-themed gowns that wouldn’t have been out of place on the set of “RuPaul’s Drag Race.” The Apache Belles, a local dance troupe dating back to the 1940s, shouted, “Tyler, Tyler, we are the best!”

But the best, in fact, was yet to come. As the penultimate float rounded the bend near the high school football stadium, there was a flurry of excited whispers. Spectators craned to see past the twirling batons and John Deere tractors. A little girl tugged on her mother’s sleeve and pointed to a pink blur in the distance. “Here she comes!” she said. “Look, it’s the queen!”

Slender and fair skinned, the Texas rose queen glimmered in her pink layered organza and lamé gown. A silk-trimmed train bursting with giant ribbon roses, and weighing 42 pounds, unfurled behind her. Her head was dwarfed by a gold-plated crown studded with Swarovski crystals and enamel roses. Children gathered at the hem of her skirts, the girls in white lace gloves, the boys in gold vests and ruffled collars.

The queen was Anna Grace Hallmark, a 20-year-old business major at the University of Mississippi and a Tyler native. She waved benevolently to her subjects, many of whom were seeing her for the first time.

They had waited a long time. Ms. Hallmark had been scheduled for the 2020 parade, but when that was postponed because of the pandemic, her title was transferred to the following year, which makes her the longest-reigning queen in the festival’s 88-year history.

The article also explains the role that rose growing has played in Tyler’s past and its present:

After a heyday in the 1950s, rose production in Tyler has cooled. Chamblee’s Roses, a local nursery started in 1953, still plants over 200 varieties each year, though many are trucked in from states like California and Arizona. Still, roses remain a big business: 80 percent of the country’s roses are processed in Tyler. In nearly a century, the Texas Rose Festival has been canceled only once before the pandemic: during World War II.

Tyler’s devotion to its showy, perfumed export, and the iconography that’s grown out of it, is a quirk in a state largely built on oil and cattle fortunes. The city crest is a rose, and it is stamped on everything from trash cans to trail markers to the local water tower. The two biggest events on the city’s social calendar involve flowers: the October rose festivities and an azalea trail that blooms in the spring.

In downtown Tyler, you can order a matcha latte with rose syrup, snack on rose-flavored cinnamon rolls, buy rose beard oil or pick up a pack of seeds at Chamblee’s Rose Nursery. (On certain mornings, a white van parks outside the Smoothie King on Broadway, selling fresh cut roses for $3 per dozen.) Roses first came to Tyler in the 1920s, prompted by an agricultural disaster: A decade earlier, quadraspidiotus perniciosus — better known as the San Jose scale — decimated the city’s peach crop. Growers shifted their attention to roses, and the thorny things thrived, thanks to Tyler’s sandy soil and typically mild winters.