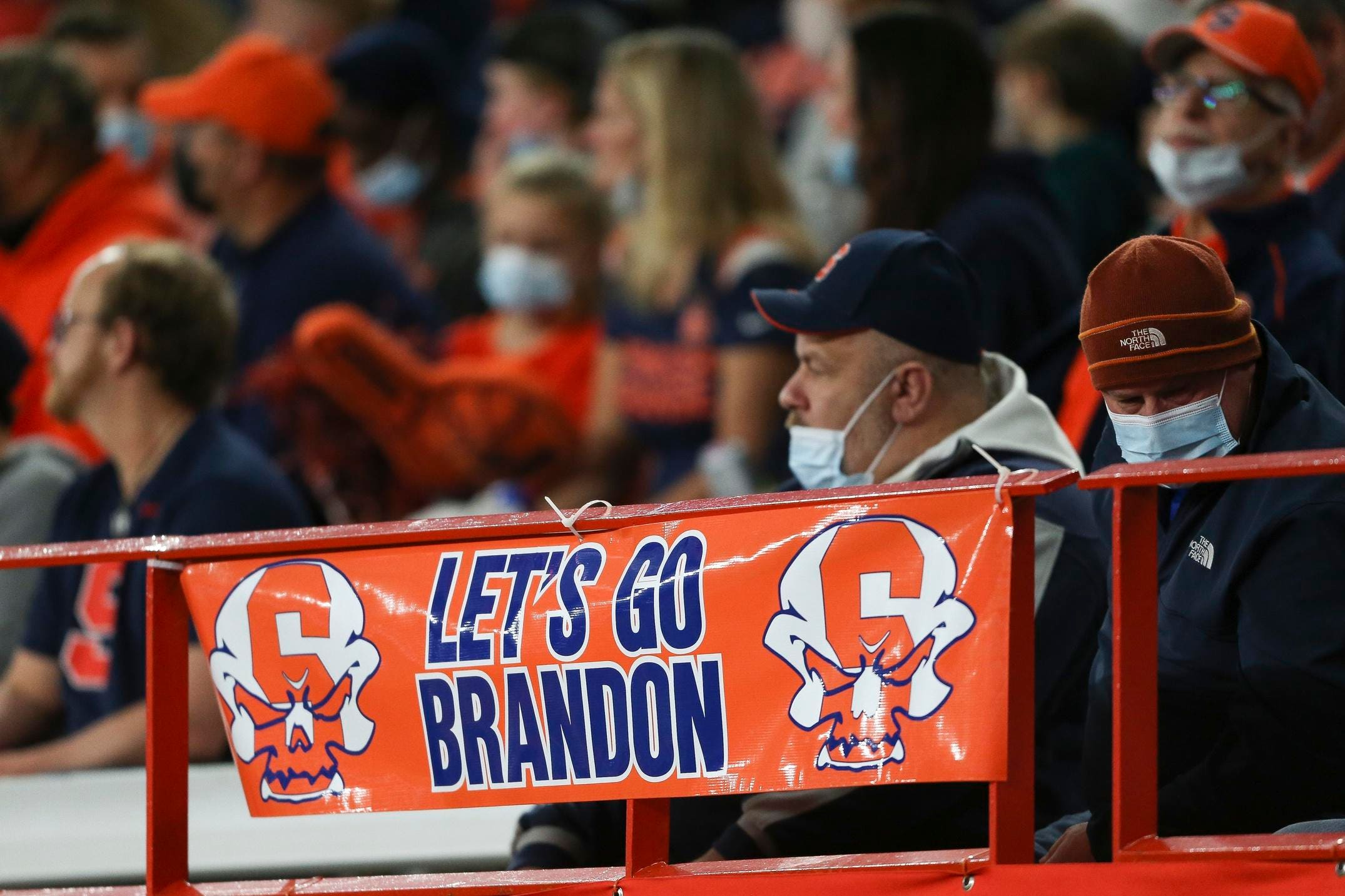 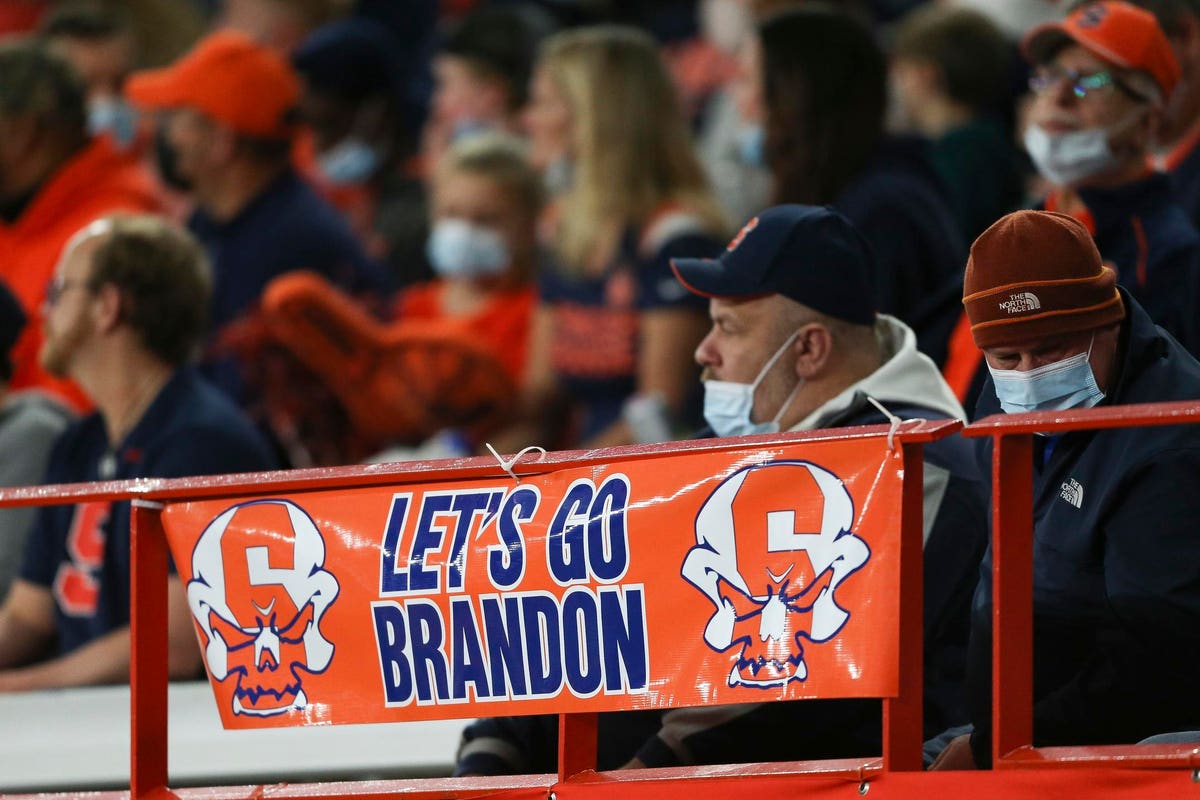 Last month, the “Let’s Go Brandon” meme/phrase took social media by storm essentially becoming a “G-rated” variant of not so civil expression “F**K Joe Biden!” The “R-rated” version had begun as a chant at sporting events including college football games in the late summer.

Not surprisingly, the crass phrase then made the rounds on social media but then evolved into the more friendly, “Let’s Go Brandon,” version following the October 2, 2021 NBC Sports broadcast of the NASCAR Xfinity Series race, which was won by driver Brandon Brown. Chants of “F**k Joe Biden” could be heard in the background as reporter Kelli Stavast reportedly incorrectly described what was said as “Let’s go, Brandon.”

Footage of that interview went viral, and the phrase “Let’s Go Brandon” became a war chant among conservatives. Yet, as the UK’s Independent newspaper reported, the phase has infiltrated mainstream popular culture,” with rappers Loza Alexander and Bryson Gray each recording respective songs with the phase as a title. Alexander’s reached the top iTunes Top Hip-Hop/Rap Songs list and reached number 38 on the Billboard Hot 100 this past week. Gray’s song also reached the top spot on iTunes, and debuted last month at number 28 on the US Hot 100.

Not everyone is thrilled by the popularity of the slogan, especially the motorsports series where it began.

On Friday, NASCAR’s President Steve Phelps said that his organization doesn’t want to be associated with politics from either side of the aisle. He has also said that NASCAR will pursue legal action against any use of its trademarks appearing with the slogan. His comments came after former baseball star Lenny Dkystra posted a photo on Twitter earlier this week of an individual wearing a “Let’s Go, Brandon” t-shirt along NASCAR’s color bars.

“It’s an unfortunate situation and I feel for Brandon, I feel for Kelli,” Phelps told The Associated Press via NBCNews on Saturday. “I think unfortunately it speaks to the state of where we are as a country. We do not want to associate ourselves with politics, the left or the right.”

As BGR.com had reported last month, the White House seemed well aware of the “Let’s Go Brandon” slogan and attempted to take over the narrative when the @POTUS account posted a meeting of President Biden with an actual individual named “Brandon.”

“I’m fighting every day to pass my Build Back Better Agenda for folks like Brandon. His story is like so many I’ve heard across the country. Folks are just looking for a fighting chance and to be treated with the dignity they deserve – and that’s what my agenda is all about,” the tweet read.

That tweet, which had some 13,000 likes, was only retweeted about 2,500 – and clearly didn’t take the Internet by storm, as may have been the plan. But did start to challenge the narrative, and over the past couple of weeks #ThankYouBrandon has begun to trend alongside #LetsGoBrandon.

On Saturday the more organic hashtag #ThanksBrandon began to go viral as supporters of President Joe Biden reacted to the passage of Biden’s bipartisan $1.2 trillion infrastructure bill on Friday.

Author Kimberley Johnson (@AuthorKimberley) was among those who started the ball rolling with the hashtag, tweeting, “#ThankYouBrandon is trending because Democratic voters are flipping the script and taking back the narrative.”

While these competing hashtags reinforce that there remains a deep divide in the country, but perhaps things have become a little more civil.

“Social media is all about these hashtags and slogans that appear over and over again,” said technology analyst Roger Entner of Recon Analytics. “This is the social part of social media. What we are seeing here is the attempt of the left to own a slogan that the right has used. We have seen this before to varying levels of success.”