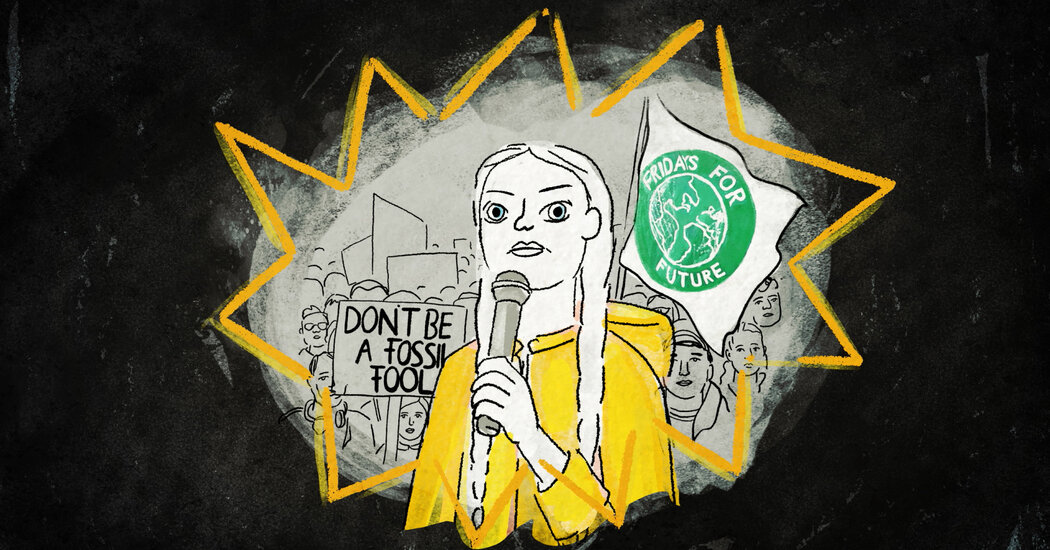 3. An additional challenge | Respond to the essential question at the top of this post: What gives you hope in the fight against climate change?

6. To learn more, read “This Is the World Being Left to Us by Adults.” a Guest Opinion Essay published in August by Greta Thunberg along with Adriana Calderón, Farzana Faruk Jhumu and Eric Njuguna, who are youth climate activists from Mexico, Bangladesh and Kenya:

Last week, some of the world’s leading climate change scientists confirmed that humans are making irreversible changes to our planet and extreme weather will only become more severe. This news is a “code red for humanity,” said the United Nations secretary general.

It is — but young people like us have been sounding this alarm for years. You just haven’t listened.

On Aug. 20, 2018, one child staged a lone protest outside the Swedish Parliament, expecting to stay for three weeks. Tomorrow we will mark three years since Greta Thunberg’s strike. Even earlier, brave young people from around the world spoke out about the climate crisis in their communities. And today, millions of children and young people have united in a movement with one voice, demanding that decision makers do the work necessary to save our planet from the unprecedented heat waves, massive floods and vast wildfires we are increasingly witnessing. Our protest will not end until the inaction does.

For children and young people, climate change is the single greatest threat to our futures. We are the ones who will have to clean up the mess you adults have made, and we are the ones who are more likely to suffer now. Children are more vulnerable than adults to the dangerous weather events, diseases and other harms caused by climate change, which is why a new analysis released Friday by UNICEF is so important.

The Children’s Climate Risk Index provides the first comprehensive view of where and how this crisis affects children. It ranks countries based on children’s exposure to climate and environmental shocks, as well as their underlying vulnerability to those shocks.

It finds that virtually every child on the planet is exposed to at least one climate or environmental hazard right now. A staggering 850 million, about a third of all the world’s children, are exposed to four or more climate or environmental hazards, including heat waves, cyclones, air pollution, flooding or water scarcity. A billion children, nearly half the children in the world, live in “extremely high risk” countries, the UNICEF researchers report.

This is the world being left to us. But there is still time to change our climate future. Around the world, our movement of young activists continues to grow.