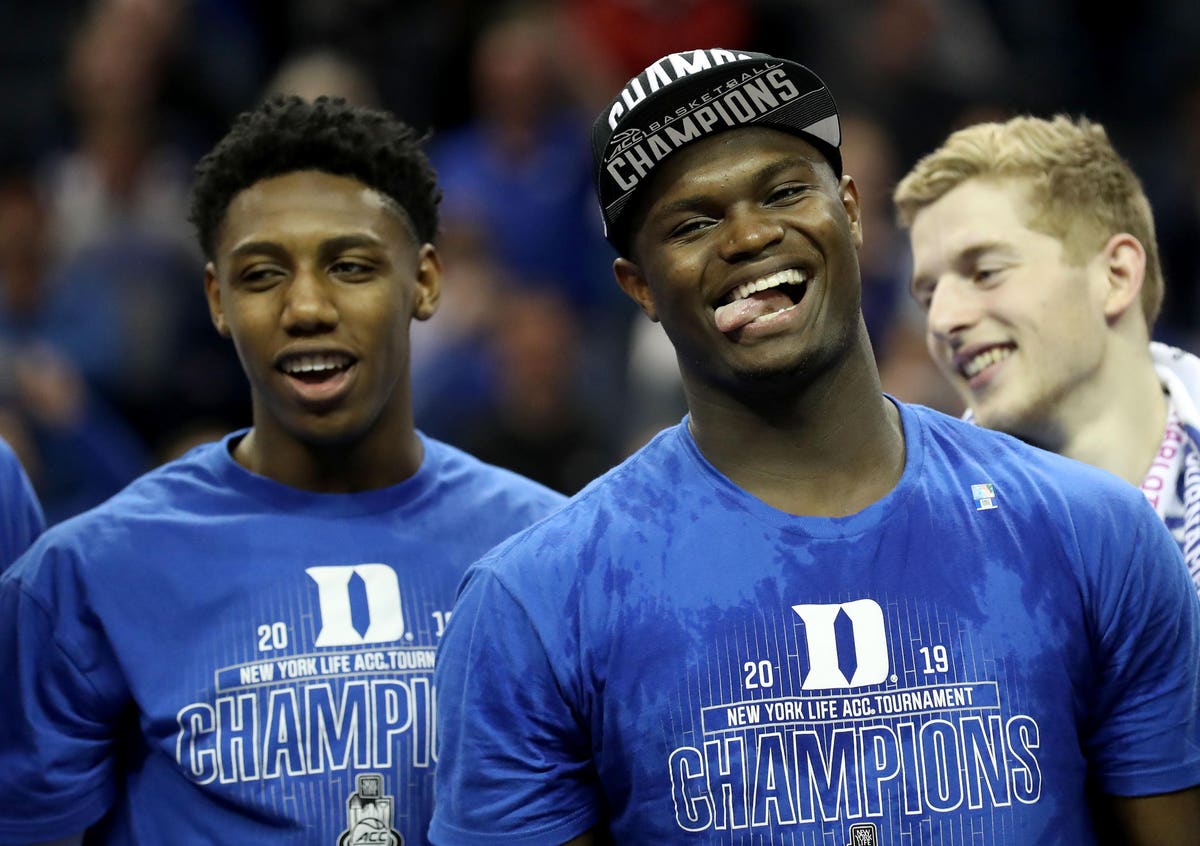 R.J. Barrett is a healthy Knick and Zion Williamson is an injured Pelican and the Knicks and their fans should be celebrating that fact right about now.

On the same night that Barrett went for a career-high 35 points with eight rebounds and six assists — with six 3-pointers — in the Knicks’ 123-117 win over the Pelicans in New Orleans, Williamson was once again seated on the bench in a mask and a yellow hoodie as he recovers from right foot surgery.

“He’s putting on a show for his former roommate [Williamson],” Knicks legend Walt “Clyde” Frazier said during the MSG telecast.

When the camera panned to Williamson, whom Bleacher Report reported got up over 300 pounds in the offseason, Frazier added, “He’s only 21 years old and already having to work on the weight problem.”

Barrett and Williamson, the two former Duke roommates and teammates, were filmed laughing before the game. They will always be friends who root for one another, and smile and joke with each other.

There was a lot of hand-wringing at the time, with observers saying that Zion was a generational talent and Barrett was a solid, if not spectacular, NBA player.

But fast forward more than two years, and Barrett is breaking out as a star for a Knicks team that owns the best record in the NBA at 5-1. He’s averaging 17.6 points and 5.7 rebounds, while Williamson has been beset by injuries as his weight has clearly been impacted.

“R.J. has great work capacity,” Knicks coach Tom Thibodeau said after his team’s latest win. “He wants to be good, it’s important to him. He’s very coachable, he’s a great teammate. And when you see how he approaches things, he has toughness, he has basketball IQ and he has competitiveness. And when you have those three things to go along with your talent, you usually improve.”

Asked if Barrett was motivated to put on a career performance because Williamson was in the house, Thibodeau laughed and said: “I love the way he approaches the game, he has a lot of pride. Whether it’s here or whether it’s in front of his Duke friends. Coach k watches a lot of his games and there’s a lot of Duke people in the league so he’ s busy guy.

Asked about his accomplishments by MSG’s Rebecca Haarlow, Barrett instead praised his teammaes.

“This team, this team,” he said. “When you have guys like Kemba [Walker] and Julius [Randle] and Evan [Fournier] out there and Mitch [Robinson] rolling, I end up wide open a lot of the time.”

Another coach who never doubted Barrett’s abilities is legendary Montverde (FL) Academy coach Kevin Boyle, who long ago said Barrett was “arguably the best player” in the 2019 Draft.

“If R.J. Barrett is available and ends up going to the Knicks, I think you could make a good case that you got arguably the best player,” Boyle told me two years ago. “Without question, you could make the argument for Zion and almost everyone does. And the issue is everybody makes it like it’s automatic. But I think R.J. has a very good argument that he was as good in college and that he’ll be as good in the pros.”

(It should be noted that Ja Morant went No. 2 in that draft and is now leading the NBA in scoring at 30.4 ppg while adding 7.8 assists and 5.4 rebounds.)

At Montverde, Barrett guided the team to a perfect 35-0 record as a senior, winning every major national Player of the Year and the GEICO High School Nationals along the way.

(Check out this 2019 interview I did on Barrett with Fox’s Tina Cervasio.

As for his character, Boyle said most players playing alongside Zion “would’ve been upset, bitched and jealous” that Williamson got “most of the attention.”

Instead, Barrett worked on his game, never got hurt and became best friends with Zion.

“He was happy for his teammate and just kept working and playing,” Boyle said. “It never affected him one way or the other, and I think that’s an incredibly mature player. And I think that’s an incredible value to any NBA team, that no matter where you fall, or however much attention you get or don’t get, that you’re going to come to work, be productive, be a good teammate and play your butt off every day. I think that tells a lot about the type of career that he’s going to have, whether he ends up being a star level player or a good player. He’s going to be the same guy and compete every day.”

And those are exactly the attributes Thibodeau praises in Barrett now.

Boyle isn’t backing down from his comments, either.

After Barrett’s latest performance Saturday, Boyle texted, “R.J. is going to be a star [because of his] mental toughness and [he’s a] great defender. He keeps getting better. He is exceptional at creating contact on his drives and freezing the defender and is now making threes off the dribble.”

As for Williamson, hopefully he gets healthy and returns to being the generational talent he was at Duke and when he’s been healthy in the NBA.

But there have always been questions about how his frame would handle his weight, and whether he would stay in shape.

“I think Coach K’s right: I think he is graceful [at 285 pounds],” one NBA scouting director told me two years ago.

“My concern is over the course of 82 games, that’s a lot of weight to lug around at that size. If you play 82 games trying to carry that much baggage, it could be a concern going forward.

“Is it a concern going forward? It has to be, and yet he carries it well now so it’s not like he can’t dominate.”

While there was so much hand-wringing and so many anguished fans when the Knicks missed out on the No. 1 pick two years ago, now it’s looking like it was a Godsend.