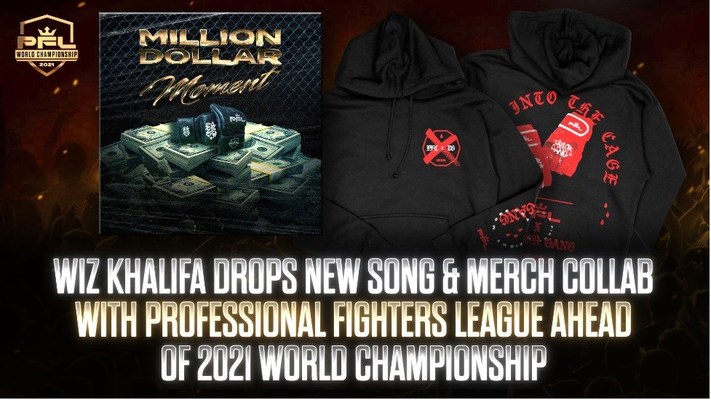 New York, NY (Top40 Charts) Multi-platinum GRAMMY & Golden Globe nominated recording artist and PFL investor Wiz Khalifa has released his new original song, “Million Dollar Moment,” for the Professional Fighters League ahead of the 2021 PFL World Championship taking place on Wednesday, October 27. The track is inspired by the ethos of PFL and its unique format, as 12 elite athletes have persevered through the Regular Season and Playoffs, and now each looks to earn a world title and $1 million prize. Listen to the song here. Khalifa will perform the track, written specifically for the event, live for the first time at the biggest night in MMA being held at the Seminole Hotel & Casino in Hollywood, FL and broadcast in primetime on ESPN networks and ESPN+.

In tandem with the new song, Wiz and PFL have also dropped the Official Taylor Gang x PFL Capsule collection which features a limited-edition t-shirt, long sleeve and hoodie giving nods to the spirit of MMA’s League and grind of Wiz Khalifa.
“I had a great time making this song with Sledgren because it allowed me to create something that will be a big part of the PFL with my MMA family,” said Khalifa. “I can’t wait to perform it at the Championship next week.”

The track and capsule are the culmination of the first year of Khalifa’s ownership stake in the league. He was appointed a music and content advisor in April and his song “We Own It’ was used as the cold open for all nine PFL Regular Season and Playoff events.
“PFL comprises of the best ownership group in sports and it’s great to see Wiz Khalifa continue to revolutionize the sport of MMA with cultural opportunities across music and fashion,” said PFL CEO, Peter Murray. “We’re thrilled that Wiz will be performing “Million Dollar Moment” live from the PFL World Championship on October 27.”

The PFL World Championship on Wednesday, October 27 will feature the remaining two fighters across all six weight classes who look to etch their name in PFL history as world champions and capture the $1 million grand prize.

The biggest night in MMA gets even more exciting with the return of two-time Olympic gold medalist, Claressa Shields, to the PFL SmartCage after a thrilling debut at PFL 4. She is set to take on upstart Mexican fighter Abigail Montes at the PFL World Championship. Former world champion Julia Budd has joined the league for the 2022 season and will make her first PFL appearance in a showcase bout on October 27.
Professional Fighters League has quickly established itself as the No. 2 MMA company in the world. With the addition of world-class talent – from elite fighters to established business executives – and partnering with industry-leading brands such as Anheuser-Busch InBev, GEICO, DraftKings, BetMGM, Upper Deck, CarParts.com and Socios, the PFL continues to accelerate its global expansion.