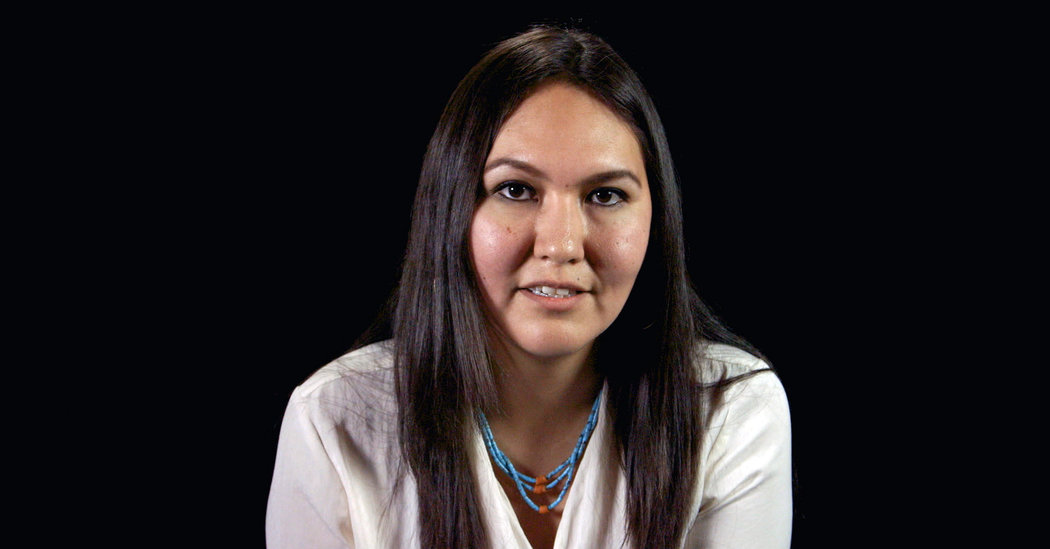 I’m Apache, but really that’s the government’s name, because they can’t say “Dził Łigai N’dee.” They will tell me how awesome they think it is that I’ve decided to be a part of my culture. And it’s funny to me. It hits me really weird, and I don’t like it. And I didn’t know why at first, but it’s because I haven’t decided to be a part of my culture. I live it every day. I’m more comfortable with the term “native,” divorced from “Native American.” I know there are people who use “indigenous.” If there is one term I do not like to be called, it is “American Indian.” And for me, to be indigenous is to have an intimate and interconnected relationship to a homeland. And so that’s really important, because land is, you know, tied to every aspect of who we are. Being native in a city is almost a daily reminder of your people’s erasure. Of the fact that people don’t even remember that you’re here and that you exist. But what I did encounter was just this preconceived notion that all Native Americans are dead. I’ve had older white men come up to me and say, “Oh, man, if this was 40 years ago, I could just do whatever I wanted to you.” You know, the cattle outside doing the work and the dog inside the house, those are property. Those are the black folks in America. They are property to white men. Then the exotic antelope on the wall or the exotic — that’s how natives are perceived in America. We’re treated like animals. They monitor our blood quantum. I mean, besides dogs and horses, I don’t know of any other animal that they monitor the blood quantum. The way I explain it to people is, imagine a pizza with different slices, and let’s say 32 slices. Of the 32 slices, I’m 28 Apache. That’s my particular blood quantum. And Native Americans in the U.S. are the only minority group who have to prove their nativeness on an Indian card. It’s used to divide native people against each other, because it can be used as a way to say, I am more native than you. And I was a part of that, too. I used my 4 fourths to kind of make myself feel better against other people. The one drop rule, meaning that one drop of black blood makes you black, that was to keep as many people oppressed or legitimize their oppression as possible. But on the other side, one drop of anything else completely dilutes you as a native person. So if you’re a native person, you have the one drop of something else, then suddenly you’re less native. So it’s the opposite. Traditionally, within the Apache society, you go by the mother. And if the mother is recognized as Apache, she has her clan, the children are unquestionably Apache. Not in the American context, not when patriarchy trumps matriarchy. So what does that mean? My sisters are short 1/16 of a degree. What does that mean? Does it mean their pinkies aren’t Apache? What does that mean? You know, being a mixed race person is a whole other side of it, but that’s a very common experience in our tribe. So it’s not as if we’re unusual in that way. What is unusual is the admixture of black. My grandfather actually doesn’t want people — if he hears that somebody from the tribe is coming over, he won’t come out of his room. Because he doesn’t want them to know that he’s that complexion, that he doesn’t — I guess he doesn’t want me to be affiliated with having African-American blood. But I mean, I say it. It’s not going to change anything. If it were up to the American government, natives wouldn’t be around. Because after a certain time, that blood will dilute. It will go out. And so if there’s no native peoples to provide benefits, then we’re not obligated to meet these treaty rights. And if we’re not obligated to meet these treaty contracts, then the land is available, the resources are available. And I think that that essential point about our claim to sovereignty, our claim to land, our claim to a culture, our claim to resources is one that gets lost if we don’t insist upon the fact that we are nations. And we have taken huge steps to decolonizing, and that proof comes from people being able to have the opportunities to speak their language, to be on their ancestral land. But the thing with decolonization is that it’s an ongoing process, just like grieving, just like any loss. As much as possible now, I try to tell people that I have a Native American name, and maybe it doesn’t mean anything to you, but it means everything to me. My name, maybe, doesn’t have a romanticized, Hollywood Indian name, but my name has more meaning than that. My name means that my family survived. My family survived disease. My family survived Catholicism. My family survived settler colonialism, and my family, they survived. I survived. My existence is resistance. Me saying my name is Skiumtalx, that is resistance in and of itself.