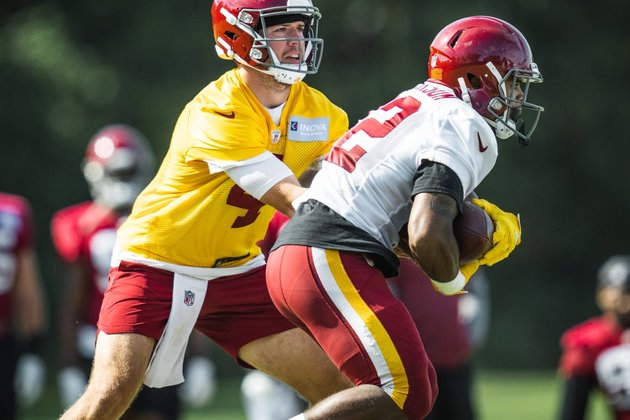 The Washington Football Team will take on Patrick Mahomes and the Kansas City Chiefs for a Week 6 battle. Here are some of the top quotes from the week, presented by GEICO.

“Just an absolute force on the field. Great, great player. That’s my memory of him. That’s great that they’re doing that. It’s awesome. I drive into the game every day on Sean Taylor Road. So I think it’s very appropriate.”

“I think Ricky did a nice job. He had a couple of plays that he’d like to do better. 82 plays and five or three of them didn’t count because the penalties is a lot. That’s more than we normally get on offense. He was pretty wiped out afterwards. I know he gave it his all and I was always happy with the way that he performed.”

“I don’t know if you can pick up anything from him. He’s one of those, I’m going to say a wildcard. He’s just an unbelievable athlete/quarterback. I kind of go back to when I was training kids when I wasn’t playing and they’re trying to do Mahomes-type stuff. I’m like, listen, you’re not Mahomes. That’s something that he can do. We can’t. I do like watching him play it’s, it’s really fun to watch. I don’t try and pick up any type of stuff from his game. Because that would probably get me in trouble.”

Ron Rivera on how much growth he has seen from his team so far this year:

“I think we’re growing and that’s what you want. You want this to be an opportunity for us to develop and grow and at the same time continue to work to win. I mean, we want to win football games and we have some growing to do, but that should not get in the way of us winning football games, if we play to our abilities. I really believe if we play our abilities, we give ourselves a chance to win.”

“He just professional. He doesn’t get the most reps in practice, but he’s paying attention to meetings. He’s paying attention at practice, and he knows what to do in certain situations, certain coverages. We all have a lot of confidence in him. Like when you see him in the huddle, he’s got those confident eyes. He’s ready to go and you know he’s going to do the right thing. He’s a playmaker out there. We’re really excited when he’s in the huddle and he makes a big play.”

“He was a legend. He made you want to play for Washington. I wish he was still here, man.”

“I can remember the day heading to school, hearing the tragic news of him passing away and me crying. That’s how much of an impact Sean Taylor had on me, the whole organization and the DMV area. I think [retiring his number] is big. He was one-of-a-kind.”

“To talk about both those guys, both those guys were starters for us last year and did a nice job. When they go in and play, the comfort level with them is great. I feel really good about them, so I thought they stepped in and we didn’t necessarily miss a beat. I think we gave up two sacks and we had to hold the ball on really both of them – one of them, for sure. I think that’s kind of what had happened there. But for the most part, I felt good about those guys coming in and filling in for our starters.”

“Just continuing to gain confidence and play fast, you know, that’s what we’re looking for. He’s a great young man. He cares a great deal. Probably cares a little too much. I’d like him just to say the heck with it. I’m going to make a play, you know? Very conscientious. He’s working hard. I look forward to him turning the corner as well. I think we will. I think he’ll make an impact as we go through the season. And I think our defense will become impactful as we finished the season.”

“Well, I think the biggest thing more so than anything else is he gave me my first opportunity as a positional coach. Then he helped train me, put me on the road to where I am today. A lot of it is basically understanding his way of doing things. It’s embedded in the West Coast way of doing things. Because of that, I learned a lot of the things that I do today, I try to mimic him to a degree and that’s why he means so much to a lot of us.”