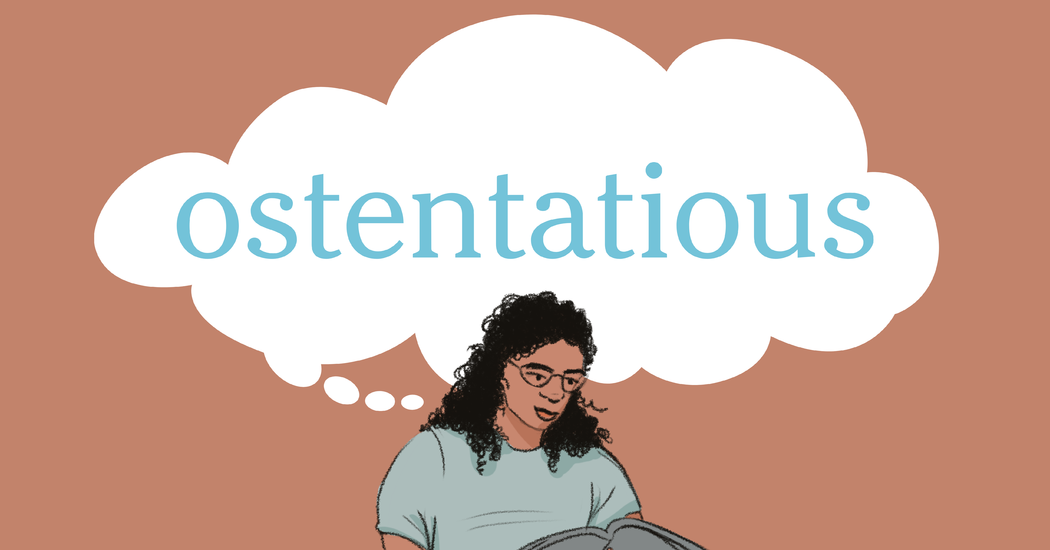 1. intended to attract notice and impress others

2. (of a display) tawdry or vulgar

The word ostentatious has appeared in 47 articles on NYTimes.com in the past year, including on Sept. 30 in “Rappers Come Shop for Jewelry. Icebox Turns the Cameras On. by Jon Caramanica:

The display cases at the Atlanta jewelry store Icebox teem with Cuban link chains, watches called bustdowns covered edge to edge in diamonds, gold pendants in dozens of designs. It is the ne plus ultra of contemporary hip-hop luxury. And over the last three years, Icebox has built a secondary business atop this phenomenon, starting a YouTube channel filled with videos of rappers coming in to salivate and shop.

But often, the most striking characteristics of these lavish 10-minute videos aren’t the ostentatious pieces of jewelry, or even the artists themselves. The clips are among the most soothing places on the hip-hop internet, conveying a powerful sense of calm, of relaxation. They capture the safe spaces of the rich and otherwise flamboyant — watching Icebox videos is like being let in on a secret. More than a million people subscribe to the store’s YouTube channel.

Can you correctly use the word ostentatious in a sentence?

If you want a better idea of how ostentatious can be used in a sentence, read these usage examples on Vocabulary.com.

Achieving Buy-In: How To Make A Successful Business Case For Your Virtual Training Program