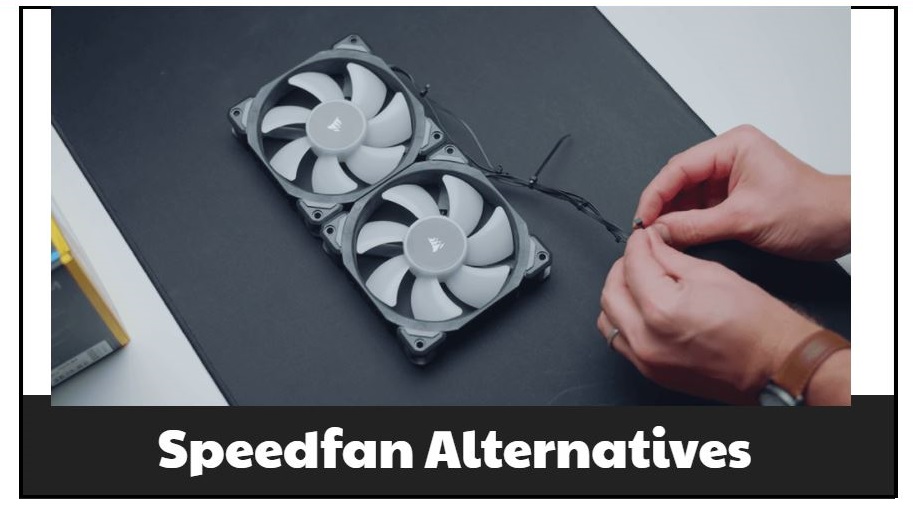 While laptops can be a great way to get work done while on the go, they are not the most powerful option because of their compact size. This becomes an even bigger issue if the small size of your given laptop causes heating issues. In fact, these heating issues are also present in desktops if their fan speeds are not adjusted properly.

While all laptops have cooling fans inside, they will not be useful if the fans are not running at optimal speeds. Even though you can use programs to adjust the fan speed manually, not all computers may support a program like Speedfan which is considered as one of the best for changing fan speeds for both laptops and desktops. If you are also facing compatibility issues with Speedfan, then make sure to check out the Speedfan alternatives given down below.

Speedfan is one of the best programs for manually adjusting the speed of your computer fans to any speed that you like. Unfortunately, since it does not work with every PC, you might be looking for other similar options. But because adjusting fan speeds in a PC is quite handy, there are a lot of Speedfan alternatives out there due to which choosing the right one can be a bit difficult.

Hence, all the best Speedfan alternatives given down below have all their important features and details properly explained so that you can go through these options one by one and pick the best one for you:

Even though HWiNFO is a tool designed to check the specifications and current status of the different hardware devices of your desktop or laptop, it also offers a few customisation and preferences options. This also includes their fan control that allows you to change the fan speeds while monitoring your computer at the same time.

Argus monitor is a great way to check the temperature and current clock speeds of all your PC components like CPU, GPU, RAM, and others. And based on these temperatures, you can adjust the fan speed of your computer as needed. Plus it even offers a S.M.A.R.T function to automatically adjust fan speeds for the best performance.

AIDA64 is one of the most popular programs out there when you are talking about stress testing a laptop or desktop and taking it to its limits to get an idea of its maximum temperatures as well as performance numbers. You can then use these temperature readings to get an idea of the optimal fan speeds that you may need to use.

Since some of you would want to monitor the temperature of a given PC over a long period of time, Real Temp allows you to do just that with its real-time readings. In fact, you can even take a log of these readings over a long time to ensure that your computer temperatures are under control after adjusting the fan speeds.

While most fan speed programs only offer the temperature readings of the complete CPU or the GPU package, Core Temp allows you to check the temperature of each core. Since it also offers power readings, choosing an ideal fan speed should be fairly easy.

Just per the name, Intel Desktop Control Center is primarily made for Intel CPUs. While it does not work with laptops, you can easily adjust the CPU cooler fan speed of your Intel processor with this program as it offers excellent compatibility with all Intel motherboards.

Those of you who have a Mac-based system can go with SSD Fan Control since it is made just for MacOS and not Windows. Since Macbooks are known for having high fan noise due to their ultra-slim design, this program can be a great way to fix the same.

As you can most likely tell by its name, Sidebar Diagnostics allows you to diagnose your computer and its various components via a handy sidebar. In fact, you can also change the fan speeds of your PC on the fly with the help of this sidebar which is easily accessible.

Whether you are using a Windows computer or a Linux based system, Open Hardware Monitor works great on both. It offers highly detailed information about your computer temperature along with a temperature graph so that you can adjust fan speeds keeping these readings in mind.

Since almost all components of your PC have various sensors for checking their temperature, Lm-Sensors allows you to access all these sensors. Not only does it allow you to check the temperature as well as fan speeds, but you can even modify fan speeds as required.

While most desktop motherboards come with their own fan control programs, most laptops lack one which can be quite an issue since other programs might not be compatible with laptops. Thankfully, NoteBook FanControl overcomes exactly this issue since it is primarily made for laptops and notebooks while offering pretty great compatibility to the user.

Those of you who are new to computers and do not want to play around with complex programs for changing fan speeds can go with Thinkfan. It offers an easy-to-use user interface along with various automation options for easily getting optimum temperature for both laptops and desktops.

Easytune is much more than just a fan control software since you can use it to improve the performance of your computer as well. This is done by optimizing and adjusting the clock speeds of both your CPU and GPU for reducing temperatures while improving the overall performance.

You can easily check the temperature of your PC’s CPU as well as all of its cores using a CPU thermometer. Checking these temperature readings is highly important if you want to be assured that you are using optimum fan speeds with your computer.

Speccy is one of the most popular programs out there when it comes to quickly and easily checking the specifications of your PC. Other than giving hardware information, it also offers temperature info along with tools for adjusting fan speeds in your computer.

TG Pro or Temperature Gauge Pro is primarily a program made to monitor the temperature of your system with various details and a complete graph for properly monitoring temperature. Not only does it allow you to control fan speeds, but it also gives warnings if the current system temperatures are too high so that you can increase fan speeds right away.

iStat Menus is another Speedfan alternative designed primarily for MacOS based systems. It offers great compatibility with both desktop Macs as well as Macbook laptops. And if you have a Macbook with high fan noise, then you can go with this program to keep all such fan noise under control.

HWMonitor has been around quite for some time since it proves to be a great option to quickly and easily check all details regarding your computer including the temperatures. And depending on the laptop or desktop that you are using, it can also be used to change the fan speeds in some cases which is always great to have.

Whether you are using your laptop or desktop for gaming or any other heavy-duty computer workload, it can get quite hot during the same. To prevent overheating and get optimum performance out of your computer, it is highly important to manually change the fan speeds to high speeds.