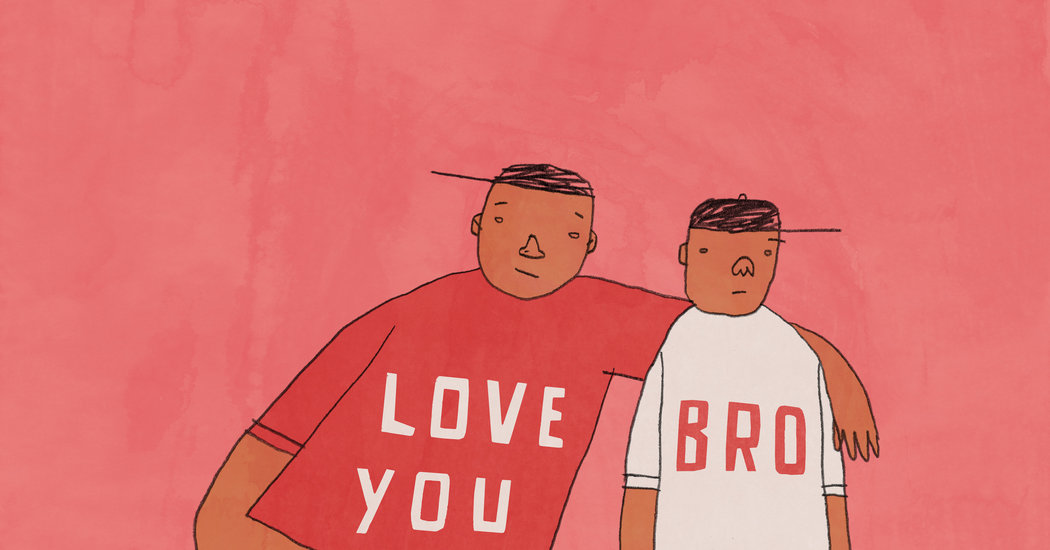 My first message to him was an apology, sent the next morning. He was kind and forgiving. We agreed to hang out.

A friend of mine (who’s smarter and a better writer than me) once pointed out that, in this essay, there are a lot of classic romantic narrative gestures, but they work here (and aren’t cliché) because I’m talking about two male friends. This is Kichi and my meet cute! I tried to riff off the love story narrative arc a little to speak to the theme of the Modern Love column.

Freshman year is an easy time to attach to people. I started hanging out with Kichi more and more, almost every day, then several times a day. When it was time to choose housing for sophomore year, we decided to room together. We fell into each other’s lives quickly because we were both hungry for closeness in a new place. We stayed in each other’s lives because nothing has ever felt more natural.

Kichi and I are both mixed race, with white mothers, immigrant fathers and hard-to-pronounce names. We are from cities — him Seattle, me Philadelphia — that we take pride in. But mostly, we are different. He’s calm, cool, rides a skateboard, keeps his clothes neatly folded, writes poems and loves immunology. When he’s sad, he doesn’t stay sad for long.

I admire how quietly deliberate Kichi is and the balance he brings to his life. When I go to him with girlfriend problems, writing problems or any other kinds of problems, some little thing he says or notices always stays with me for days. I appreciate his steadiness, and he appreciates how emotional I am, how I’m rarely balanced or collected at all. How I’m messy and clumsy.

One really underappreciated aspect of writing, especially in prose, is rhythm. Think about the most entertaining people you know; it is likely the cadence and pace of their speech that makes listening to them riveting, perhaps more so than what they actually have to say.

Again, there is no formula to writing rhythmically, but I will say that when you read your work out loud, you get to hear its natural rhythms and sonic arcs, and you can tell where the rhythm gets stuck and needs smoothing out. I always read my writing aloud. If something feels awkward or clunky to say, I change it (sometimes my spoken voice even edits my writing for me, changing words or phrases by accident as it’s reading — those edits I never question).

Reading this paragraph now, almost three years after writing it, makes me want to change my name or give up writing forever. “What else is there to love, anyway?” SMH, younger Ricardo, that is so corny!

I wonder, though, if a disapproval of our younger writing selves is not only inevitable, but something worthy of aspiration. I want to be editing myself, constantly, as a writer and person. So, maybe, if we feel squeamish about our old writing, it means we are doing something right; we are participating in the world and letting it make new what we understand in ourselves to be beautiful and true.

The codes men follow in love are tricky. For example, while saying a straight “I love you” is frowned upon, sometimes saying to another man “Much love” or “I got love for you” is O.K. “I love you” might even be passable if it is quickly followed by “bro” or “man.”

These are the linguistic gymnastics masculinity asks us to perform, the negotiations we make through language to keep within the acceptable bounds of manhood.

I came up with the phrase “linguistic gymnastics” really early on in the writing of this piece. I don’t outline my writing. I usually just start with some lines and phrases, like this one, collected on a page in my journal. I never think about what an essay is “about” before, or even as, I’m writing it; I let it, over time, inform me of the many things it’s about.

You might start with a phrase or line or sentence that you love but don’t completely understand, and then go from there, scratching the surface, attending to the mystery of what you just wrote, understanding, in time, both its meaning and its place within a larger cohesive whole. Because the best things we write never feel like they really come from us; they feel like mysteries, as though they came through us, from some other distant place. The writer Adrienne Rich said once that “poems are like dreams: in them you put what you don’t know you know.”

Another way to think about it is this: I begin with phrases and ideas I love, and then build the scaffolding to hold those phrases up, and the bridges to connect them. Little by little, all those pieces begin to collect around one shared nucleus — one story, one question, one gesture.

A footnote should be added to the code. Sometimes the most inconvenient or terrible circumstances can occasion an acceptable expression of love, but only at that moment, never to be spoken of again.

Two years ago, Kichi and I took semesters off from college and spent that time in Colombia, where my father is from. One day, while in the coastal town of Capurganá, I got so suddenly sick with fever and dizziness that I dropped to my knees while walking on the beach.

I was scared to be mysteriously ill in a place where I knew it could be hard to find help. Kichi searched all over town for a doctor. When he couldn’t find one, he decided his pre-med coursework would have to do, and he tended to me. He put his hand on my forehead. He whispered into my ear. He told me over and over that I was going to be O.K. — until I was.

This was perhaps our most intimate moment, brought about by my sickness and unthinkable at any other time.

Here is another place where you can see scenes and ideas at work. There’s a popular piece of writing advice that says “show, don’t tell,” meaning, essentially, that depiction is always stronger than declaration. It’s a dictum that I mostly — but don’t entirely — agree with. Perhaps this is because the sentences in my reading life that I tend to treasure, that I inevitably memorize and quote in letters or transcribe in the margins of other books, are often those beautiful declarative, idea-y sentences.

Maybe an alternative way to think about it is to “show and tell,” like a show and tell in school! Let people hold the old photograph of your grandmother in their hands, but as they hold it, tell them what it means to you. Here, I’m in another “show” moment — this scene of Kichi and I at the beach — but I’m gearing up for an important “tell” moment.

This is the code, as intricate as it is far-reaching. Kichi and I do not possess the flagship qualities of masculine college boys. We aren’t in fraternities or on sports teams. We have even talked, more than once, about masculinity and the illogical things it requires of us. But still, we have lived in this world. We grew up as boys in America. We learned this code and we practice it. There’s no immunity.