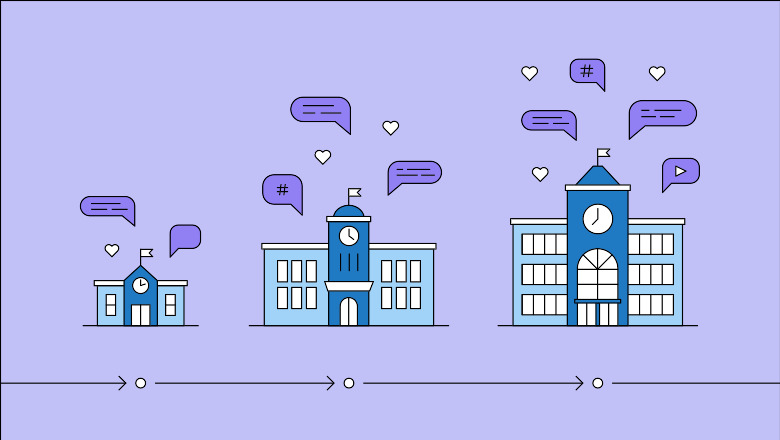 Pursuing higher education is one of the biggest investment decisions we make. But a degree is so much more than a product—it’s a personal choice that shapes peoples’ lives. This has forced educational institutions to rethink how they use social media, especially since the start of the pandemic.

How are universities and colleges using social media in the wake of remote learning and school closures? We spoke to three institutions across Europe and the UK to find out what the new social media landscape looks like for them.

How universities and colleges use social media

It can be difficult for students to get a feel for a place before they enroll, but social media offers insight into the personality behind an institution. For ESCP, a business school with six campuses across Europe, social media is a place for raising awareness of their brand and securing trust with future and existing students.

“We are essentially working on visibility and brand trust to help our audience understand what ESCP really is. We’re not just a business school, we have our own values about sustainability, and about inclusion and many other things,” says Tom Maccario, Head of Digital Communication and Social Media at ESCP.

“When it comes to social media, first it’s visibility and impressions, then engagement. We want our messages and posts to be delivered to the maximum number of people, but we’re not looking to touch everyone. We want to touch the right people and have a conversation with them.”

Attracting potential students is an important goal for many institutions, but it goes further than that. The University of Cambridge taps social media to reach researchers and potential staff too.

“We use it to attract the best people in the world, whether that’s potential staff, researchers, undergraduate students or postgraduate students,” says Anu Hautalampi, Head of Social and AV at the University of Cambridge. “We also use it to keep in touch with alumni, partners and donors, to protect and convey the Cambridge brand, and to broaden the perception people have of Cambridge.”

The institution itself is renowned as one of the oldest universities in the UK, but through social media, they hope to portray its focus on cutting-edge science as well as its increasingly diverse community.

Reputation is everything for universities and colleges. The competition is fierce, so even a minor crisis can have a damaging effect. “My role is to look after the university’s brand and reputation on social media,” says Hannah Keep, Head of Social Media at Cranfield University. “It encompasses content reporting, crisis management, student recruitment, and customer service as well.”

The university implements the 80/20 strategy, where 80% of its social media effort is spent creating content and building the university’s online personality, while the remaining 20% is spent on direct selling and trying to convert new students.

The changing role of higher education social media during the pandemic

COVID-19 impacted every single industry, but universities faced a unique situation since their students and staff are based all over the world.

“When we passed the global shock of the pandemic, we understood quickly that the education system would change drastically (and we had to communicate this),” says Maccario.

There’s no denying that higher education social media usage has undergone a massive shift over the past two years. It’s gone from being primarily a form of advertisement to a multipurpose tool, including a central customer service hub and internal communications channel.

The pandemic was a lonely time for a lot of people, particularly students who might not have been with their families or even in their home countries. ESCP understood that people were keen to feel close to others, even virtually.

“When it comes to social media, we understood that many people wanted to share their stories about the pandemic and remote learning. We had many, many testimonials, and a series of videos on Instagram called ESCP at Home that works really well. We also ran a contest for students, where we asked them to share their learning habits as well as their new lifestyle habits,” says Maccario.

Universities have identified social media as a community-driven forum that is to be used by everyone, not just the marketing team. Throughout the pandemic, they have encouraged students, staff and faculty to share their own relatable stories. Cranfield University was particularly driven by this idea of community. They specifically used social media to direct people to support services, since they found a lot of students were reaching out via their social channels rather than email and other traditional methods.

Hi, it was only running for the day on July 30. We will keep you updated if the NHS decide to run another walk-in clinic on campus 😀

Embracing an informal approach to communication

Universities and colleges are often deemed formal landmarks, and their social media channels reflect this. During the pandemic, things changed as institutions began to realise that students craved human connection.

Cranfield University identified this need and switched up its approach to social media, taking on a more informal tone. “Rather than emailing and waiting for a response, people were recognising that we were friendly on social media and approached us there. We always use our names so people know they’re talking to a real person,” says Keep.

The pandemic created room for institutions to experiment. Take Cambridge University, which launched a TikTok account to get in front of prospective undergraduates.

“I wanted to get Cambridge on TikTok for a while because there was an age group we weren’t reaching,” says Hautalampi. “Coming up with TikTok content during lockdown was challenging of course, because we couldn’t go anywhere or see anyone. But this just meant we had to repurpose existing assets—and it actually allowed us to get really experimental.”

Gaining a deeper understanding of their audience

Student priorities have changed over the past 18 months. Safety and human connections have become paramount, and universities and colleges are realising that to succeed on social media, they need to put their audience first.

“We understood that during the pandemic, there were many things we could post about, but a lot of it wasn’t relevant for the audience. Now we really want to focus on our audience relevancy and promote content that’s important to them,” says Maccario.

The goals of social media have shifted for institutions too. “When I first started at Cambridge, we were very focused on shares,” says Hautalampi. “We are now focusing a little bit more on reactions and we’ve started publishing content that’s more community-oriented.”

The pandemic raised a lot of opinions from students who expected their institutions to take action. It was a difficult time for social media managers who were trying to adhere to UK government guidelines, while communicating with students who had families in the worst affected countries at the time. Universities suddenly realised that social media was an instant barometer of what their students were saying, thinking, needing and expecting.

“When we were talking about what the Vice Chancellor might say in his video messages to students, I was able to show him what people were thinking and feeling. There was a time right at the beginning of the pandemic where social was really high up on the agenda,” says Keep.

Many companies—including those in the education sector—are discovering that social media can be used for much more than brand awareness. Social is a home for conversations with their audience, product feedback, competitive and market insights, and (most importantly during the pandemic) for customer service.

“Up until the pandemic, a lot of organisations had the luxury of never really being challenged on social media,” says Keep. But social channels quickly became an always-on way for students to get their inquiries, which meant institutions had to respond quickly if they wanted to provide stellar student support.

More than ever before, social media is a critical extension of institutions’ traditional support channels. “We are hoping to create a real community. We’re getting more and more messages on Facebook and Instagram asking questions like when it will be possible to join the next intake, or whether someone should study in Berlin or Madrid. Sometimes the answers aren’t always on the website, so the students ask us on social media,” says Maccario.

The fast-paced nature of social media meant it quickly became a way for institutions to communicate internally with existing staff and students.

“We set up a Facebook group for staff,” says Keep. “It was at the point where suddenly everyone was going to be geographically dispersed. We debated creating one for years, and the pandemic gave us a reason to finally do so. It was so simple and easy for people to use, and it was a way of keeping the community together.”

Using social media as an internal communications tool was also a priority for Cambridge University during the pandemic.

“We started using social media to reach our internal community, who weren’t really a target audience beforehand,” says Hautalampi. “Because people went back home and weren’t physically in Cambridge, it was important for us to have a direct, real-time way to speak to our students and staff.”

Social media as the backbone of communication

“COVID brought into sharp focus the potential of social media channels, and the importance of having the right people managing them,” says Keep.

Social media has been the backbone of communication for many institutions during the pandemic. Colleges and universities quickly realised that Twitter, Instagram, Facebook and LinkedIn were not just places to advertise their courses, but also key platforms for getting to know their audience, collecting market insights, and carrying out stellar customer service. Social went from being a place to reach new prospects and push out marketing messages to a central community hub, both for students and staff.

Universities view engaging with their students and staff as more than simple customer service, and social media lets them create a vibrant community that adds heart—during both exciting and difficult times.

Hoping to transform your institution’s approach to social media? Download our higher education playbook for actionable advice on everything from goal setting to reporting and community management.