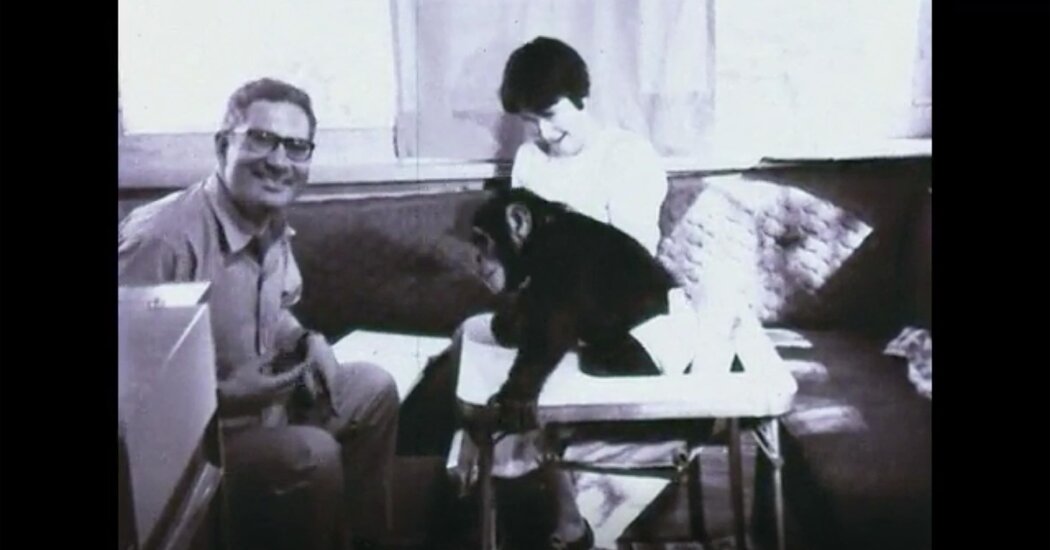 Washoe was 10 months old when her foster parents began teaching her to talk, and five months later they were already trumpeting her success. Not only had she learned words; she could also string them together, creating expressions like “water birds” when she saw a pair of swans and “open flower” to gain admittance to a garden.

Washoe was a chimpanzee.

She had been born in West Africa, probably orphaned when her mother was killed, sold to a dealer, flown to the United States for use of testing by the Air Force and adopted by R. Allen Gardner and his wife, Beatrix. She was raised as if she were a human child. She craved oatmeal with onions and pumpkin pudding.

“The object of our research was to learn how much chimps are like humans,” Professor Gardner told Nevada Today, a University of Nevada publication, in 2007. “To measure this accurately, chimps would be needed to be raised as human children, and to do that, we needed to share a common language.”

Washoe ultimately learned some 200 words, becoming what researchers said was the first nonhuman to communicate using sign language developed for the deaf.

Professor Gardner, an ethologist who, with his wife, raised the chimpanzee for nearly five years, died on Aug. 20 at his ranch near Reno, Nev. He was 91.

His death was announced by the University of Nevada, Reno, where he had joined the faculty in 1963 and conducted his research until he retired in 2010.

When scientific journals reported in 1967 that Washoe (pronounced WA-sho), named after a county in Nevada, had learned to recognize and use multiple gestures and expressions in sign language, the news electrified the world of psychologists and ethologists who study animal behavior.

The Gardners, who were childless, raised then young ape on their ranch in her early years.

Her ability to form simple phrases — like gesturing “Me, Washoe” when she looked in a mirror — was a linguistic feat that Roger Brown, a Harvard psychologist, told The New York Times was akin to “getting an S.O.S. from outer space.”

“Absolutely frontier-breaking work,” Duane M. Rumbaugh, a scientist emeritus at the Great Ape Trust of Iowa, said in retrospect in 2007.

The Gardners’ findings challenged the premise that humans are uniquely equipped to express themselves through language. Their research also expanded educators’ understanding of the ways children learn language, and of how to apply that knowledge to people with learning disabilities.

Evidence of the Gardners’ early communication with Washoe was greeted skeptically by some researchers.

Herbert S. Terrace, a Columbia University cognitive psychologist, said at the time — and repeated in a recent email — that only humans can speak spontaneously and use grammar, two mainstays of language.

He said his own analysis had found that “most of the chimpanzee’s signs were artifacts of unconscious cuing by their teachers” and not spontaneous.

Nonetheless, the Gardners were able to replicate their research with four additional infant chimpanzees.

And subsequent studies by the couple and by other researchers — using various methods of communication, like identifying objects through symbols and pressing buttons instead of signing — demonstrated that while chimps and bonobos lacked sufficient physical control over their tongues, lips and larynx to speak vocally like humans, they were capable of understanding the concept of a word and of learning language, and could chat by using hand signals.

Robert Allen Goldberg, known as Allen, was born on Feb. 21, 1930, in Brooklyn. (It is unclear when his surname was changed.) His father was Milton George Goldberg, an industrial engineer and onetime bootlegger. His mother was May (Klein) Goldberg. His younger brother, Herb Gardner, would achieve fame as a playwright.

His parents took Allen with them as they drove around delivering illegal liquor, on the assumption that the police would not suspect a couple with a baby.

He earned a bachelor’s degree from New York University in 1950, a master’s from Columbia in 1951 and a doctorate in 1954 from Northwestern University, where he studied learning theory under the educational psychologist Benton J. Underwood.

He served in the Army as a research psychologist and taught at Wellesley College in Massachusetts, where, at a lecture on love by the psychologist Harry Harlow, he met a fellow teacher, Beatrix (sometimes spelled Beatrice) Tugendhut, known as Trixie.

They married in 1961 and moved to the University of Nevada, where she, a psychologist and zoologist herself, became his research collaborator. She died in 1995.

Professor Gardner co-founded the Center for Advanced Studies at the University of Nevada in 1984 and was its director from 1990 to 1993.

In 1965, he encouraged a psychology student, Roger Fouts, to begin demonstrating, as his doctoral thesis, that Washoe’s capacity to communicate approached the level of young human children.

But the Gardners concluded that the only way to correlate the ape’s developmental skills with those of children would be to create a comparable environment, and to treat their simian subjects as if they were foster children.

The Gardners published their initial results in the journal Science in 1967 and presented them to the American Association for the Advancement of Science in New York.

In 1974, Washoe was featured on the PBS science series “Nova.” In 1989, the Gardners published the book “Teaching Sign Language to Chimpanzees.” In 1998, three years after his wife died, Professor Gardner published another collaboration, “The Structure of Learning: From Sign Stimuli to Sign Language.”

Washoe lived with the Gardners until she was about 5 years old, then moved to the Chimpanzee and Human Communications Institute of Central Washington University in Ellensburg, Wash. She died in 2007 at 42.