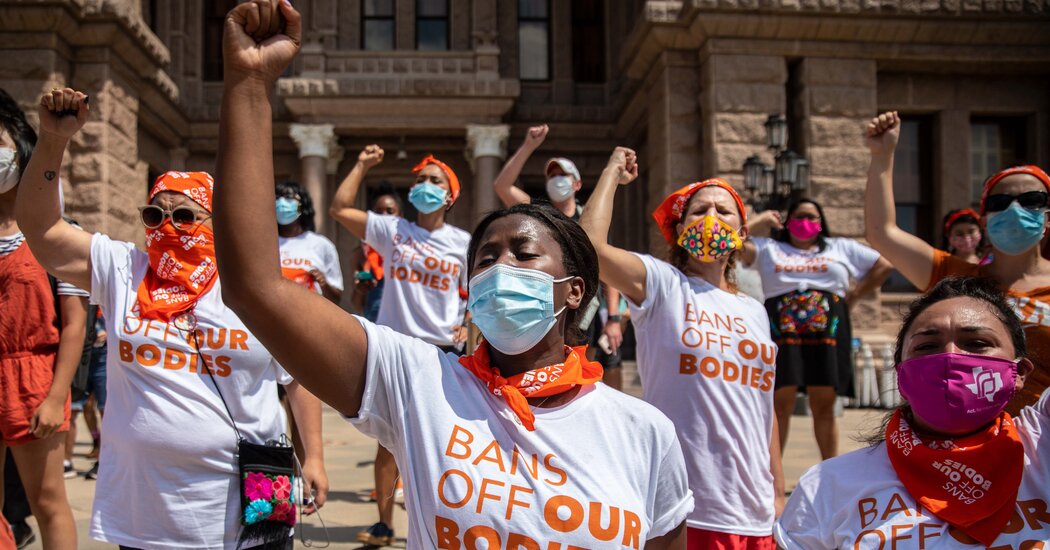 In “Abortion Is No Longer a Crime in Mexico. But Most Women Still Can’t Get One.,” Natalie Kitroeff and Oscar Lopez write about the decision in Mexico. This article is also available in Spanish.

When the Supreme Court in Mexico issued a historic decision on Tuesday declaring that having an abortion was not a crime, activists across the country celebrated. On Wednesday, they got back to work, taking on the long and arduous process of ensuring that the legal shift applies across Mexico.

Among their top priorities are helping the women who need it most: those facing criminal penalties, often after having been reported to the authorities for trying to induce an abortion themselves under dangerous conditions.

“A woman who decides to get an abortion is already vulnerable, and then we also have to confront the dire situation of believing we will face punishment,” said Yetlanezi Pech, who was rushed to a hospital, bleeding, after an attempted abortion, only to have an emergency room doctor deny her help and turn her in to authorities.

“I felt so much fear, I felt so unsafe, I felt really, really bad,” she said. “And I also felt alone.”

Ms. Pech is among the thousands of women who have been investigated for illegally obtaining abortion in recent years. In the first seven months of this year alone, 432 investigations were opened across Mexico into cases of illegal abortion, according to the Mexican government.

The ruling on Tuesday set a legal precedent for the nation — and stands in stark contrast to the trend in the United States, where Texas and other states have recently moved to restrict abortion. The court’s decision also raised the prospect of Mexico eventually becoming a destination for American women seeking to end their pregnancies, advocates said, though that would require removing the many obstacles that make abortion difficult to obtain in much of the country.

The Supreme Court refused just before midnight on Wednesday to block a Texas law prohibiting most abortions, less than a day after it took effect and became the most restrictive abortion measure in the nation.

The vote was 5 to 4, with Chief Justice John G. Roberts Jr. joining the court’s three liberal members in dissent.

The majority opinion was unsigned and consisted of a single long paragraph. It said the abortion providers who had challenged the law in an emergency application to the court had not made their case in the face of “complex and novel” procedural questions. The majority stressed that it was not ruling on the constitutionality of the Texas law and did not mean to limit “procedurally proper challenges” to it.

But the ruling was certain to fuel the hopes of abortion opponents and fears of abortion rights advocates as the court takes up a separate case in its new term this fall to decide whether Roe v. Wade, the landmark 1973 decision establishing a constitutional right to the procedure, should be overruled. It also left Texas abortion providers turning away patients as they scrambled to comply with the law, which prohibits abortions after roughly six weeks.

Students, read both articles, then tell us: