Locals have enjoyed Larchmont Boulevard for a century, and so have audiences from around the globe. The Boulevard’s irresistible charm since the beginning has made it one of the foremost filming locations since the start of Hollywood’s movie industry.

Larchmont Boulevard was popular for films even before Julius LaBonte developed the street in 1921.

In 1917, vaudeville actor Harry Langdon, in “Lonesome Luke, Messenger,” is in haste to deliver packages, and he falls off his bike in front of the homes at Clinton Street and Larchmont Boulevard. The Keystone Cops, a clumsy police team popular during the 1910s, often were chased along the Boulevard.

In “Sherlock, Jr.” (1924), thugs chase down comedian and Hancock Park resident Buster Keaton, who hops onto the handlebars of a motorcycle while being chased down the Boulevard. That same year, comedian Harold Lloyd plays Hubby in “Hot Water,” and while bickering with his family, is reprimanded by a police officer for forgetting to drive around an old-fashioned traffic island in front of an “automobile repair shop” at Larchmont and First.

At that same intersection, but one year later, Langdon in “His Marriage Wow” (1925) asks an exasperated traffic cop for directions, after finding himself at the wrong church on his wedding day. Later, he and a crazy wedding guest, played by actor Vernon Dent, nearly smash into the center trolley poles on the Boulevard while on a wild ride to the hospital. Yellow streetcars on the Los Angeles Railway Line No. 3 used to wheel up and down the center of the street.

Langdon does in fact smack into a trolley pole in front of 221 S. Larchmont Blvd. (now vacant; formerly Pickett Fences) in his film “Saturday Afternoon” (1926), having filled the gap between two moving trolley cars and fallen asleep. Later, he and Dent also argue about their failed double dates in front of a “chocolate” shop at Larchmont and First.

Harold Lloyd returns to the Boulevard in 1926 for one of his most successful films, “For Heaven’s Sake,” which sees him comically trying to shove his inebriated friends into one of the running trolley cars.

The Three Stooges, a slapstick comedy trio, filmed at least nine different locations on Larchmont. Their movies showcase the Larchmont trolley cars and sidewalks, such as in “Punch Drunks” (1934), “Hoi Polloi” (1935) and “Pop Goes the Easel” (1935), in which the Stooges hurriedly hopscotch in front of 107 N. Larchmont Blvd. (now the Buck Mason store). The Larchmont Theater, at 147 N. Larchmont Blvd., where local residents got to watch finished films in person, also is visible in “Hoi Polloi.”

Bob Hope in “Off Limits” (1953) is a boxing manager who vandalizes a car at “Ashton Super Service,” which actually is the Richfield Service Station at the northeast corner of Larchmont Boulevard and First Street (now the Bank of America building). Bob Hope returns to the Boulevard again for “Eight on the Lam” (1967), where his character hides at his job site in the “First National Bank” (actually the latest, and last, Security-Pacific National Bank branch on Larchmont) at 147 N. Larchmont Blvd. Hope dashes out to the alley and down to First Street to escape the cops, who are searching for him on the Boulevard, and he then attempts to blend in with a protest crowd at First and Larchmont.

Larchmont Boulevard transitioned away from car chases and cop comedies as the street developed. Horror film “Whatever Happened to Baby Jane?” (1962), with Bette Davis and Joan Crawford, was filmed almost exclusively in Larchmont Village and environs, and characters regularly leave the haunted 172 S. McCadden Pl. mansion to run errands at Larchmont shops.

In “Live a Little, Love a Little” (1968), Elvis Presley as “Greg” follows motorcycle cops at Larchmont and Beverly. 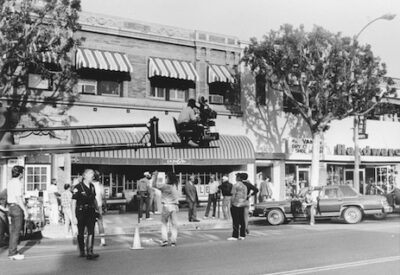 “MACGyver” EPISODES often included Larchmont Boulevard, because the titular character lived in an apartment above the late lamented Larchmont Hardware, at right.

As time marched on, Larchmont also entered the world of television. It appeared in TV series “Dynasty,” in episodes The Mortgage (1984) and The Man (1985). Although only during the second (1986-1987) season, Angus “Mac” MacGyver was able to call Larchmont Boulevard home while he lived in an apartment above the hardware store.

And, of course, the late, longtime Rossmore Avenue resident Huell Howser chats with owner Steve Cohen of Village Pizzeria in “Visiting . . . with Huell Howser” (2007). The following year, in season 5, episode 10, of “Entourage,” Eric “E” Murphy gets stood up at Village Pizzeria.

Since 2010, Larchmont Boulevard has been the backdrop for at least 140 productions. Commercials span everything from ESPN and Chipotle to Geico and T-Mobile. The street has remained popular for movies and TV shows, such as “Hangover 2,” “Private Practice,” “Jimmy Kimmel Live” and “The Voice.” Recently, songwriter Olivia Rodrigo shot a music video at Kasimoff-Blüthner Piano Co., and the still-unnamed new Amazon TV spinoff series of “Bosch” shot a scene in front of Le Pain Quotidien at the end of August.

Even though neighbors sometimes grumble about the inconvenience of on-location film shoots, the shoots can be lucrative for property owners and cost-effective for production companies.

Commercial cinema definitely has been an effective means to preserve historic images of Larchmont Boulevard throughout its first century.