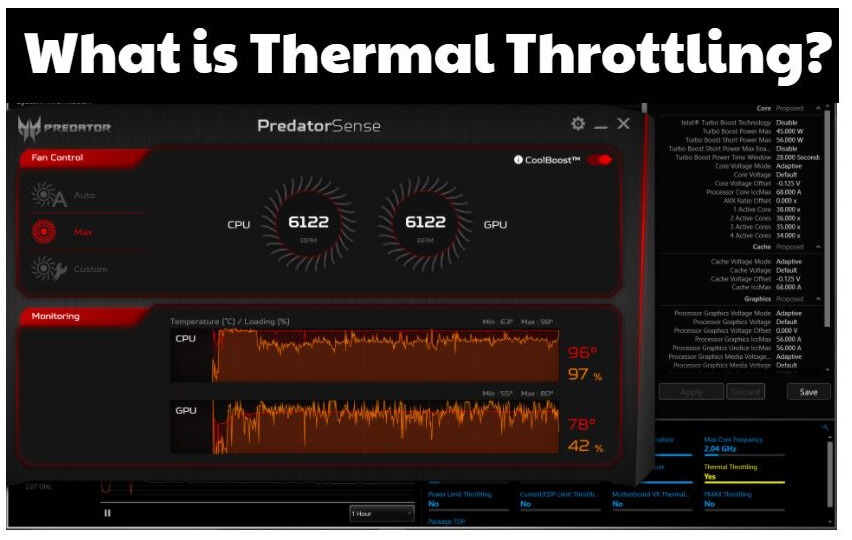 Nothing infuriates us more than a slow computer. There might be multiple reasons as to why your system is experiencing slow performance. It might be due to outdated hardware, less ram capacity, or even due to low storage.

However, another reason that might cause a slowdown is Thermal Throttling. This could impact both CPUs and GPUs and significantly reduce the overall performance of the system. As a result, you might even be unable to launch certain applications like video games or rendering software. In this guide, we will be looking in detail at Thermal Throttling and how you can prevent it.

What is Thermal Throttling?

When the GPU starts emitting heat at a level which the cooling system cannot handle, the memory and core frequencies of the GPU are reduced to lower the heat emission. Naturally, this causes a decrease in the performance of the graphics card. You might even experience a severe FPS drop. However, this is a necessity as the high temperatures might otherwise damage some of the electronic components. Thermal Throttling is just a reaction to the heat buildup and by itself is not a harmful process.

How To Prevent Thermal Throttling

Thermal Throttling is accompanied by a sudden performance decrease. As a result, you can make use of any performance monitoring software like Afterburner or Radeon Software to monitor your temperature and core frequencies. Any sharp changes in the graph shape indicate Thermal Throttling. Normally, Computers have a throttling temperature beyond which it is not designed to handle. We recommend keeping the temperature at least 10 degrees below this temperature.

Intake fans bring in cool air from the outside while the exhaust fans push away the hot air inside. Upgrading your cooling system will definitely help to keep the temperatures in check. Choose a cooling system with a large copper heatsink. Another solution is a water cooling system which is incredibly effective. Water has better thermal conductivity and will help in faster heat rejection. Lastly, we would also advise you to replace the Thermal paste after a period of 6 months. It will help in heat transfer from the GPU or CPU to the heatsink.

By underclocking, we are reducing the clock frequency of the GPU/CPU. In undervolting, we are cutting down the input power to the CPU or GPU. Both these methods will help to lower the temperature by a lot. However, these methods might not be ideal as they can result in instability problems.

How to check if the CPU is Throttling?

Although this can be done by various monitoring tools, the easiest method is through Windows 10.

Why is your CPU Throttling?

CPUs throttle usually to reduce temperatures and save power. Sometimes, you might have chosen a power saver plan from the Windows Power Plans. This will cause CPU throttling. Moreover, if you have replaced the thermal paste in the CPU, it might lead to high temperatures and also cause throttling.

We hope you enjoyed this guide on Thermal Throttling. Fortunately, it is an easy problem to resolve and with our solutions, it can be easily done. For any queries regarding the content, do write to us.