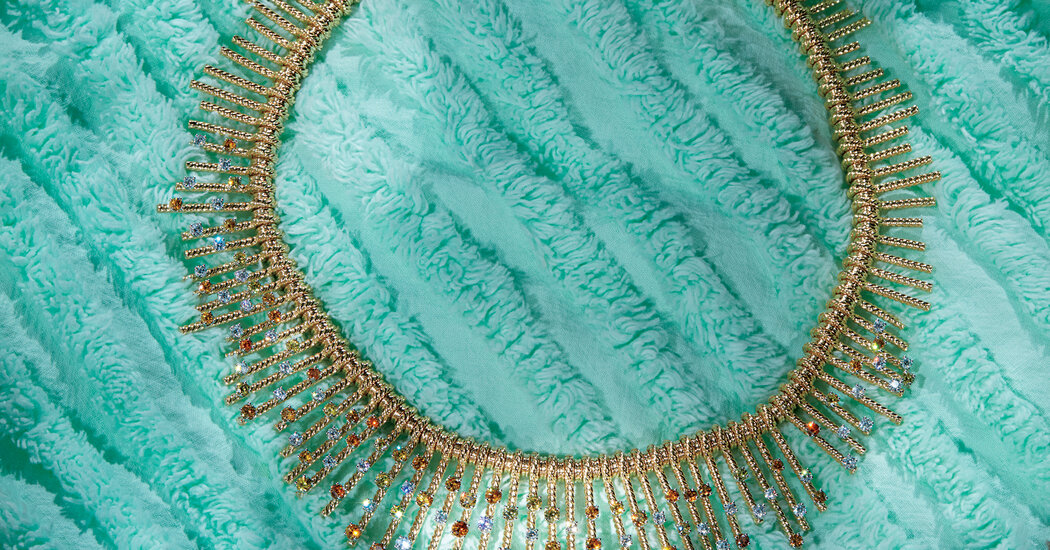 The Alsatian-born mid-20th-century jewelry designer Jean Schlumberger, who began his career creating surrealist buttons and costume jewelry for the Paris-based couturier Elsa Schiaparelli, spent nearly 30 years at Tiffany & Co. There, in a mezzanine atelier and salon within the American house’s Fifth Avenue flagship, he crafted fanciful gem-encrusted bijoux inspired by flora and fauna — sea horses, parrots, jellyfish — for such clients as Elizabeth Taylor, Bunny Mellon and Jacqueline Kennedy Onassis. But he also produced structurally complex works, including the Fringe Necklace from 1956. Over the years, this collar, which evokes ancient Greek adornments with its hand-twisted gold roping dotted with gemstones, has been frequently iterated by Tiffany. Its most recent interpretation is crafted in 18-karat yellow gold with 65 autumnal diamonds and 50 white diamonds, set in platinum so the stones appear to float above the piece’s radiating braided elements — a fitting tribute to Schlumberger’s technical prowess and expansive imagination. Tiffany & Co. Jean Schlumberger Autumnal Diamond Fringe Necklace, price on request, (800) 518-5555.