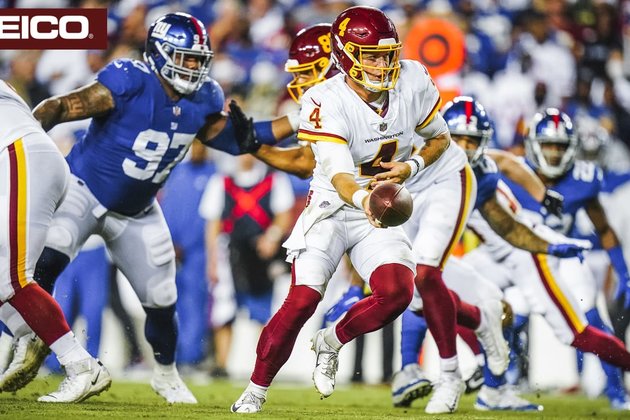 The Washington Football Team heads into the weekend after winning its Thursday night game against the New York Giants in dramatic fashion. Here are some of the top quotes from the week, presented by GEICO.

Taylor Heinicke on the last few minutes of the game:

“It was a whirlwind to go down and have that two-play drive and send it back and score a touchdown and take the lead. The defense did a great job of getting the stop and getting us the ball. We had a chance to close it out there with a first down. Just the interception [CB James] Bradberry made a great play. He was with us in Carolina. Me, [Offensive Coordinator] Scott [Turner] and Bradberry in Carolina. He’s seen that play before. He jumped it and made a great play. But yeah, had a two-minute drill. We had faith in our defense to get the ball back and we knew we just needed to get a field goal and we practiced that situation a lot in practice. So I thought the guys were ready for it to come to fruition and for us to accomplish that goal in a game was huge.”

Chase Young on the win:

“We came out, got the W and at the end of the day, that’s all that matters. It feels good. A packed stadium. Then, you know, this long weekend. It’s bad when you just took a L. I’m glad we came out with this dub.”

“Defensively, I would say we played very similar to last week. We did enough to get the win, but moving forward, we just have to do better. It’s not like the issues are we’re just not good enough, we obviously have the talent, we just got to focus on the little things, and honestly, thank God our offense was there to save us time and time again.”

Landon Collins on QB Taylor Heinicke in the last five minutes of the game:

“He was confident. We know he is a gamer. He came out there ready to play. We knew he had it in his hands, he was going to go out there and play ball. Everybody’s gonna make mistakes; but at the same time, it’s a game of inches and he came out the second time and did his thing.”

J.D. McKissic on the 56-yard play and his role on offense this game:

“On the play, we ran that play earlier. I had the option. I knew he was playing tight, and I was waiting for Coach [Offensive Coordinator Scott Turner] to call the out and up all night. Finally got the opportunity to run it. Something we had been working on for a while in practice and finally had a chance to hit it. He bit it, he took it out and got the 56-yarder.”

Terry McLaurin on the confidence in QB Taylor Heinicke:

“When he came out in that playoff game, and he played the way he did, it was a unique situation for me because I didn’t practice that much because I was hurt. But he’s always ready for his moment and I love guys who are always ready for their moment, always prepared. He doesn’t complain about the reps that he gets in practice even when he wasn’t the starter; he just makes the most of his opportunities. That’s all you could ask for. He did a great job controlling the tempo tonight. He got us into hurry-up situations, he slowed it down, he made great passes, he took what the defense gave him, and he gave playmakers the chance to make plays. And when you got a guy like that you just want to continue to make plays for him. We’re lucky to have Taylor and I know he’s going to continue to grow and help us going forward.”

Dustin Hopkins on game winner and attempting two kicks to secure the victory:

“Thank you, Lord. How about that? You know, I saw the guy offsides then I turned to [P] Tress [Way] and I said, ‘watch this’. Nah, I feel really fortunate, obviously, I’ve talked to you all about being process oriented. Honestly, the first kick, and this is the tough part about kicking, the first kick I hit much more solid than the second kick. But just the slight angle, you know what I mean, so obviously I’m happier with the result, like for myself, but also for our team and what that what the implications will be later. You know, I hope but process wise, I’m always learning, always trying to get better, and just feel very fortunate and feel great about it.”

Ron Rivera on the win:

“I feel fortunate. I was thinking about these guys as we were playing this game. I know last year that we had a few close games with these guys. The way that we respond, they are very resilient. This team reminds me a lot of last year’s team, the way that they stuck around and kept fighting, good things will happen eventually. That is what happened today. We made a lot of mistakes and missed a lot of opportunities, but we were resilient.”

Taylor Heinicke on his first win as a starter:

“It’s amazing. First start was what, two or three years ago in Carolina? I threw three picks and tore my tricep. It was just a brutal thing. That was my last start until last year against Tampa Bay [Buccaneers]. Coming into Tampa Bay last year, I had a good game but ultimately fell short. Finally get that first win, so it’s nice to get that weight off your shoulders and get the ball rolling.”

“That is exactly how he played; he was very gutty. The thing that was really impressive with him was the way that he bounced back after the turnover. Prior to that, he went down in three plays and scored a touchdown. Then he turned around and while we were trying to kill the clock, he made a bad read and bad decision. He should have put the ball in his (running) backs hands in the flat instead of trying to throw the curl and [CB] James Bradberry made a heck of a play. But when given the opportunity, he stepped up again.”