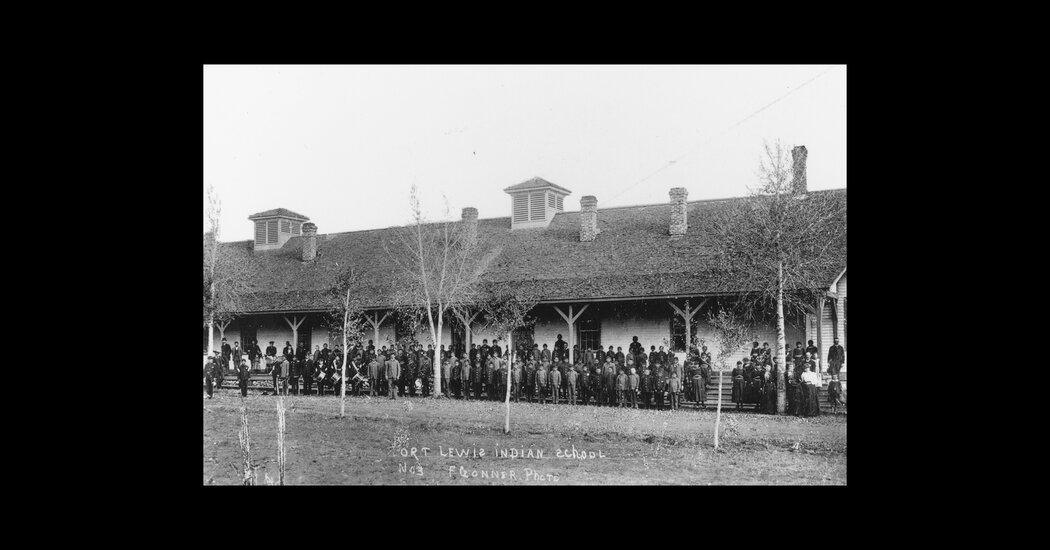 Featured Resources: For this lesson, students can read the article “Lost Lives, Lost Culture: The Forgotten History of Indigenous Boarding Schools” or listen to The Daily episode “State-Sponsored Abuse in Canada” from the beginning until 11:40.

(Note to teachers: The podcast contains accounts of physical and sexual abuse. Please listen to the entire episode to make sure it is appropriate for your class.)

The discovery of the remains of hundreds of children this summer at two former boarding schools for Indigenous children in Canada has rekindled discussion of a dark chapter in Canadian and American history.

In the late 19th century and throughout the 20th century, Indigenous children in parts of Canada and the United States were taken from their families and forced to attend residential schools where Indigenous languages and Indigenous cultural practices were banned, and those restrictions were often enforced through violence. The abuse has left a lasting effect on Indigenous communities today.

In this lesson, you will learn more about these schools, hear from survivors, and consider the importance of history, memory and justice.

What do you know about Indigenous boarding schools, also sometimes referred to as “residential schools”?

Create a K/W/L chart to record your thinking before reading the featured article or listening to the podcast episode. Write what you already know about this period in history in the “What I Know” column. Write down any questions you have in the “What I Want to Know” column.

Share your facts and questions with a partner. What else can you come up with together?

Read the article “Lost Lives, Lost Culture: The Forgotten History of Indigenous Boarding Schools” or listen to The Daily episode “State-Sponsored Abuse in Canada” until 11:40. Then answer the following prompts:

1. Describe in your own words what Indigenous boarding schools were like.

2. Who ran these schools? For what purposes were they created?

3. What methods did the schools use to enforce the assimilation of Native American children?

The remains of what are presumed to be Indigenous children have been discovered at the sites of defunct boarding schools in Canada. Here’s what you should know:

5. Indigenous people rebelled against the boarding schools in ways both big and small. Give one example of an act of resistance from the article or podcast.

6. Add to your K/W/L chart from the warm-up. What key facts have you learned about Indigenous boarding schools? What questions do you still have?

The story of Indigenous boarding schools, and the hundreds of children whose remains have been discovered at school sites in Canada, raises important questions about history, memory and justice.

To learn more about these “missing children” and what is being done to atone for their deaths, listen to the rest of The Daily episode, from 13:40 to 25:40, or read the article “How Thousands of Indigenous Children Vanished in Canada.”

Then, with your classmates, discuss:

Learn more about Lesson of the Day here and find all of our daily lessons in this column.

13 Headband and Half Wigs That Look Amazing