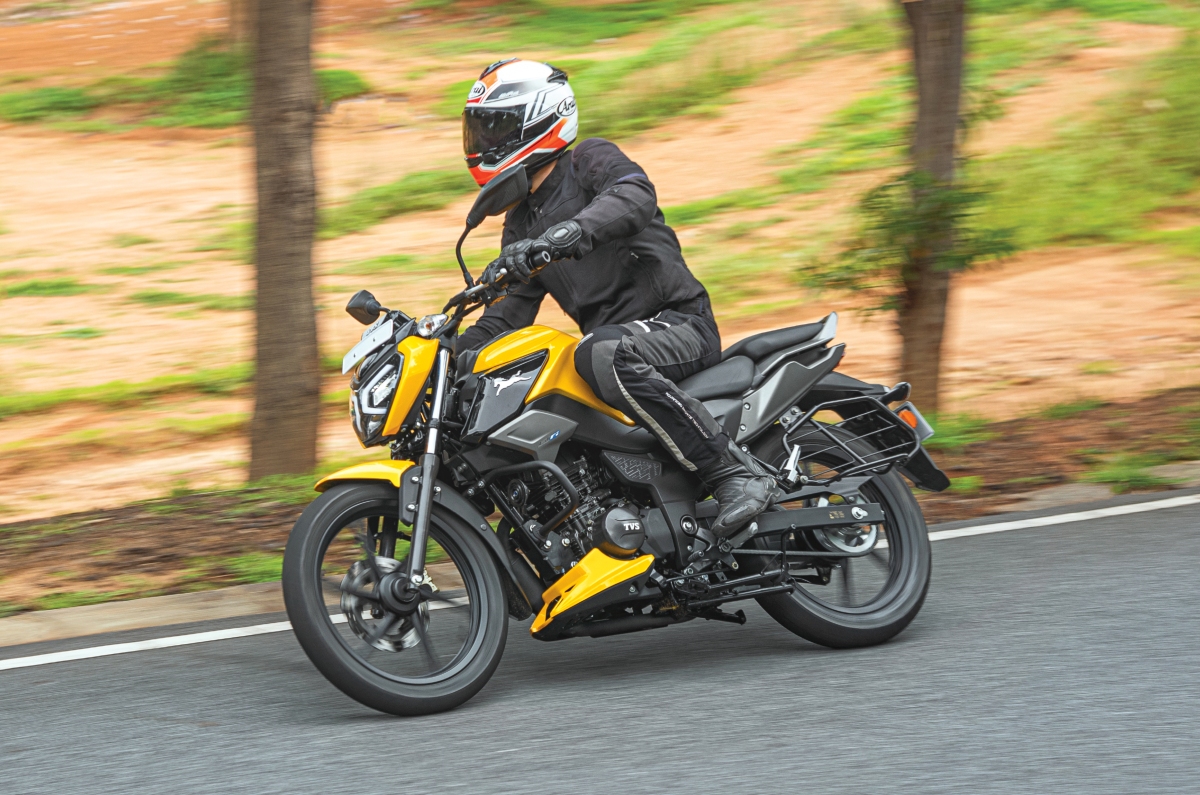 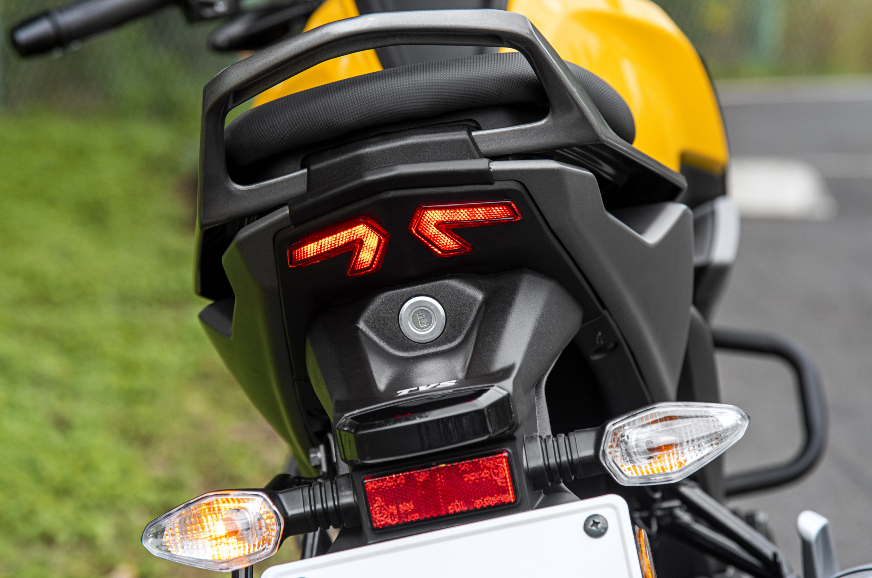 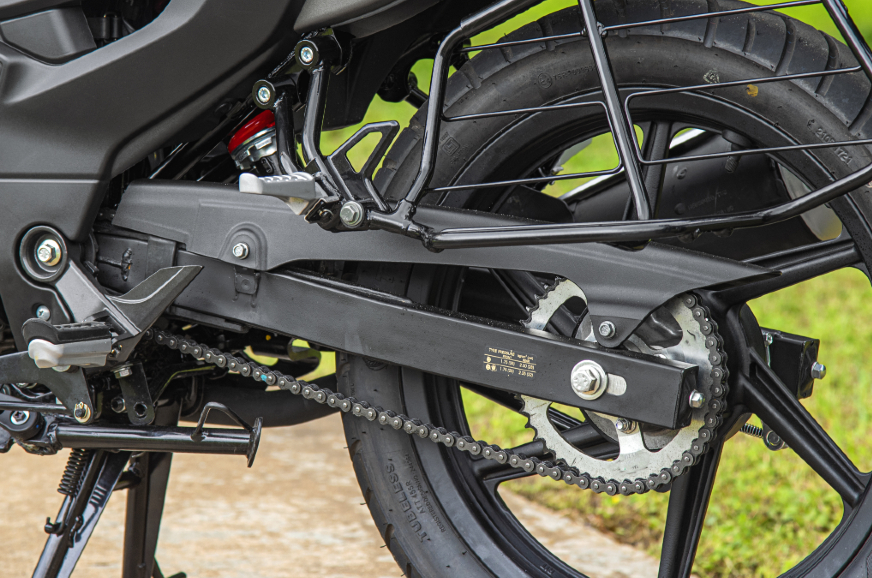 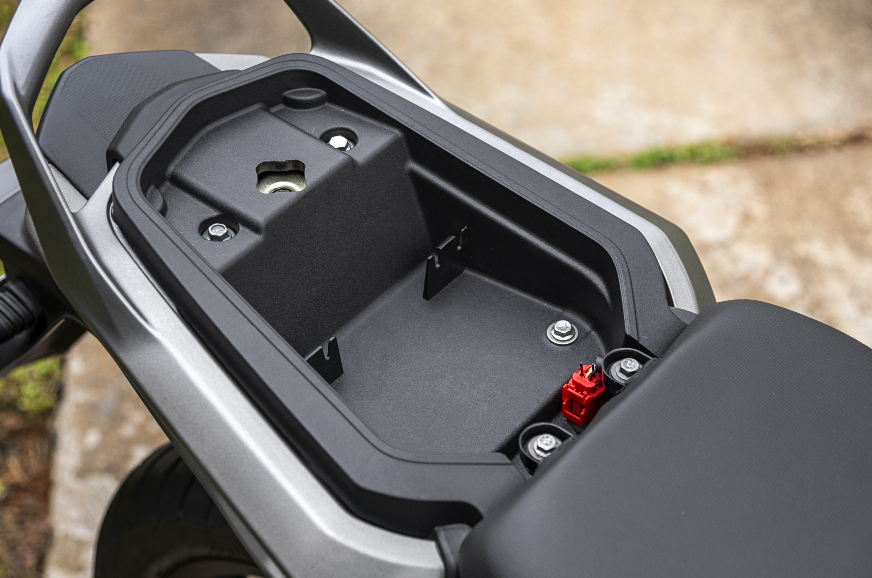 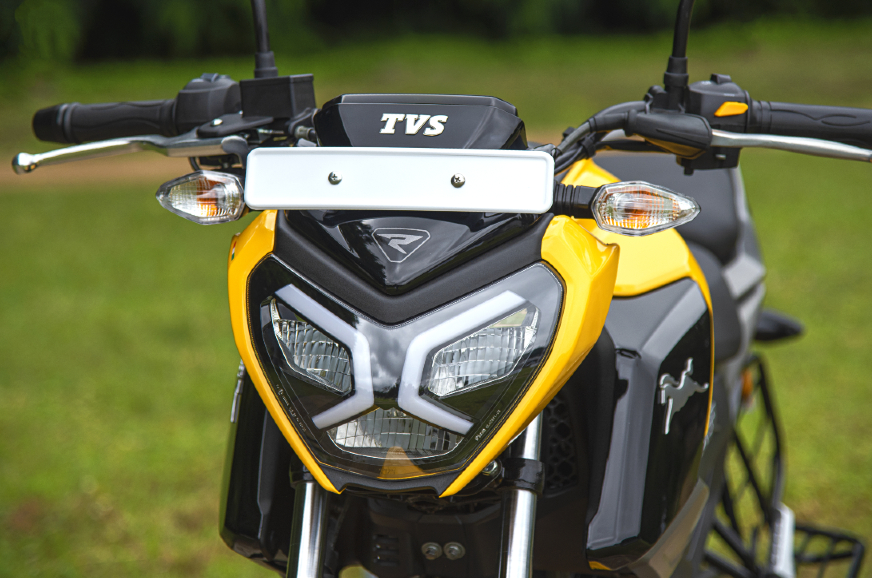 Is there a more mind-numbing word in the world of motorcycling than ‘commuter’? Well, TVS wants to change that because its latest 125 says it can meet budget sensibilities while being fun and desirable.

Meet the Raider 125 and the first thing you’ll think is that it’s probably a 150cc or 160cc machine. The bike has a sense of presence you don’t expect from the mostly sensible 125s and the design is quite likeable.

Its sharp looking LED headlamp with a striking set of Daytime Running Lamps is definitely easier on the eye than the quirky headlamp from the bigger RTRs. Then there’s the large, sculpted fuel tank that looks like it came from a bigger bike. TVS has made it further interesting in the form of small silver coloured tank shrouds and a belly pan. 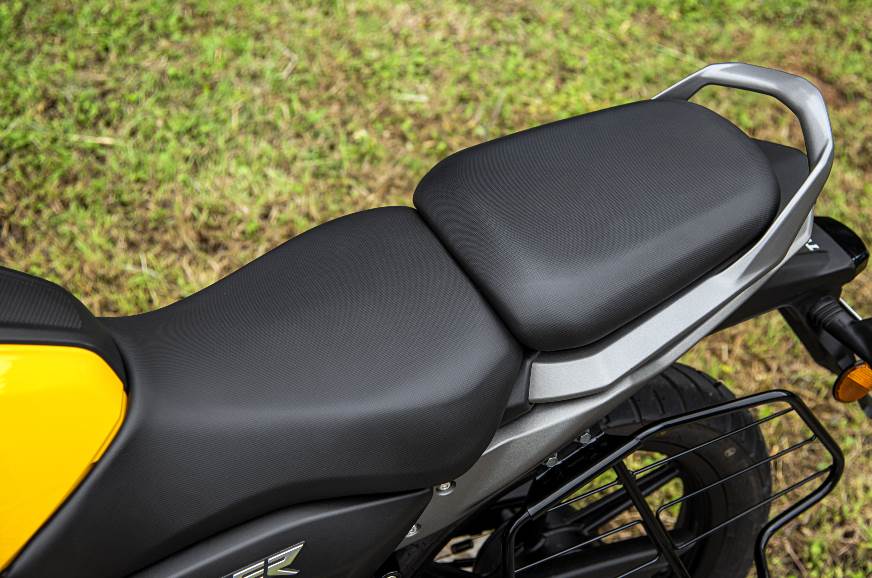 Split seats add to the sporty flavour, but the rear section is a little more straightforward with a large and practical grab rail and a couple of neat looking LED brake lamps. There are four colours available including black, an interesting looking dark blue and a nice shade of red.

The good news keeps coming when you sit on the bike too. There is no boring commuter riding position here and TVS has injected a dash of sportiness into the foot peg position along with the mild lean forward to the handlebar. It’s still nice and comfortable and the seat to foot peg ratio is not as cramped as on the bigger Apache RTRs. The split seats are nicely padded and there’s enough room for bigger riders too. Shorter riders also won’t feel left out thanks to the friendly 780mm seat height. 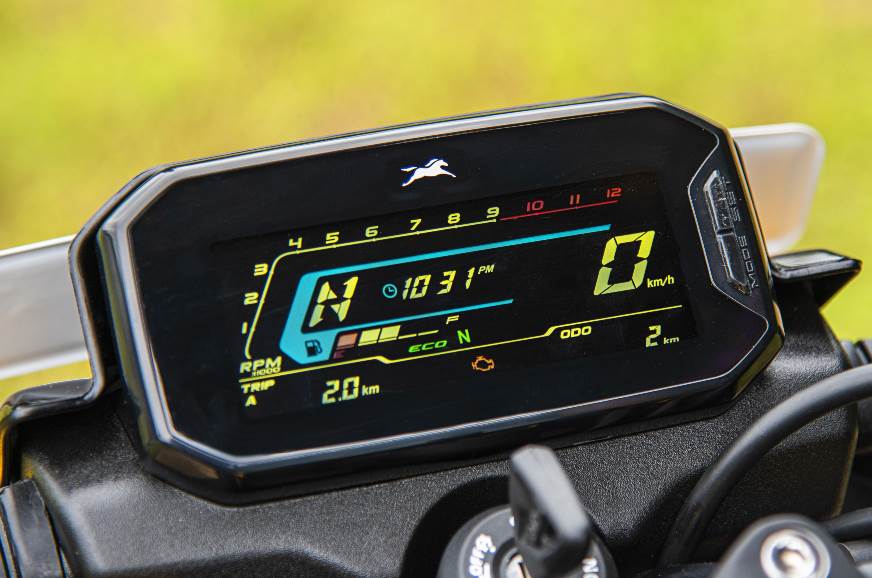 The company has also put thought into designing things like the interesting looking brake lever, the generous under seat storage space and the optional USB port mounted ahead of the fuel filler cap. The most premium bit is perhaps the new negative-LCD display that shows plenty of information including a gear position indicator, two trips, fuel economy, range and more. The bike even has a side-stand down engine kill feature which is rare at this price point.

And that’s not all because TVS will even offer a top model with Bluetooth connectivity and a TFT display. But that bike will launch a few months later. 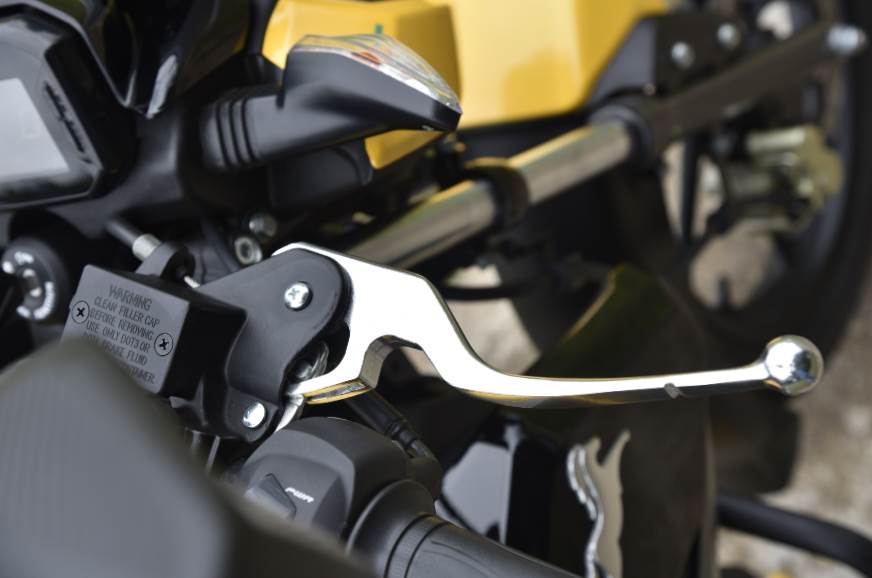 Effectively, the TVS Raider is easily one of the most feature-packed motorcycles in the segment. But there are a few rough edges like the iffy looking plastics in the switchgear and the loose feeling fuel-filler flap. Mostly though, quality levels and finish are quite good and the Raider feels more premium than you’d expect from a typical 125cc machine.

This is TVS’ first 125cc bike in around a decade and they have built a new engine for the job. On paper, the 124.8cc three-valve architecture is identical to the motor from the Ntorq, but the company says that’s where the similarities end. We’re told that all internal components are new and as a result this engine makes two hp more than the standard Ntorq for a total of 11.38hp at 7,500rpm and 11.2Nm at 6,000rpm.

The engine also gets a clever heat management system where the oil is cooled via exposed fins behind the clutch cover. This removes the need for the expense and complexity of an external oil-cooler. 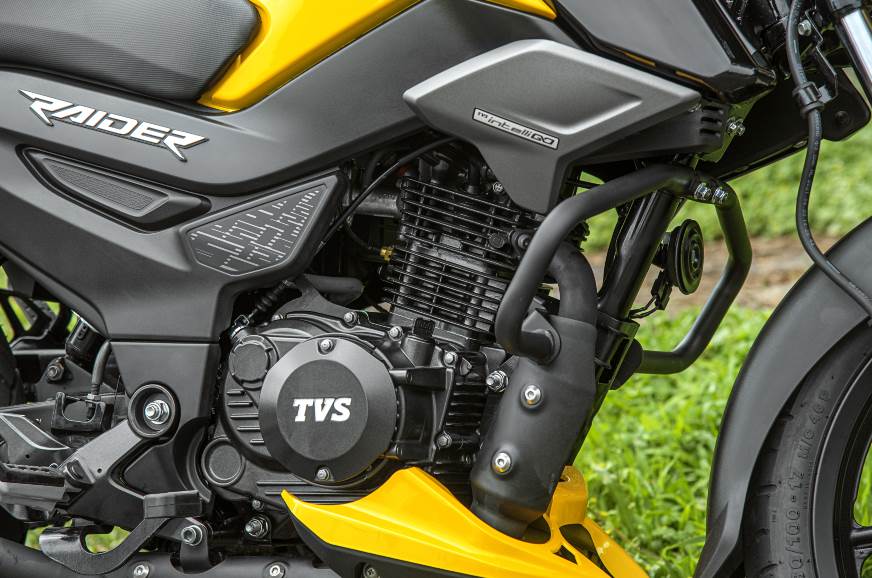 The Raider is also the first TVS motorcycle with an integrated starter generator and that means that it does that spooky silent start without any typical starter motor sound. The ISG also enables a start-stop system where the engine automatically cuts off if it has been idling for a while. A quick blip of the accelerator starts the engine back up and the system seems to work smoothly, but this is something we will need to test on public roads in heavy traffic.

Another segment-first is that the Raider gets two riding modes – Eco and Power. These modes don’t change the power output, but Eco mode brings the rev limiter in at 8,000rpm in the first four gears and at 7,000rpm in fifth gear, which restricts the top speed a little. Eco also offers slightly gentler responses and TVS says that it will improve fuel efficiency by about three percent. Power mode, meanwhile, gives you crisper responses, but deactivates the Start-Stop system. 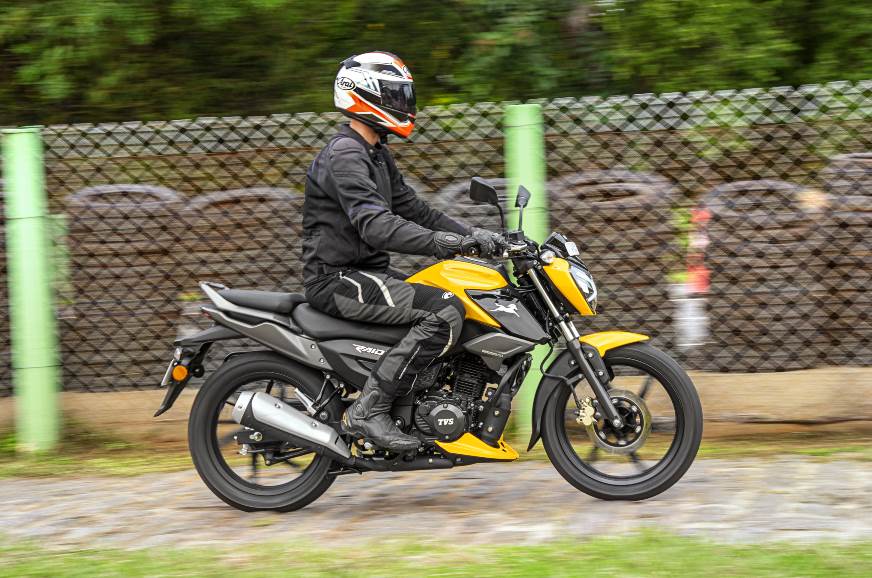 The value of riding modes on a 11hp motorcycle, perhaps, counts for more on the brochure than the actual riding experience. But don’t let that take away from the engine itself, because this little thing is mighty impressive.

First of all, refinement levels are really impressive and the engine is very smooth, no matter the speed. The actual performance is quite nice too and this engine has the most torque in the segment, while the quoted power comes a close second to the 125cc Pulsar.

The acceleration feels strong for the segment and is accompanied by a typically peppy exhaust note that you’d expect from a TVS. We saw an indicated top speed of 107kph down the long straight at the TVS test track – and even at this point, the engine didn’t really feel stressed or unhappy.

The motor is quite tractable too, with peak power coming in at a low 7,500rpm and it doesn’t mind being in fifth gear as low as 35kph. The transmission is smooth and precise and all of this means that the bike should be quite nice to ride on the street as well.

TVS says they have focused on fuel efficiency too and claim that customers can expect a real world efficiency figure of 67kpl. That is something we will reserve commenting on until we can fully test the bike. But as things stand, this new engine is a joy to use.

The Raider gets a brand new chassis holding things together. This single-downtube frame uses a monoshock rear suspension and the whole bike weighs 123kg. The slim 30mm telescopic fork and the 5-step preload adjustable shock have been tuned for that typical soft and supple feel that you would expect from a TVS and road comfort should be quite good.

While we will have to wait to confirm that, what is clear right now is that the Raider is a sweet little handler. The bike feels incredibly light and agile, to the point that you need to get used to how quickly it reacts to inputs.

Once you do, there’s plenty of fun to be had and the TVS Remora tyres have lots of grip when you need it. We never scraped the foot pegs in the corners, but the rear suspension does feel a little soft and bouncy when you really push it to the limit. Bumping up the preload helped, but for most customers in the segment, this level of handling is sure to be very engaging. 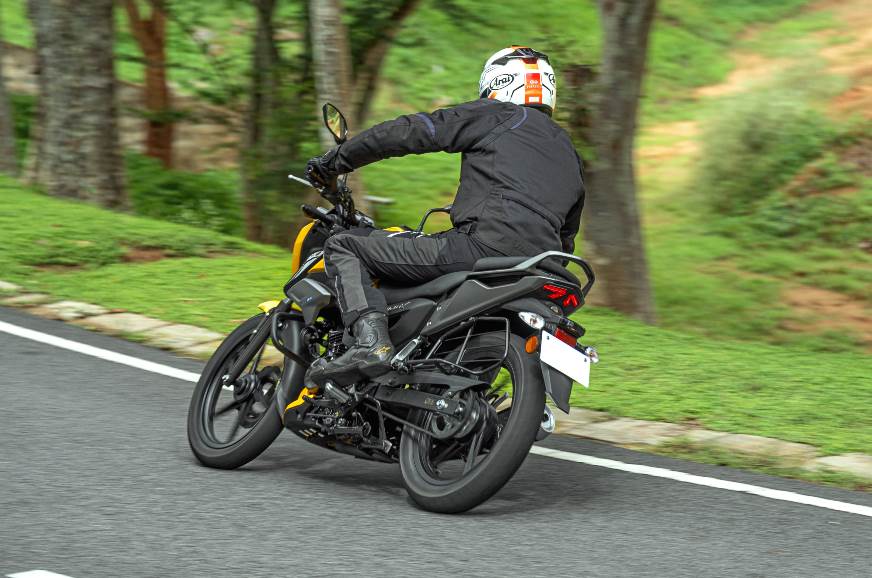 Braking is taken care of by a 240mm front disc and a 130mm drum at the back. The front brake has a nice firm feel at the lever, but the performance is a little dull – as you would expect from a bike in this segment. There’s no ABS, but the combined braking system works well. However, you will be able to lock the rear brake if you step on the lever hard enough. TVS will also sell a base variant of the Raider with a drum brake at the front, but we did not get to experience that bike.

Prices start at Rs 77,500, ex-showroom Delhi, for the drum brake model which is excellent value. That puts the Raider right on par with the relatively youthful and sporty 125s like the Bajaj Pulsar 125 and the Honda SP 125, not to mention making it a full Rs 20,000 cheaper than the Pulsar NS 125.

However, TVS will charge you Rs 8,000 more (Rs 85,469) for the disc brake model that you see here. That seems an unreasonable amount for just the addition of a front disc, since the company tells us that the disc model gets no additional features. Perhaps TVS will raise the price of the base model in a few months to make that gap smaller. 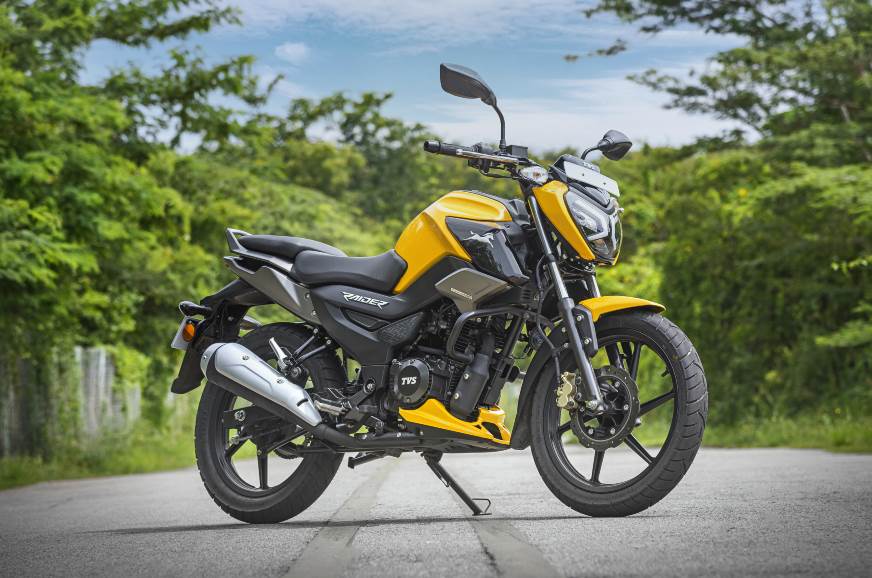 But even so, the Raider packs plenty of game changing style and features along with a genuinely fun to ride character, and that makes it not only a convincing 125cc bike, but also a legitimate alternative to the likes of the popular Yamaha FZ which produces just 0.6hp more.

We’ve still got lots to discover when we ride this on public roads, which is where it belongs, but after a fun blast at the TVS test track, things look good. The Raider comes at a time when motorcycles in general are becoming painfully expensive, buying powers have been curbed and the simple act of visiting a fuel station leaves you angry and frustrated. A relatively affordable yet stylish, feature packed and genuinely fun to ride bike could just be what the doctor ordered in these trying times.