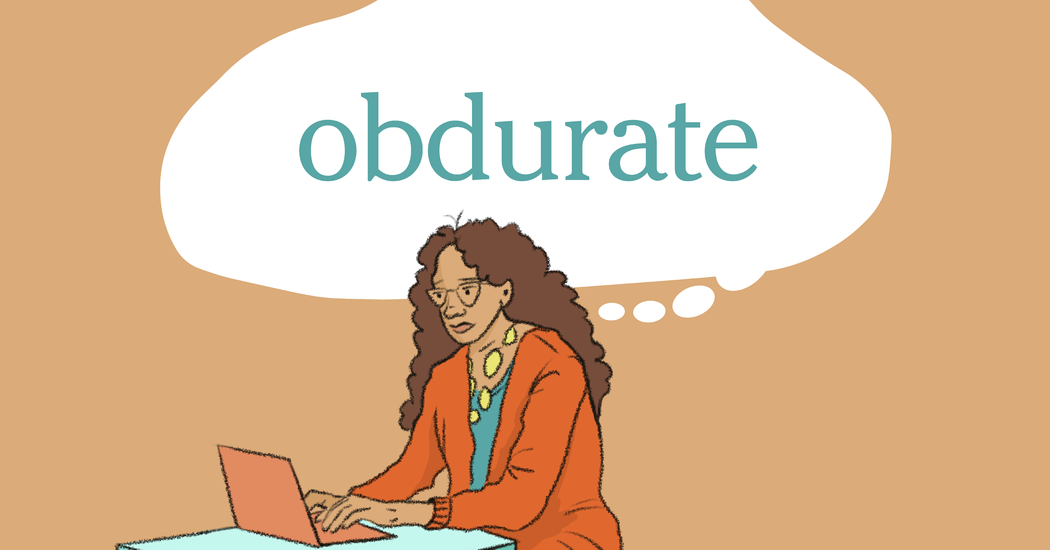 The word obdurate has appeared in 22 articles on NYTimes.com in the past year, including on Dec. 30 in the obituary “Joe Clark, Tough Principal at New Jersey High School, Dies at 82” by Richard Sandomir:

Joe Clark, the imperious disciplinarian principal of a troubled New Jersey high school in the 1980s who gained fame for restoring order as he roamed its hallways with a bullhorn and sometimes a baseball bat, died on Tuesday at his home in Gainesville, Fla. He was 82.

… And, in 1986, to keep thugs from entering the school, he ordered the entrance doors padlocked during school hours. Fire officials responded by having the locks removed, citing the safety of students and teachers. A year later, the city cited him for contempt for continuing to chain the doors.

“Instead of receiving applause and purple hearts for the resurgence of a school,” Mr. Clark said after a court hearing, “you find yourself maligned by a few feebleminded creeps.”

Though the padlocking episode put him in conflict with the Paterson school board, his no-nonsense style led to an interview for a White House job in early 1988. Before turning it down, he insisted that if he took the job it would not be because of any pressure from the board.

“I refuse to let a bunch of obdurate, rebellious board members run me out of this town that I’ve worked in so assiduously for 27 years,” he told The Washington Post in 1988. A Post headline called him “The Wyatt Earp of Eastside High.”

Can you correctly use the word obdurate in a sentence?

If you want a better idea of how obdurate can be used in a sentence, read these usage examples on Vocabulary.com.