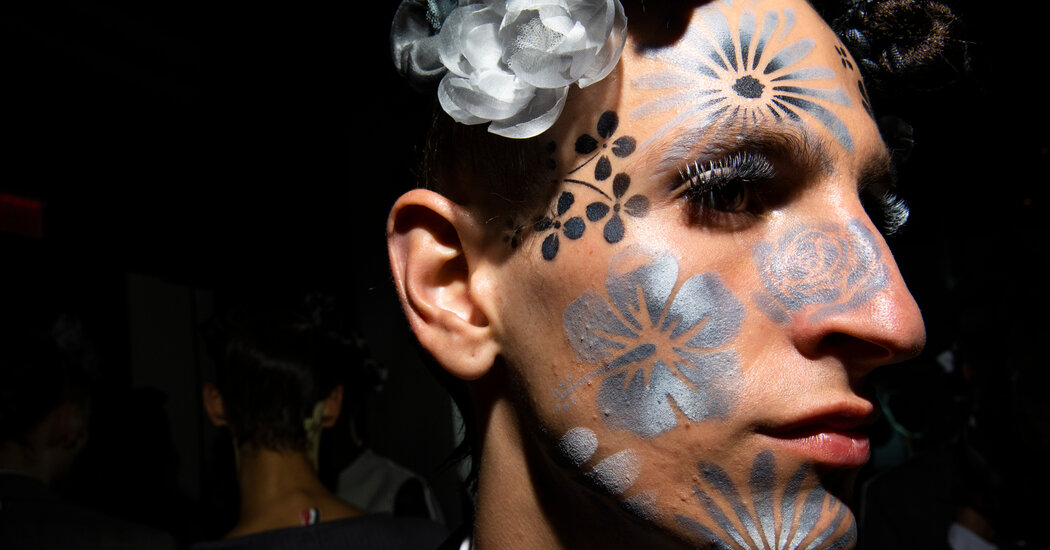 There are many things to consider when turning a person into a floral shrub.

For the designer Thom Browne, the transformation began with a cape with exaggerated shoulders, from which hundreds of silk flowers cascaded to the floor. The flowers, in various shades of Mr. Browne’s signature gray, were hand-applied. Models wore the capes at the start of Saturday’s show, sitting on concrete pedestals in a garden created by Mr. Browne as the setting for his show, which explored themes of time, decay and rebirth. (If this sounds very serious, consider that it opened with two people riding penny-farthing bicycles while wearing transparent wire horse heads.)

For his shrub people, Mr. Browne wanted to extend the flower camouflage to their faces — the only exposed parts of their bodies — and hair. So he brought on the makeup artist Isamaya Ffrench, a longtime collaborator, and the hairstylist James Pecis.

Ms. Ffrench created stencils for airbrushing florals onto the models’ faces, inspired by the embellishments on the capes, while Mr. Pecis designed hairpieces using the same silk flowers.

The airbrushing was particularly impressive, resembling Post Malone-esque full-face tattoos from afar. But up close, every petal was defined; like the cape, they were rendered in various shades of gray, but unlike the cape, there was a bit more variety, with hibiscus flowers and monstera leaves making appearances on chins and cheeks.

Later in the show, models wore more abstract makeup that looked like dried clay dabbed on their skin, inspired, the label said, by Greco-Roman statuary. But the floral makeup was memorable for how it complemented the suits that the caped models eventually revealed, which were asymmetric and incomplete — missing arms or short-sleeved on one side.

Mr. Browne has a unique ability to create something rigorously structured yet slightly off-kilter — the floral faces were no different.