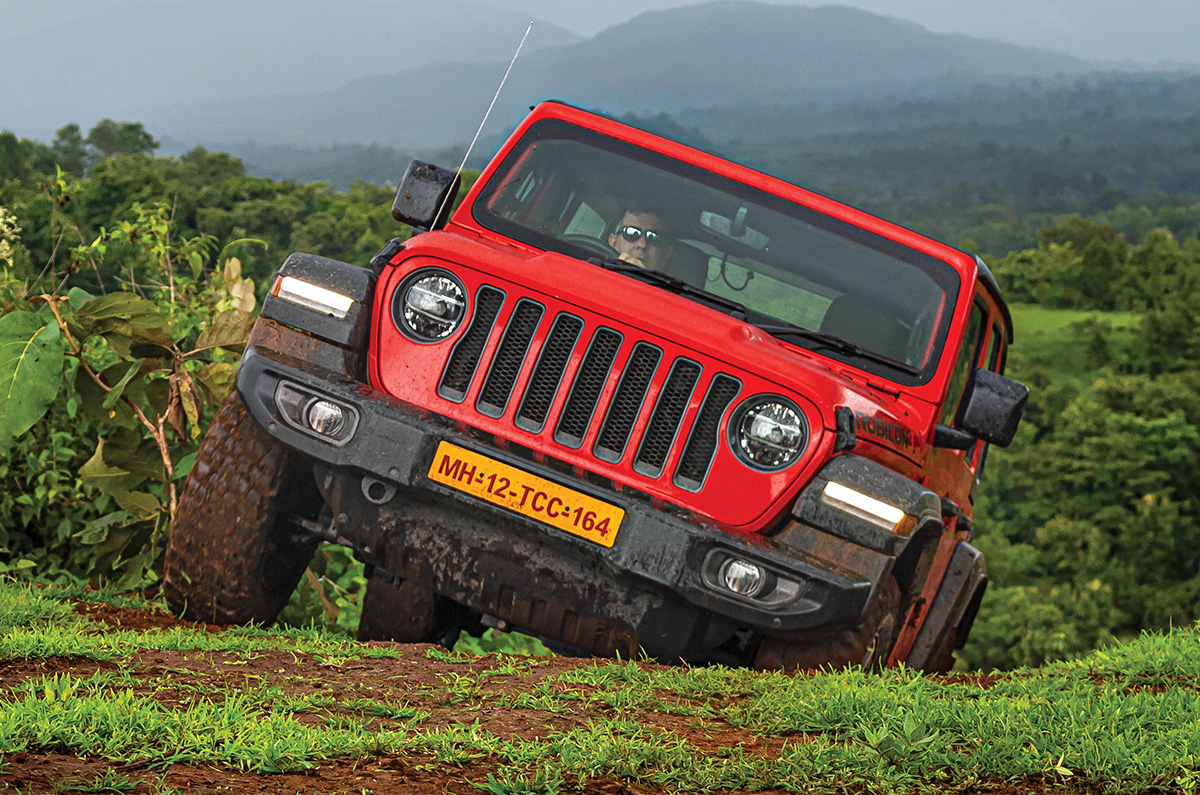 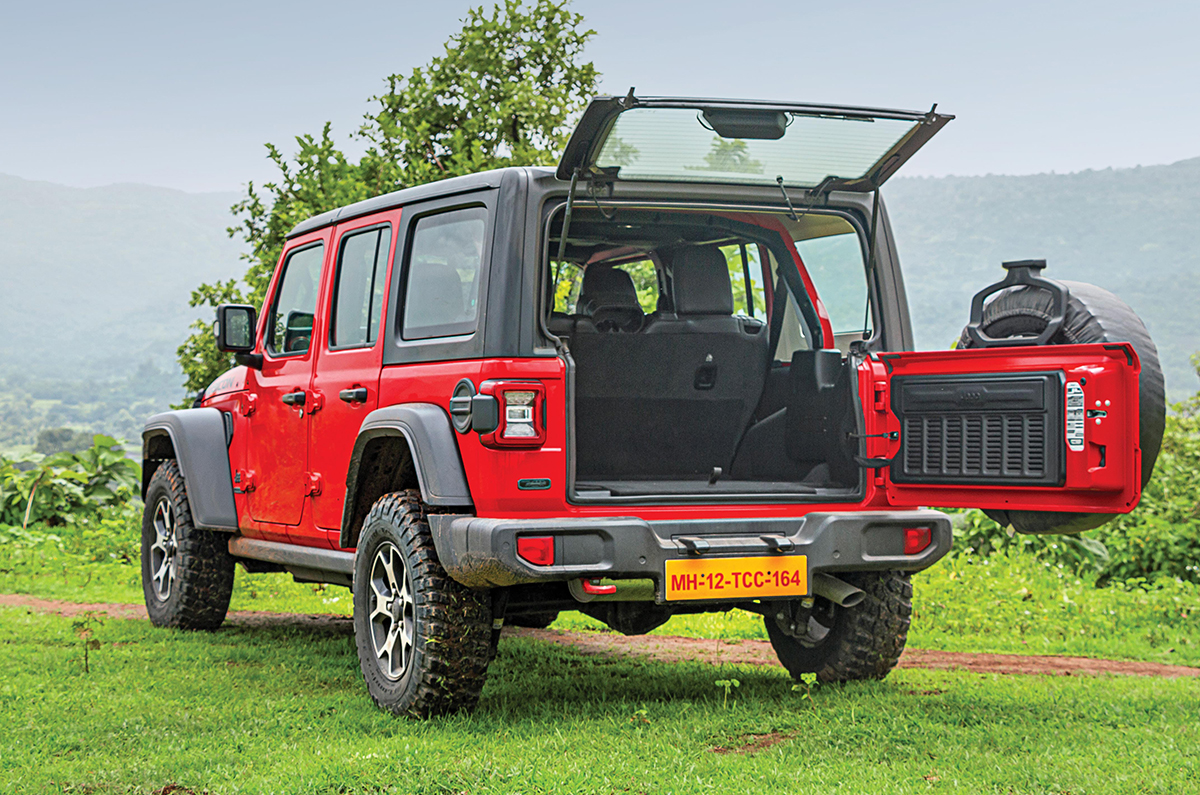 You could miss the ‘Made-in-India’ sign, which is innocuously inscribed on the inside of the tailgate, and that, in reality, is the very reason we are driving the Jeep Wrangler again. But is a ‘made-in-India’ Wrangler such a big deal? Yes and no.

Yes, because this is the first time in the 34-year history of the Wrangler that it’s being produced anywhere outside the United States but, more importantly, this locally assembled version gets the benefit of much lower taxes than an imported one. And it’s the huge customs duties savings which have lowered the Wrangler’s price from Rs 63.9 lakh to Rs 53.9 lakh for the Unlimited and from Rs 69.3 lakh to Rs 57.9 lakh for the Rubicon (ex-showroom), that prompted FCA to do the unthinkable, which is make the Wrangler outside the country that symbolises the Jeep spirit. At the end of the day, money talks and the cost advantages of local assembly, to the tune of Rs 10-11 lakh, could not be scoffed at.

Made-in-India Wrangler identical to imported one, but much cheaper.

However, in addition to being built from completely-knocked-down (CKD) kits, there’s no change in the Wrangler’s spec and it’s identical to the imported one, which explains why it isn’t such a big deal. In fact, practically all the parts and components are imported and merely locally assembled in FCA’s Ranjangaon factory as a way of beating the considerably higher taxation structure on completely-built-up (CBU) imports. That’s just the way the industry works!

So, if the locally assembled Wrangler is identical to the imported one we reviewed in 2019, why are we driving it again? Well, because we just needed any excuse to get back behind the wheel of the this go-anywhere 4×4, and also because our test car happens to be the extreme Rubicon variant, which takes the off-roading game a step further. To crawl through anything, it gets a much deeper 4:1 ‘crawl’ ratio (the regular Unlimited variant is a higher 2.72:1), and electronically locking front and rear differentials. Also exclusive to the Rubicon variant is the ability to electronically disconnect the anti-roll bar (or sway bar, in Jeep speak) with the press of a button for even more axle articulation over bigger obstacles. The other differences between the Unlimited and Rubicon variants are the wheels and tyres. The Unlimited gets a set of 18-inch alloys but the Rubicon gets smaller 17-inchers to accommodate 255/75 tyres with beefier sidewalls, which give the Rubicon a higher ground clearance and better approach, ramp and breakover angles than the Unlimited. With the exception of the ‘Rock-Trac’ full-time 4WD system, the front and rear solid axles bolted onto a tough ladder frame and the 268hp, 2.0-litre, four-cylinder, turbo-petrol motor mated to an 8-speed torque-converter automatic are common to both variants. There is no manual transmission option, though. 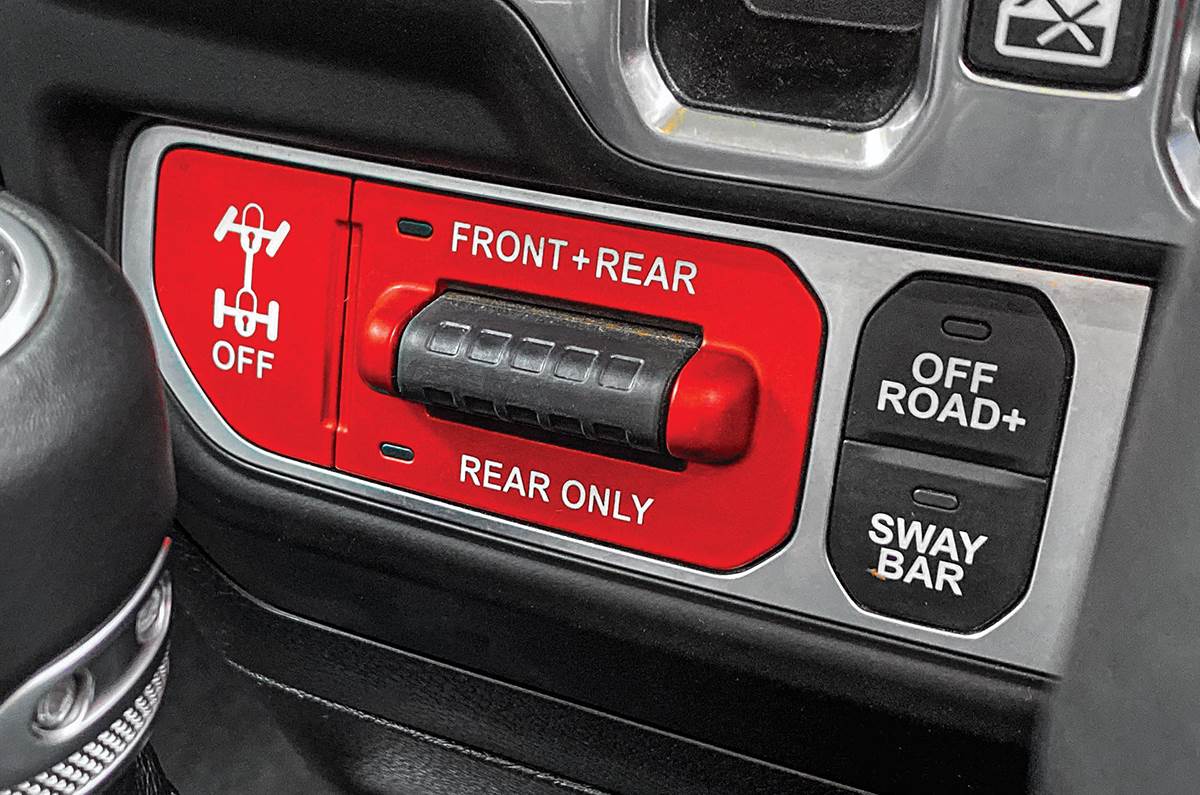 Buying the extreme Rubicon-spec for long highway trips makes as much sense as taking a Lamborghini to Ladakh. On a side note, we did once drive a Huracán all the way to Khardung La just to show that it can be done. No, it didn’t make any sense, but made for a great story! Obviously, the Wrangler doesn’t struggle on any surface, at any altitude or in any weather, but it feels most at home performing in dirt, slush or mud. Hence, it would have been unkind not to take the Wrangler into its natural habitat and deny it the chance to play with its 4×4 toys.

The Learn Off-Road academy’s training ground near Pali, Maharashtra, with its assortment of tracks, is just the perfect playground for the Wrangler, which feels as happy as a wild boar wallowing in mud. Incessant rain has turned mud tracks into gooey chocolate and grass into a lush green but soaking wet, low-friction carpet. The serene surroundings are deceptive and can be treacherous if you put a wheel wrong in a lesser 4×4. But in the Wrangler you have to do something really stupid to get stuck. 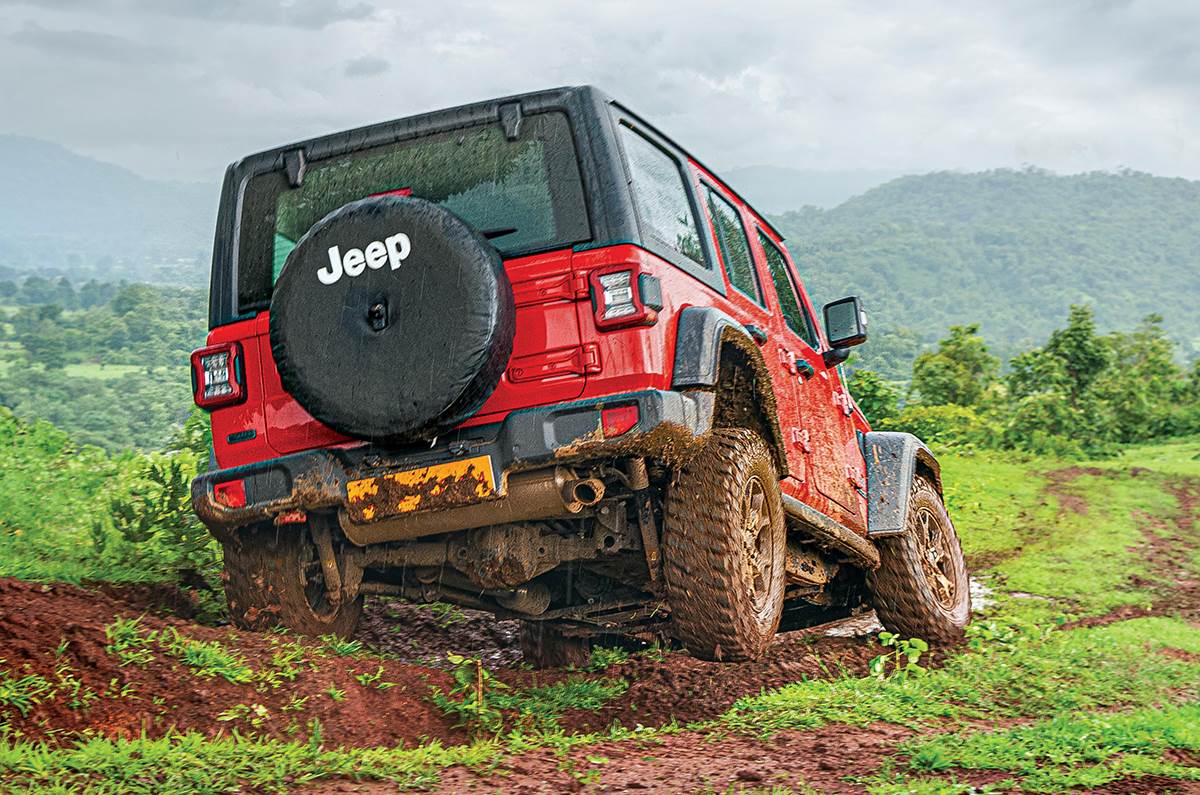 You really have to do something stupid to get stuck in a Wrangler.

It’s astonishing the way the Wrangler simply ploughs through everything. Deep, water-filled ditches and even-deeper furrows that test wheel articulation to the max proved hilariously easy for the Rubicon. I did have a moment of panic scrabbling up a steep muddy hill and could feel those massive BF Goodrich all-terrain tyres getting bogged down but, thankfully, I still had some ammo left in the Wrangler’s massive arsenal. Locking both the diffs and selecting low-range was all that was needed to extricate the Wrangler from axle-deep mud and that too whilst going uphill. Amazing! 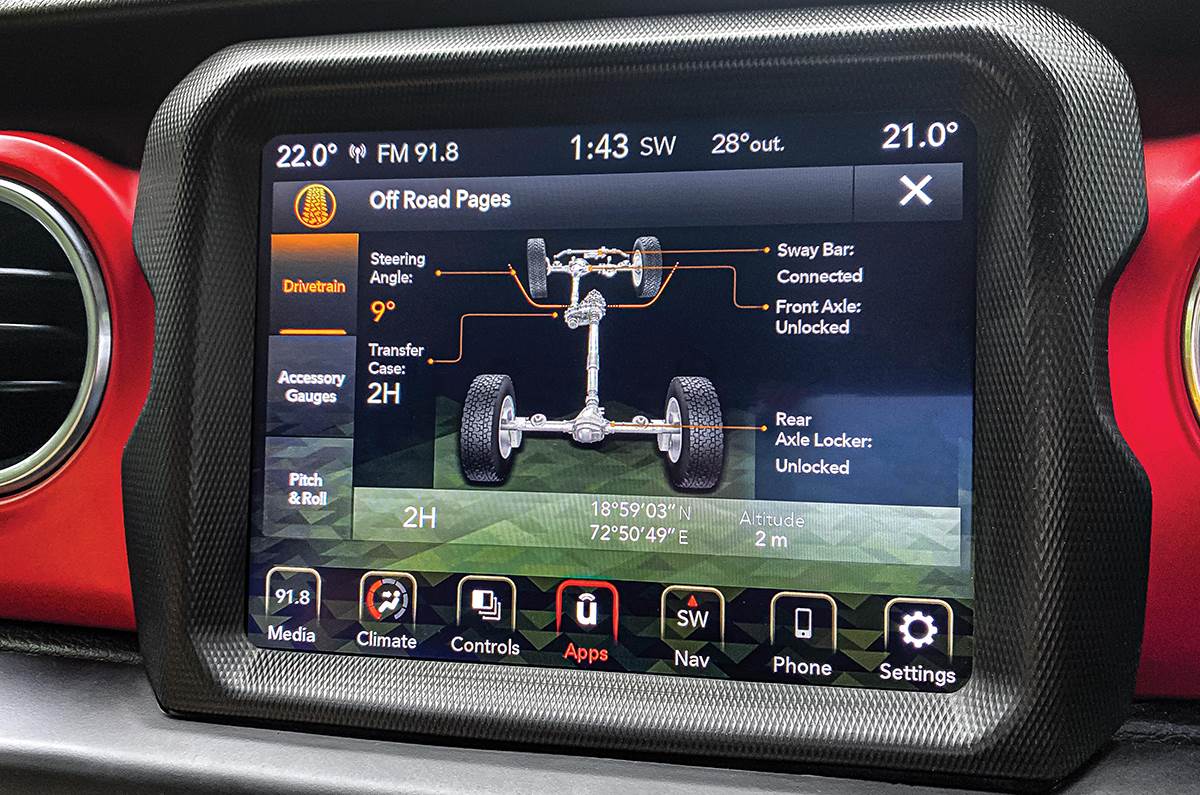 Geeks will love all the 4×4 info on display.

What also amazed me is the small 2.0 turbo-petrol which was well up to the job of hauling this near-two-tonne beast over obstacles.

You would expect the Wrangler to have something like a low-revving, large-displacement and torquey V8 to pull you out of a muddy field, but this four-cylinder engine with 400Nm of torque mated to an 8-speed auto never felt out of its depth. Sure, the low ratios and torque converter are calibrated to make most of the available torque, which certainly helped, but it’s nice to see that engine downsizing hasn’t affected the Wrangler’s off-road prowess. 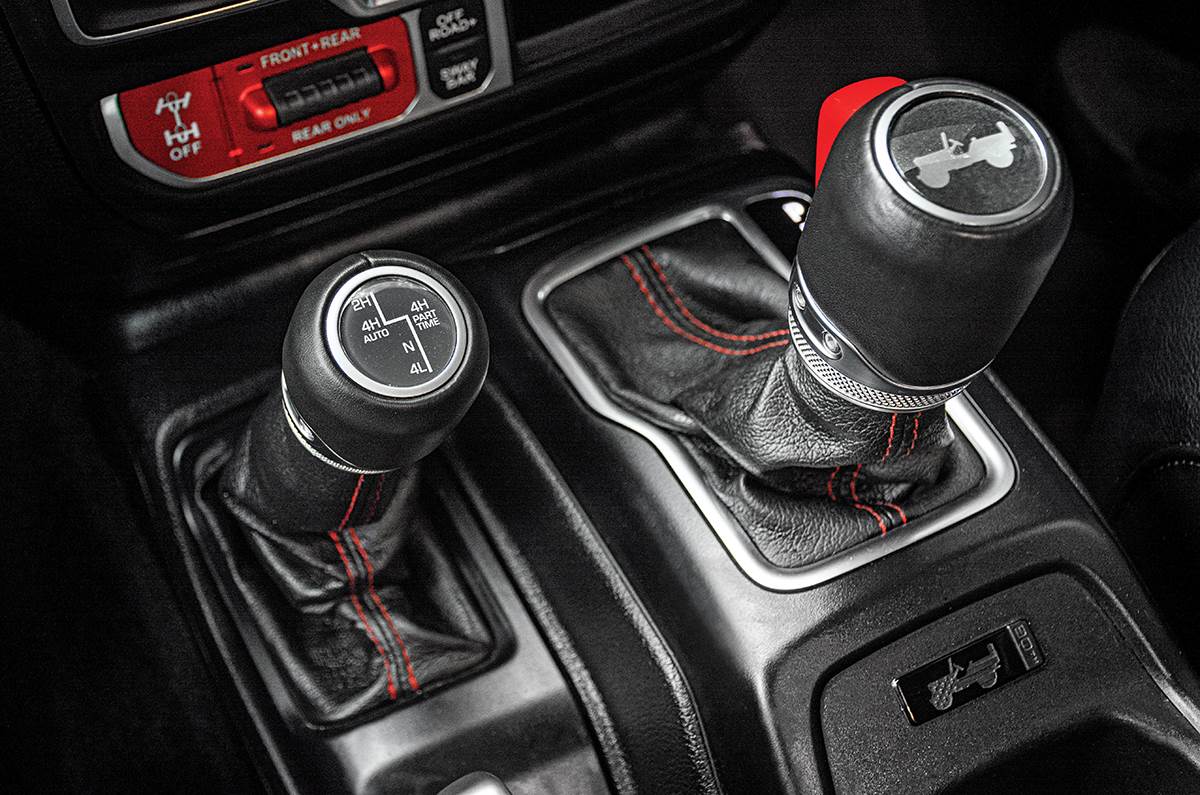 What’s it like on-road? After all, to get from one dirt track to another, you can’t escape long stints on tarmac. The Wrangler is as adept on the highway as someone going for a jog in gumboots. Make no mistake, this is not a car you buy for highway cruising. The choppy ride on those solid axles, the roar from the all-terrain tyres and the utilitarian interior don’t make it as comfortable as, say, the Land Rover Defender. Yes, you can hold a steady cruise all day but the unrefined dynamics make you work a bit harder over longer distances than you would like. At the same time, it hammers bad roads into submission, gives you a feeling of invincibility like few other SUVs do and works well as your choice of ride in a world of natural calamities that Mother Nature, overfed with carbon dioxide, is angrily throwing at us. Wading through floods, traversing collapsed roads and dodging mile-long jams by merely cutting through a field gives you a unique sense of reassurance.

Have It, Flaunt It

But would you buy a Wrangler just for that 0.001 percent chance of being stuck in a disaster? No. Would you buy it only for what it’s designed to do, which is climb Mt Everest? No. Would you want it just because it can achieve these aforementioned feats? Yes, and it’s this invincible image, which is an intrinsic part of the Wrangler’s desirability, that you flaunt like a lifestyle accessory. 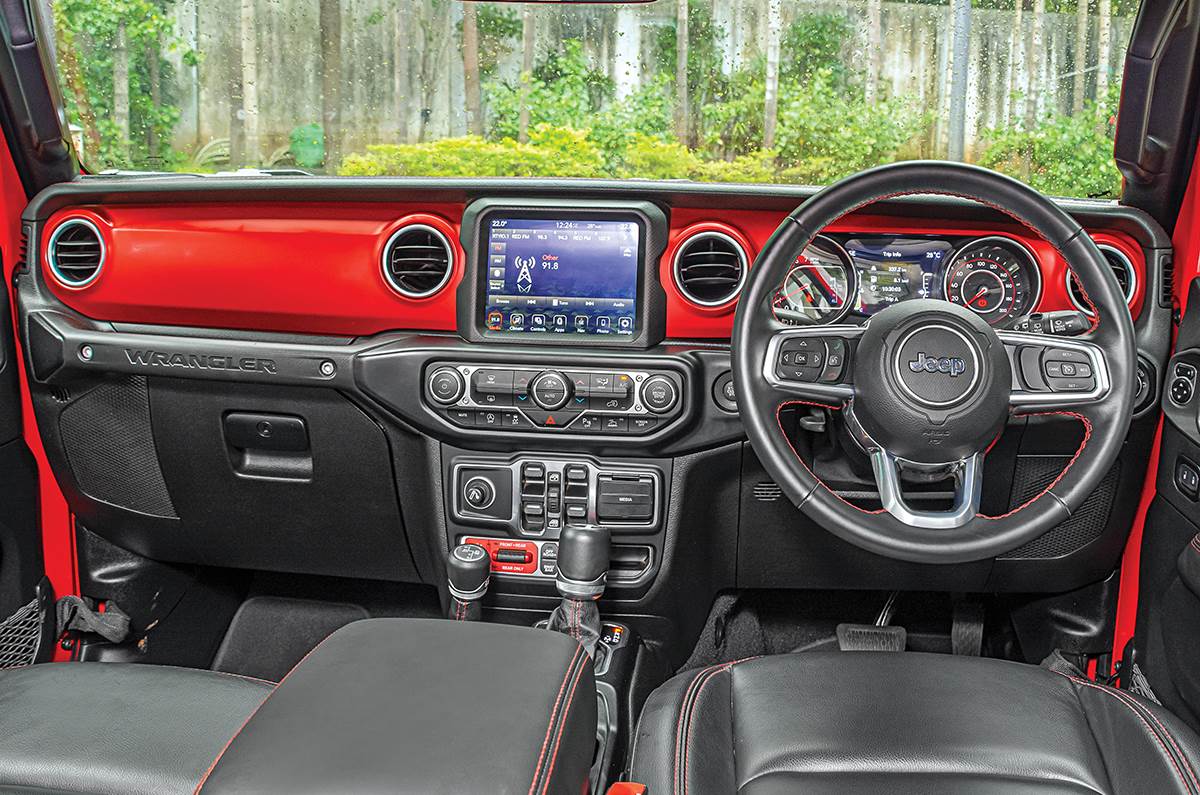 Functional interior reflects the hard-as-nails character of the Wrangler.

Jeep knows only too well that a large proportion of its customers are showboaters, which is why it gets a fairly well-equipped cabin, which includes the mandatory touchscreen packed with lots of 4×4 info for off-road geeks, niceties like Apple CarPlay and Android Auto, fairly comfy seats and enough luggage space to ferry a family to the edge of the Earth. And the good thing is, it doesn’t cost the Earth, so if you want something that embodies the outdoor spirit like no other SUV does and is as ‘Jeep’ as it gets (the design is a faithful expression of its WWII lineage) the Wrangler has a very special appeal.