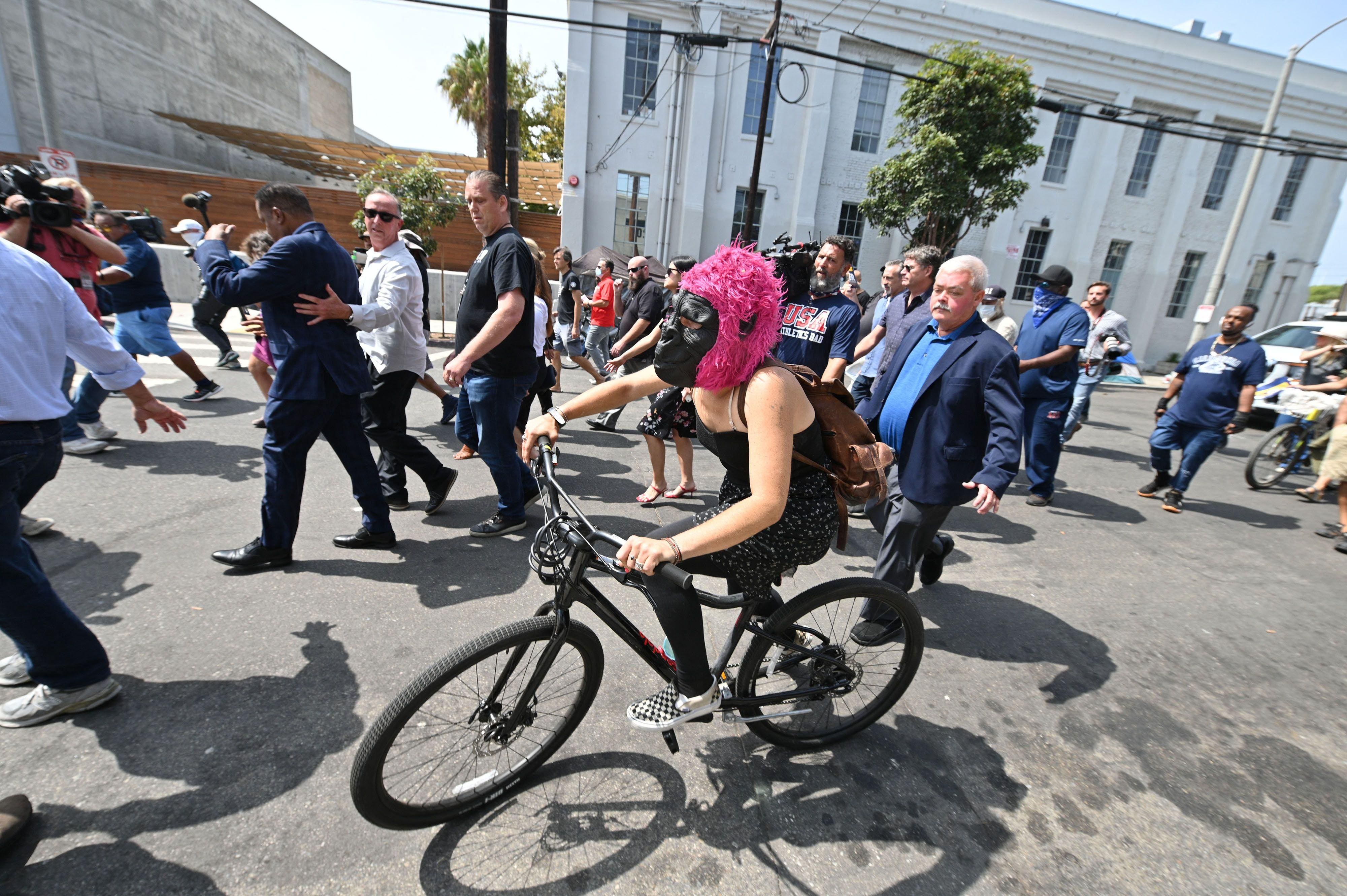 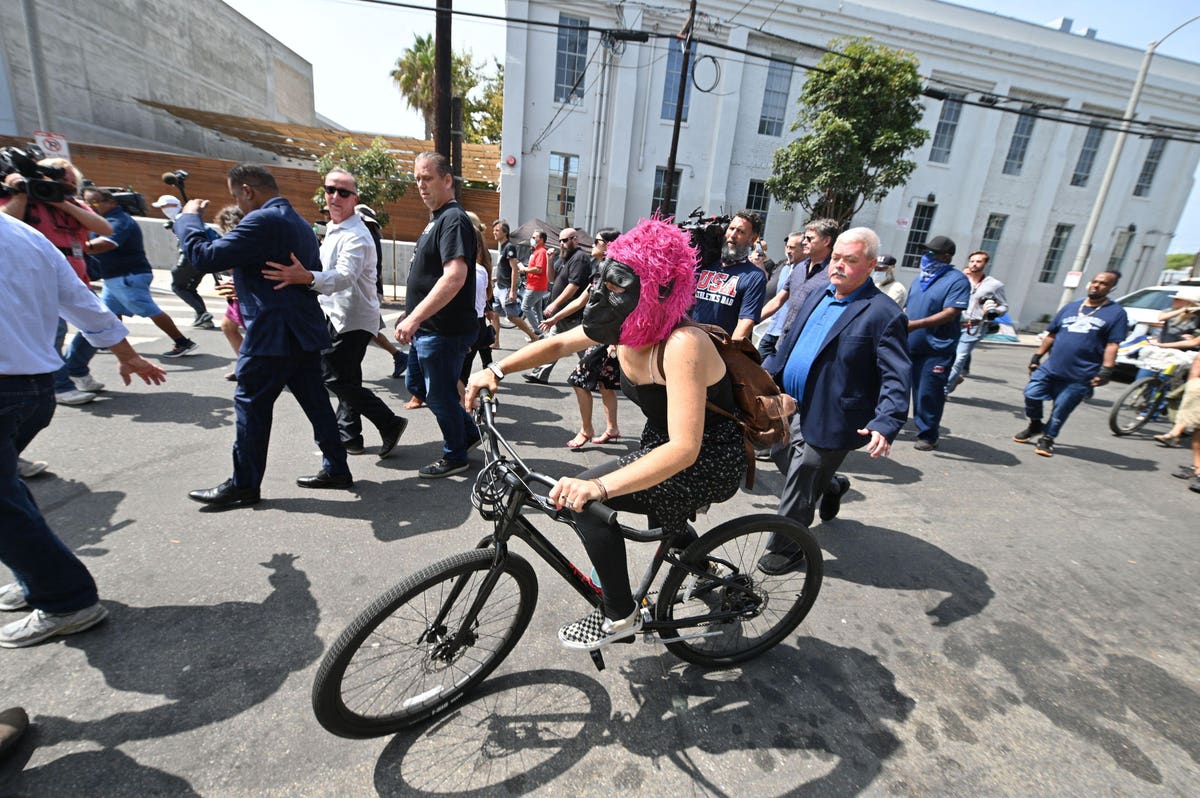 On Wednesday, California gubernatorial candidate Larry Elder made a scheduled tour of a homeless encampment in Venice, but nothing went as scheduled. Shortly after arriving, the leading Republican in the highly contested and even controversial recall election was forced to make a hasty exit in an SUV after being violently confronted by protestors.

Elder, who had arrived in his “Recall Express” campaign bus and is leading in the polls among the 46 candidates running to replace Gov. Gavin Newsom, spent just 12 minutes in the neighborhood before protestors threw eggs in the candidate’s direction and made physical assaults on his staff. A woman in a gorilla mask riding a bicycle could be seen throwing small white objects in a video that was first posted to Twitter by Spectrum News reporter Kate Cagle (@KateCagle). The Los Angeles Times reported, “The woman appeared to be white, Elder is Black, and ape characterizations have been used as a racist trope for centuries. Moments later, the woman took a swing at a man who appeared to be part of Elder’s team. The man was hit by at least one other heckler just before Elder was escorted into the SUV.”

The video was seen some 3.1 million times by Thursday afternoon, and other footage of the incident has been circulating across Twitter. There have been more than 160,000 tweets related to the incident.

Larry Elder took to Twitter from his official account (@larryelder) late Wednesday to post, “Today I kicked off the Recall Express bus tour. Before we even left Los Angeles, my security detail was physically assaulted, shot with a pellet gun, and hit with projectiles. The intolerant left will not stop us. We will recall Gavin Newsom. We will save California.”

Such confrontational moments between supporters of political rivals aren’t exactly new – and unfortunately have long been a part of our democratic process. What has changed is that, thanks to smartphones and social media, every ugly event can be posted and shared online. Also unique among this one is the fact that it was one of the candidates who directly attacks.

In addition to the mainstream media coverage of the assault on Mr. Elder, social media has taken what was a local news story and put it on the world stage. The question is how such behavior can impact next Tuesday’s election?

“Look at Donald Trump for evidence. It can also lose you elections,” added Petersen. “The violent attack on Elder will have an impact on the outcome of the election. Groups always get blamed for the behavior of the worst of the people who show up. That was true during the Tea Party and Occupy Wall Street years, and it’s true to this day. If Larry Elder becomes the Governor of California, it will be in large part due to this attack.”

However, this being a recall could have a smaller but more motivated turnout. The video, even with all its views, may not move the needle all that much.

“The majority of the voters in California may have already made up their mind,” said Chris Haynes, associate professor of Political Science and National Security at the University of New Haven.

“This is a special election, and those who will turn out are very motivated. You don’t have a lot of undecided voters,” added Haynes. “The viral video could be a flash in the pan, but in a general election where the race is very tight it could certainly sway some voters.”

Our Uncivil War And The Media

What the video really highlights is that hope for unity isn’t close to happening, and the sharing of the video to the masses will likely further inflame the issue.

“This serves to remind voters that many rallies have been quite uncivil,” said Haynes. “It isn’t good for our democracy to throw eggs and swear at our candidates. And social media has the ability to amplify these moments. This is yet another example of how polarized the country has become.”

Social media is taking this further because it isn’t filtering out anything, but it is also providing little context. Instead as Cagle’s video noted, it was the “raw story” because it was all unedited. Now it could change the way elections occur as a result.

“Electioneering and campaigns have always been based around the affordance of communication media,” said Dr. Aram Sinnreich, professor in the school of communication at American University.

“There are things that can be used as influence by the political actor, and not just the candidate in this case but the person in the gorilla mask throwing eggs,” said Sinnreich. “This can influence our voting behaviors. Media has always played a role in elections – it was true when it was hand printed pamphlets at the time of the revolution or when newspapers offered opinions on a candidate during the Civil War, and then radio during the First World War and TV with Vietnam. The media was shaping the message to the audience.”

Now it is social media.

“What is different is that social media is essentially affective politics, which encourages emotionally with content and that kind of message can spur emotion reaction,” added Sinnreich. “No longer is it about convincing the gate keeper at the TV station which stories to cover, but now it is convincing millions to hit retweet or share.”