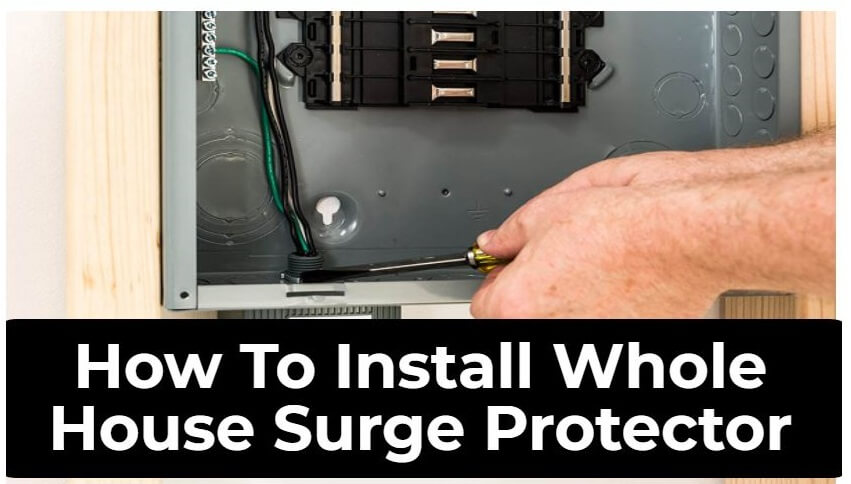 A power surge is capable of threatening the normal functioning of your machines like televisions, fax, telephones, satellite systems, modems, and computers. So pretty much all of the electronic appliances come in this category. A whole-house surge protector is capable of taming the beast of power surge and it also makes sure the appliances at the other end remain safe and sound without inferring any damage.

This system protects all your electronic devices and appliances plugged into different electric outlets in your household at different places all at once. For the peace of mind against the uninvited power surge a house surge protector is a must, mainly if your house is in a region that experiences frequent storms.

What Is a Power Surge?

House surge protectors are mainly installed to protect the house from unexpected lightning strikes or maybe sometimes the downed power lines. A power surge doesn’t discriminate between your home appliances, it may follow any cable and threaten the normal functioning of any household appliance.

Most people live in a mirage that connecting their devices in a low-cost surge protector that also has multi outlets (power strips) is going to save their respective devices against the power surges! But unfortunately, that’s not how things work against the surges. True protection comes from the primary electrical panel that sits in your house which must have hard-wired protection installed by a certified electrician.

Even if the lightning doesn’t strike on or around your house the power surge holds the capacity to travel miles through the power lines and strike your house during the storm. A subtler reason for the power surge can even be the appliance of your house that escalates its power usage by malfunctioning on a good weather day.

What Is a Surge Protector?

A surge protector is not the power strip where multiple devices are connected into it but it is a more sophisticated and safer system. The surge protector is installed at the main electrical panel in your house where it almost acts like a pressure release valve. It allows the electric current to flow through it but once a power surge is detected it diverts the excess voltage instead to the ground wire which acts as a diversion on behalf of your expensive electronic devices.

A good surge protector has a reaction time of less than a nanosecond. Once the voltage returns to the normal limits the surge protector restores the electric current to the appliances however, sometimes a powerful surge induced by lightning may even cause the fuses, lights, or alarms in the very protector to get damaged or melt which should be replaced or at least checked for damage after every power surge.

How Does a House Surge Protector Functions?

A surge protector basically works at two levels. Firstly, it guards the household against the big guy which is none other than the power strikes, and secondly, it looks after the normal functioning of the household appliances that are connected to the individual circuits.

A typical whole-home surge protector/suppressor is connected to the service panel by a licensed electrician which in turn takes him about two hours. The surge protector system is expected to diminish the effect of a 40,000-amp surge.

However, the whole house surge protectors cannot completely put an end to the surges completely as around 15% of surge current may leak but then that’s where ‘plug in’ surge protectors come into use. These things vary in terms of pricing, quality, plug points and sizes.

How to Set-Up a Whole Home Surge Protector

Before we begin, it is always recommended to get this job done with the help of a certified electrician as interference with the primary power box of your house may be quite dangerous. But if you are someone who has done jobs like these in the past and know well about the things included to carry out the job then. Here are a few essential tools that may be needed for you to install and set-up a whole-home surge protector:

Step 1. Shutting off the power

Locate the main electrical box in your household and flip the primary breaker switch off for carrying out the work safely. Perform this before you proceed to open the electrical box and start the operation. Using a voltage finder is recommended to see whether the panel is completely de-energized as there can still be live cables even after the power is cut off. Once the lid is open then look out for a circular knockout. You can slightly push the guard back and mount your surge protector there.

Once a sufficient sized opening is available for the surge protector you can then proceed to put through its wires through the opening. Remember to keep these wires separate by looping them out initially to make the further process of connecting them easier.

You have the freedom to mount the surge protector either outside or inside the panel casing and if you ask us, we recommend you to mount these things on the outside since they have a limited lifespan and may need replacing after a high surge charge which although rarely happens.

To link the surge protector wire you will have to strip and remove the plastic coating at first to reveal the inner conductive wiring which will be connected to the part of the stripper that says ’14 AWG’ to ensure that scarring of the cable does not take place.

Step 4. Change the cover of the panel and test

Once everything seems to be in the right place now you can proceed to change the cover of the panel and the main screws. Make sure you do not flip the power breaker yet. Once the panel is fixed make sure it is firm and all the screws are properly fastened and now you can flip the main power breaker on.

Now, switch the dipole breaker switch, which is connected to the black wires and confirm the lights on the display of the main box and side by side verify its working with your user’s manual and if it does work properly then, that’s it, you have done a great job.

Lightning accompanied by the storms is unpredictable like one of your electrical appliances going haywire and anyhow these all can lead to power surges. A whole-house surge protector benefits you by:

At this point, we all know how destructive the power surges can be mainly the ones caused due to lightning and how far these things can travel. Having a whole surge protective unit can give you and your family peace of mind that at least your electronics won’t get affected if there’s any surge running around the wires.