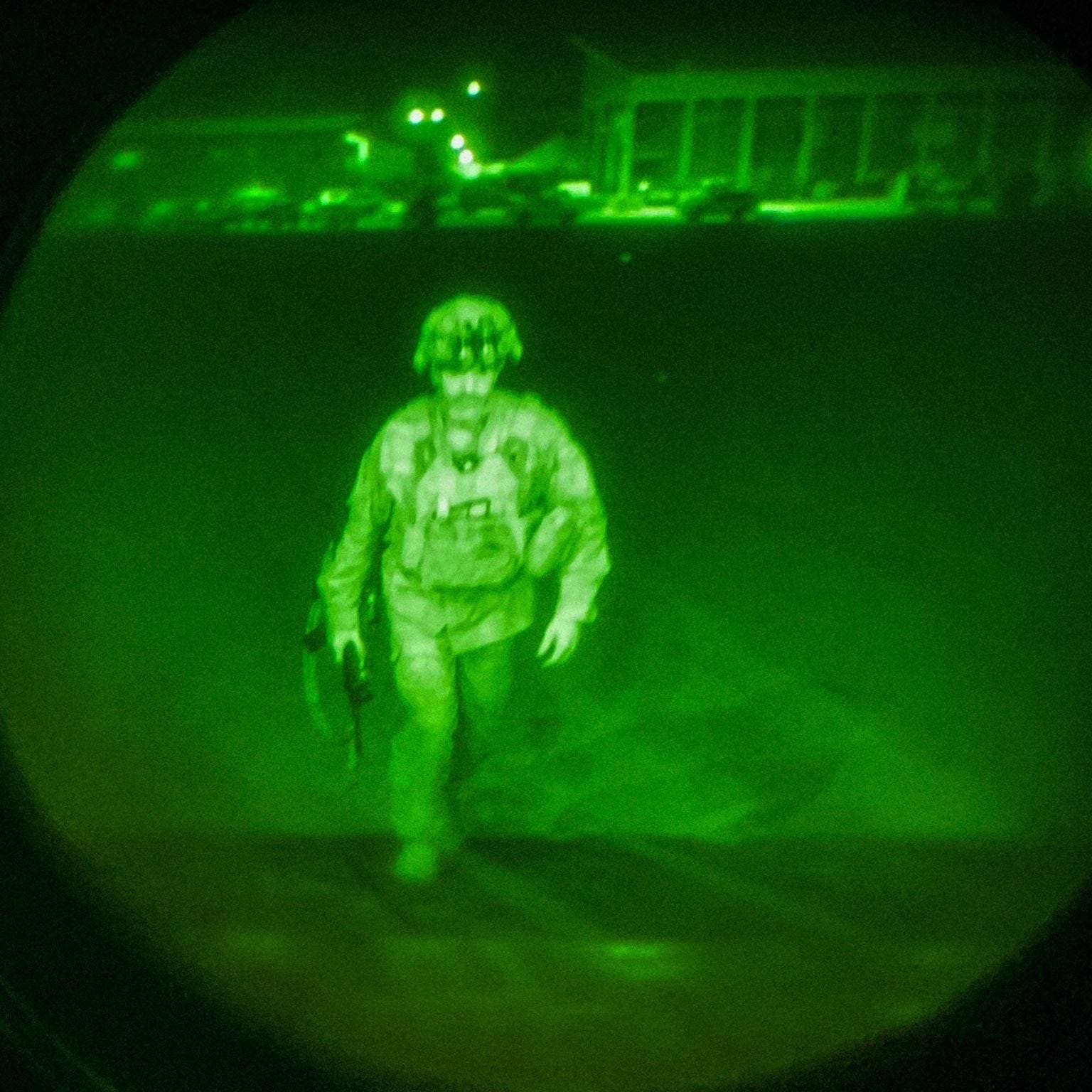 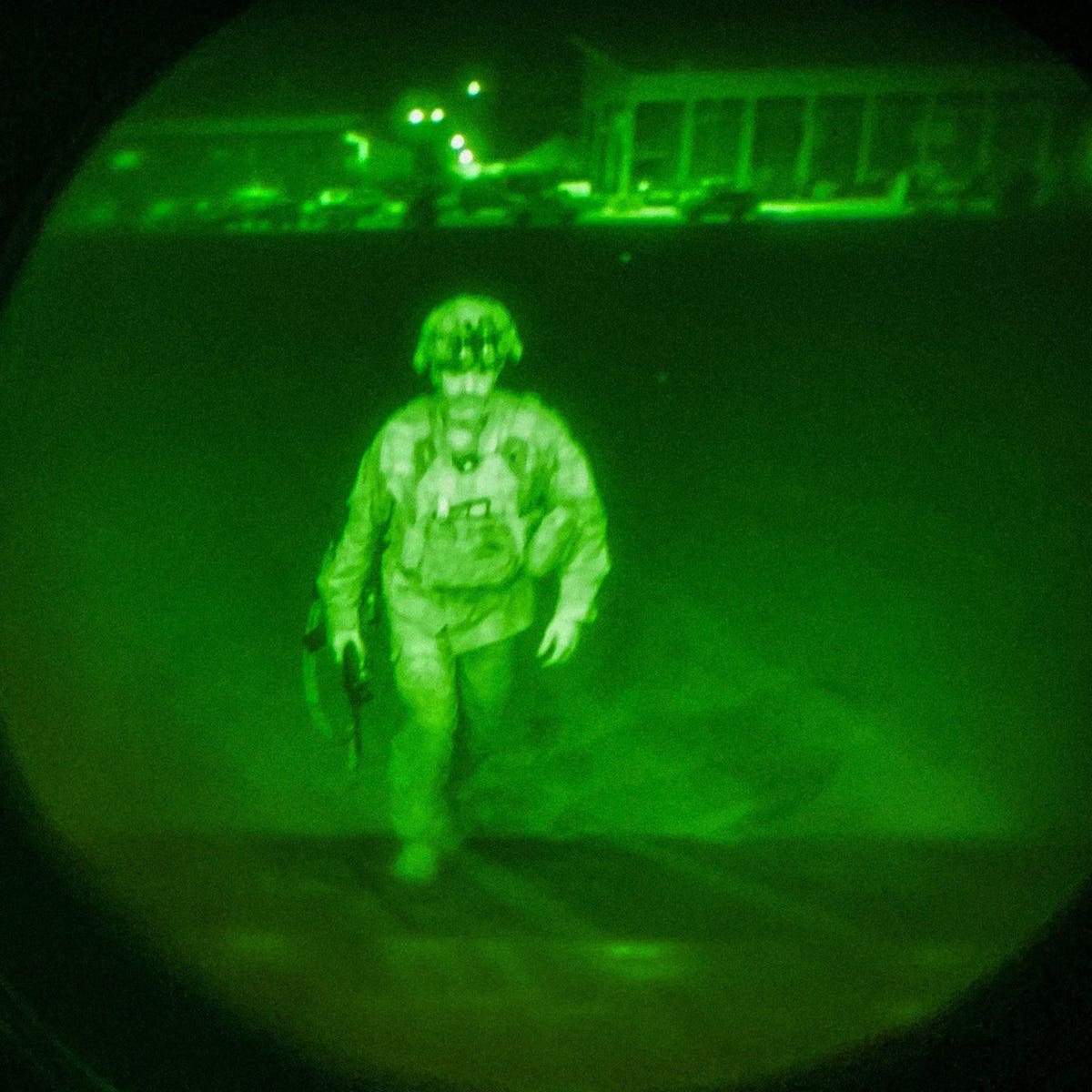 That photo of Maj. Gen. Donahue, who was commander of the Combined Joint Special Operations Task Force-Afghanistan before taking command of the 82nd Airborne Division last year, was shared by the official social media of the Department of Defense (@DeptofDefense) on Monday evening.

It had been retweeted more than 13,000 times by Tuesday afternoon and had nearly 60,000 likes. Reactions to the image varied, but most noted it marked the end of a conflict that began nearly 20 years ago.

“When you see that image, it does make every Afghanistan veteran take a step back and say ‘wow, it’s the end. It’s actually over. We’re officially a part of history,'” explained Andrew Biggio, author of The Rifle: Combat Stories from America’s Last WWII Veterans, Told Through an M1 Garand and founder of Boston Wounded Vets Run.

“At the same time the photo comes with controversy because it just simply wasn’t a clean exit,” said Biggio. “It wasn’t the exit we all hoped for. In a way, you get sentimental thinking of the last solider stepping off the plane but then you go back on social media and start seeing all the controversy behind the image and headlines reading , ‘The Taliban have taken over the country,’ ‘The Taliban are doing revenge killings,’ and ‘The Taliban have our weapons.'”

In many ways it is a double edged sword, said Biggio.

“You feel good about it and then it’s a gut punch to go back on social media to see the enemy, which you dedicated your youth to fighting, claiming victory – when they were nowhere to be found over there in the combat zone. Now they’re coming out and claiming complete victory,” he added. “Unfortunately, it’s a little bit of a mind twist. I saw the photo for what it’s worth, it’s humbling to see the end of an era and get the men and women home. But it was just not outcome I hoped for.”

Perhaps not as profound as the U.S. Marines raising the American flag over Iwo Jima, or the kissing couple in Times Square on VJ Day, the photo of Maj. Gen. Donahue certainly serves as a bookend to the war in Afghanistan.

“You can’t help but think that this is a political message coming from the Biden Administration,” explained Chris Haynes, associate professor of political science and national security at the University of New Haven.

“This is something President Biden wanted for a long, long time – to leave Afghanistan,” Haynes told this reporter. “Even last week, when things were going downhill, Biden and his representatives were framing the U.S. withdrawal as ‘the American people wanted out,’ and this image is a testament to that resolve. Even if they had to reframe the withdrawal as the situation became a bit more chaotic, there was the commitment, ‘You wanted out, we’re out.'”

The image captured by a photographer with a night vision scope should also be seen as noteworthy, said Haynes.

“It suggests that the U.S. is not exiting Afghanistan on its own terms. We can’t say we won the war overall – there are things that we accomplished, but a lot that we definitely didn’t accomplish or even failed,” he added. “The last soldier leaving late at night sends a very strong message. If we were truly proud of what we had accomplished, we’d have left in the light of day.”

How the image is seen in the years to come may change and evolve, but here was a case where the DoD actually took the time the ensure the moment of the last soldier – a general, an officer, to be clear – leaving was not only captured for future consideration and evaluation, but it was instantly shared to the world.

The war in Afghanistan began before Twitter existed, and when social media was still in its early stages of evolution. But it very much ended with a true social media moment.

“This is because social media is so instantaneous,” said Haynes. “The DoD used the immediacy of social media to frame the image the way they wanted it to be framed. In that way it does still send a mixed message. Perhaps they missed an opportunity.”

What such an opportunity could have been isn’t clear, given the dire situation at the Kabul airport. But it certainly wasn’t the same as seeing the British Union flag lowered for the last time in Hong Kong, or the final lowering of the Soviet Union flag in Moscow. Instead, the indelible image of the end of the War in Afghanistan is the lone soldier – and again, a general officer – boarding the last plane out.

“This image will forever be the end of the war,” said Haynes. “We can’t say we won the war, and that image makes that fact clear.”