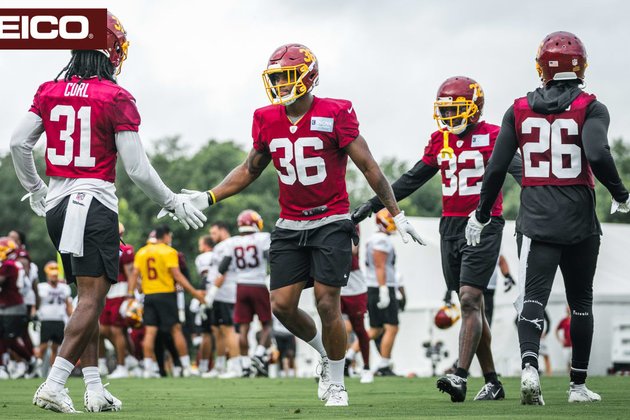 The Washington Football Team is hosting the Baltimore Ravens at FedExField. Here are some of the most memorable quotes from the week of preparation, as compiled by washingtonFootball.com, presented by GEICO.

“Yeah, we like our group. Kam has shown his worth as a super intelligent guy that can find his way around our secondary. He can play in the slot, he can play a nickel role. He can play free, he can play strong. He can be in the box, he can be on the edge. I mean, he’s really been very versatile from day one. He’s been super intelligent. It was a good communicator, a good football player. So, we like the group. Adding Bobby gives us a true free safety. Ball hawking free safety kind of guy. He’s made a lot of plays in the camp. He’s going to make a lot of plays for us this year.”

Landon Collins on his advice to Jamin Davis:

“I just tell him to breathe. I tell all my rookies just to breathe and just control what you can control and just do your job. Just study what you can and just do your job because you try to think too much and go in with a full plate and not just going out with a calm mind, ‘alright this play, alright turn the page this play. Because if you’re like ‘alright damn, I messed up on this play.’ It’s going to eat at you and it’s going to mess up on the next. So just the page, breathe each and every down and just continue to play.”

“Yeah, I’ve known Jaret since eighth grade, so I know what type of work he is, type of person he is. All I know is that he was a dude who coaches were going to be able to count on. No off the field issues, showing up on time, just going to come to work every day. I feel like he’s been showing that, I felt like he’s being proving that. I just tell everybody, ‘y’all just seeing stuff that I already know.’ When he’s cooking dudes, shaking dudes, I already knew that was going to happen. You see what he did at Buffalo. I’m definitely excited for big Jaret.”

Ron Rivera on what has impressed him about Dax Milne:

“Well, first off when we watched him coming out of college, he caught a lot of footballs. He did a lot of things for BYU, so we know he’s a quality football player. He got here and it wasn’t too big for him. That was one of the first things that stood out. Secondly, is he’s very competitive. He competes all the time. He’s a very bright, smart football player and he’s got a skillset that suits us very well. So we’re very intrigued by who he is as a football player.”

Ryan Fitzpatrick on how much growth there is for him to achieve:

“It’s just a constant process everyday just going out there and doing it. And I think the preseason games are good and that there’s not a whole lot of preparation. You go in there; you see some different looks than what you’ve been seeing throughout training camp. And it just, you put that one away, file it away, missed it for whatever reason and you move on. I’ve missed plenty of throws my career. I’m sure that wasn’t going to be the last one. But you you’d like to find out the why. Was it just a bad throw, was it a technique, was he not in the place I thought he was going to be, and you kind of go from there and you just work it out.”

“Yeah, absolutely. He teaches everybody the same way. Now he may push people a little harder who need pushing. He might yell at some person a little bit more. He might just talk. I’m a type of guy that you can just talk to me and I understand it, but he knows sometimes when you’re kicking the butt, they’ll do it. He understands his players and how to get through his players. And that’s the thing that separates them.”

Ron Rivera on what he likes about Ereck Flowers Sr.:

“He’s a very big man. He’s a big physical presence at left guard. Big physical presence and that’s one of the things that you really see that stands out about him. He’s a lot to get by. He’s very athletic and moves very well. He’s got good arm length. Those are the types of things that really kind of stand out when you watch him and watch the way he plays.”

“Just being able to give different looks. We line up in certain personnel, we line up with a certain look and have three, four play calls off of that same look. So you’re keeping an offense on their toes. Just like we got to slow down and think sometimes, we want to be able to slow them down, make them think, slow them down and stuff like that. So being able to have a bunch of different looks with the same look is going to be big for us.”

Ron Rivera on if he knows going into this last game certain players that are playing for roster spots:

“There are a good host of them that this game is important for. You look at it as some guys played well last week, you want to see if they followed it up. Some guys didn’t play as well. You want to see if they can bounce back. That’s what you’re looking for is how guys handle success and failure, as part of it, and also how they handled preparation this week. Cause some of them are just going to play a little bit more. So they were tasked with a bit more preparation as we’re going forward.”

“He’s doing great. Obviously coming off the injury from last year, there has been no signs of that. He hasn’t missed any time. Practice-wise, he’s growing. I think becoming a father was big for him just his maturity. He’s ready to hit year two running. His job is first and foremost to carry the football, but, he can do a lot of other stuff as well. He will expand that role, but we have other backs talking about J.D. [McKissic] and he’s going to have a role also.”