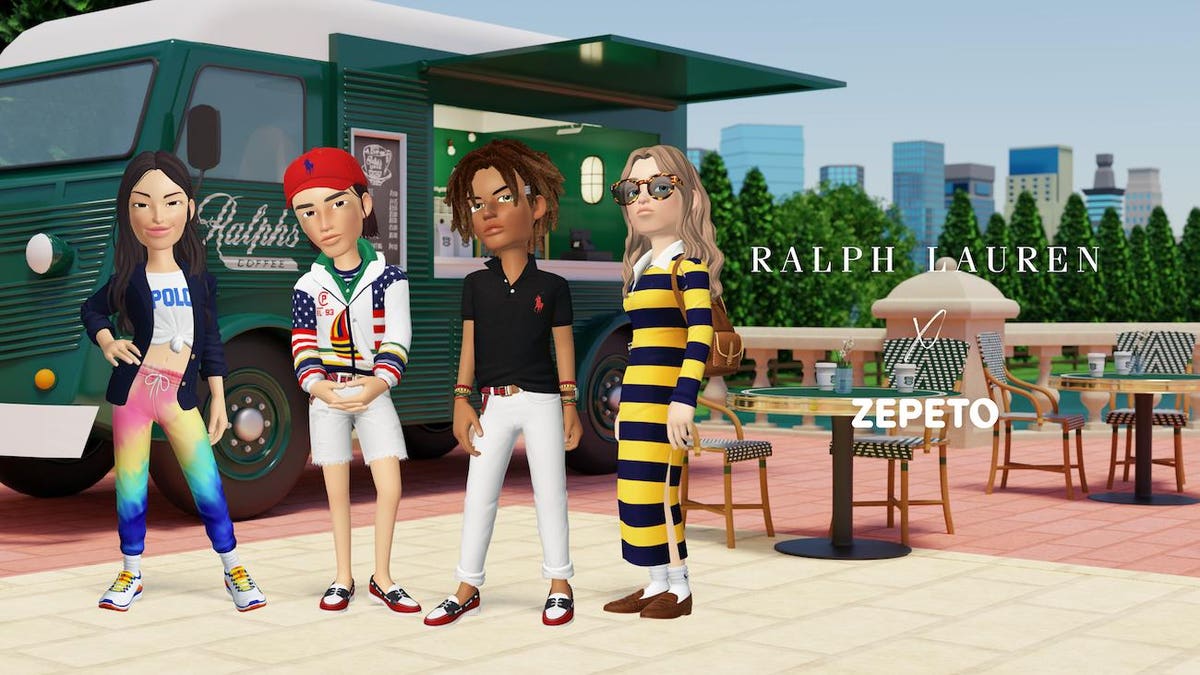 Ralph Lauren is pitching popped collars and sundresses to a new generation of avatars as the iconic clothing brand moves into selling digital apparel inside of the metaverse.

The company has designed a virtual clothing line inside of Zepeto, the South Korean social network and its 200 million users that interact in a virtual world.

The partnership is also Ralph Lauren’s first time selling digital products including 12 looks with 50 unique items ranging from vintage styles to the brand’s summer collection. But instead of shelling out hundreds of dollars for real threads, each piece within Zepeto costs anywhere from 14 to 40 ZEMs—the app’s digital currency—which converts to U.S. dollars as costing between $.57 to $2.86 depending on the item. On the high end are madras shirts and Polo bear sweaters while cheaper products include sunglasses and baseball caps.

Ralph Lauren and Zepeto have also recreated virtual versions of iconic real-life locations from New York City. Along with a virtual version of the company’s flagship Madison Avenue store and a version of Central Park, Ralph Lauren has also created an environment for its Ralph’s Coffee coffee shop brand and accompanying coffee trucks. There will also be a “quest” for users to explore followed by a live virtual concert in September featuring the K-pop ban Tomorrow x Together. During the show, the band, known as TXT, will showcase its avatars wearing Ralph Lauren’s 3D collection while taking virtual selfies with fans that can be shared on social media.

In an interview with Forbes about the partnership, Ralph Lauren Chief Digital Officer and Chief Content Officer Alice Delahunt pointed to Zepeto’s in-app marketplace, which has millions of digital goods available for users. It’s also the largest metaverse in the Asia-Pacific market, which is a “hugely important market for us.”

“Ralph Lauren himself as a man and a designer has always been known for bringing his product to life through worlds,” she said. “And that’s why this is so interesting for us because we literally get to build a world that consumers and users can interact with and sell product to, but we start with the world.”

Zepeto has been increasingly popular with younger generations in South Korea and other Asian countries. The app, founded in 2018, lets people create 3D avatars of themselves based on their photo and various other customizable features. Users then interact with other users through direct messages, news and experiences. According to the research firm SensorTower, Zepeto was downloaded 400,000 times worldwide last month.

Ralph Lauren isn’t the first brand to partner with Zepeto. In February, Gucci began offering a way for users to dress their avatars in clothing from the Italian clothing designers’ House collection while walking through an interactive Gucci Villa. Others clothing brands within the virtual world have included Nike and The North Face, and Hyundai even let users virtually test drive its Sonata N line. Meanwhile, entertainment companies like Disney and Universal Pictures have also built within the platform and former New York City mayoral candidate even virtually campaigned inside back in June.

Marketers have been increasingly interested in building experiences for younger users inside of popular virtual worlds. Back in March, MGA Entertainment created new experiences for its LOL Surprise brand inside of Roblox. A few months later, Havaianas partnered with Fortnite to bring the Brazilian brand’s flip-flops to the wildy popular battle royale video game. And earlier this month, Burberry released its first series of NFTs inside of Blankos Block Party, a blockchain-based open world game that lets players collect unique digital toys.

According to Delahunt, the partnership between Ralph Lauren and Zepeto “demonstrates our belief that innovating in virtual worlds is essential to engaging the next generation of consumers.”

“It’s really exciting to translate our brands across categories because we’ve got apparel, we’ve got home, we’ve got hospitality with Ralph’s Coffee,” she said. “And it unlocks a new design space for creativity and imagination to develop collections and worlds that don’t exist in the physical realm. And for me, that’s where it gets really, really exciting.”

The entrance into Zepeto comes a year after Ralph Lauren collaboration with Snapchat and its Bitmoji collection to let users mix and match outfits on their avatars. Since then, 20 million users have donned their digital characters in Ralph Lauren apparel.

“What we love about Zepeto is the fidelity of the technology once it comes to design. So you notice with our Bitmoji and the rugby shirt, we wanted a French tuck, right? That was really important for us. And it’s all of the nuances that I think the Ralph Lauren brand and Ralph Lauren the man and designer pays a lot of attention to.”

Along with its Bitmoji collaboration, the past two years, Ralph Lauren has partnered with a range of new digital platforms. In November 2020, it launched a new augmented reality feature with Snapchat to let people see the iconic Ralph Lauren pony in their physical environment. That same month, Ralph Lauren opened its first virtual stores so people could buy items through its website. Then this summer, it entered the world of esports by becoming the exclusive outfitter for the gaming team G2 and its star gamer Martin Larsson (otherwise known as “Rekkles”).

The company has “built a very clear strategy in the virtual economy space,” Delahunt said. That includes a a road map with key product launches over the next 18 months. And while some other brands are experimenting with selling NFTs, Ralph Lauren is not announcing any of its own—at least not yet. However, Delahunt said the company is “watching this space so closely” and “we believe in and are invested in the future of digital goods as well as esports and the global virtual economies.”

“I feel like those who exist in digital spend their time investing in newness and what’s cutting edge and what’s ahead because we have to build for the future,” she said. “I am on Zepeto, I’m on Roblox, I take part in OpenSea, I have a Metamask. We’re consumers and users of virtual economies ourselves and lovers of this space.”