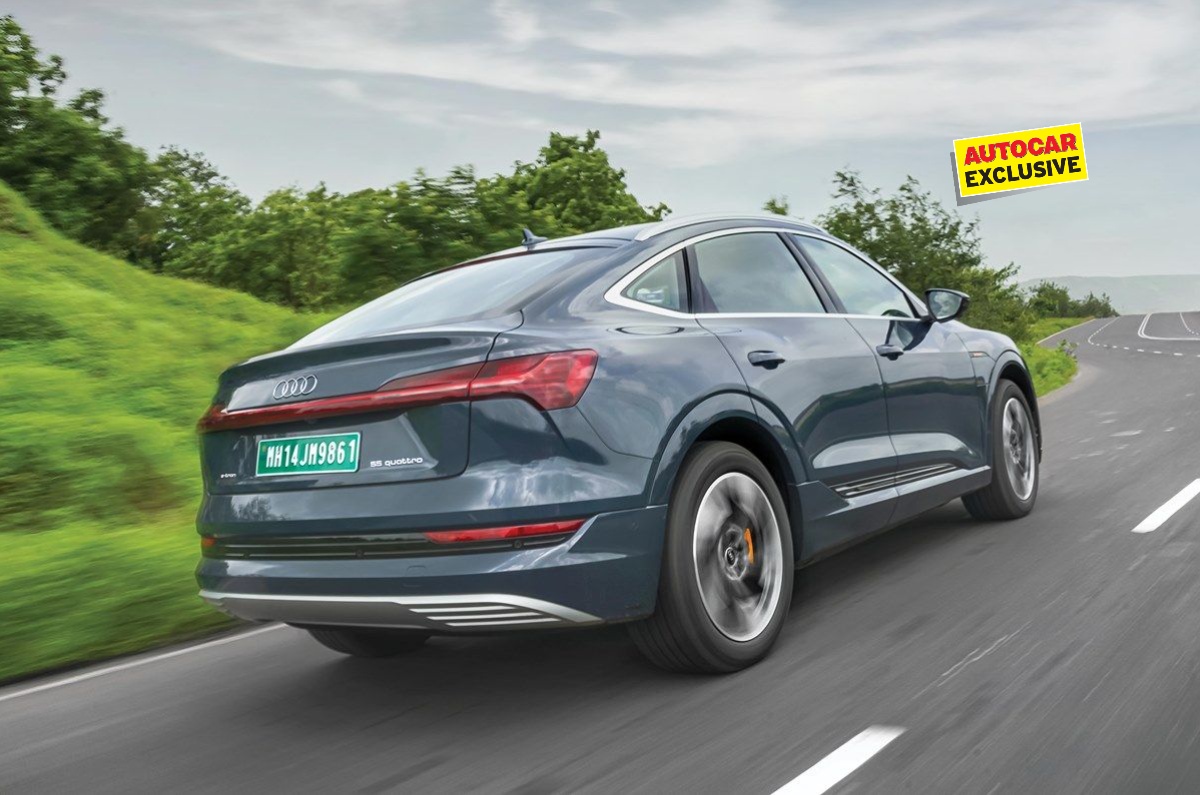 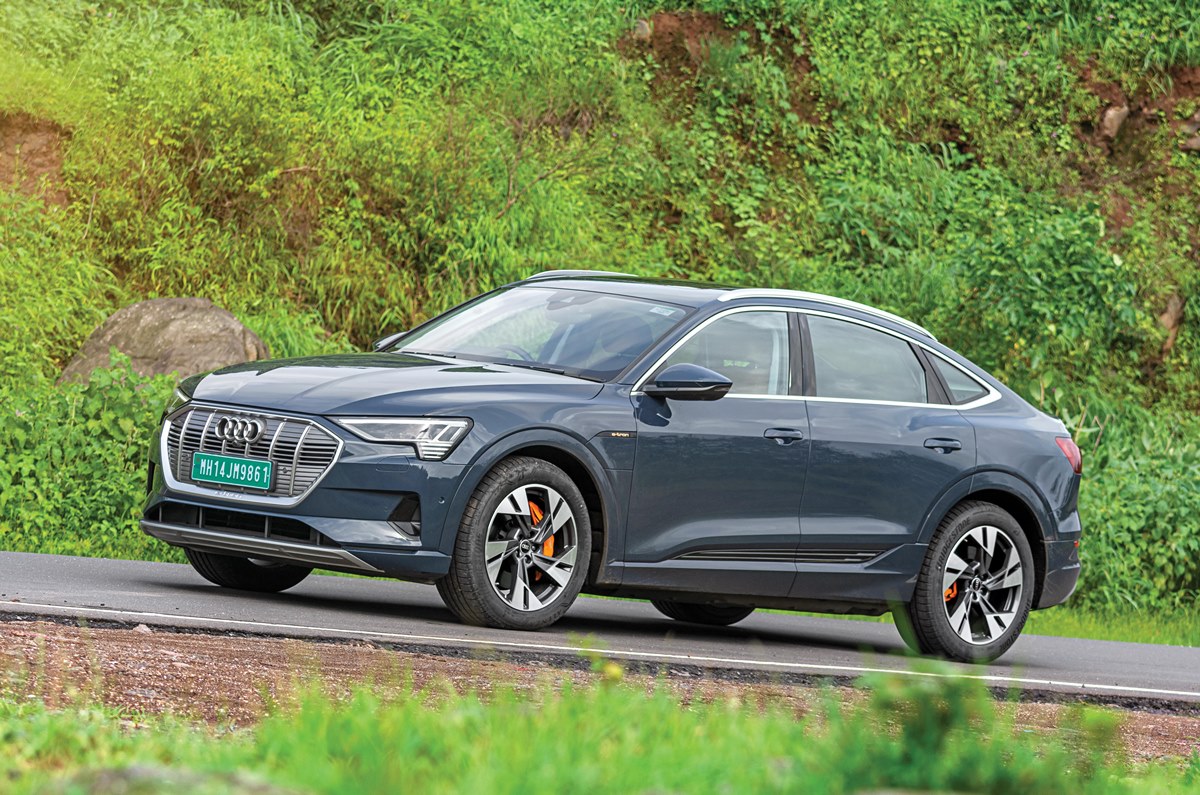 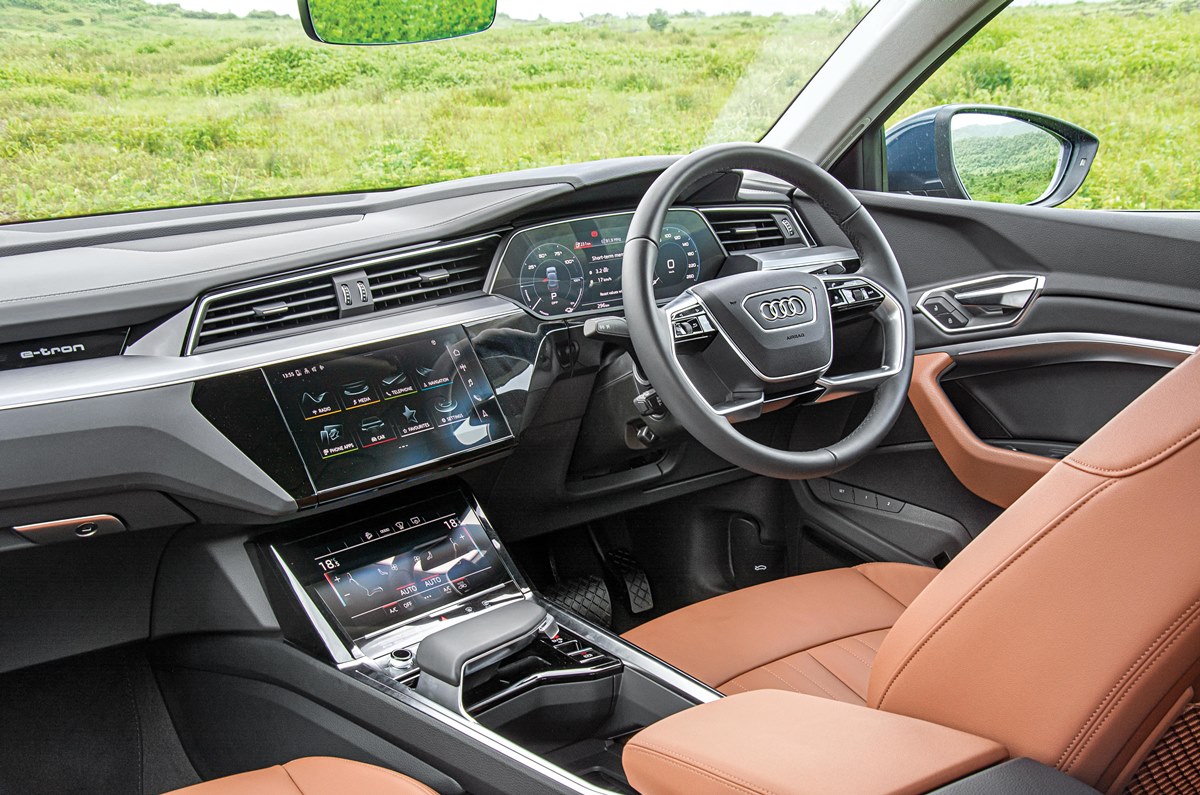 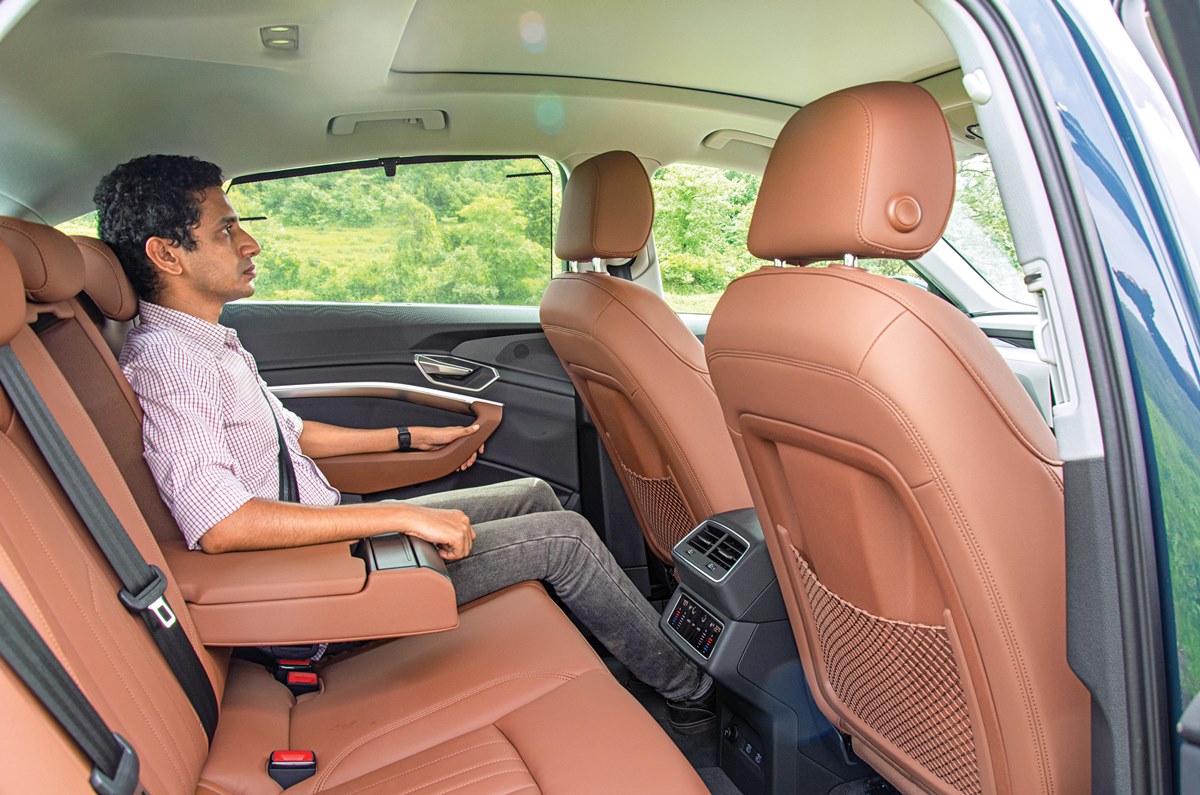 Audi’s own brief for its e-tron electric SUV, right from inception, was that it should feel conventional, so that buyers transitioning from internal combustion would feel at ease. Be that in the way it drives, how its interior looks and feels, or how comfortable it is. That ethos also extended to the way it looks, which is just like any other Audi SUV, but it’s here that perhaps not all customers would be fully sold. An EV, especially here in India and even more so in the luxury segment, is as much about making a statement as it is about saving the environment or living fossil-fuel-free; if you’ve bought one, you want to stand out from the crowd! Luckily, Audi has thought of that and has launched this Sportback variant of the e-tron alongside the standard one.

Ahead of the curve

Sportback, of course, is Audi’s term for ‘four-door coupe’, be that in sedan or SUV form. It translates to a roof line that tapers smoothly all the way to the tail end of the vehicle, making for a far more attention-grabbing form. It’s not just form, however – the roof is lower by 13mm, and this has resulted in a slipperier 0.25cd drag coefficient, compared to the standard e-tron’s 0.27cd.

That said, the front-half of the SUV is unchanged, giving you the same large (albeit largely shuttered off), single-frame grille, sharp-looking 20-inch alloy wheels, slim digital Matrix LED headlamps with their four-slat e-tron signature, and twin charging ports on each of the front fenders. Our test car’s colour – Plasma Blue Metallic – is exclusive to the Sportback, but there’s a wide array of paint shades you can choose from. There are no frameless windows here, like you’d find on Audi’s sedan-based Sportback models, but look past that and the sloping roof truly injects the e-tron with a huge dose of style. 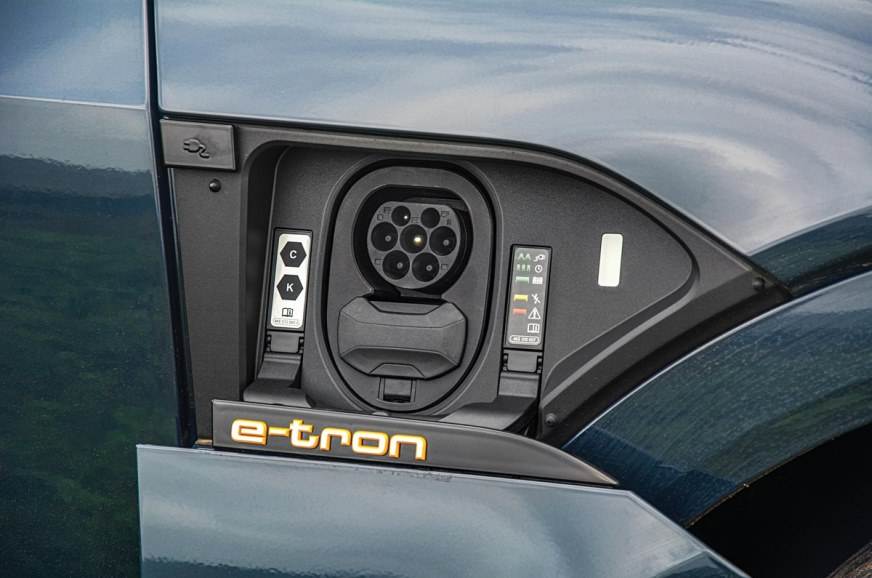 Charging ports on both front flanks.

The roof curves down gently, rather than slamming sharply like in a Q8, and meets the edge of the tailgate with a hint of an integrated spoiler, eschewing the need for one at the roof level. Curiously, there’s no rear wiper, but the rear glass is curved and so heavily raked that water didn’t accumulate there even once on our rain-soaked test days. The now-signature LED tail-lamps joined by a light bar stand out even more on this trimmed-down rear end, and overall, the Sportback look works well with the e-tron’s size and proportions. 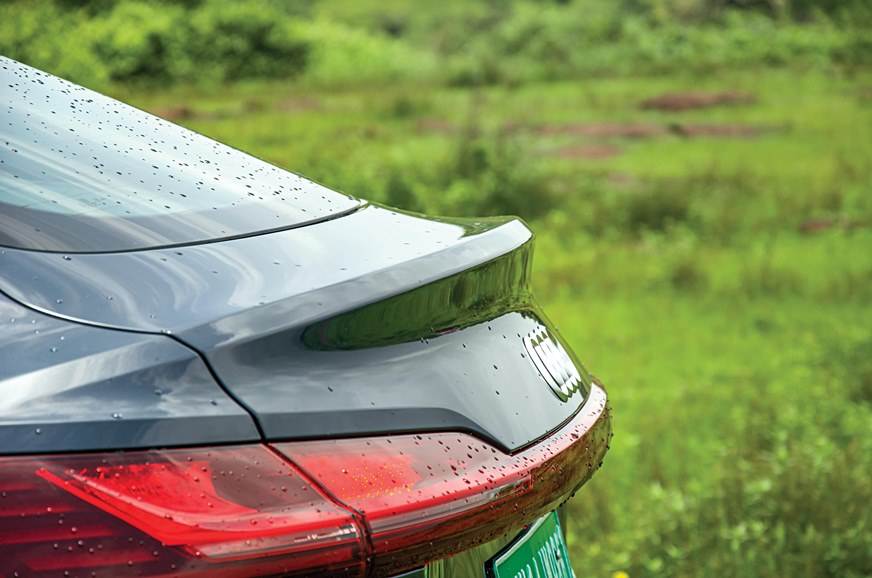 Open the powered tailgate, and though the boot volume has gone down from 660 to 616 litres, you’ll agree that’s still a huge amount, and it will easily take a couple of large suitcases, should you need to do an airport run. And if you’re worried about rear-seat space being compromised, it’s really not that bad. Yes, you don’t get the vast amount of headroom you do in the standard version, but thanks to some clever scoops in the headliner, there is a more-than-comfortable amount, even for tall passengers. Leg room and seat comfort, too, remain generous.

On the equipment front, it’s identical to the e-tron 55, so you’re well catered to, with the likes of adaptive air suspension, Matrix LED headlamps, four-zone climate control, powered steering adjustment, wireless phone charging, dual MMI screens and Virtual Cockpit digital dials. There are, however, some optional extras too, like 360-degree cameras, a head-up display, soft-close doors and a Bang & Olufsen sound system.

Under the skin, the Sportback is the same as the e-tron 55 we road tested last month. That means a 95kWh battery good for a WLTP-rated range of up to 484km, which should translate to about 350km in real-world usage in our conditions. It can be charged at up to 11kW via an AC charger (or 22kW if you option it while ordering your car), and at up to 150kW on a DC charger. At 11kW on the AC wall box charger that comes with the car, we found it took about 8 hours to charge from 10-100 percent.

The steering-paddle-operated, two-stage regeneration system is a fun trick to play with and, at its strongest setting, apart from recouping the maximum energy, can slow the car to a near-halt without you touching the brakes. We just wish there was more real-time data showing the e-tron’s battery level, rate of discharge, key power consuming factors and more, for the driver. This is key information in an EV, especially for new owners with range anxiety, and what you get on the instrument cluster and touchscreen is far too limited and basic.

Twin motors, one on each axle, develop 408hp and 664Nm, deployed to the road, torque-vectored and near-instantaneously, via Audi’s e-quattro AWD system. Performance is brisk when you flatten the accelerator in Dynamic mode, accompanied by a neat, artificially enhanced electric hum in the cabin, and though we didn’t get a chance to test this one, Audi claims it’s just as quick as its more conventional sibling. We did performance-test that version, and it did 0-100kph in 5.58sec. 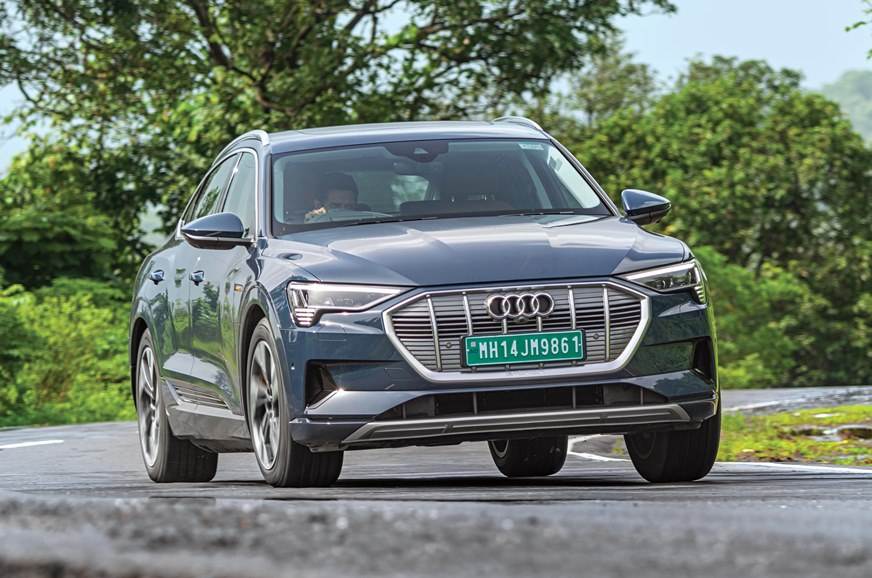 We’re not sure the slightly lowered centre of gravity of this Sportback makes a huge difference on what is a 2.6-tonne, high-riding vehicle, but the e-tron already handled really well for what it is. With the weight concentrated lower down, thanks to the underfloor battery, it shows surprising composure around corners. What’s more, the e-quattro AWD system acts so quickly, it offers grip like no purely mechanical Quattro system can; although, as ever, the steering is nothing to write home about. This could very well be the best-handling Audi SUV that doesn’t wear an RS badge.

Standard air suspension means ride quality is rather good, and the 20-inch wheels even have a pretty generous 50-section profile, keeping shocks from sharp bumps at bay. And though the air springs do let you lift the car so that its underfloor battery pack doesn’t scrape on tall speed breakers, we never found the need to, as the standard ride height provides enough ground clearance. 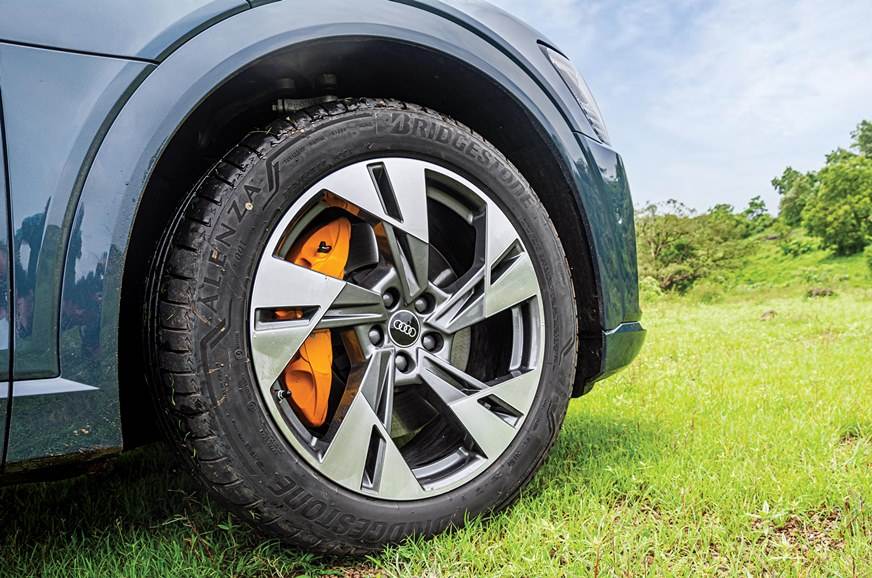 Audi has been rather clever by launching the e-tron in three distinct variants. The entry level e-tron 50 may have a smaller battery, less power and a smaller range, but its attractive price will lure in buyers who want the green credentials and use the car in city confines only. The e-tron 55 we tested last month is the best all-rounder, and this Sportback caps the range off by adding a little more style for those who want to make a statement, with a small penalty to practicality. The best part is, at Rs 1.18 crore (ex-showroom, India) it’s just Rs 2 lakh more expensive than the regular 55 quattro, making it almost entirely an aesthetic decision, and less of a financial one. So yes, if you were enamoured by the e-tron but felt the standard model was just a bit too nondescript, you won’t go wrong choosing the Sportback instead.