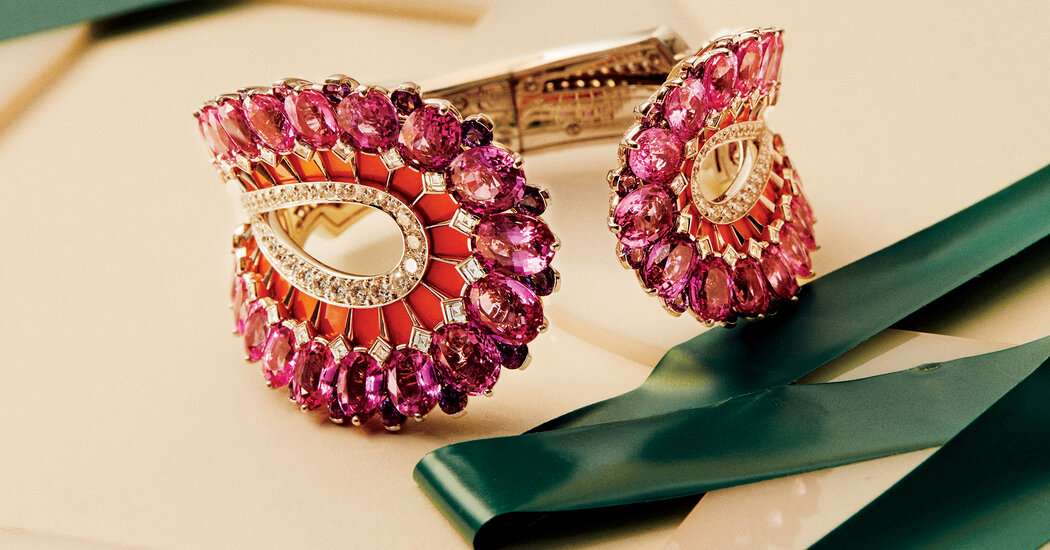 Alfred Van Cleef, the son of a diamond cutter, married Estelle Arpels, the daughter of a precious stones dealer and, about a decade later, in 1906, the house of Van Cleef & Arpels opened its doors on Paris’s Place Vendôme. By the 1920s, the maison was experimenting with exotic Art Deco creations and, in the early ’30s, it pioneered a groundbreaking new technique called the Mystery Set, by which gemstones could be arranged in a mosaiclike pattern without any visible supports. Its sautoirs, minaudières and brooches quickly became favorites among royals and Hollywood stars including Marlene Dietrich, for whom Van Cleef created one of its most iconic designs, the Jarretière bracelet, in 1937. The story goes that Dietrich gave a handful of her gemstone-studded pieces to Louis Arpels, the brother of Estelle and one of the company’s founders, and asked him to create something special. And so the Jarretière was born: The modernist platinum cuff featured an exaggerated, asymmetrical loop covered in cushion-cut rubies set atop twin bucklelike bands of baguette-and-pavé-set white diamonds. (The piece’s name translates to “garter,” and indeed the design resembles the band worn around the top of a woman’s stocking.) Dietrich famously wore it in Alfred Hitchcock’s 1950 noir thriller, “Stage Fright” (she also insisted on head-to-toe Dior for the role), and to the Academy Awards a year later.

Today, a new Van Cleef creation, the Arche Solaire bracelet, has been designed with Dietrich’s beloved Jarretière in mind. With 41 oval-cut pink sapphires from Madagascar — totaling 57.98 carats — swaths of coral, square-cut diamonds and round mauve sapphires, the cuff forms a figure eight, its rosy pink and magenta gems mimicking the sky at dawn and dusk. “The designs echo each other with their circular aesthetics,” says the house’s C.E.O. and president, Nicolas Bos. “The Jarretière draws on the hand-stitched world of couture with its large loops of precious stones, while the Arche Solaire evokes the infinity symbol or analemma, the shape traced in the sky by the sun if it were observed every day for a year from the same location at the same time.” Timeless indeed.

25 On-Sale Menswear Essentials to Heat Up Your Winter Wardrobe