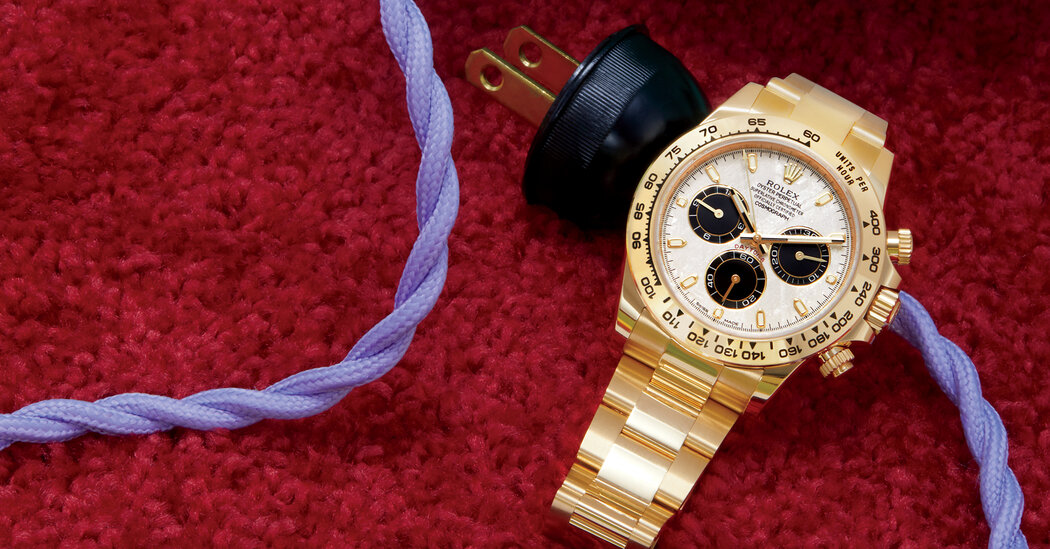 At the turn of the 19th century, Western culture became fascinated with meteors and other astronomical phenomena. Around the same time, two men working 800 miles apart — the Austrian printer Count Alois von Beckh Widmanstätten and Guglielmo Thomson, an English mineralogist based in Naples — made a similar discovery: If one treats a split-open iron-based meteorite with a mild nitric acid solution, a strikingly intricate crystalline grid emerges. Today, the motif is referred to as the Widmanstätten patterns or the Thomson structures, but no matter who gets credit, they are among nature’s most hypnotic creations. Rolex, the Swiss watchmaker, has used meteorite for its dials in the past, backing thin slices of it with brass, but now, the company has reimagined its iconic Cosmograph Daytona with a face made from a solid slab of chemically treated fallen star. Encased in rose gold, white gold or yellow gold (as pictured), the etched surface lends the famously sophisticated timepiece an otherworldly patina — literally — that practically lifts it into the stratosphere. Rolex Cosmograph Daytona, $41,000, rolex.com.

The One Designer Jacket Brand Every Celeb Seems to Own

Taking Gender Out of Watches