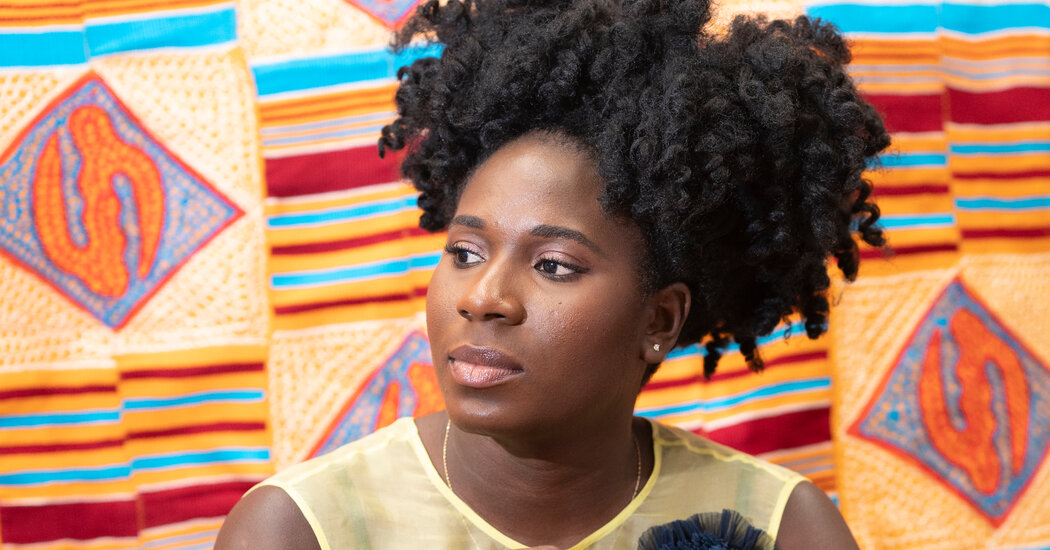 When Saheem Ali, the director of this summer’s Shakespeare in the Park production of “Merry Wives,” thought about which costume designer he wanted to create the clothes for the show, he knew immediately that it should be Dede Ayite. The two have been friends for years, and have worked together on “Twelfth Night” for the Public Mobile Unit, “Fires in the Mirror” at Signature Theater Company and the upcoming “Nollywood Dreams” at the MCC Theater.

In the playwright Jocelyn Bioh’s modern take on Shakespeare’s “The Merry Wives of Windsor,” the setting is Harlem instead of Berkshire, England; its characters West African, not English. Falstaff is a lifelong Harlemite; the Pages are Ghanaian; and the Fords are Nigerian. The costumes play as vital a role in reimagining and breathing new life into this work as the acting, the writing, the sets and more. In his review, The New York Times’s chief theater critic, Jesse Green, said Ayite’s costumes helped the production look “especially grand.”

Ayite, a two-time Tony Award nominee for her work on “Slave Play” and “A Soldier’s Play,” knew that she wanted the costumes to reflect and highlight both the similarities and the differences between the cultures. She and her team sourced fabrics from Kumasi, Ghana, as well as from fabric haunts in Yonkers and the Bronx. She said she hoped that the costumes would add to the production’s celebration of Harlem and other immigrant communities and what contributions, cultural and otherwise, immigrants bring to the places they settle in.

“I’m hopeful that as people get to experience the show and see these Black beautiful bodies and shapes and people onstage, that they truly see them and embrace them and recognize that they exist and they matter,” Ayite said.

She recently spoke about her process, the art of marrying traditional and modern West African styles with modern Western designs and creating costumes that flatter and feel natural on actors with different body shapes.

The Pages and the Fords

The characters Ekua and Kwame Page are from Ghana, and for some of the couple’s clothes, Ayite got woven kente cloth from that country. Madam Page is a traditional woman who still has her finger on the pulse, Ayite said. For one of Madam Page’s dresses, Ayite leaned into a traditional silhouette reminiscent of the 1950s, but it also has modern-day cutouts and design details.

“It feels like an Ankara print, but in some ways feels like an elevated or modern version of an Ankara print,” Ayite said, adding that she chose three Adinkra symbols with specific meanings to add a sense of playfulness to the garment. Those symbols — representing strength and humility; unity; and wisdom and creativity — speak more broadly to Madam Page’s personality and character, which viewers become familiar with throughout the play.

With each costume, Ayite said, she wanted to create layers that symbolize where a character was from and who they are as an individual.

Naturally, the Pages dress quite differently from the Fords, who are from Nigeria.

Ayite dove into her own knowledge of the countries and into a well of research about different styles of dress not only within the two countries, broadly, but also within different tribes. The Nigerian couple, for example, are Igbo.

For every character, Ayite played around with various silhouettes and shapes. Madam Ford’s dress at the top of the show is a modern take on the traditional aso ebi, a type of uniform dress worn as a show of solidarity for celebrations in Nigeria.

Traditionally, Ayite said, “it’s a bit longer, but we shortened it a little bit, so we see a bit more leg.”

To bring to life Bioh’s version of Falstaff, the loud, often clownish and inappropriate beer-bellied player of Harlem, Ayite wanted to create a conversation, through costume, of his Harlem roots and his interactions with his West African neighbors.

In one scene, when Falstaff goes to speak with Madam Ford, he puts on a colorfully printed Stacy Adams shirt that looks as if it has paint speckled across it. Ayite pointed out that the shirt “is very American,” but there are elements of Africanness in his costumes that fit with his African neighbors. Falstaff has a pair of shorts with the print of the common Ghana Must Go bag. The print on the bag — a colorful red-and-white or blue-and-white plaid — has been around for decades.

“It brings me joy just to highlight that as a people, we come from somewhere and the culture is deep, it’s rich, and as much as we might lose certain things, there are essences of it that never leave us,” she said.

David Ryan Smith plays the Senegalese Doctor Caius, whose personality is bold, as are his costumes. He’s educated, has a bit of flair, and he has money. Each of his costumes takes up space and demands attention thanks to the silhouettes and striking colors.

“He wants to be seen,” Ayite said. “He’s a presence that we feel like we need to acknowledge. You can’t miss him.”

Ayite has traveled to several African countries and when she arrived in the United States 20 years ago, she settled in Harlem. These experiences are perhaps why the show’s costumes feel authentic to all the cultures they represent.

The research and her experience come alive with each character, but especially stand out among the younger, perhaps more fashion forward characters, like Anne Page.

She is a first-generation American, who wears clothes that could be seen on West 116th Street and in a viral TikTok post. Ayite explored how being a first-generation young woman could factor into how she would dress. One scene, for example, has Anne in a classic, long white button-down. But atop it is a printed corset that feels both old and new, African and American.

“I changed the paneling a little bit and the silhouette of that corset, so it feels like it’s pushing against culture a little bit,” she said, “so it feels African, but also feels like — in terms of fashion — she has our finger on the pulse because she has access to YouTube, to Instagram, to TikTok.”