Many value investors are struggling to find decent investing prospects in the current stock market. It seems as if the U.S. government is willing to do whatever it takes to bail out large corporations when they mismanage their money, and the Federal Reserve is keeping up its easy money policies, allowing ever-increasing amounts of corporate debt.

This environment is giving many the misconception that stock prices can only ever go up from here. Thus, increasingly high valuations are being accepted as the new normal. There are some stocks that still appear cheap, but they are often cheap for a good reason. Sorting the value stocks from the value traps can be a difficult task.

According to the GuruFocus All-in-Once Screener, a Premium feature, there are still some cheap stocks that the investing gurus are fond of. High guru ownership is a positive sign that these companies are more likely to be value opportunities instead of value traps. For this search, I screened for stocks that have a PEG ratio of less than 1.0, trade at a discount to their GF Value and appear in the portfolios of the highest number of Premium gurus. You can find the full screening results here.

Based on the above screening criteria, the top three undervalued stocks that are the most popular among investing gurus are Berkshire Hathaway Inc. Class B shares (

Berkshire Hathaway’s Class B shares are held by 38 gurus.

More gurus have been selling the stock than buying it in recent quarters, indicating that some enthusiasm for the stock may be waning:

Berkshire trades with a PEG ratio of 0.49 and a price-earnings ratio of 6.65. According to the GF Value chart, the stock is modestly undervalued. Year to date, the stock has gained 25% to trade around $290.34. 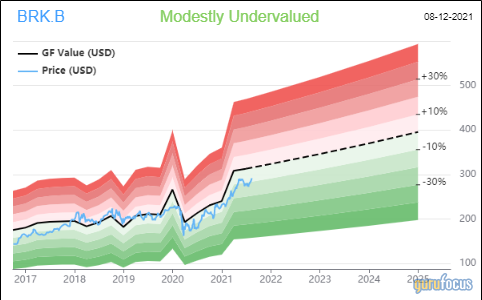 Valuing Berkshire can be a little tricky these days, at least based on traditional valuation metrics. Ever since a change in accounting rules went into effect in 2018, publicly traded companies with equity portfolios must report the unrealized gains and losses from their stock holdings as part of their top and bottom lines. As we can see in the chart below, this has caused Berkshire’s revenue and net income to vary drastically during periods of stock market volatility: 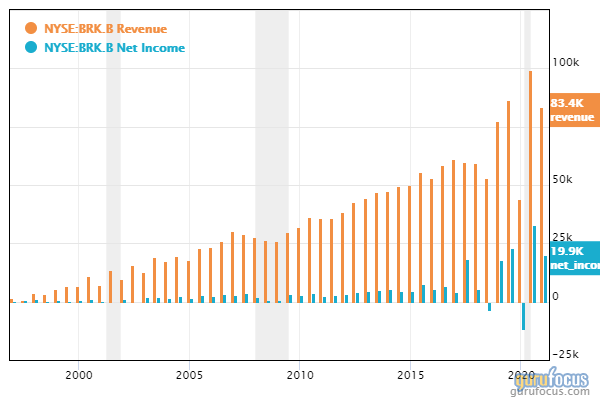 Its insurance businesses saw growth in premiums during the second quarter. For BNSF, earnings came in at $1.9 billion before tax, up from $1.4 billion a year ago. Berkshire Hathaway Energy grew from $533 million to $739 million. The Manufacturing and McLane Company segments more than doubled to earnings of $2.7 billion and $84 million, respectively. Pre-tax service and retailing income nearly tripled to $1.1 billion.

Some fund managers have been selling the stock not because they believe the business is going downhill, but because so much of its profits come from its sizeable equity portfolio. Buffett and Munger have been wary of making large investments over the past couple of years due to a lack of big enough opportunities that meet their criteria, so some are selling the stock to look for higher-growth stocks.

INTC, Financial) is a semiconductor technology company based in Santa Clara, California. The company is the world’s largest producer of PC microprocessors, and its mobile processors have been a key driver of growth in recent years.

Intel is held by 25 gurus. The top shareholders are

More gurus have been buying the stock than selling it in recent quarters, so it seems that enthusiasm for this stock is heating up:

Intel trades with a PEG ratio of 0.75 and a price-earnings ratio of 12.05. According to the GF Value chart, the stock is modestly undervalued. Year to date, the stock has gained 8.9% to trade around $54.27. 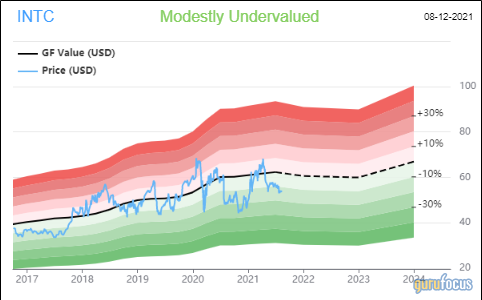 Intel is widely considered the U.S.’s last hope of regaining a leadership position in the advanced semiconductor manufacturing industry. Over the decades, an increasing amount of chip production has been outsourced to lower-income countries in order to take advantage of cheaper labor, and while this has been nice for helping the companies buying the chips to report higher profits, it hasn’t exactly worked well in terms of the ability of U.S. companies to maintain semiconductor manufacturing leadership.

Given the higher chip production volume of foreign competitors and the greater amount of research money flowing towards said competitors, it was really only a matter of time before even Intel began to see the end of its glory days. Quarter after quarter in recent years, Intel has seen revenue for its NSG and PSG operating segments decline. Moreover, Intel has been struggling to meet deadlines and complete projects that it has invested in.

Pressure has mounted from investors calling for the company to outsource more of its chip production in order to provide a quick boost to the bottom-line. A manufacturing turnaround would be expensive, and some believe that an endeavor to play catch-up with international giants such as Taiwan Semiconductor Manufacturing (

TSM, Financial) would be pointless anyway.

The problem with this strategy would be that it would essentially doom Intel to become a company in permanent decline, existing only to squeeze out a few last boosts for investors before beginning a slow but steady downward journey. Intel plans to take advantage of the semiconductor shortage to build a new chip fabrication plant and become a foundry, which is a company that produces microchips for other companies.

For the 2021 to 2026 period, the Semiconductor Industry Landscape report expects the market for semiconductors to grow at a rate of 6% per year, driven by consumer electronics, artificial intelligence, internet of things and advanced customized chips.

LMT, Financial) is an American aerospace and defense giant with interests around the world. It is primarily engaged in the design, development, manufacture, integration and sustainment of various defense-related technologies.

Lockheed Martin is held by 20 gurus. The guru with the biggest stake in the company is

Lockheed Martin trades with a PEG ratio of 0.98 and a price-earnings ratio of 14.15. The GF Value chart rates the stock as modestly undervalued. Year to date, the stock has gained 1.9% to trade around $361.78. 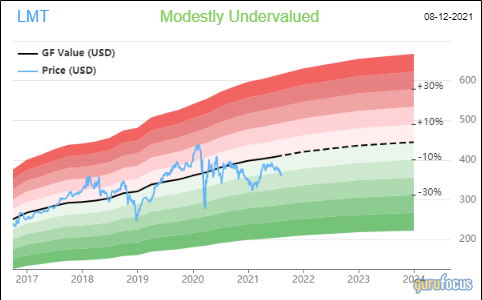 As a defense company operating on a global scale, Lockheed Martin is expected to benefit from increasing government spending on defense and weaponry as well as cybersecurity. Its main customer is the U.S. government, which is where the vast majority of its revenue comes from, so that is a risk to consider, as the majority of the company’s operations could be impacted if it were to fall out of favor for political reasons.

However, some diversity is provided by operating in a variety of industries, including aeronautics (40% of sales), rotary and mission systems (25%), space (18) and missions and fire control (17%). Compared to many other military contractors, Lockheed Martin runs a fairly diversified business.

Additionally, defense spending isn’t really optional, and Lockheed Martin has a long-established reputation in the industry, making its revenue stream generally predictable and reliable. It is unlikely for the company to mess up badly enough for the U.S. government to give all of its contracts to competitors, though of course this is all dependent on Lockheed Martin continuing to design and manufacture top-of-the-line products.

One concern with Lockheed Martin in particular is the affordability of some of its programs. For example, the F-35 has a cost per flight hour of $36,000, which is high enough that the U.S. Air Force has begun to review whether this top technology is worth the high price tag when cheaper options might provide more value for the same money.

While mega-cap military contractors aren’t necessarily growth stocks (except in the case of large-scale warfare), Lockheed Martin has predictable revenue since it mainly operates based on contracts. This allows it to pay a steady dividend. It has boosted its dividend annually for the past 18 years for a dividend yield of 2.85% as of Aug. 12, which is higher than 75% of industry peers.

Looking at the stocks that investing gurus tend to agree on can be a good starting point when looking for opportunities in the markets. True value opportunities seem to be rare these days, but it seems that Berkshire Hathaway, Intel and Lockheed Martin are still trading at a discount to both their earnings and their growth rates, which fund managers are taking note of.

All of these companies have some sort of issues that are causing their low valuations, but the resolution of some of these issues or consistent growth could cause the market to reassess them closer to their fair values.